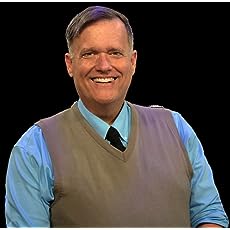 Dan Gookin has been writing about technology for over 20 years. He combines his love of writing with his gizmo fascination to create books that are informative, entertaining, and not boring. Having written more over 160 titles with 12 million copies in print translated into over 30 languages, Dan can attest that his method of crafting computer tomes seems to work.

Perhaps his most famous title is the original DOS For Dummies, published in 1991. It became the world's fastest-selling computer book, at one time moving more copies per week than the New York Times #1 bestseller (though as a reference, it could not be listed on the NYT Bestseller list). From that book spawned the entire line of For Dummies books, which remains a publishing phenomena to this day.

Dan holds a degree in Communications/Visual Arts from the University of California, San Diego. Presently, he lives in the Pacific Northwest, where he enjoys spending time with his sons playing video games inside while they watch the gentle woods of Idaho.
Read more 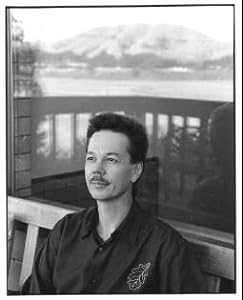 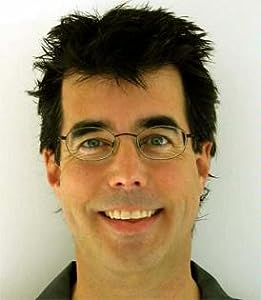 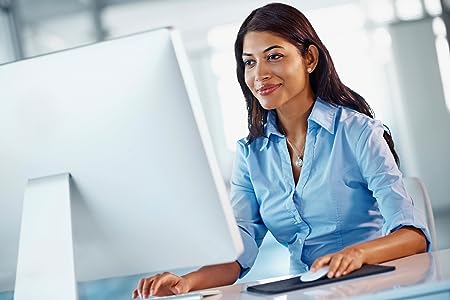 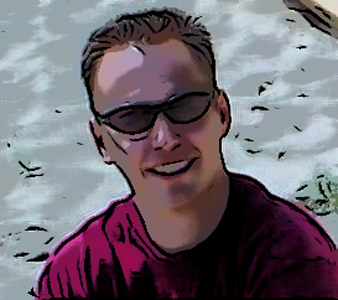 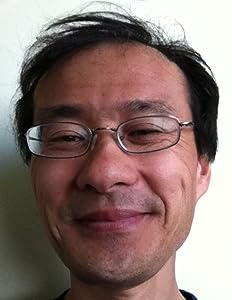 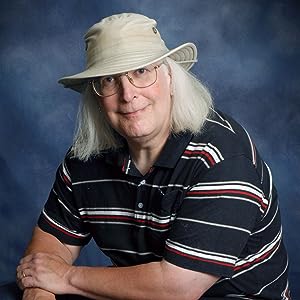 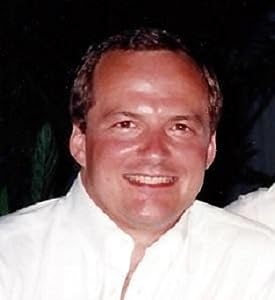 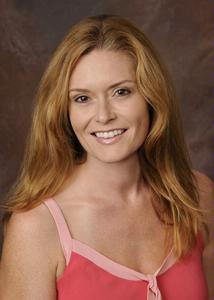 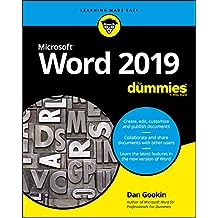 Whether you've used older versions of this popular program or have never processed a single word, this hands-on guide gets you going with the latest version of Microsoft Word. In no time, you'll begin editing, formatting, proofing, and dressing up your Word documents like a pro.

In this leading book about the world’s number one word processing application, Dan Gookin talks about using Microsoft Word in friendly, easy-to-follow terms. Focusing on the needs of the beginning Word user, it provides everything you need to know about Word—without any painful jargon.

If you’re new to Word and want to spend more time on your actual work rather than figuring out how to make it work for you, this new edition of Word X For Dummies has you covered. 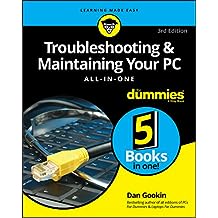 Need a PC problem fixed in a pinch? Presto! Troubleshooting & Maintaining Your PC All-in-One For Dummies offers 5 books in 1 and takes the pain out of wading through those incomprehensible manuals, or waiting for a high-priced geek to show up days or weeks after you need them. Arming you with everything you need to get that pesky PC working for you ASAP, this handy guide walks you through all the steps to restoring whatever's making your PC go rogue —so you can get back to making it work for you.

There's nothing worse than firing up your PC only to discover it's inexplicably unresponsive. With this guide, you'll gain all the skills and insight you need to need to bring it back to life —and to prevent it from ever leaving you in the lurch again.

Your PC problems aren't as big as you think! Take matters into your own hands with the helpful instruction provided inside this book! 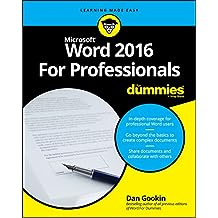 If you're a professional who uses Word, but aren't aware of its many features or get confused about how they work best, Word 2016 For Professionals For Dummies answers all your burning questions about the world's number-one word processing software. Offering in-depth coverage of topics you won't find in Word 2016 For Dummies, this guide focuses on the professional's needs, giving you all you need to know not only do your job well, but to do it even better.

As Microsoft continues to hone Word with each new release, new features are added beyond basic word processing. From using Word to create blog posts to importing data from Excel to expertly flowing text around objects, it covers the gamut of Word's more advanced capabilities—including those you probably don't know exist. Whether you're looking to use Word to build a master document, collaborate and share, publish an ebook, or anything in between, the thorough, step-by-step guidance in Word 2016 For Professionals For Dummies makes it easier.

Essential reading for the Word power user who wants to be more productive and efficient at work, this handy guide gives you the boost to take your skills to the next level. 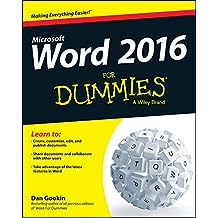 Written by the author of the first-ever For Dummies book, Dan Gookin, this new edition of Word For Dummies quickly and painlessly gets you up to speed on mastering the world's number-one word processing software. In a friendly, human, and often irreverent manner, it focuses on the needs of the beginning Word user, offering clear and simple guidance on everything you need to know about Microsoft Word 2016, minus the chin-scratching tech jargon.

Whether you've used older versions of this popular program or have never processed a single word, this hands-on guide will get you going with the latest installment of Microsoft Word. In no time, you'll begin editing, formatting, proofing, and dressing up your Word documents like a pro. Plus, you'll get easy-to-follow guidance on mastering more advanced skills, like formatting multiple page elements, developing styles, building distinctive templates, and adding creative flair to your documents with images and tables.

If you're new to Word and want to spend more time on your actual work than figuring out how to make it work for you, this new edition of Word 2016 For Dummies has you covered. 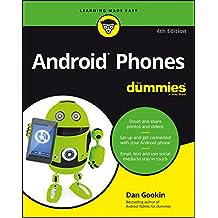 Your smartphone is essentially your lifeline—so it's no wonder you chose a simple-to-use, fun-to-customize, and easy-to-operate Android. Cutting through intimidating jargon and covering all the features you need to know about your Android phone, this down-to-earth guide arms you with the knowledge to set up and configure your device, get up and running with texting and emailing, access the Internet, navigate with GPS, synch with a PC, and so much more.

Whether you're new to Android phones or have just upgraded to a new model, Android Phones For Dummies makes it fast and easy to make your new smartphone your minion. Written by bestselling author Dan Gookin, it walks you through the basics in a language you can understand before moving on to more advanced topics, like dialing tricks to forward calls, working with predictive text, accessing special characters, manipulating the touch screen, and using a USB connection to synchronize your stuff.

No matter how you slice it, life with an Android phone is more organized and fun—and this book shows you how to make the most of it. 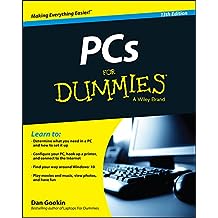 Completely updated to cover the latest technology and software, the 13th edition of PCs For Dummies tackles using a computer in friendly, human terms. Focusing on the needs of the beginning computer user, while also targeting those who are familiar with PCs, but need to get up to speed on the latest version of Windows. This hands-on guide takes the dread out of working with a personal computer.

Leaving painful jargon and confusing terminology behind, it covers Windows 10 OS, connecting to and using services and data in the cloud, and so much more. Written by Dan Gookin, the original For Dummies author, it tells you how to make a PC purchase, what to look for in a new PC, how to work with the latest operating system, ways to protect your files, what you can do online, media management tips, and even basic topics you're probably too shy to ask a friend about.

If you're a first-time PC user at home or at work or just need to brush up on the latest technological advancements, the new edition of this bestselling guide gets you up and running fast. 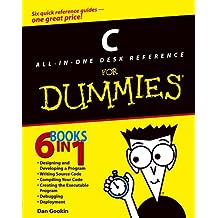 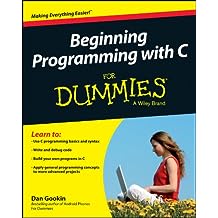 Learn the basics of programming with C with this fun and friendly guide!

C offers a reliable, strong foundation for programming and serves as a stepping stone upon which to expand your knowledge and learn additional programming languages. Written by veteran For Dummies author Dan Gookin, this straightforward-but-fun beginner's guide covers the fundamentals of using C and gradually walks you through more advanced topics including pointers, linked lists, file I/O, and debugging. With a special focus on the subject of an Integrated Development Environment, it gives you a solid understanding of computer programming in general as you learn to program with C.

Beginning Programming with C For Dummies assumes no previous programming language experience and helps you become competent and comfortable with the fundamentals of C in no time. 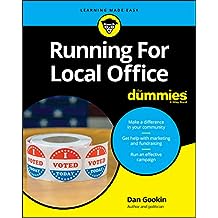 In the land of opportunity, just about anyone who qualifies as an elector can seek public office. Some do it on a whim, some are urged to run, and some want to use their time and talents to make a difference in their local community.

If you want to know how to prepare for a run, which steps to take beforehand, and how the process goes from announcement to campaigning to election day to the swearing-in ceremony—this book has you covered.

Though only one person ultimately wins a seat, nobody does it without a wide network of support. Running For Local Office For Dummies is your ticket to navigating every step on the road to winning that election. 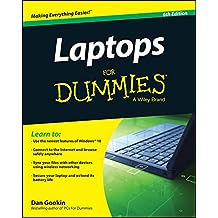 Are you new to the world of laptops? You've come to the right place! Laptops For Dummies covers the many topics and issues unique to laptops, including synchronizing with the desktop, coordinating email pick-up between two machines, remotely accessing the desktop, networking, power management, storage, security, and more. This new edition also provides updates to cover the latest technology, current processors, and steps to update memory and hard drive capacities.

In business—while they spend most of their time in a desktop docking station—laptops are absolutely essential for providing mobility to professionals. In the home, they've begun to replace desktop PCs, as they now offer larger displays, longer battery power, and speeds equal to desktop computers. Plus, you can do just about everything with a laptop that you can do with a traditional desktop, minus the big, bulky machine and multiple cords. If you're just making the switch over to a laptop, this hands-on, easy-to-follow guide makes the transition easy!

Whether you've never logged onto a laptop or are just looking to stay up-to-date with the latest information on operating systems and software, Laptops For Dummies has you covered. 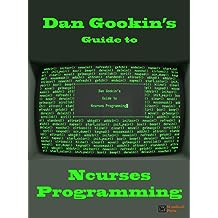 Dan Gookin's Guide to Ncurses Programming Sep 5, 2017
by Dan Gookin
( 13 )
$5.12
Get up and running quickly with Ncruses programming. This tutorial covers all the basics, from configuring Ncurses to coding multi-window, full-screen applications for the text mode, terminal window. You must have a foundation in C programming and be familiar with the terminal shell, such as bash.

This book has all the information and entertainment you'd expect from a Gookin book. From the author and creator of the original For Dummies title, "DOS For Dummies," as well as multitudinous other books, including "Beginning Programming With C For Dummies."
Read more
Other Formats: Paperback 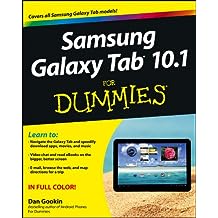 A vast improvement over the original Galaxy Tab, the 10.1 uses the latest version of the Android operating system and is a 4G LTE mobile device. These upgrades—along with many others, including the better screen quality, better web browsing with Flash, and better multitasking capabilities—are all covered in this fun and friendly guide to the Samsung Galaxy Tab 10.1. Everything from how-to topics to the most useful features to helpful tricks and techniques, this practical guide shows you how to get the most out of this cutting-edge device.

Samsung Galaxy Tab 10.1 For Dummies is must-have reading for anyone who wants to go beyond the basics and explore another galaxy of tablet computing!