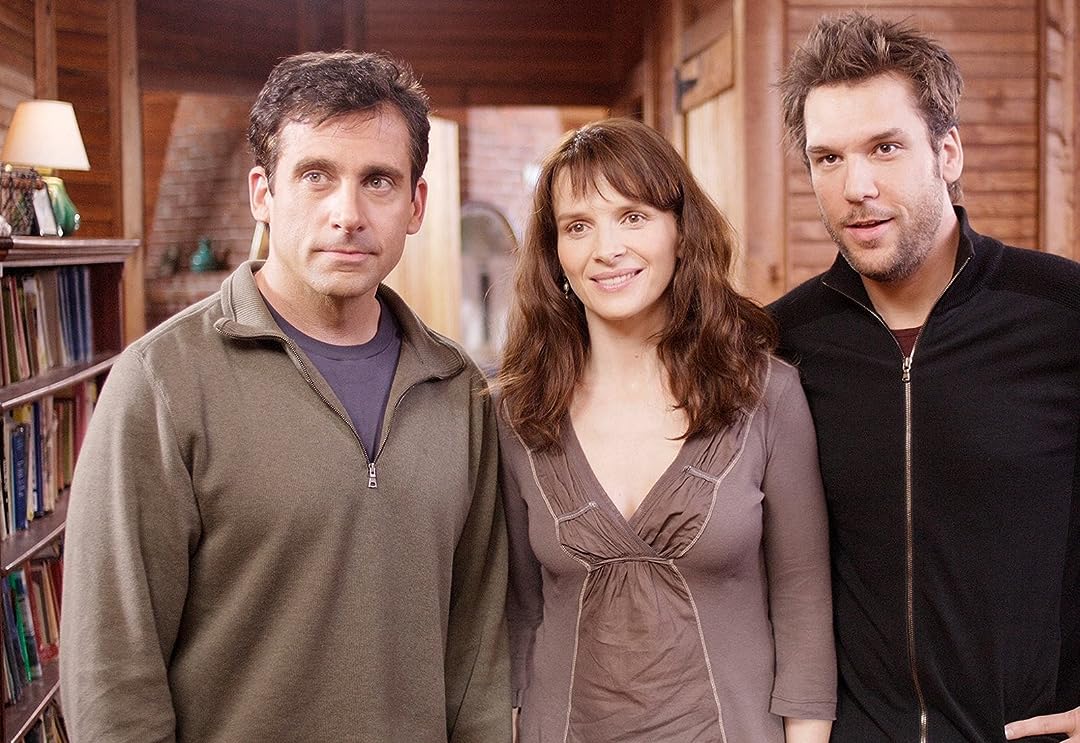 EstherReviewed in the United States on July 20, 2017
5.0 out of 5 stars
Great movie for a night at home
Verified purchase
This movie evokes a distinct sense of nostalgia for me. I love the family vibe created in the film. The majority of the film is set in a family beach cabin in New England and there are a ton of kids and grand-kids piled around everywhere playing and having a typical family experience.

Dad is a widower with three daughters. They are on their way to a family reunion at Grandma and Grandpa's cabin in New England. A tricky situation arises when the cute woman he flirted with at the book store turns out to be his brother's new girlfriend. There is the silliness you would expect from a Steve Carell performance, but it isn't obnoxious. The movie still has a deep and abiding sense of family and emotional growth. Everyone has pain and loss and this is a great movie to see someone dealing with that in a flawed/normal way. It has the happy ending you want and is a nice cozy movie to watch when you need a shot of optimism in the room. The music by Sondre Lerche is resonant and homey. Dane Cook was in the movie, but he managed not to ruin it. Though the dance scene with Emily Blunt was awkward and really a part of the film I don't mind skipping over.

This film is appropriate for kids about 12 and up. There are some wonderfully funny scenes as Dan's second daughter screams and cries when she is told she can't spend the week with her boyfriend. Great family film. I only wouldn't have my younger kids watch it because there are some frank discussions of sex, though nothing too offensive, just stuff I would rather introduce them to in my own time.

SuzschexyReviewed in the United States on May 2, 2017
5.0 out of 5 stars
Sweet romantic dramedy about love after loss
Verified purchase
One of my favorite movies of all time. Sweet, romantic, funny and sometimes sad. This is the story of a widower with 3 daughters who spends a weekend with his large extended family. He meets a woman and there is instant chemistry for both of them but there's a catch. You must watch to find out. What I really love about this movie is the depiction of a loving family that actually gets along for the most part. They truly love and support each other and there is no belittling or sniping or scheming against each other. Plus, the house where the family spends the weekend is absolutely incredible. What a gorgeous place! It was nice to see Steve Carell his usual funny self but in a more adult way. No gross-out comedy here.
10 people found this helpful

ANNReviewed in the United States on December 31, 2017
5.0 out of 5 stars
A great light hearted love story
Verified purchase
Despite the sometimes hokey dialog, this film is a great escape. I love the gorgeous east coast waterfront scenery and the very sweet love story. The movie depicts what is probably not your family, but the extended family you wish you had. And therefore, the film has a comforting quality to it as you imagine what it would be like to have these perfect parents and devoted siblings. Steve Carell is great in this light-hearted dramatic/somewhat comedic role that does touch on some deeper themes (he's a widower) but doesn't stay there long and is not the main focus of the movie. I admit I've watched it more than once as it's always good when I'm in the mood for feel-good movie.
3 people found this helpful

RosieReviewed in the United States on October 24, 2015
5.0 out of 5 stars
A Really Likable, Charming Film
Verified purchase
This is one of those films that you might have heard of but never saw or, like me, saw it way back when, enjoyed it then, and wondered, "If it was as good as I remember it being, then why wasn't a bigger deal been made of it?" So I purchased it and watched it again and, yep, it is that good.

Steve Carell plays Dan Burns, a widower, advice columnist, and father of three daughters. He's struggling from the fairly recent loss of his wife and with raising his girls and decides to take the kids on a family retreat to a big cabin on the shores of Rhode Island. It's a multigenerational event, with Dan's parents, played by Dianne Wiest and "Frasier"'s John Mahoney (who are great, by the way), his brothers, sister, and their families all gathering together at what appears to be the Thanksgiving holiday weekend. When Dan's mom sends him into town to pick up a newspaper and take a breather from the family, he meets a lovely woman, Marie (Juliette Binoche), and after a humorous encounter, becomes smitten, and she with him.

It turns out that Marie, however, is attached to someone else, and that someone is Dan's brother, Mitch. But Dan doesn't find this out until back at the cabin, when Mitch (played by Dane Cook) introduces Dan to Marie. Dan and Marie keep their attraction under wraps and try to dissuade themselves from falling for the other, but it's apparently too late for that.

Dan in Real Life offers up some comedy, some pathos, and a lot of sweetness but it never gets cloying. It's smartly written and very well acted and the characters are believable, even if the scenario is a bit contrived (but it's done much, much better than the mixed-up romance of Luke Wilson and Sarah Jessica Parker in The Family Stone).

After Foxcatcher and other more-serious-than-funny roles, Carrell, it's now known, can play it straight as well as funny, but this movie came at the height of The Office, when people maybe weren't yet willing to see "Michael Scott" be semi-serious and sensitive. We know better now.

Laura M.Reviewed in the United States on December 6, 2016
5.0 out of 5 stars
Sweet, funny, and a great portrayal of family love and loyalty.
Verified purchase
A great story, with terrific actors to bring it to life! I've watched it easily 5 or 6 times (I own a copy!), and it doesn't get old, just more charming. Dan is a wonderful character, a loving father trying his best to navigate the new family landscape left to him and his daughters after his wife's death. His girls are well-drawn young ladies, with their own personalities that play perfectly into the overall story. When they travel to Dan's family's summer home to help get it squared away for the end of the season, the mix of personalities gets even richer. The love, emotions, gentle teasing and rivalries among family members ring very true. Into this mix comes Marie - who Dan meets by accident, falls for, and then discovers is...his brother's newest girlfriend! Hijinks ensue - and it's so much fun to watch the sparks fly! Original music and lovely locations (the family home, a bowling alley(!), and the coastal setting) just add to the overall quality and help create the perfect moods to enhance the various parts of the story. To me, a truly feel-good flick.
5 people found this helpful

Amazon CustomerReviewed in the United States on May 2, 2020
3.0 out of 5 stars
Review of Cara's Upper Lip
Verified purchase
Good production values, nice music, flowed along fairly smoothly... but could not watch the adolescent daughter Cara with her over-inflated upper lip and shrill stereotypical female-teen bitchiness. I could even get past her nasty noise... but cannot watch a girl that looks like she inflated her upper lip with a bicycle pump. What the hell is wrong with the doctors that abuse these misguided women's faces? I hope we get past this fad soon because there aren't many women left that don't pump-up the volume on their upper lip. A little -- sexy. A lot -- ridiculous.
2 people found this helpful

LuluByReviewed in the United States on May 18, 2020
5.0 out of 5 stars
Casual (great) acting with charisma
Verified purchase
I wasn't expecting to like this movie as much as I did. Steve is such a great actor. Some of the others casted I might have chosen more dynamic role models (his dad wasn't particularly dynamic) but still a fine performance. I hated how sassy the girls were to their dad, but maybe that's a real life mimic? I loved how real he acted. When the "pig-face" showed up and the passion that was at the restaurant, was so palpable! Very warm movie. And no sex or too much kissing! Cleaner fun!
See all reviews
Back to top
Get to Know Us
Make Money with Us
Amazon Payment Products
Let Us Help You
EnglishChoose a language for shopping. United StatesChoose a country/region for shopping.
© 1996-2021, Amazon.com, Inc. or its affiliates