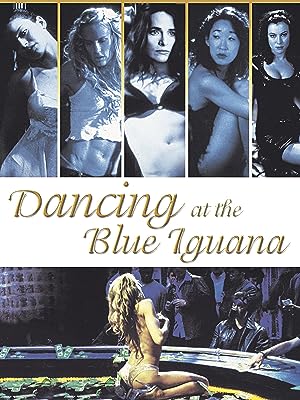 Dancing at the Blue Iguana

(299)
5.72 h 3 min2001R
At the Blue Iguana, LA's most notorious strip club, the lives of five exotic dancers converge, clash and ultimately bond over the course of one week. This glimpse into the oft-misunderstood world of the strip club bares each girl inside and out, both onstage and off, providing an insight to the story behind the dance.

Buddy1492Reviewed in the United States on August 22, 2016
5.0 out of 5 stars
Much better than you might expect
Verified purchase
I watched this thing a second time and it turns out it's a darn good movie. The first time I was paying attention to the stories of Jasmine and the poet, Angel and the Russian, and the rest sort of slipped by me. The second time, the theme comes through loud and clear: humans trying and mostly failing to connect with each other. From Jessie's phone call at the start to her singing near the end. The final scene with the club owner and his assistant walking down the street makes sense. While Angel and the Russian have their lap dance, they are talking but we can't hear them. Sandra Oh (Jasmine) gives a great performance through the whole thing.

It would be easy to dismiss this as just an exploitation of women's bodies. For me all the bare breasts were fine, but this movie has a lot more in it. Very good acting and cinematography combine with a good story to make a film that is well worth watching.

Carol LynnReviewed in the United States on June 7, 2021
1.0 out of 5 stars
Tiny unconnected subplots and not much else
Verified purchase
I will watch the stupidest b grade movies in the name of actresses I love- but this one was truly garbage. I love Jennifer Tilly, but she spends most of the movie strung out and shrieking obscenities. I love Daryl Hannah, but her character is so painfully dim witted that every scene with her is almost unbearable. The dialogue is sloppy and the background of each character is so vague and stunted that I found myself totally univested. I understand the message of the movie was meant to be about missed connections, and the futility of feeling unable to climb out of your situation or run from your 'lot in life'- but there are MUCH better movies that get to the heart of that point. If you ask me, this one is a hard pass.
One person found this helpful

Howard LovelyReviewed in the United States on June 15, 2016
4.0 out of 5 stars
A Thinker Film....
Verified purchase
Thought provoking about the lives (internal & external) of individuals that dance at clubs and the patrons that frequent the club.
The film illustrates the "normal" character of the many individuals just like everyday people who do not dance in clubs.
Illustrated in the film are personal character traits that do not necessarily fit into the stereotypical category of "degenerate" that society tends to impose on nude dancers.
This "less than" attitude was indicated by the new found "love" interest of actress Sandra Oh once he saw her dancing on stage,...or the scene with the old Man and his wife's opera glasses and the way the club owner treated him and the indication that the old man was actual thing of his deceased wife while watching nude dancers.

Amazon CustomerReviewed in the United States on July 25, 2018
4.0 out of 5 stars
I really liked this movie
Verified purchase
I really liked this movie. I didn't realize there was no script and everything was adlibbed until after I watched the movie. The sad, difficult stories of all the girls drew me in and made me root for them. The downer is, nothing was wrapped up nicely with a bow. None of the stories ended happily ever after, but isn't that life and true for most women in this line of work? There were funny moments and sad moments. I will be thinking about this one for a few days.
One person found this helpful

Sarah BellumReviewed in the United States on January 19, 2007
4.0 out of 5 stars
Smoke yourself thin
Verified purchase
Prior to watching this, I expected something on par with "Striptease" or "Showgirls," which are films about stripping that also attempt to legitimize their titillation by tossing in dramatic subplots. Even with earnest intentions, films of this sort usually end up being clichéd and disappointing. Adding to my trepidation was the fact I had never heard of this film, which was released in 2000, prior to 2006. I finally took a chance on it and gladly admit that it really drew me in and convinced me to care about the characters. Like most people, these women only want to find love and something real in life, yet have lost their centers. Indeed, it is the actresses' portrayals of these characters that make each disappointment and set-back so painful to watch. Sandra Oh really moved me with her performance as Jasmine, a would-be poet who sabotages her own happiness because she has come to believe she cannot trust anyone, including herself. Her performance as a sensitive, intelligent person is the most tragic among these lives because she lacks the confidence to escape her current situation, even though she easily could. As Angel, Darryl Hannah is wonderful as a helplessly dim and hopelessly optimistic dreamer. (She also looks unbelievably fit!) Jennifer Tilly is also very good as the out of control Jo, a woman who tries desperately to win in a man's world, but comes to realize the playing field is not level. Charlotte Ayanna is remarkable as Jessie, an eager to please naïf, who has not yet had her spirit crushed by the weight of the world. Come to think of it, it does all sound very clichéd and there really isn't much of a plot to tie it all together, just several subplots. Nonetheless, the acting is exceptional, made all the more impressive by the fact much of it is improvised. (And yes, the ladies here all smoke, which would ostensibly account for their trim appearances) I enjoyed the entire two hours and would recommend it to anyone looking for a good character study without the hindrance of a plot. The DVD is quite decent, with a very good transfer, optional subtitles and some alternate scenes. This is a bargain for the price.
40 people found this helpful

talbot vilnaReviewed in the United States on August 26, 2018
2.0 out of 5 stars
Angel, the Forrest Gump of strippers
Verified purchase
As expected script that deals with strippers and their lives You'd like to see certain characters and their stories develop a little more. That's what makes the film lacking.
Daryl Hannah, aka ditzy Angel, makes out the best when she's left a small fortune by a Russian hit man. He mostly sees her from his hotel room in the distance while she's in the back lot of the club grabbing a smoke. Like the Forrest Gump of strippers. LOL !!!
4 people found this helpful

MaristellaReviewed in the United States on January 18, 2017
5.0 out of 5 stars
A Movie About Unconditional Love and the Deep Inner Pain of Being a Human Being
Verified purchase
I think I caught parts of this on TV once or twice. I am so glad I watched this. It is a really good movie that deals with many themes about what people really want and need. This movie brought forth how people want and need to be bonded to each other and how important unconditional love is. I loved the characters and the character development and I am dying to know what year this was made.
6 people found this helpful

delta500Reviewed in the United States on September 14, 2021
1.0 out of 5 stars
Messed up version
Verified purchase
For some reason whoever produced this version tried to squeeze it into the wrong screen format leading to grotesque distortions of the image and loss of frame. Very disappointing.
See all reviews
Back to top
Get to Know Us
Make Money with Us
Amazon Payment Products
Let Us Help You
EnglishChoose a language for shopping. United StatesChoose a country/region for shopping.
© 1996-2021, Amazon.com, Inc. or its affiliates