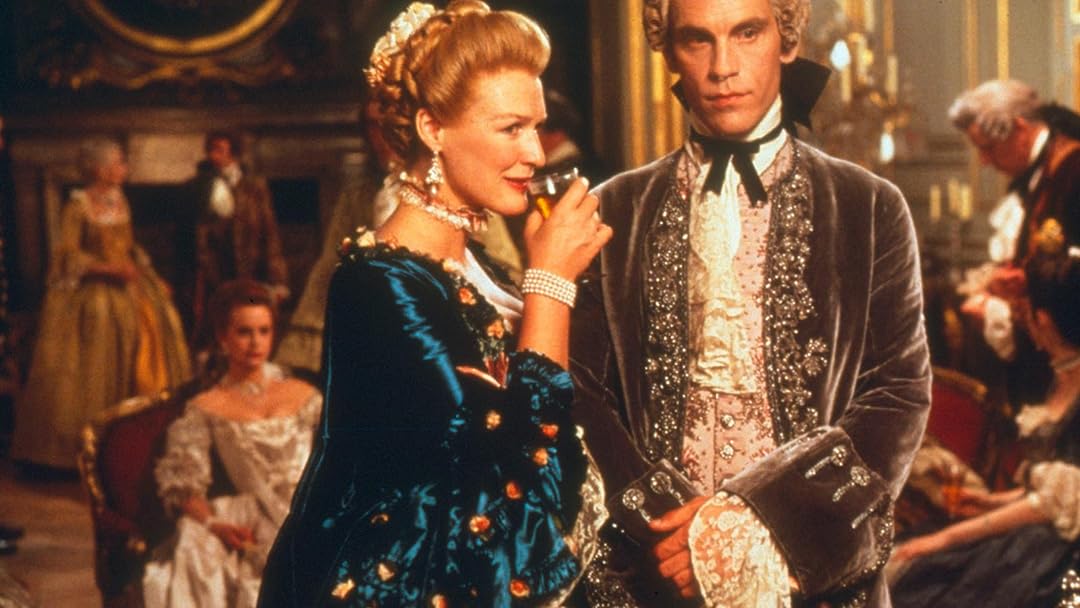 Stephanie 🖤Reviewed in the United States on August 27, 2019
1.0 out of 5 stars
Cliche' as all get out.
Verified purchase
I absolutely LOVE historical pieces especially ones that take place in one of my favorite time periods so I jumped at the chance to watch this when I saw it while browsing on prime video but OH MY GOD the story is so bland and cliche' it hurts my soul. Womanizing man with loose morals (John Malkovich) makes a bet with woman who's just like him (Glenn Close), the bet is for him to seduce and bed a girl with high morals who's not easy and is a "challenge" (Michelle Pfiffer) and in the process man falls in love with girl. There's more details obv but this cliche' story has been done countless other times in movies, tv shows etc so I really don't feel like talking about all of it lol. Tbh I could've forgiven the dullnesss and cliche'ness of it if the romance between Malkovich and Pfiffer had been realistic and if there had been chemistry between them but unfortunately they had neither. John Malkovich is a great actor no doubt but him and Michelle Pfeffir had ZERO chemistry on screen and their romance made no sense either. Went from lies and dislike right into love in 000.1 seconds, there was no build up no bonding no nothing. Also I hate how sexist the ending is, yes it's set in the 18th century but GOOD GOD can a woman ever win? John Malkovich's character was a sleezeball for no reason other then because he was a man and could do what he wanted but at the end he's all goody two shoes and we're what supposed to think he's automatically good now because he loves someone? 🤔 At least Glenn Close's character had perfect reasons for why she acted the way she did and did the things she did she went through hell and was a woman during a time when we were nothing.. both we're bad but one was bad for good reasons and the other was bad for nothing more then power but oh no she still loses.. makes no sense 🤦🏻‍♀️ *I know this is completely irrelevant but Michelle Pfiffer's eyes throughout the movie really bothered me, they always looked blood shot like she had burst blood vessels*

So all in all I wouldn't reccomend this movie. I love the time period the movies set in, love the settings/costumes and has a good cast but the lack of chemistry and realistic romance on top of an already cliche' story really makes it boring plus the ending sucked.. it actually annoyed the heck outta me 🙄

PetrosReviewed in the United States on May 14, 2015
5.0 out of 5 stars
Cuts like a knife!
Verified purchase
Dangerous Liaisons has a very particular rhythm which moves like a mathematical calculation. Frears has chosen fantastic music to accompany the style and enhance this aspect of the film. Even the expressions from the actors which are often caught in their playful demeanour are carefully timed in the length of the shot and in the musical cue when needed. There is also a humour constant throughout the film which dramatically magnifies the sting at the end of the story. The script may fraternize with the amoral characters in their sadistic plotting and appalling behaviour but it has a lot to say about the values and weaknesses of all the characters, no matter with whom you sympathize. This is a very multi-layered story structure which is lost on most people because they lack experience and perception on the human condition. I for example only sympathize with Glenn Close’s character, who is a modern woman trying to keep her power and individuality in a man’s world. This unfair balance in her world is both supported by ignorant men and equally weak, ignorant women. The last scene of Glenn Close is played beautifully by this gifted actress and gets my compassionate vote. I have understood her cruelty throughout the movie and have forgiven her but society is hissing and the end seems near.

I find the style of the film so unique and on its own terms that there really is nothing I can think of to compare in cinema. Dangerous Liaisons is extremely enjoyable and very entertaining but the serious tone and comment underlining the film makes it also a rather masterful experience, which many audiences miss when viewing this masterpiece.

joel wingReviewed in the United States on November 2, 2021
4.0 out of 5 stars
A plan to destory the reputations of two good women
Verified purchase
Revenge, intrigue and seduction. Those are the topic of Dangerous Liaison set in 18th Century France. Glenn Close and John Malkovich represent the idle rich who come up with a plan to destroy the good standing of two women Uma Thurman and Michelle Pfeiffer. One is known as a strictly moral and religious woman so sleeping with her would be a conquest. The other is meant to get back at a former lover. The draw is to watch their maneuvering, their sly talk, what they are willing to do, etc. There’s also the game of wits between Close and Malkovich. He comes off as a smart and devilish playboy and She as the real mastermind always thinking about power over others. The two go through their own twists and turns as well to see who can win out as the most evil and mischievous.

K. J. EvansReviewed in the United States on February 14, 2018
5.0 out of 5 stars
Unmissable Intrigue - and then she chooses, "War"
Verified purchase
This film is a true classic. No, REALLY. Glenn Close and John Malkovich stun with their performances. And Michelle Pfieffer is just unforgettable. I have honestly tried to read the book (in English and French) without the success of being able to finish it. Just so convoluted. But the film makes everything clear: it's one of those that - no matter how often you see it - you can envision that it just might end differently!
10 people found this helpful

Kindle Lovin' ToniReviewed in the United States on September 18, 2012
5.0 out of 5 stars
A Masterpiece!
Verified purchase
This is a review for the blu-ray. I noticed Amazon likes putting both dvd and blu-ray reviews together for the same movie and I wanted to be very clear within my review.

I adore this movie. I have both copies and without question the blu-ray is an astonishing transfer over to blu-ray. Everything is gorgeous. The color, the brightness, the costumes, the skin tones, the scenery all pop with sharpness and beauty. Some one stated that both the dvd and blu-ray look the same, that is absolutely not the truth. I don't know what type of tv this person was watching it on but the dvd version and the blu-ray version look completely different. I watch on a 1080P HDTV... and my opinion (and experience as I have owned 720P HDTV's also) is that there is no other way to watch a blu-ray movie but in 1080P. Indeed worth every penny to step up to the blu-ray version.

I don't like telling the story of a movie in my review of it but I will say this... It is definitely a head-shaker to watch cruelty in action in this film but it is not far from the truth of how some human beings, in the real world and not just on film, can be and are. BUT, truly what goes around comes around without question.

A classic. I admit, I can only watch this film once in a while (due to the nature of Close and Malkovich's character's) but I love to watch it each time I do.

GatorgirlReviewed in the United States on December 2, 2015
5.0 out of 5 stars
A wicked movie
Verified purchase
What a great movie. This movie shows what happens when boredom sets in for the privileged in old world France. How two diabolical people who are made for each get bored and decide to manipulate the lives of people who are in their circle of friends just for the fun of it. But things as usual do not go as planned. The count (John Malkovich) falls in live with his prey (Michelle Pfeiffer) unexpectedly and this infuriates his ally in crime (Glenn Close). So she sets out to destroy him. Her line of "war" is chilling. But he outwits her in the end and she ends up exposed and humiliated. Keanu Reeves and Una Thurman give great performances as young lovers whom John and Glenn involve in their wicked scheme just for the fun of it. I can see why it was an Oscar-winner. I would recommend this movie highly. The script and dialogue are wonderful and the actors play it to the hilt. Enjoy it over and over. Great period movie with beautiful scenes and costumes. 12-2-2015
.
8 people found this helpful

Lana AndersonReviewed in the United States on January 10, 2020
5.0 out of 5 stars
18th Century Love and Intrigue
Verified purchase
The Marquise de Merteuil (Glenn Close) and the Vicomte de Valmont (John Malkovich) display the petty jealousies and jaded insouciance of life in France's royal court in the 18th century, casually ruining the lives of de Merteuil's young romantic rival (Uma Thurman), the music teacher (Keanu Reeves) for whom she secretly pines and the upstanding Madame de Tourvel (Michelle Pfeiffer). But when actual romantic feelings begin to surface, their games take on a more treacherous air.
2 people found this helpful

LSTARReviewed in the United States on April 11, 2015
5.0 out of 5 stars
I love this movie
Verified purchase
I love this movie. It provides a good glimpse into the world/historical time period that the characters lived in and how limited the roles for women were. Their only power was there reputation. Glen Close did a wonderful job depicting how such a strict social environment can corrupt a woman. All of the actors were great. Intrigue, manipulation, malice, revenge and betrayal are all part of the plot. A great movie.

I have to add an update to this review. While I still love this movie, I can't stand movies that scenes have been deleted from. I am very disappointed in the companies that think their audiences have such a small attention span that they won't notice that scenes, however trivial they may seem to the plot, have been deleted. I just bought this movie from Amazon and now I will have to try to sell it and go in search sites that guarantee uncut movies. I have no interest in interviews with directors or actors. All I ask is that the work itself, is preserved in it's entirety, whether it is a work of art or simply entertainment. Does anyone know where I can find DVD's that are guaranteed to be uncut?
7 people found this helpful
See all reviews
Back to top
Get to Know Us
Make Money with Us
Amazon Payment Products
Let Us Help You
EnglishChoose a language for shopping. United StatesChoose a country/region for shopping.
© 1996-2022, Amazon.com, Inc. or its affiliates