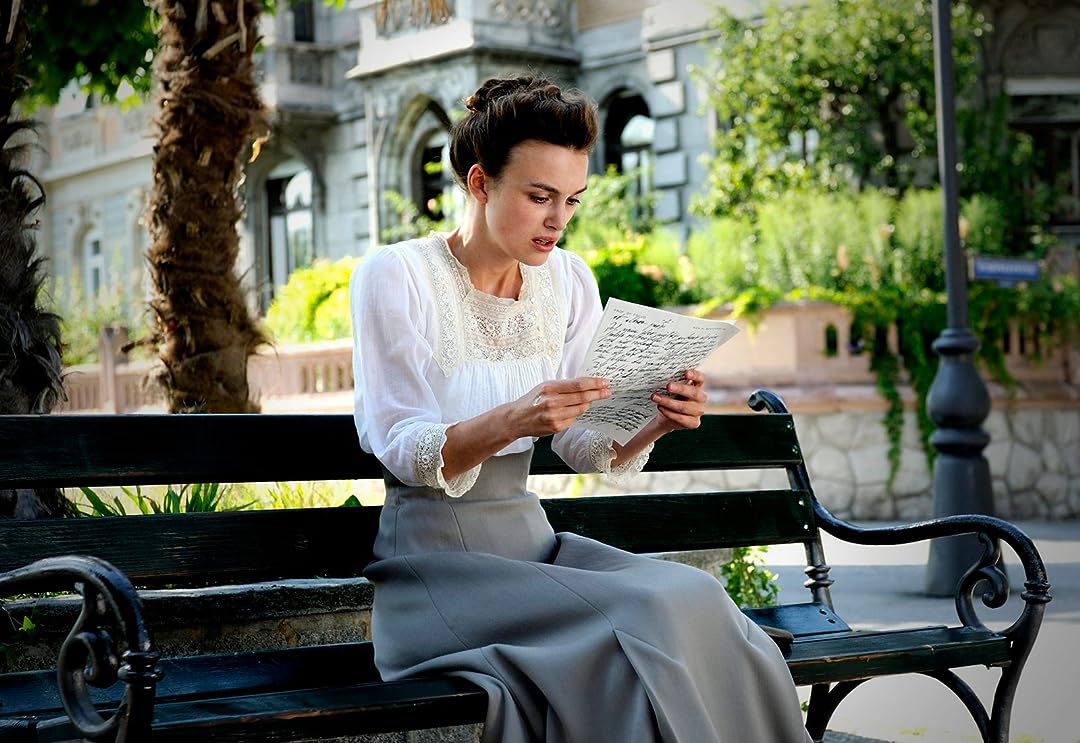 (1,627)6.41 h 39 min2011X-RayR
1904: Dr. Carl Jung takes on a fascinating female patient, who responds to his psychoanalysis so well that they fall in love - but the affair leaves him at odds with his mentor, Sigmund Freud. Based on a true story.

MeggoReviewed in the United States on September 23, 2017
4.0 out of 5 stars
Worth a watch
Verified purchase
Considering the enormity of taking on the lives of Jung & Freud, this is a good movie. I would love to see it in it's unedited form. Perhaps in an effort to cater to our present day's shortened attention spans, it was overly and sometimes not skillfully edited. It was as if there were great struggles on the editors' part as to what to leave in and what to omit. It does capture the essence of the split between Jung & Freud. It also clearly conveys the "mans' world" of that era which makes the presence of Ms.Spielrein all the more remarkable. It also conveys Jung's willingness to be vulnerable in his turmoil---and Freud's need to be the superior one in their relationship. That struggle was clearly conveyed. The imagery was lush and beautiful. Also the sensitive and intuitive nature of Emma Jung was made clear. This is a complex topic made in present day with poetic license no doubt. It's worth a watch--if you can watch it without getting tangled up in ideology or moralizing.
24 people found this helpful

AMZ Prime UserReviewed in the United States on January 11, 2019
3.0 out of 5 stars
Sabina: first woman practitioner of psychoanalysis
Verified purchase
I wanted to watch a adult/skin whatever type of film this one was spoiled for me in an episode of Family Guy as “that spanking movie.” However; it is worth the money and the time b/c Kiera Knightly is very persuasive as Sabina; the first psychoanalytic patient of Dr. Jung, and a subsequent patient of Dr. Freud. She is a case of female hysteria, intelligence, beauty; but working against her favor are her circumstances of being Jewish in Vienna right before the start of WWII. She insisted on practicing psychoanalysis herself, with great persistence; until she was murdered by Nazi occupied Austria. This film is based on the true story of Sabina, and how she remained in Europe under the care of Dr. Freud with patients of her own until her death at young age. It also addresses the deviant and amateur behaviors of Dr. Jung; who marries for fortune, breeds for eugenics, and flees Europe at the eve of WWII with his family for his in-laws’ place in Nantucket. He (against the wishes of his wife) offers to take Sabina with them out of guilt; as she was his mistress but she has the courage and fortitude to disengage herself from her emotional love for Jung. I believe this film to be a lot more than a skin flick; but it is rated R for some good reasons.
10 people found this helpful

Chase GeiserReviewed in the United States on February 12, 2018
5.0 out of 5 stars
Freud and Jung Fans Unite
Verified purchase
Great for those with an interest in psychology. Particularly those interested in Jung or Freud. The acting is outstanding and the subject matter compelling. This movie is not for those who are merely interested in some lightweight entertainment; this movie is an intellectual exercise. I recommend watching with someone who you enjoy good conversation with. This will certainly catalyze that.
18 people found this helpful

Elise A. MillerReviewed in the United States on August 29, 2016
3.0 out of 5 stars
Could Keira reign in the twitching?
Verified purchase
Love stories about Jung and Freud and psychoanalysis. Always game to dive in. But I didn't get a chance to finish this movie. I ran out of allotted time and didn't find it engaging enough to re-rent. If Keira Knightly didn't act like she had cerebral palsy, I might have paid another three dollars and watched through to the end. Fassbender and Viggo were wonderful, as were the setting, costumes and story. But Knightly's acting—what the hell was up with that? Even IF convulsing, neck-craning, stammering, eye-darting and jaw-jutting were physical symptoms of abuse for the real Sabina Spielrein, all that twitching was totally distracting and unnecessary. How could Cronenberg allow that? Is he that enamored with her? Keira Knightly seems to act from the outside in. She puts a character on like a (clown) costume instead of inhabiting an emotional core and going from there, so that the audience will actually believe she's in such a state. Physical twitchery would have to be a typical symptom of such abuse for it to register as anything resembling plausible. Is it? Have I missed something in my 47 years?
30 people found this helpful

TommyCobbsReviewed in the United States on May 19, 2020
1.0 out of 5 stars
Mediocre Movie and Amazon Reviewing Methods
Verified purchase
I thought the movie was worth 3 stars, but I am most frustrated by Amazon for no longer showing what media type (DVD, Blu-ray or prime video) was used to view movies. How as a consumer can I understand a review if the media type is not displayed in the reviews?
As an example, if a reviewer writes that the picture quality was poor, I have no idea what medium the movie was viewed.
I find it very confusing in purchasing when all media types are lumped together, and I sure do hope that Amazon resolves this problem. (I use an iPad and iPhone for purchases, and the problem exists in both devices.)
I saw this movie in Blu-Ray, and the picture quality was good.

Doc WoodReviewed in the United States on November 8, 2016
4.0 out of 5 stars
The Method that Changed the World
Verified purchase
I will say that it's badly named: It's not the method (psychoanalysis) that is dangerous, but Jung's serial seduction of clients that was the problem.

That said, this is good enough that I recommend it to my psychology classes every year. Reasonably true to the facts even though not intended as documentary, well acted, beautifully photographed, and tragic.

Okemos56Reviewed in the United States on January 14, 2021
3.0 out of 5 stars
The subject is fascinating; the movie not so much
Verified purchase
This is the story of Sabina Spielrein who overcame an abusive father, a psychiatrist (Jung) that had a love affair with her, and a psychiatrist with delusions of grandeur (Freud) to become the first female psychoanalyst. There is lots of intelligence in the script but a lot of dullness in the movie. The two lead males do not leap of the screen. Knightly is good for the most part, but I dislike cathartic scenes that solve (or seem to) all problems in general, and the one Knightly does is no exception. Others may disagree. But it is the male characters that failed.
One person found this helpful

PhredReviewed in the United States on March 9, 2013
3.0 out of 5 stars
Can intellectuals have fun while having kinky, out of bounds sex?
Verified purchase
It seems that those naughty sophisticated intellectual Europeans of 100 years ago were not casually naughty, they spent a lot of time thinking about it. On the historic side this movie introduces us to a young Carl Jung Carl a doctor first experimenting with the new Freudian psychoanalytic methods, his older father figure Sigmund Freud and the wildly hysterical Sabina Spielrein. These are three historical figures two known to us, one almost forgotten. In fact the three of them had some type of relationship although perhaps not as portrayed. There exists extensive record of close friends Carl Jung and Sigmund Freud and their breakup is a matter of historic record. The Russian born Sabina Spielrein did first enter this group as a patient and later as a leading light in founding the field of child psychology. She would know the two men quite well the record is not clear if she would become a mistress to either.

Between the quality of the acting the costumes and sets this is a five-star movie. The problem is in the story line. Upon reflection it does not hold together. Specifically the arguments being presented by the principles and the principal visuals do not coincide.

As A Dangerous Method would have it, Dr. Jung would become passionately involved with his former patient and provide her with the S and M sex she wanted. To dispense with the sexual side of the movie Sabrina clearly enjoys her role on the receiving end of violent sex. Carl is not portrayed as enjoying it very much. He looks to be experimenting with sex as therapy rather than a means of allowing either himself or her to experience the freedom that is one of the central themes of the larger story.

The inconsistency is that Dr. Jung argues that Freud is wrong in assigning sexuality as the single driving force behind psychology. However it is the sexual activity between Carl and Sabrina that consumes a very large portion of the movie. What in fact drove the breakup between these two founding giants. is that Dr. Jung developed a number of theories largely emphasizing elements such as racial memory. For racial memory to work people would receive particular impulses genetically. In the early 1900s there was no scientific basis for genetics at this level and the specificity of racial memory still sounds more mystical than scientific. Very little of the story line in A Dangerous Method covers or clarifies the their differences.

The good news is that the principal actors Michael Fassbender (Carl Jung), Kiera Knightley (Sabina Spielrein) and Viggo Mortensen (Dr. Freud) perform their roles brilliantly under the very tight direction of David Cronenberg. Miss Knightley portrayal of hysteria and her transition into a trained psychologist are exceptional performances. The bulk of the dialogue of this movie is thought-provoking the sexual visuals do not support the intellectual themes.

This is not a popcorn movie. The hysterical version of Sabrina makes demands on the viewer. The sex scenes whiel kinky are more clinical than titivating. Consequently the audience for this movie is going to be those who do not plan to turn off their brains, are not too committed to absolute historical accuracy and are not going to turn away at the first sign of a bared nipple.
21 people found this helpful
See all reviews
Back to top
Get to Know Us
Make Money with Us
Amazon Payment Products
Let Us Help You
EnglishChoose a language for shopping. United StatesChoose a country/region for shopping.
© 1996-2021, Amazon.com, Inc. or its affiliates