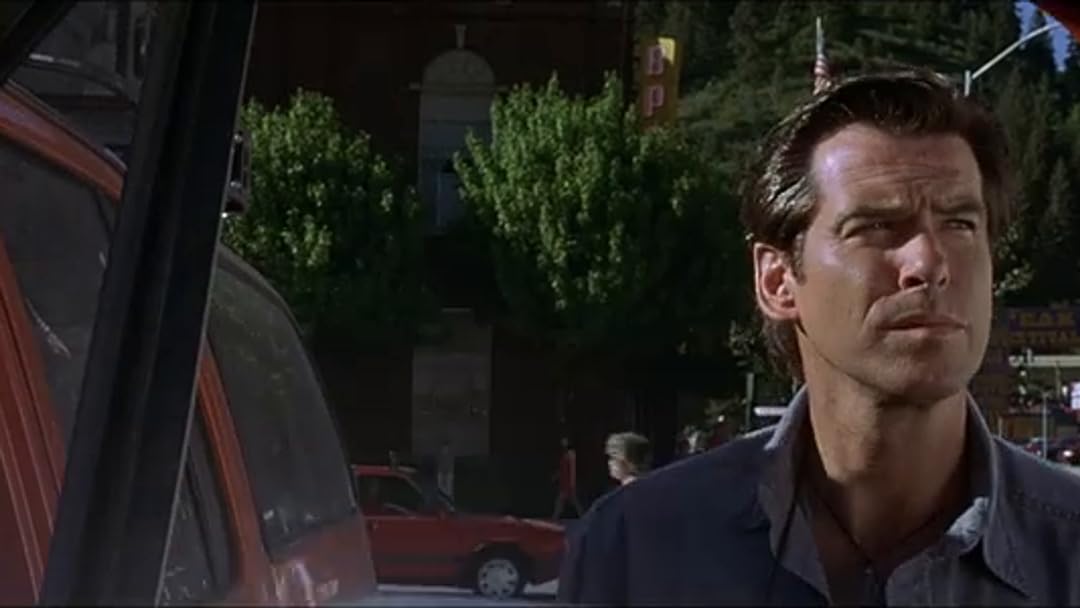 (9,234)
6.01 h 49 min1997X-RayPG-13
The volcano towering above a bucolic small town has been dormant for decades - but that mountain is going to blow its top in spectacular fashion! Action-packed with riveting special effects!

THOUGHTS: 1997 was the year Hollywood blew its top. Even though DANTE's PEAK came first, Tommy Lee Jones & Anne Heche snagged the lion's share of audience love (and box office cash) with VOLCANO. But in my mind smooth, suave Pierce Brosnan's magmatastic DANTE'S PEAK was the clear winner once the smoke & ash had settled. The scenario isn't as over-the-top and therefore seems somewhat more believable, despite the stupid non-science gaffs which flow faster than lava throughout the course of the movie. The threat feels more real and the scope is more intimate, despite the destruction being on a larger scale. Brosnan's portrayal of dedicated and frustrated volcanologist Harry Dalton is very low key yet utterly convincing, a nice departure from his showy, blowhard turns as Remington Steele & James Bond. Linda Hamilton turns in yet another strong female lead performance, as the mayor of the doomed town nestled at the base of the pissed-off Peak, while scientific volcano voyeurs (including the always dependable Charles Hallahan) help round out a solid ensemble cast. The visual F/X are quite good and still look pretty convincing more than two decades later. Some intricately-detailed miniatures and several hair-raising full-scale practical stunt sequences, mixed in with the computer-generated stuff, really help sell the whole danger & disaster package.

THE BLU-RAY: A fairly basic hi-def release, with a smidgen of extras. Presented in its proper theatrically-correct 2.35:1 aspect ratio, the video portion of the transfer is solid, with no pixelation, edge enhancement, artifacting or DNR tinkering, thankfully. Audio track is clean, clear and strong. The minimal bonus features (full-length audio commentary with director Roger Donaldson & production designer Dennis Washington and a brief 'making of' featurette) are merely ported over from DVD release. If you already have the DVD I still feel that this upgrade is worth a double-dip. The visual crispness of the hi-def format makes the whole spectacle look that much better. Recommended.

H. BalaReviewed in the United States on September 1, 2021
4.0 out of 5 stars
ah, crap, lava in the living room
Verified purchase
The 1990s saw its share of natural disaster movies, including the twin juggernauts TWISTER and ARMAGEDDON. But peppered throughout the decade were these little gems that were rife with campy, cheesy goodness: OUTBREAK, DEEP IMPACT, AFTERSHOCK: EARTHQUAKE IN NEW YORK, which was a 1999 CBS mini-series, and even HARD RAIN, which was a heist thriller staged during a monster flood.

In 1997 two volcano disaster movies were released two months apart: February's DANTE'S PEAK and April's VOLCANO. I tend to hem and haw as to which of these guilty pleasures I prefer best. I think it depends on what mood I'm in. VOLCANO is the more playful, more satirical film, riding on its wacko premise of a volcano bubbling under the streets of Los Angeles. DANTE'S PEAK is more straightforward. Its science is more credible. Its male lead isn't as live wire as VOLCANO's male lead.

You can't blame the city council of the quaint little town of Dante's Peak, Washington for giving Harry Dalton (Pierce Brosnan) the side eye. After all, Dante's Peak was just named the Second Most Desirable Place to Live, Population under 20,000 (first place went to some place in Montana). And, after all, Dante's Peak is right in the middle of celebrating its Pioneer Days Festival. So them suits don't want to hear from Harry the volcanologist ("You mean like Mr. Spock?" asks one curious child). Well, tough. Harry Dalton has been dispatched by the U.S. Geological Survey to look into worrisome data that's been monitored about the dormant mountain that looms over the town. This is one of those movies in which everyone pooh-poohs the expert's warnings, and this very much includes Harry's boss (Charles Hallahan) who'd rather not stir things up and panic 7,400 locals. Never mind the abnormal acidity in the lake, and the carbon dioxide coming out of the soil, and the dead squirrels, and the boiled corpses in that really, really hot spring.

His boss's not having his back, you can't much blame Harry's seething mad-on. Maybe you don't even blame him for packing his stuff, preparatory to bolting in a huff. But he decides to stick around. Maybe it's his conscience; he's a good dude; he wants to save lives. And maybe it's the good-looking mayor, Rachel Wando (Linda Hamilton), and her two kids, one naughty, one adorable. Harry has baggage, the emotional sort. He's yet to recover from a tragedy four years ago, a tragedy that still compels him to do angry, angry push-ups. But he and Rachel have this spark betwe- ugh, c'mon, man, I don't have to spell it out to you.

The odds of that dormant mountain erupting are 10,000 to 1. But tell that to the terrifying pyroclastic cloud that tears up the town in the second half of the movie. The first half of the movie focuses on setting up the dramatic conflict and the characters. And then comes the big payoff. I will say that, between Brosnan and VOLCANO's Tommy Lee Jones, it's Brosnan's character who undergoes the more harrowing, more hands-on experiences. Director Roger Donaldson (or his cinematographer) crams the Super 35 frame with some truly impressive action sequences, so yay the copious use of practical effects.

Oh, yeah, this film's cheesy, and people (cough**thosedumbkidsandgrandma**cough) make stupid, stupid choices. Thank goodness Brosnan and Hamilton make for agreeable leads. Unlike most other "epic" disaster movies, this one doesn't keep tabs on a sweeping all-star cast. No, it settles on tracking our volcanologist and his oddball lab team and the mayor and her fam, and that's it. It's a more intimate cast. It allows us to invest more deeply. But, of course, there are folks I couldn't abide onscreen, folks I couldn't wait to bite it. Figuring prominently in my vindictive crosshairs are Brosnan's boss (Hallahan) and that inappropriate grandma (Elizabeth Hoffman). I was rooting so hard against them. It only means those actors did a heck of a job being hateful.

Observe the scientific paraphernalia: the seismometers and that spider-legged robot explorer and the Extremely Low Frequency unit (the E.L.F.) - and they all amount to a whole heap of bupkis. DANTE'S PEAK reminds us that we are all, at any given moment, prey to the whims of nature run amok. But, sometimes, in cinemaland, when exposed to, say, a volcano with attitude, salvation may lie in movie magic - the kind of movie magic that renders your vehicle's tires incredibly immune to lava roads, and that renders your jacket acid-proof enough that you could wrap it around your arm so as to safely row your melting boat along in a lake of acid. Also, no cute dogs will perish in disaster movies. That's a sacred rule.

Eric C. GreenReviewed in the United States on February 5, 2021
5.0 out of 5 stars
More based in reality than "Volcano"
Verified purchase
Many people seem to enjoy the movie "Volcano" with Tommy Lee Jones more, but I actually like this one better. Why? To me, this is more realistic in terms of location, reaction, and the science of volcanology than the other. Pierce Brosnan plays Harry Dalton, a volcanologist haunted by a tragedy a few years earlier. He is sent by his boss to a sleepy town in the Pacific Northwest just to make sure a volcano is not going to erupt. Despite the data saying otherwise, Harry and Rachel, the town mayor, know that danger is coming. A little slow in some places, but the action kicks up at the right time.
4 people found this helpful

Dr. PaulReviewed in the United States on March 20, 2019
5.0 out of 5 stars
Always fun
Verified purchase
Dantes Peak has become a favorite, fun, go-to movie for background noise or a fun evening of big action film watching. We’ve seen it well more than 2-3 dozen times because it is so fun. This HD version is even more so, viewing on a larger screen is as fun and clear as can be. We love the film. It isn’t great literature for the movie screen. It isn’t going to win any awards. (it can’t as it’s of course been out for year, but you get the point). But it’s a fun ride and enjoyable to view.

You know, a typical week in America.

Fun, adventurous, an enjoyable way to spend some time.
5 people found this helpful

Monique HayesReviewed in the United States on April 13, 2018
5.0 out of 5 stars
Some people celebrate weirdly...
Verified purchase
This is one of my guilty pleasure movies, no doubt about it. Every year, while on the way to visit family, I go right through the small Idaho town where much of it was filmed. Because I lived in northwestern Oregon in May of 1980, I actually heard the infamous eruption of Mount Saint Helens, though we were too far south to actually see it. To me and my family, May 18th is Volcano Day, and this is one of the movies we watch pretty much every year.
13 people found this helpful

Raisuli the MagnificentReviewed in the United States on May 31, 2019
3.0 out of 5 stars
Okay disaster adventure film
Verified purchase
I'd heard about this film every so often, but hadn't seen it until recently. It harkens back to a time when disaster films were all the rage with the likes of The Poseidon Adventure, Towering Inferno, Earthquake and a few others. This one, to me, is a bit more cartoonish than previous films of the genre as it relies on a lot of digital effects.

I shrug my shoulders at it. It was worth seeing once, but some of the more "impossible" scenes make me think that seeing it once is enough.

I think a better films would have really accentuated the horrors of being caught up in the aftermath of a blast with a bit more realism. But I think the film's creative forces may have wanted a "child friendly" film for all ages, or at lest one that didn't scare more mature kids. Eh, well, to me that's a mistake, because kind of the whole reason disasters are called disasters is because they are disasters by way of killing lots of people, as volcanos have in the past.

Either way it's solid B-movie fare. Take that for what it's worth.
2 people found this helpful

AdieReviewed in the United States on January 12, 2018
5.0 out of 5 stars
A great cheesy disaster film, better than Volcano by far
Verified purchase
If you love cheesy disaster films (especially ones from the 90s) then this is the movie for you. It's shot in a gorgeous location, takes place in the fictional town of Dantes Peak and has humor and heart in addition to outdated 90s technology and a much younger Pierce Brosnan.

Horses and CowsReviewed in the United States on April 8, 2022
5.0 out of 5 stars
Fast paced right through to the end.
Verified purchase
Hadn't seen this movie in several years and noticed it at attractive price, so purchased it to add to my DVD collection. I don't have TV and my DVD's entertain when I feel the need. This was as entertaining as I remember...or more! I don't pick movies apart, I either enjoy them or don't and this movie rang my enjoy bell. Fun seeing Wallace, ID in a few of the shots, well acted and enough drama/excitement to keep me watching.
See all reviews
Back to top
Get to Know Us
Make Money with Us
Amazon Payment Products
Let Us Help You
EnglishChoose a language for shopping. United StatesChoose a country/region for shopping.
© 1996-2022, Amazon.com, Inc. or its affiliates