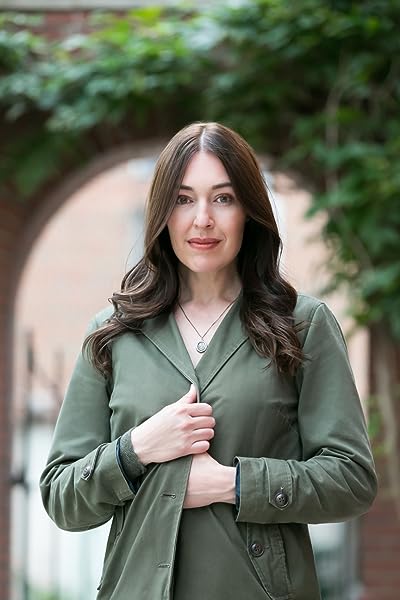 by Laura Marks (Author), Kelley Jones (Illustrator)
4.4 out of 5 stars 68 ratings
See all formats and editions
Sorry, there was a problem loading this page. Try again.

The voice from beyond the veil...

In the gaslit splendor of late-19th-century New York, rage builds inside 14-year-old Daphne. The sudden death of her father has left her alone with her grief-stricken mother. Emotionally adrift and living outside her means, the widow becomes easy prey for a group of occultists promising to contact her dead husband.

While fighting to disentangle her mother from these charlatans, Daphne experiences a genuine supernatural encounter--a strange, insidious presence in her own body. "Brother," a charming entity with unspeakable appetites, visits her in her dreams and whispers in her ear. Soon, Daphne is sharing his terrifying power.

A demon? A ghost? Her own hallucination? Daphne can't be sure what Brother is or what he wants. And even if she knew, could she stop him? Would she want to?

Laura Marks is a television writer and multiple award-winning playwright whose on-screen credits include The Good Fight, The Expanse, The Exorcist, BrainDead, and Ray Donovan. Her plays Bethany and Mine have garnered acclaim from critics and been published and produced across the US and overseas. A graduate of Juilliard's playwriting program, she lives in New York City.

Laura Marks is a PEN Award winning playwright, television writer and comic book writer. Her debut comic series for DC's Hill House Comics, DAPHNE BYRNE (with art by Kelley Jones), will be released as a hardcover graphic novel in November 2020. Her plays BETHANY and MINE have garnered acclaim from critics and been published and produced across the US and overseas. For TV, she's written episodes of THE GOOD FIGHT, THE EXPANSE, RAY DONOVAN, THE EXORCIST, and BRAINDEAD. She lives with her husband and two daughters in Brooklyn.

4.4 out of 5 stars
4.4 out of 5
68 global ratings
How are ratings calculated?
To calculate the overall star rating and percentage breakdown by star, we don’t use a simple average. Instead, our system considers things like how recent a review is and if the reviewer bought the item on Amazon. It also analyzes reviews to verify trustworthiness.
Top reviews

Taylor M. Foley
4.0 out of 5 stars It was not great.
Reviewed in the United States on June 15, 2021
Verified Purchase
Of the 5 Hill House books, this was the least entertaining. I was disappointed, so why my wife. The story seemed stretched out. It would have made a great short story.
Read more
One person found this helpful
Helpful
Report abuse

Alandis Russaw
2.0 out of 5 stars Not for me.
Reviewed in the United States on July 13, 2021
Verified Purchase
Not my favorite comic, and didn't enjoy the premise, but to each their own.
Read more
Helpful
Report abuse

MirandaL
2.0 out of 5 stars Intriguing idea, but not the best
Reviewed in the United States on November 5, 2020
I received an eARC from NetGalley in exchange for an honest review.

I came across Daphne Byrne (Hill House Comics) by Laura Marks on a whim while looking for new comics. Once I saw it was available on NetGalley, I decided to try my luck with getting an eARC. I was pleasantly surprised when my request was accepted, and I was super excited to delve into the story.

The premise of this horror comic completely pulled me in. It follows Daphne Byrne, a young girl who is dealing with the loss of her father. One day she meets Brother, a mysterious demon. The two spend more time together, but Daphne cannot help but wonder if she is imagining him. While dealing with her own problems and grief, Daphne’s mother is dealing with a spiritualistic group who seem to be helping her communicate with her dead husband. However, things soon take a turn for both Daphne and her mother as things are not what they seem.

I went into this comic really intrigued by the plot overview, but in reality, it kind of fell flat. Certain parts were choppy or boring at times. I also would have like more background on Brother. The illustrations by Kelley Jones match the dark tone of the comic, but it was not my favorite style. At times, characters blended together. Daphne’s character was also portrayed in ways that made her seem way too old to be a child. However, I did like Daphne’s character and how the story touched the surface of grief from losing a loved one.

While I did not love Daphne Byrne, there were still some cool elements that I enjoyed. It was a quick and somewhat entertaining read for me. The idea for this comic is really intriguing, but I wish the execution of it stood out to me a little more. However, I do see why some people would really enjoy it. If this seems like something you would enjoy, I would still recommend picking up a copy.

Thank you to the publisher, DC Comics, and NetGalley for giving me the opportunity to read and review this comic before its release on November 3rd, 2020.

Annie Wilkes
5.0 out of 5 stars Amazing!
Reviewed in the United States on June 1, 2021
First and foremost, I love the style of Kelley Jones and I always will. Everything that he’s touched is amazing and beyond so many others artistic ability. Even when there’s a million things going he finds a way to make your key focus jump off the page.

Laura Marks and Kelley Jones have created a masterpiece. Right off the bat our setting is late 19th century New York which gives eerie and ominous imagery. There couldn’t have been a better time frame.

We follow young Daphne through her life after the loss of her father that caused her so much loneliness and heartbreak. If you’ve ever lost someone you know that you’d do anything to have them back. This vulnerability causes attraction from others, making “brother” the perfect new friend.

This comic completely blew me away from start to finish.

Find out all the unsettling details for yourself!
Read more
One person found this helpful
Helpful
Report abuse

Kristine Fisher
3.0 out of 5 stars Daphne Byrne
Reviewed in the United States on January 21, 2021
Daphne Byrne by Laura Marks is a free NetGalley e-comicbook that I read in early November.

The lead character, Daphne, mourns her dead father and sets through visions of the underworld conjured by her widowed mother, who seeks comfort from suspicious seances, and those embedded in her own consciousness where there waits a young man who wants to give her both the attention and protective vengeance she craves. It’s very Gothic dark with occasional swaths of texture, like wood grain, the mesh of a veil, and the blot of cobblestones.
Read more
One person found this helpful
Helpful
Report abuse

Kara Corthron
5.0 out of 5 stars Twisted Girl Power
Reviewed in the United States on November 30, 2020
I sat down to read this yesterday afternoon, thinking I'd read a little and probably finish today. Nope. I sat and read the whole thing in under two hours and I tend to be an impatient reader. It's so much fun from beginning to end. Daphne is a nineteenth century teen living in NYC and grieving the recent passing of her father. She's an outcast at school and her mother is more interested in visiting a medium to "talk" to her dead husband than noticing her daughter's feelings. In a world where girls are meant to be quiet and well-behaved, Daphne discovers a part of herself (or is it?) that is loud, unruly, and completely unpredictable.

Indre P
3.0 out of 5 stars A middle of the line kind of book
Reviewed in the United States on December 29, 2020
A Rosemary's baby kind of horror story. Not the best in this series. The best part was that the devil doesn't need a boy in this story. Other than that, eh. Short, not the best graphics. Kind of mediocre.
Read more
One person found this helpful
Helpful
Report abuse