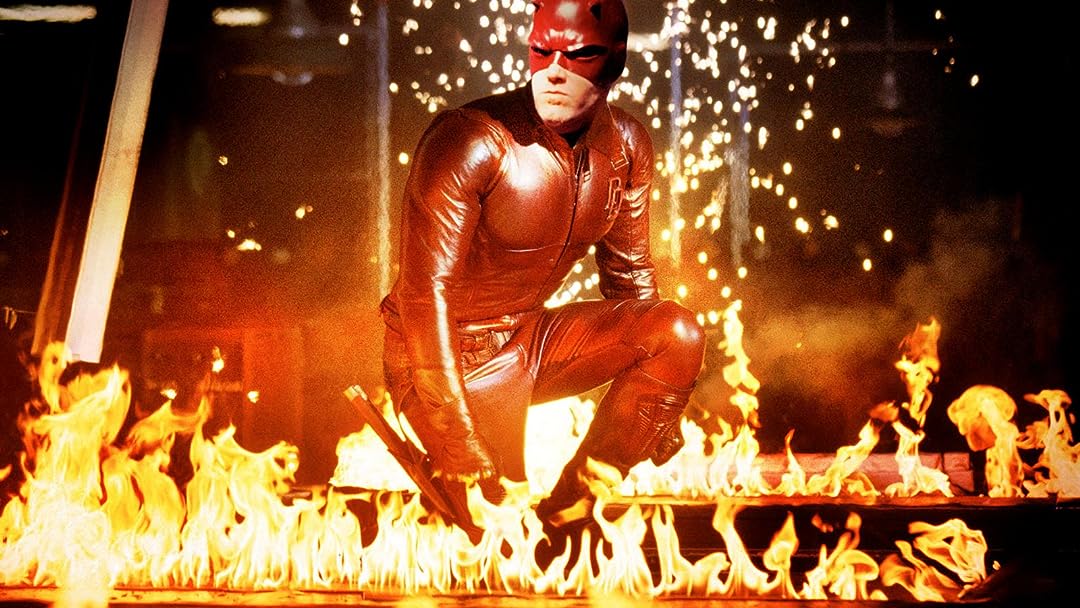 (3,538)
5.31 h 43 min2003X-RayPG-13
A lawyer blinded by radioactive waste fights crime as an acrobatic martial arts superhero, using his other senses, which have been enhanced.

SBReviewed in the United States on December 21, 2016
4.0 out of 5 stars
This Director's Cut gives Daredevil his due
Verified purchase
Daredevil Director's Cut is a much-improved version of the movie that was released in theaters. Being R-rated it added more time, violence and bone crunching moments in the major fight scenes. The film's overall tone was more consistently dark and gritty but still having a heart. You see more character interactions. This cut also adds a major subplot that not only fleshes out Matt Murdock and Foggy Nelson characters as lawyers but fills in major plot holes the original movie had. This made the Final Act with Daredevil and Wilson Fisk more satisfying and meaningful.
The movie still has its issues. The playground fight scene is over the top and hard to watch. When young Matt Murdock discovers his powers he acts more like Spiderman than Daredevil when jumping around in midair. The obvious signs of young Matt Murdock becoming the Daredevil were a bit "on the nose" at times. And Yeah Colin Farrell's Bullseye is a bit exaggerated, but I kind of liked it (Is that weird?)
Overall the added 30 minutes of this movie made this "diamond in the rough" very enjoyable and fun. Is it on the same level as Iron Man or Batman Begins? No, but it's better that all of The Amazing Spiderman (1&2) and Fantastic Four movies. The more I watch this version of the movie, the more I appreciate how great it is. Had this version of the movie been released in theaters more people would have liked it. But it seems time has made this Directors Cut an instant Cult Film. So pass the Cool-aid around because I'm a fan. Cheers!

joel wingReviewed in the United States on October 8, 2020
3.0 out of 5 stars
Not as bad as some critics say but still has some big problems
Verified purchase
Daredevil was one of the pre-Marvel Cinematic Universe films. It featured Ben Affleck as Matt Murdock who would become Daredevil, Jennifer Garner as Elektra, Michael Clarke Duncan as the New York crime boss Wilson Fisk aka Kingpin, and Colin Farrell as the villain Bullseye who is hired by Kingpin to get rid of Daredevil. The story is about Murdock’s relationship with Elektra which brings him into conflict with Kingpin and Bullseye.

The movie tries to give the story a little Film Noir feel to it. Murdock does a voice over about his crime fighting. There’s plenty of night scenes playing upon the darkness and shadows that were popular in Noir. One time Murdock wonders whether he’s making any difference which is a classic Noir trope of the main character up against the world.

The main problem with the film is that Affleck is just not a convincing superhero. There’s a sequence where he first meets Elektra and they have a battle of skills in a playground and while she has a nice flow to her motions Affleck does not. Of course most of his action scenes are full of special affects as well.

The director also did a bad job with Bullseye. For instance he kills Elektra’s dad with one of Daredevil’s sticks which has a blunt tip. How do you kill a man with a stick that doesn’t have a point to it????

Overall, the movie wasn’t as bad as some said, but it still had some big flaws.
C

fourminutestimeReviewed in the United States on November 19, 2019
3.0 out of 5 stars
director's cut is much better. it fixes the story and it makes it better
Verified purchase
I liked this movie a lot when it came out. but i know it had a lot of problems. I was happy to see Daredevil on the big screen and i was happy to see him in the daredevil suit. i loved the actors they hired and i loved the action scenes. I thought bullseye was cool and i liked him a lot. Elektra was pretty and i liked her. Kingpin was great too. i really loved the daredevil suit and the scenes of him fighting were really great
I know a lot of people had problems with this movie when it came out and a lot of people did not like it, but the director's cut of the movie was much better than the movie that came to theaters.
the directors cut adds a lot to the lawyer plot and explains the case that Daredevil is working on. the directors cut adds scenes of Elektra and adds to her character. even Bullseye has added scenes and some comedic scenes that were cut in the theatrical version. This director's cut is much more complete and makes the movie better.
7 people found this helpful

Ron BurgundyReviewed in the United States on April 28, 2021
5.0 out of 5 stars
They dont make them like they used to
Verified purchase
I dont care how unpopular ben affleck is with the paparazzi these days. The man makes a good superhero character plain and simple, and Daredevil is no exception. Great acting, cinematography, lighting, cgi, character cast; the movie has a soul, unlike so many so-called movies out today. Politics has ruined Hollywood. If you go to youtube looking for recommendations you will find a bunch of political snowflakes and cancel culturists reviewing, or should i say condemning this movie for reasons that have nothing to do with what makes a movie good or bad🙄. I paid 15 dollars to pay for the digital version of this movie and IMO it was worth far more than i paid for it.
2 people found this helpful

NATmanReviewed in the United States on May 10, 2019
5.0 out of 5 stars
Movie is great for fans. Amazon needs to show the right cover that they are selling tho
Verified purchase
Amazon is selling blurays showing one cover but sending a different, or different colored bluray cases. I have a nice pile of red bluray cases that I bought because amazon misrepresented the Red Dawn Bluray that I purchased, so I bought my own red cases. I thought this version of Daredevil would look great in a red case, but instead I receive some other version of the cover.
6 people found this helpful

Allen BerryReviewed in the United States on May 15, 2014
3.0 out of 5 stars
Flawed, sure, but perhaps not as horrible as some say.
Verified purchase
In any review of a Comic Book Film, it must be understood that there is the impossible task of attempting to satisfy legions of rabid fans who have loved and read about the character for years, even decades. There are always going to be those who complain about one aspect or another that the filmmakers overlooked or that the actor wasn't the right one.

In spite of all this, there are a great many things about this film to like. The chemistry between Ben Affleck and Jennifer Garner, for example, is amazing (small wonder in light of the fact they later married). The action sequences are pretty impressive, and Garner's performance was enough to spawn a spinoff.

OK, the portrayal of Daredevil's sonar wasn't like it is in the comics... yet, it works for me. It would be rather hard to demonstrate it the same way. But there is at least one place where the movie falls short of the comic. It seems to be a bit confused as to whether it's a comic book movie about a comic book character, or if it's a gritty realistic film about a comic book hero functioning in the real world. This is most blatantly evident the character Bullseye. The performance is all right, but he doesn't have a costume. He asks for one, but doesn't get one.

To be honest, I'm pretty forgiving when it comes to movies. It's been a while since I've seen it, and I ordered this as a part of my collection. It's a good film, not a great one... the films licensed to Marvel Studios will ALWAYS be superior because they have a greater stake in making them quality movies. Part of the reason I purchased it was for my collection, but another is to compare the Marvel character films with the later Marvel Studios films. It's not just horrible the way than many seem to suggest. It's watchable, even fun at times.

If you're new to the character or if you can turn off your internal critic, you'll find this a fun watch.
5 people found this helpful

PenchéeReviewed in the United States on November 2, 2020
1.0 out of 5 stars
Excrutiating Waste of Celluloid!
Verified purchase
I gave one star only because it does not have zero or minus stars.
What was the theme? Okay, I give in – what? This must have been a contract film for Been Afflicted with the contract fulfillment clause. The best thing that I can say about this 'film' is, watch the series. At least it has a story line with real people and acting. Yes, it too is corny but, it is immersive and flows.
Do we really have to give it stars? How does one denote minus or negative stars?
2 people found this helpful

VeeReviewed in the United States on October 13, 2020
2.0 out of 5 stars
Fave Movie, But...
Verified purchase
This is one of my all time favorite movies, so I was really excited to find it with the Director's Cut. Unfortunately when we opened it (brand new!) on movie night it played all the way until the ending and then promptly froze no matter how many times we dusted it or restarted it from the scene selection. It cut off right at the end of the fight with Kingpin, too, so there was no resolution to be had. I am incredibly disappointed and unsatisfied.

The only reason it got the two stars it did is because it IS one of my all time favorite movies, but the point of buying it is so that I don't have to go trolling for scraps on Youtube when I want to re-watch it.
See all reviews
Back to top
Get to Know Us
Make Money with Us
Amazon Payment Products
Let Us Help You
EnglishChoose a language for shopping. United StatesChoose a country/region for shopping.
© 1996-2022, Amazon.com, Inc. or its affiliates