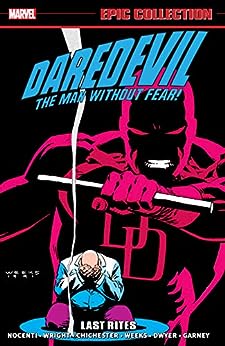 The fall of the Kingpin! An amnesiac Matt Murdock is Daredevil no more — so who’s swinging around town in the red suit? And why is he committing vicious crimes with pinpoint accuracy? Matt thinks he’s the boxer Jack Murdock — but can he battle his way back to becoming the Man Without Fear once more? Meanwhile, the Kingpin sets his sights on building a media empire! But a reborn Daredevil is determined to administer the last rites to Wilson’s reign of terror, and he won’t let anyone stand in his way — even the lethal Typhoid Mary! With Nick Fury, S.H.I.E.L.D. and Hydra all involved, will Daredevil finally bring down his archenemy once and for all? Plus: Captain America! Taskmaster! Tombstone! Baron Strucker! The Punisher! The Hand! And Ghost Rider!
Read more
Previous page
Next page
Read this book on comiXology. Learn more
Kindle e-Readers
Fire Tablets
Free Kindle Reading Apps
Available on these devices
Books In This Series (40 Books)
Complete Series 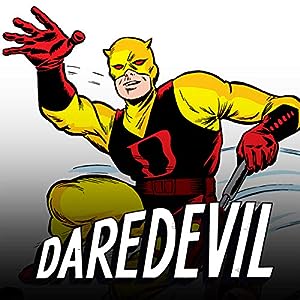 4.6 out of 5 stars
4.6 out of 5
81 global ratings
How are ratings calculated?
To calculate the overall star rating and percentage breakdown by star, we don’t use a simple average. Instead, our system considers things like how recent a review is and if the reviewer bought the item on Amazon. It also analyzes reviews to verify trustworthiness.
Top reviews

Nathan Baker
5.0 out of 5 stars Chichester run is a lot of fun
Reviewed in the United States on January 1, 2021
Verified Purchase
Once you get through Nocenti awful run of Daredevil which ends in this volume, you get to Chichester awesome run. He had a lot of fun writting Daredevil and you can tell. He let's his horror roots show by his choices of crossovers. He also saved Daredevil after Nocenti almost ruined Daredevil by injecting her socialist, political liberal rants in her Daredevil stories. Even in 1990 that nonsense was infecting comics. She was a comic jobber and probably why they made her an editor because her writing sucks. But all in all this book is really good after her crap. Chichester run is when I got hooked on Daredevil and he became my favorite comic book hero. I have the single issues of his Daredevil run but couldn't pass up having them in a collected edition.
Read more
5 people found this helpful
Helpful
Report abuse
See all reviews

Temple Phoenix
4.0 out of 5 stars Fall of the Kingpin
Reviewed in the United Kingdom on January 11, 2021
Verified Purchase
Volume 15 of the Daredevil Epics takes us from the conclusion of Ann Nocenti's run as writer to the opening of D.G. Chicester's, both alongside new regular penciller Lee Weeks. It begins with the latest in a long line of identity crises for ol' Hornhead, and ends with a final (for a given superhero value of 'final') reckoning with his archnemesis the Kingpin.

The arc in which Matt loses his memory and Bullseye steals his place as Daredevil is fun enough, although many readers may be fatigued by yet another storyline where DD wrestles with his inner demons. In the background, though, is a subplot about Kingpin entering the media business, and that only becomes more important as Chichester takes over.

Before the big finale, though, we have DD's section of the Von Strucker Gambit in 1991's annual (if you're also collecting the Punisher and Captain America Epic Collections, you'll have the other two parts), and run-ins with both the Punisher and Ghost Rider, just in case you had forgotten that we are in the Nineties. The Hand make a return, and between them and the Kingpin storyline it feels like a conscious attempt to emulate Frank Miller's celebrated run on the book.

The title storyline caps off the volume, and it is genuinely satisfying to see Murdock resolve to take down his longtime nemesis once and for all. Even knowing that nothing really lasts in cape comics, there's still a lot of catharsis to be felt as Wilson Fisk finally gets a taste of his own medicine. It's a good story that also makes the volume feel like it has a proper arc and structure to it.

Extras include cover art from the Fall of the Kingpin trade, an original art page by Weeks, a Marvel Age cover and article about the big 300th issue and a faux-article from the Swimsuit Issue. A decent run of DD, even if all of it feels like it's already been done better.
Read more
2 people found this helpful
Report abuse

Alexandre Guarnieri
5.0 out of 5 stars AAAAAAAAA+++++++++
Reviewed in Brazil on December 28, 2020
Verified Purchase
AAAAAAAAA+++++++++
Read more
Report abuse
See all reviews
Back to top
Get to Know Us
Make Money with Us
Amazon Payment Products
Let Us Help You
EnglishChoose a language for shopping. United StatesChoose a country/region for shopping.
© 1996-2022, Amazon.com, Inc. or its affiliates