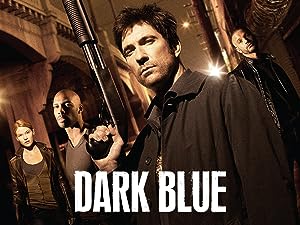 (287)
7.5200913+
Dark Blue takes place in the underbelly of Los Angeles, where criminals roam free under the veil of night or hide in the shadows of day. Wandering in and out of this seedy underworld is commonplace for Lieutenant Carter Shaw (Dylan McDermott) and his special undercover task force. This team understands, better than anyone, that to bring down a criminal, one must first get on their level.

Avg JoeReviewed in the United States on March 29, 2014
5.0 out of 5 stars
Season one was magnificient, Season two makes you wonder what incestuous brood of maladroits they keep tapping for TV execs.
Verified purchase
Season 1 was marvelous! Exceptional characters, damaged and gritty yet you still feel empathy for them. A claustrophobic look into the dark world of deep undercover cops on a special task force that is sanctioned to bring down the worst of the underworld. They are pushed to go the extra mile and then pushed even further. The damage it does to their lives as they become fully immersed in the gangs and organizations that they penetrate, month after month and year after year. Everything becomes lies and betrayal with the singular goal of getting the job done. Some of them begin to question who the real bad guys are, even as their personal lives outside of work deteriorate or fall away entirely.

Season 2 saw writing and casting changes that diluted it into a conventional "cop" show.
That pretty much killed it.
Apparently someone at network thought it was too "edgy" and decided that a vanilla cop show was the way to go.

I really do hope that exec was fired.

john stewartReviewed in the United States on September 11, 2010
5.0 out of 5 stars
This show is what an action-packed and suspense laden cop and bad guys show is supposed to be like.
Verified purchase
[[ASIN:B003VBR5YO Dark Blue: The Complete First Season]]This is what an action-packed and suspense-laden cop and bad guys show is supposed to be like. The bad guys are so evil that I actually got stressed up during each scene where it seemed that the undercover cop was about to be discovered. I actually got scared that the cop would be badly hurt. The scenes tightly follow each other to give you a feeling of non-stop rollercoaster action. Dylan McDermott used to show compassion in his previous attorney character in the Practice series. Here, he is all driven to put really bad guys out of business. He never gives his own cops any leeway for any compassion or personal issue to interfere with catching the bad guys. Sometimes the undercover cops get close to the people they are building cases against. They become torn as the arrests are about to be carried out. I watched the first season of Dark Blue as it was being shown on cable. I liked it so much that I bought it on DVD's. When the second season is available on DVD's, I'll buy it too.
7 people found this helpful

nathan a yeoReviewed in the United States on August 17, 2018
5.0 out of 5 stars
good old fashioned cop show
Verified purchase
Whenever things get hingy the hero shows up with his long trench coat and shotgun. They're dirty cops but not corrupt, they find the only way to get the criminals is to work around the system like the criminals do.

GrahamReviewed in the United States on May 4, 2014
4.0 out of 5 stars
Strong start and finish with a miss able episode or two in the middle
Verified purchase
Some Episodes are better then others, but some Episodes are really good I enjoyed the season opening and ending I thought really good tv which is why I gave it 5, Sometimes I wish Seasons were shorter so they could drop the weak episodes. but in this case the weak episodes were not unwatchable which is why I gave those a 3, so average out a 4

It does have the cliche drug war view of 'drugs are the worst thing in the world' and 'police have to bend the rules to get results' but not so bad that it distracted from my enjoyment.
One person found this helpful

Mark J.Reviewed in the United States on March 25, 2014
2.0 out of 5 stars
Where is the realism?
Verified purchase
The fact that the first scene is a 12 volt car battery shorted to a bucket and not completing a circuit through the victim magically making AC electricity that nearly kills a guy and makes the lights go crazy, even though it's not even tied into the grid, is enough to let me know they did not really bother to shoot for any sort of realism in this one. That was all I needed to see.
One person found this helpful

CarReviewed in the United States on April 29, 2020
5.0 out of 5 stars
Dark blue season 1
Verified purchase
Been waiting for the series for a long time

The Daring Show Review TeamReviewed in the United States on July 30, 2013
4.0 out of 5 stars
A wonderfully entertaining show.
Verified purchase
I use to watch this series when it came on TV. I really hated when they cancelled Dark Blue after 2 seasons. The show was fast paced however I think that some parts may have been unbelievable to some viewers. No matter what the dilemma was we always knew McDermott's team would prevail.

Despite some of the unbelievable story lines, it was great to have so much eye candy on network television in one show. Dylan McDermott (one of the most versatile) will probably be a more visible actor than his Dark Blue co-stars. His lead role in The Practice was the reason that I watched Dark Blue in the first place.

Omari Hardwick (easy to typecast as a sex symbol for some) was brought to my attention in the movie Miracle at St. Anna. After Dark Blue, where he plays a married undercover agent he had roles in the movies I Will Follow, For Colored Girls and Sparkle.

Logan Marshall-Green who plays Dean, a sly, unattached and unemotional character to my surprised has played in three TV series, 24, The O.C and The Traveler. I have never watched those but because of him maybe I will.

Nicki Aycox, the only woman in the secret undercover crime fighting quad has appeared in other TV shows, such as Providence, Ed, Over There, Supernatural and Cold Case just to name a few. Her character in Dark Blue annoyed me, but for me that means her acting was good.

Her character was the only one that made me actually talk to the screen (well yell actually).
See all reviews
Back to top
Get to Know Us
Make Money with Us
Amazon Payment Products
Let Us Help You
EnglishChoose a language for shopping. United StatesChoose a country/region for shopping.
© 1996-2022, Amazon.com, Inc. or its affiliates