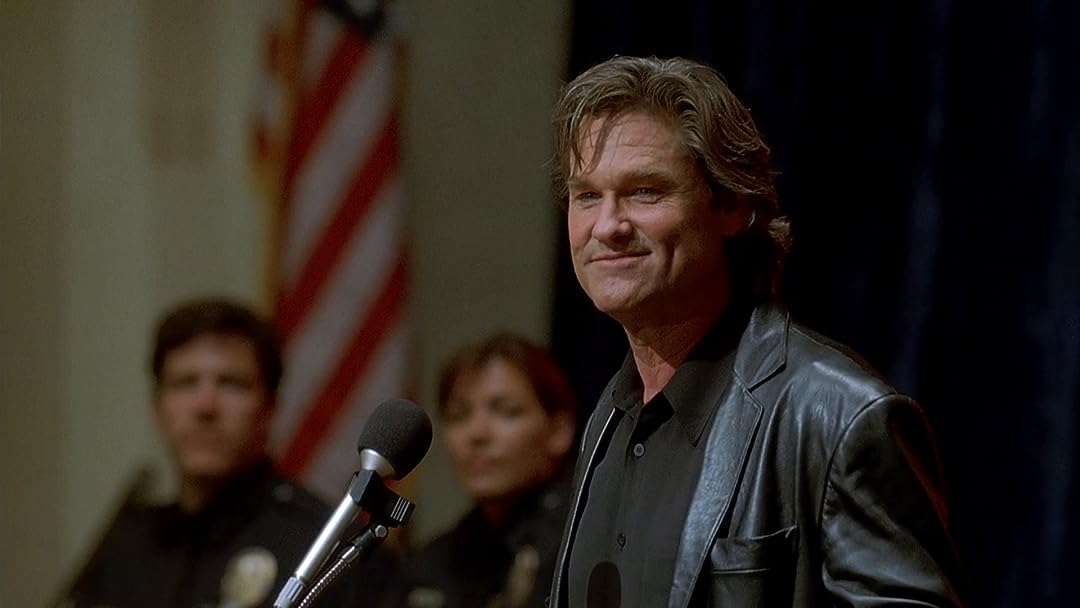 (535)
6.61 h 57 min2003X-RayR
Adrenaline is high, tempers are hot, and racial tensions are boiling over. Against this explosive backdrop, LAPD detective Eldon Perry (Russell) tutors his rookie partner (Scott Speedman) in the realities of police intimidation and corruption as they investigate a high-profile homicide case. But as the body count rises and the evidence just doesn't add up, Assistant Chief Arthur Holland (Ving Rhames) threatens to end Perry's brand of "justice" if Perry's own demons don't destroy him first.

H & PReviewed in the United States on May 19, 2020
1.0 out of 5 stars
P.C. crap
Verified purchase
Another political indoctrination piece. All the cops are dirty, and all of the criminals are innocent, misunderstood victims. I'm an ex-cop from a major violent crime city. I sometimes wish that people would stop joining P.D.'s so that the common fool, in his arrogant ignorance, could personally experience the life of a true victim of violent crime. It's a passing thought. Yes, my heart is cold and calloused; that's what the job does to cops.
36 people found this helpful

ZacharyReviewed in the United States on July 9, 2019
5.0 out of 5 stars
Kurt Russell's Best Performance
Verified purchase
Such an underrated movie. This is Kurt Russell's best performance. I'm not sure how many other actors there are that could have pulled off such a complex character. This is a movie that will never be irrelevant. David Ayer and James Ellroy's writing is top notch. This is a heavy flick that deals with serious cultural issues in a way movies probably wouldn't dare to today. Politically incorrect. Layered. This movie nails what it sets out to do. If you're a Russell fan, definitely check this one out.
16 people found this helpful

Th3_5t4mp3d3Reviewed in the United States on May 24, 2020
5.0 out of 5 stars
I had forgotten I watched it before!
Verified purchase
But it was like new to me. I couldn't predict anything (beyond the stuff actually pulled from "today's headlines"), only remember them as they were unfolding. Russel really is a pleasure to watch in anything but this may be my favorite role yet. Dirty cop, among the dirtiest even, but still an amiable badass, and still driven by a sense of justice, however jaded. His personal morals were very self-centered, if understandable, and bled into that sense of justice. What it took to jar him back to his innocence, to soften his heart of lead, was far too much. And *spoilers* we were still left wondering if it wasn't vengeance for a betrayal that set him about to his final task of exposing department rot and corruption, much more than the gruesome and unexpected death of his partner he witnessed maybe a couple hours prior.
4 people found this helpful

ShaneReviewed in the United States on November 12, 2018
2.0 out of 5 stars
An awkward, racially-loaded police drama about LAPD corruption. 2.5 stars.
Verified purchase
The story was interesting at first , but Russell's overacting combined with Speedwell's weak performance really failed to create a plausible partnership between the two. Ving Rhames and particularly Brendon Gleeson were excellent. The story is about rampant police corruption at high levels in the LAPD running parallel in time to the riots after the Rodney King trial. The entire film seems very prejudice against the police in general. There is a moment of vindication where Kurt Russell's character confesses in front of a police academy ceremony, and this makes for an awkward and anti-climactic ending. To it's credit the script was good and unpredictable and if you like police dramas about corruption this will be worth a watch. The racial elements I thought were overdone and tasteless and for the most part unnecessary. Flagrant use of the N word does not make a film about race authentic. In Django Unchained it was comical and parody, but here it just came across as a bunch of white writers trying to act "gangsta". If you are put off by racial themes that are not particularly well handled this may be worth a pass. I would give it 2.5 stars if that were an option simply because Russell's acting improves as the film goes on and he manages to carry the film and make a semi-likable bad guy.
11 people found this helpful

DetectorReviewed in the United States on May 9, 2021
4.0 out of 5 stars
Not a half bad cop movie.
Verified purchase
Jeffrey Bone observed in his review here, that Russell's character, Eldon, loaded only 3 rounds into his shotgun before the climactic shoot-out, leaving 2 in the shell carrier. I noticed that too, and like Jeffrey, it struck me as odd since the shotgun holds 5 rounds in the tube, and one more in the chamber, and it would be kinda dumb to go into a gunfight two short. But, here in Florida, and looks like in California, too, only 3 shells are allowed by the state's game laws in the tube when hunting, so the guns are sold with a rod in the tube to prevent more than 3 shells from being loaded into the tube. The rod is easily removed, but I'm guessing the armorer forgot to remove it. Later, we see 3 shells in the shell carrier, a continuity error. So, did anyone count how many times Eldon fired the shotgun into the roof? I didn't. Anyway, Russell and Gleeson do excellent work in this film. Gleeson is untouchable as VanMeter. No one could have done that character as well. Russell is sort of an oddly designed guy, and he can be a little bit distracting pulling off a character like Eldon, but I will give him great credit for being able to use his face and eyes alone to convey what is going on inside his character. He has some fine scenes that were very well directed, in particular the one where Gleeson brilliantly as VanMeter humiliates and bullies him while ordering him to subordinate himself to him, and Russell shows us with his face and posture what it does to him. Also, the scene in which his wife leaves him, and when his partner is shot. Actual disturbing, violent video, that anyone who was watching tv at the time will remember, is woven into the movie very tellingly. The riot re-enactments are well done.
One person found this helpful

AbeReviewed in the United States on April 21, 2021
2.0 out of 5 stars
Nothing worse than corrupt cops (Authority)
Verified purchase
Like an other evil people, the more they get away with (King's good example!) the more Evil they will do! Evil people (including COPS!) Do EVIL because they *CAN*---no one's stopping them;
Cops R protected because they have a badge, & supposed legal authority. If cops have a "criminal friend" (no badge) They make him an "informant"---free 2 engage in evil & criminal activity w/o fear of jail or punishment. (1 of system's many legal "loopholes" that help propagate evil)
Sidenote: People (including cops!) *ROUTINELY* LIE, including under oath---& of course here also no punishment (at least not in this life)---so if they can get away with this sin, why not do others?!?
OH---sidenote #2: I'm no lawyer, but pretty sure cops sleeping w Judges, is a conflict of interest.
We know (even most cops admit this)----most crimes go unpunished---including murder.
So if we *REALLY* want to clean up society (hey, many do not, many criminal things R fun & PROFITABLE!) we should start not from the bottom up, but the top down.
PS Laws (legal side of justice) don't help----even where cops have been videoed-- (like KING!) most laws R ambiguous, & if cop's lawyers (cops have unions, other cops to help etc--unlike countless poor who can't afford an attorney) can convince "panel" (very rare for a cop case to even go to *TRIAL*---& cops shoot over 1,000 people a year in US [2 say nothing of lesser crimes]) cop was "in defense" or "afraid for their life" cops get off. OH, & while being investigated, cops often get "PAID" (administrative) leave!
"can't shoot a man in bed"---not true, cops have murdered many in bed, some even sleeping.
"SHOOT 1St & ASK QUESTIONS LATER" (standard policy) makes for the best KILLERS, don't you think?
After all, many cops R Ex-Military---miss the killing---what better way to "legally" get their jollies off?!?

Movie---why is it women cops wear vests, & men don't? [seen this b4!] In R/L MEN wear them too---cause they don't want to get killed from known killers! (R they making women in movies smarter, or men stupider?!?)
Cop puts *KNOWN* killer in *FRONT* seat, w *NO* handcuffs?!? Don't think so! [what was that about movies making men look *STUPID*?!? R King: 4 (large MEN) cops, 1 suspect. (on the ground, face down, maybe even having trouble breathing, *AND* BEFORE even being handcuffed (rem 4 big men!) he was hit/kicked over 50 times!!! (they cracked his skull & he had PERMANENT BRAIN DAMAGE!)
COPS DON'T TAKE CHANCES! (esp the violent/corrupt/evil ones)
Sidenote: Blacks (or anybody) doesn't help their cause when they riot. RIOTs never got justice for anyone.
Last 4 movie: No cop has *EVER* (& NEVER EVER WOULD!) openly confessed to criminal activity in public, & NEVER would! (by the time you've done that much evil, there's not much conscience left--"plea bargains" R commonly used (why don't u see this in movies?!? Hollywood is *FANTASY*, & only rarely reflects reality, (mostly Docs) --plea/immunity: Criminal gets less/no jail time for testimony to incriminate someone else. [not seen this movie]
UNREALISTIC Corrupt cop movie: 2*; Does bring up many things worth discussing, but most don't care & just want Entertainment right?

Films4LifeReviewed in the United States on July 4, 2016
5.0 out of 5 stars
One of the most stellar and engrossing cop thrillers ever made
Verified purchase
I have no clue how this movie slipped under the radar. Its a top notch cop thriller with excellent performances all around. Kurt Russell gives one of his best performances in his long, long, long list of great performances and its directed by the great Ron Shelton (White men can't jump, Tin Cup and the amazing Bull Durham). Thoroughly engrossing and exciting and captures its time period perfectly. Dark blue is aces!
24 people found this helpful

Gary RobinsonReviewed in the United States on May 8, 2021
1.0 out of 5 stars
In the Wake of Rodney King.
Verified purchase
This review is written in the wake of the George Floyd verdict. Depending upon what you think of these two, no three trials is going to determine if you want to watch this movie.

I though, I might try this movie since I liked other movies that Kurt Russel was in.

The movie starts with a car chase and a scene with cops viciously beating a suspect with batons.
It's the edited and condensed Rodney King beating video. It's the one that was shown on TV every day until the trial started. I was sure at the time that the cops were guilty. Then they trial was shown live and the unedited tape was shown. I was now sure that the cops who did everything by the book would get acquitted. And, they did. But it was not the right verdict and the worst race riot in US history started.

The same thing has just happened 2021. There was an 8 minute video and a one hour body cam video. To me one made the cop look guilty; the other not.

From the opening scene I could tell where the movie was going and decided not to go there.
One person found this helpful
See all reviews
Back to top
Get to Know Us
Make Money with Us
Amazon Payment Products
Let Us Help You
EnglishChoose a language for shopping. United StatesChoose a country/region for shopping.
© 1996-2021, Amazon.com, Inc. or its affiliates