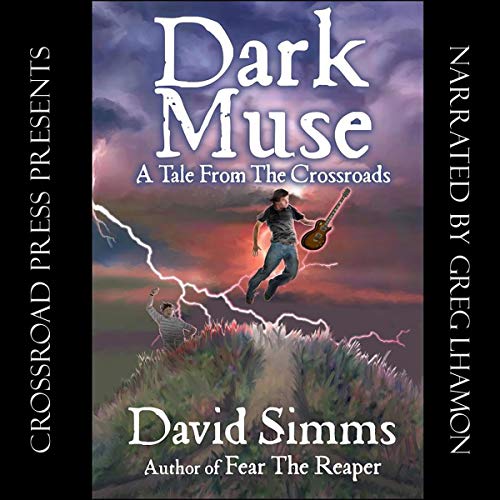 Dark Muse: A Tale from the Crossroads

Does music have the power to invade the soul?

Thirteen-year-old Muddy Brooks has always wanted to fit in with the "regular" crowd in a small town in New Jersey. He hopes that his band, The Accidentals, helps gain him acceptance into the world where he has always stuck out like a broken thumb. When his older brother disappears at the crossroads while playing a mysterious song, Muddy plunges into a world of music where songs come to life, where musicians find their inspiration, what price they must pay for fame. He must learn to harness the power of the legendary crossroads and conquer what lies on the other side. A series of trials that inspired classic songs awaits the teens, each deadlier than the next, each testing their newfound powers.

Along with drummer Otis, singer Poe, and saxophonist Corey, each battling their own disabilities or demons, Muddy must cross the river that is the source for all creativity. The band fights a world alive with unimaginable horrors and realize their path to redemption is hindered by two obstacles that may destroy them: The Tritons, vicious inhuman leaders of the strange world, and the Dark Muse, a something, or someone who wields the full power of the River. The band’s journey calls for them to build a stairway to heaven, sail through smoke on the water, become iron men, and walk that way across the abyss. But their ultimate battle may prove in vain - it might not save Muddy's brother from the darkness - or awaken something far more deadly.

L. Meredith McMullan
5.0 out of 5 stars Another great book by Simms
Reviewed in the United States on December 13, 2019
Verified Purchase
Excellent book! I learned about this while attending one of Simms' talks about "Fear the Reaper" and ordered this book with my teenaged son in mind. Since my son was in the middle of reading something else, I took the opportunity to dive into it. I thoroughly enjoyed reading this, and hope for more like this from David Simms.
Read more
Helpful
Report abuse

Scott L. Pratt
5.0 out of 5 stars fantastic storytelling
Reviewed in the United States on November 30, 2013
Verified Purchase
I purchased a copy of this book last night, and was pleasantly greeted with a fantastic book. I happened to see it posted in a Facebook post and the cover intrigued me. Once I started on the journey within, I was in for the long haul! This is a fantastic book, and I highly recommend it!
Read more
One person found this helpful
Helpful
Report abuse

Kindle Customer
5.0 out of 5 stars Awesome addition to any YA library
Reviewed in the United States on November 15, 2013
Verified Purchase
Great story with some unlikely heroes. Dave paints a world just realistic that one believes there IS a crossroads with powers beyond those we know. Plus, it's never to early to learn about REAL rock and roll!
Read more
One person found this helpful
Helpful
Report abuse

Todd A Simms
5.0 out of 5 stars Don't pass this one up.
Reviewed in the United States on March 17, 2016
Verified Purchase
He's my brother, and I still liked it. Hope it's made into a movie someday!
Read more
One person found this helpful
Helpful
Report abuse

Kate Chopin
4.0 out of 5 stars Dark Muse- A Must Read
Reviewed in the United States on July 24, 2013
Verified Purchase
This is a fast paced tale that combines horror, action, music, and friendship. Any music lover will appreciate the musical premise behind the book. If you are looking for a good read that is different from a lot of the young adult novels out right now, this book delivers action with heart, humor, and most importantly, music.
Read more
2 people found this helpful
Helpful
Report abuse

S. Love
5.0 out of 5 stars Where Music Is Magic
Reviewed in the United States on August 6, 2015
Imagine a world where music renders magical powers and mystical creatures feed on human flesh. Then figure in a few booby traps. This is where Muddy Rivers and his gang takes us in search for his brother, who has vanished. Of course, the characters need a mentor to guide them. An old blues player called Silver Eye steps up to the plate. After being confronted by this group of teenage misfits, Silver Eye offers them peculiar yet exceptional instruments to carry as protection. He teaches the kids as much as they will allow and shows them the way to this other realm. Then he warns them to train with him before beginning their quest for Muddy's brother. Restless, they sneak in ahead of their teacher and face disastrous consequences.

David Simms brings the story alive with his unlikely heroes and the fantastic obstacles they must overcome. Not only is it action packed, it joggles the brain with lyrical teasers. He consistently entertains the reader with complex barriers throughout the book.

Although Dark Muse is meant for young adults, l found myself immersed in the story. If it weren't for family responsibilities, I would have finished it in one day. But, alas I had to get to the last fifty pages the following night. Meanwhile, I couldn't stop thinking about how it all would end. I rooted for the characters and cringed when they fell into trouble. But I felt especially endured to Silver Eye—a very cool card. As someone with absolutely no musical ability, I also learned a bit about the art-form. In the end I was pleased that I picked it up. Otherwise, I would have missed an amazing journey.

I recommend this book to anyone who likes fantasy. It's a fairly quick read and is sure not to disappoint.
Read more
Helpful
Report abuse

John M. McIlveen
5.0 out of 5 stars A mystical, rockin' romp with heart.
Reviewed in the United States on August 18, 2015
In DARK MUSE, Dave Simms weaves a wonderful and involving tale of music, magic, and monsters, as we follow teenager Muddy Rivers and his cast of unlikely friends on a search for his missing brother. With the assistance of an old blues musician - a cool cat known simply as Silver Eye - who teaches them that music is magical beyond their wildest dreams. Musical instruments become weapons and shields for the group of “flawed” young warriors in this story as they begin a quest in an alternate realm to battle bloodthirsty mystic creatures, maneuver through obstacles, and solve lyrical (well thought out) brainteasers.
Simms shows his knowledge of today’s youth well in this quick and fun journey, packing it with endearing and honest characters who deal with genuine problems like learning disabilities, divorce, bullying, prejudice, and young love… all set around classic rock and roll.
Targeted for YA, but will appeal to the adult fantasy/horror market as well. Highly recommended.
Read more
Helpful
Report abuse
See all reviews

Anfield Red
5.0 out of 5 stars Harry Potter meets the Edge.
Reviewed in the United Kingdom on July 30, 2013
Verified Purchase
Just to be honest I am a little bias as my cousin Dave is the author of this book. But I totally enjoyed it from first electronic page to the last. I wont spoil it but am looking forward to Dave's next release.
Read more
Report abuse
See all reviews