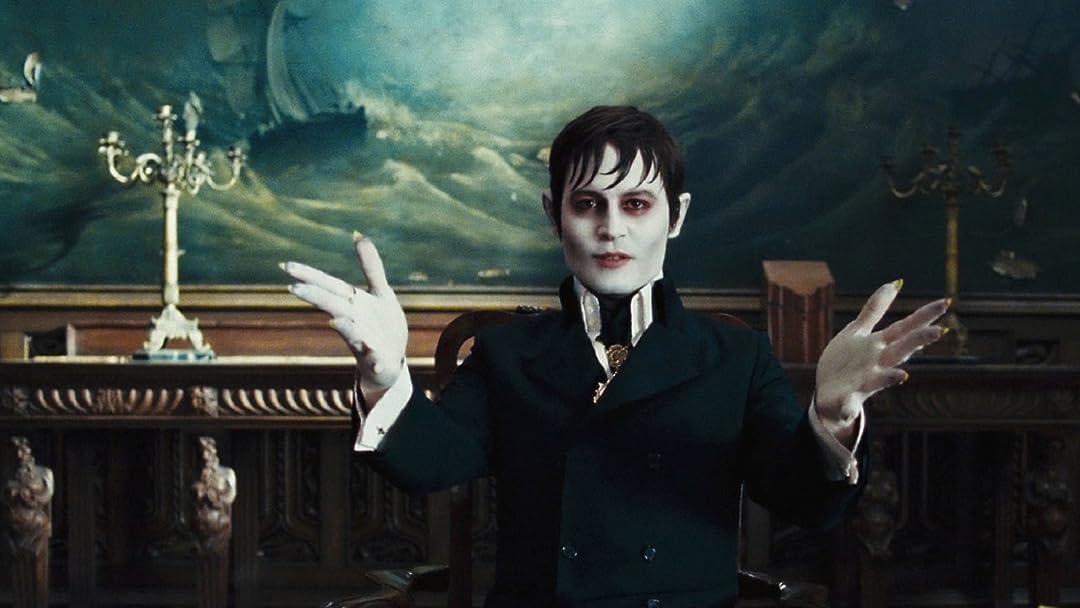 Mark N.Reviewed in the United States on August 22, 2018
5.0 out of 5 stars
As a "stand alone", "Dark Shadows" is a fun and satirical movie to watch. I really enjoyed it!!
Verified purchase
Four of my favorite actors; Michelle Pfeiffer, Johnny Depp, Helena Bonham-Carter and Eva Green are in this movie and they are the reason I watched it for the first time. But I should start this review by saying I was very young when the original series was first broadcasted and I could only recall a scant amount of snippets of the original soap series but because of those memories I gave this movie a chance. A few years after having watched it I've read accounts online about how some hated this movie. There was a lot of criticism about the choice of actors and about the script and the acting. Personally I enjoyed this movie, though at the time I first watched this movie I had yet to order the original series on DVD which I had begun to do late last year. I can understand some of the criticisms of this movie after watching collections 1 through 8 of the original series so far, yet as a "stand alone", "Dark Shadows" is a fun and satirical movie and yes because of our current technology it does veer away from the low budget original (which I thoroughly love!!) and even though some didn't appreciate that, it makes sense that it would have to in order to condense portions of the storyline of some 200 plus episodes of the original series into an approx. two-hour long movie. No current actors could ever replace Fridd, Bennett, Edmonds, Moltke, Barrett, Crothers, Karlen, Scott, Hall or any of the other original actors and that really goes without saying but all in all this movie was fun to watch. I really enjoyed it!! I recommend this movie as a sort of "1rst cousin, twice removed" of the original series!!
28 people found this helpful

AnnReviewed in the United States on October 26, 2018
5.0 out of 5 stars
Love this movie so much!!!!
Verified purchase
This is one of my favorite movies! Before I watched this, I had not seen the Dark Shadows soap opera, but I knew about it. I have since watched quite a lot of the series.

The 1 or 2 star reviews that say it's not like the series are right, but the original Dark Shadows had lots of flaws. It's a good thing this does not feel like a soap opera.

The visuals are wonderful, as usual with a Tim Burton production. Johnny Depp is a very funny and very likeable Barnabus Collins. Eva Green is wonderful, as is Michelle Pfeiffer, and all other castings are very well done. This does follow similar storylines as the old series.

Jerry A. ConferReviewed in the United States on January 25, 2021
1.0 out of 5 stars
Depp Doing for Dark Shadows what he did for the Lone Ranger.
Verified purchase
What a waste of a seriously great cast.
It is incredible that anyone can manage to create such slop from this cast.
The material was always awful - even back in the day, Dan Curtis should have been ashamed!
Slow, cheesy, and badly directed - we ate it up - running home from school to get in front of the TV in time for the 4pm showing.
Watching Jonathan Frid drag the corpse that was that show around was like watching a road accident in progress.
This movie, for all the CGI, has not one bit of the cheesy charm of the original.
Miss this or waste your time with regret.
8 people found this helpful

joel wingReviewed in the United States on November 14, 2020
3.0 out of 5 stars
Tim Burton turned the story into a dark comedy with Barnabas trying to figure out 1970s America
Verified purchase
Dark Shadows was a 1970s cult classic TV show about the Collins family of Maine that included Barnabas Collins who was a vampire. Tim Burton made it into a dark comedy featuring Johnny Depp as Barnabas. It plays upon the dysfunctional Collins family and Barnabas attempting to adapt to the times.

The movie begins by laying out how all the people in the Collins family are eccentric. That means when Barnabas shows up he fits right in. The comedy comes from him trying to figure out the 1970s. For instance when he first returns he sees a McDonald’s sign and thinks the “M” stands for the demon Mephistopheles. Then he sees a car for the first time and thinks the headlights are the Devil come to take his soul. Instead it’s an American muscle car that just honks its horn at him for standing in the middle of the road.

The movie has the look of a typical Burton film with plenty of dark tones. Depp does a good job with the role and the out of place/out of time twist of Barnabas works.
C
5 people found this helpful

Deborah M. OkeyReviewed in the United States on December 24, 2019
1.0 out of 5 stars
IS THIS SUPPOSED TO BE A COMEDY OR A DRAMA?
Verified purchase
I was a big DS fan when I was a kid, so I was anxious to see this movie. But it leaves me with the same question many of Tim Burton's films leave me with. Is this supposed to be a comedy or a drama? It really isn't funny enough to be a comedy, and it is too "campy" to be a drama. I guess Burton really isn't my cup of tea, except for the original _Batman_ with Michael Keaton and Jack Nicholson. That was a really good film, and Michael Keaton in that black turtleneck in the Batcave . . . be still, my heart. :-D
11 people found this helpful

S. GalloReviewed in the United States on May 19, 2021
1.0 out of 5 stars
Terrible
Verified purchase
Danny Elfman is the only shinning part of this movie. He's the lead singer from band Oingo Bongo back in the 80's. He put together a good sound track for the movie. Other than this the movie sucks.

There is no continuity with the plot. The script has a few moments which are funny, but it can't make up its mind if it is a drama or a comedy. One moment it is serious, then it becomes a cartoon.

The character development is terrible. One moment the character has super powers, then the powers are taken away with our rhyme or reason. When needed, they throw something in to the mix just to keep the plot going just enough, but it lacks continuity. So you go from vampire with amazing powers, to a vampire that can't do anything. A witch with endless super powers, then a witch with out any powers. Need a werewolf? Throw one in at the end just to fill the empty spots. Need to end the movie? Sure, just end it because we are lazy.

People will say that this pays homage to the original tv series, but I find it to be a contemptuous. It is an insult to anything remotely related to that series.
3 people found this helpful

ARayFReviewed in the United States on August 21, 2019
4.0 out of 5 stars
Funny and pretty weird
Verified purchase
Some laughs and some WTF moments, some odd visuals, and a story interesting enough to keep you interested. Nothing special or outstanding, but worth a rental and a watch. Depp is definitely good at odd-ball characters, and brings it in this movie, just not at any outrageous level. If you pay extra attention you might get a couple extra laughs at things easily missed otherwise.
4 people found this helpful

E. RohmanReviewed in the United States on November 13, 2019
4.0 out of 5 stars
Johnny Depp as Jack Sparrow in a Tim Burton Movie
Verified purchase
This movie is campy fun - but I wish it would have picked a genre - comedy or horror??
Tim Burton has daddy issues...Johnny Depp has become a cliche of himself, but Michelle Pfeiffer, Eva Green and Helena Bonham-Carter turn in some fun performances here. Don't expect Oscar level material here, folks.
7 people found this helpful
See all reviews
Back to top
Get to Know Us
Make Money with Us
Amazon Payment Products
Let Us Help You
EnglishChoose a language for shopping. United StatesChoose a country/region for shopping.
© 1996-2022, Amazon.com, Inc. or its affiliates