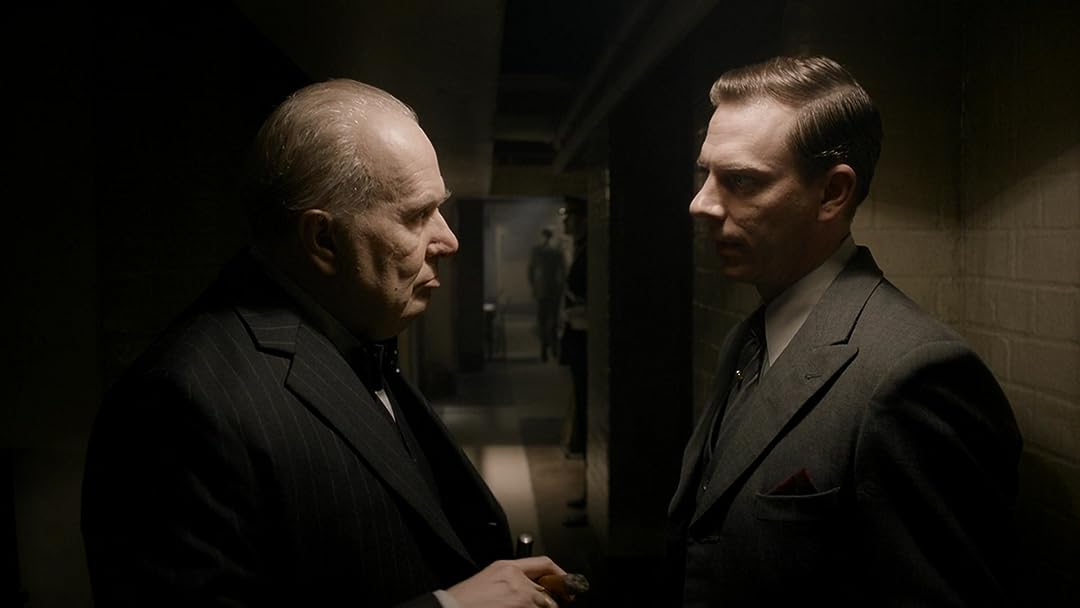 Kate WReviewed in the United States on February 9, 2018
5.0 out of 5 stars
Superb performance by Oldman!
Verified purchase
I literally just read a 1 star review of this movie because the person was offended by Churchill (Oldman) lighting up a cigar. That person obviously overlooked the entire movie over the fact that Churchill did smoke cigars, often. Anyway... I digress.

If Oldman does not win the Oscar for best actor for his portrayal, I might just have to quit watching movies (which would make me very sad). His performance was so stunning. There was never a time during the film that I didn't think I wasn't watching the actual Winston Churchill. Just the mannerisms, posture, detail to the voice of Churchill, Oldman's portrayal was perfection. The outstanding makeup only added to Oldman's performance.

I did read some reviews that said this movie was completely historically inaccurate. My response to that is: A) it's not a documentary, and B) the major points were accurate. My husband is an avid student of WWII history, and he felt the movie was phenomenal. It's Hollywood, they are going to dramatize things. If you want complete historical accuracy, watch a documentary.

The cinematography was very interesting. It matches the movie's title poster. Very lighted on Winston, but a feeling of a vignette of darkness around him. Sometimes the effect was softer, and others it was very sharp and contrasting. I felt this added some emotional depth to the movie, and added some insight to how isolated he felt during his first days as PM.

I am probably going to watch The King's Speech, Darkest Hour and Dunkirk in that order on the same day...

ChainsawReviewed in the United States on February 7, 2018
5.0 out of 5 stars
THIS MAN REALLY WAS ... AND WE ALL SHOULD BE GRATEFUL!
Verified purchase
Over past decades I've often viewed film-clips of Sir Winston Churchill's various speaking engagements. When, several minutes into this film, I watched a closeup of Gary Oldman's portrayal in giving one of Churchill's speeches ... Oldman BECAME Churchill right before my eyes! A marvelous performance. The reality was there, the sincerity and believability of that day-and-time were convincingly genuine. I doubt some of the scenes depicted actually took place in real life, but they all lent themselves well to the core of the story, and the magnificence of Sir Winston Churchill. In all the annals of time, never have I read of any such perfectly timed, perfectly prepared, group of men who came together at the right time, in the right places to defend the world against evil as they did in World War 2 - and Sir Winston Churchill was one of those men. The movie is of the "must see" category - especially if one is interested in statesmanship.
213 people found this helpful

A. G. VanderplaatsReviewed in the United States on December 26, 2017
5.0 out of 5 stars
History does matter
Spent just over two hours Christmas Day sitting with my wife in a packed theater here in Fort Myers, FL being transported back in time as I watched Gary Oldman deliver the best acting job of his life. The Darkest Hour may not be a factual, moment by moment account of what took place in those critical few days before the British people in their little boats managed to pull off one of the most unbelievable rescues of all time, but it sure has all the rich detail one would expect to read about in the most authoritative historical account. The only thing missing IMHO, were young people in the theater, who apparently find the pure fiction of the latest 'Star Wars' episode more appealing. One can only hope their parents, or grandparents take the time to bring them to see this so that can better understand why the study of history really does matter. Hats off to those responsible for creating this masterpiece.
449 people found this helpful

Bob E.Reviewed in the United States on April 8, 2018
3.0 out of 5 stars
Interesting, often more fiction than fact
Verified purchase
This movie often portrays Churchill as a doddering old fool: He was anything but that! I've read other books on Churchill, listened to his speeches and film clips; this movie misses more than it hits. There are several Darkest Hour fact checking websites dealing with the accuracy of the events, timelines, relationships, and characters' personalities; they also found the movie interesting but lacking. For instance Churchill's famous "We shall fight them on the beaches" speech was made six days after the rescue of the troops from Dunkirk, not before. His confidence came because England had received back 300,000 of her troops and not merely hopeful but empty bravado. The idea of using private vessels to help rescue soldiers was not originally Churchill's; the Admiralty had the idea and preparations in place weeks ahead of the event. Don't prep for a history test based on this movie.
45 people found this helpful

BosMAReviewed in the United States on March 15, 2018
5.0 out of 5 stars
See it for the acting and the history lesson
Verified purchase
Gary Oldman deserved the Oscar he won. When I saw him on the Hollywood stage, I would hardly have believed the movie character was the same man. I liked Lily James and Kristen Scott Thomas, too; their performances were very strong.
I do quite a lot of reading about World War II. This movie covers the time period people hear much less about: the eve of war for Britain when Churchill struggled to persuade the British parliament that the only way to deal with Hitler was war. I heard some twenty-somethings make fun of this movie recently, and that dismayed me. May they one day have the courage to stand up to tyranny even half as well as Churchill and his generation did.
36 people found this helpful

Robin Hood Forest of DeanReviewed in the United States on December 14, 2018
1.0 out of 5 stars
Terrible, Just a Churchill hate fest
Verified purchase
Non-stop Churchill put down. The movie doesn't try to depict the story of Britain's darkest hours during the early years of WWII. Instead, it shows a series of events where Churchill is depicted as a stupid idiot who is constantly ignoring his
brilliant generals and politicians, and making dumb decisions. The movie is unwatchable by any British patriot or anyone cares about the truth. Its a re-write of history that I found offensive.
27 people found this helpful

wisdomstarReviewed in the United States on March 1, 2018
5.0 out of 5 stars
Churchill - still wonderful after all these years
Verified purchase
I've always been a fan of Churchill. I own THE GATHERING STORM with Albert Finney as Churchill and Vanessa Redgrave as Clemmie, which is about the years before this movie and INTO THE STORM which is about what happened after the war. So this one fits nicely into the middle of the collection. However, there was a lot I did not know about those first days of him in office. I was surprised that Neville Chamberlain was still being listened to after his disastrous agreement with Hitler. And I was impressed with King George. Gary Oldman, of course deserves the Oscar for best actor. He entirely disappears into his character. But all the other actors were superb as well. Kristin Scott Thomas is a wonderful Clemmie. And Lily James is wonderful as the insecure secretary. The actor who plays the King should also get a nomination. I recommend that if you like this movie, you look up the other two here on amazon.
25 people found this helpful

MJReviewed in the United States on February 9, 2018
5.0 out of 5 stars
I really enjoyed the movie
Verified purchase
As an American, I've only known WWII from the US perspective. This is a very moving film that gives an insight and testament to the core pride of the British people to never give up even in the face of dire adversity. Courage in the face of doubts. I really enjoyed the movie. The actor playing Churchill was phenomenal. This has got to win an Oscar.
55 people found this helpful
See all reviews
Back to top
Get to Know Us
Make Money with Us
Amazon Payment Products
Let Us Help You
EnglishChoose a language for shopping. United StatesChoose a country/region for shopping.
© 1996-2021, Amazon.com, Inc. or its affiliates