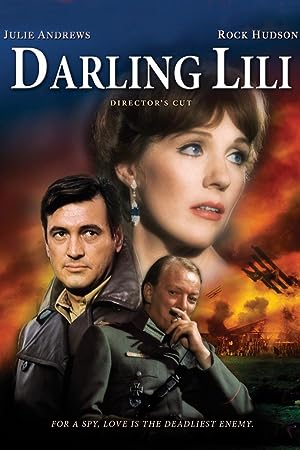 (347)
6.12 h 23 min1970G
Julie Andrews made a bid to change her squeaky clean image with this elaborately mounted WW I musical. Lili Smith (Andrews) is a popular British music hall singer who is regarded as a femme fatale and has been known to throw a bit of striptease into her act.

S. KimballReviewed in the United States on December 27, 2016
1.0 out of 5 stars
Beware, director's cut ripoff.
Verified purchase
I bought this several years ago and was disappointed that some of my favorite scenes were deleted in the directors cut. They are not the same out of context as extra features. My sister gave me another copy for Christmas thinking it was the uncut version. She was very upset when it arrived and was the director's cut which had not been stated in the description. She paid a lot more than she could afford trying to give me a nice Christmas surprise. It was the same as I had. Amazon has to clarity their description on this DVD.
19 people found this helpful

V. Risoli-BlackReviewed in the United States on September 10, 2015
5.0 out of 5 stars
"Darling Lili" Should Be Re-Discovered
Verified purchase
I must have bought the only new copy of this film as an import left and I got from one of my most reliable sellers for a steal price of $5.00 plus shipping. I am so glad I did as it was the original 137 min. version as the film was originally released. I am not quite certain now why the film was a flop, as it was a major work by producer/director Blake Edwards from 1970. He co-wrote the script with William Peter Blatty, and it had very much Blake Edwards's stamp. Henry Mancini and Johnny Mercer wrote some wonderful songs for it: the Oscar-nominated "Whistling in the Dark," "I'll Give You Three Guesses," "Smile Away Each Rainy Day" and the title tune among them. There are a lot of military-themed old standards used in the score by Mancini like "It's a Long Way to Tiperrary" and such. Perhaps that is my chief complaint is the typical jolly time the characters seemed to have while playing spy vs. spy during wartime. The movie has pretty much the "Mata Hari" kind of premise. With matters ever darkening in the news and all the politician's today looking to boost our war efforts and our military, I looked from a distance, but acquiesce to the humor. Julie Andrews, because the film was such a costly flop, lost her box office clout, but she seemed ready for a change, if possible. Rock Hudson was cast opposite her, and he seems adequate. Jeremy Kemp has third billing as her seductive Nazi "uncle." You can certainly see pieces of "The Great Race" and "The Pink Panther" series and later efforts like "Victor/Victoria" in it and I was very happy with the PAL playing Paramount disc as the newer "Director's Cut" on the market, more expensive and, according to reviewers who claim the edited film is too choppy to almost unintelligible without the missing footage, I would have wished to see the full film. I seriously doubt Blake Edwards would prefer the shortened version given that the 137 min. film would have been more appreciated, In color with Dolby Digital sound.
6 people found this helpful

Byron KollnReviewed in the United States on November 24, 2005
4.0 out of 5 stars
"Often I think this sad old world is whistling in the dark..."
Verified purchase
DARLING LILI is a positive delight, though sadly the film was a huge box-office flop and virtually sunk Andrews' film career until "10", S.O.B. and VICTOR/VICTORIA came along a decade later. This film stars Andrews as Lili Smith, a beautiful and adored singing star in England who moonlights as a WW1 German spy. One night, "Uncle Kurt" (Jeremy Kemp) gives Lili her latest assignment: Major Bill Larrabee (Rock Hudson). Lili must make Larrabee fall in love with her, and hopefully let slip some important confidential information that could come in handy for the Germans. Once Lili has Bill firmly in her sights, it becomes clear that this is not her usual "kiss-and-tell" seduction job....she has truly fallen in love with him.

Julie Andrews simply glows as Lili, and delivers a deft performance. Although she indeed plays a spy working for the "Enemy", the audience oddly enough loves her anyway and wants her to escape in the tension-filled final sequence. Rock Hudson is a comical and romantic delight as Larrabee. The support cast includes Lance Percival, Gloria Paul, Jacques Marin, Doreen Keogh and Bernard Kay.

The musical score by Henry Mancini and Johnny Mercer is truly beautiful, one of the best of the entire decade. When Andrews emerges out of the blackness in the first scene to sing "Whistling Away the Dark", it is indeed one of those chill-inducing moments. Andrews' musicality in this film was quite accomplished; she sings with a smokey timbre in her voice which she rarely displayed before or after DARLING LILI. Other choice moments come in the Music Hall-schmaltz of "I'll Give You Three Guesses" and the sobering "Girl in No Man's Land". Costume designer Donald Brooks decks Julie out in a splendid array of period-perfect ensembles (he also costumed Julie in STAR!).

I simply adore this film. DARLING LILI was never made available on videocassette, and appeared only rarely on cable. Director Blake Edwards, in a bid to make the film more palatable for audiences following it's disastrous theatrical release, re-cut the film in a "Director's Cut", and that is the version you get on this DVD. The original theatrical length was 136 mins (the "Director's Cut" runs for a brisk 107 mins, not counting Overture and Exit Music sequences). The transfer is very sharp and the audio is offered in both 5.1 and 2-channel stereo. The cut scenes are all offered as bonus material, so in effect the entire film is here, albeit in pieces. Paramount might hopefully release the uncut LILI one day, but until then, you could do a lot worse than the "Director's Cut". Highly-recommended from this corner.

POSTSCRIPT (29th May 2007): DARLING LILI is now available in it's original uncut form, via the new Paramount DVD editions from the UK and Australia.

Dr. William A. RieckReviewed in the United States on October 30, 2005
4.0 out of 5 stars
Finally here, but not complete
Verified purchase
When Amazon e-mailed me that Darling Lili was finally being released on DVD I was ecstatic. Unlike many critics I thoroughly enjoyed the film when it was first released. I nice romantic spoof, I thought. I still do, but with a little disappointment. As I watched my memory seemed to recall things not in this version. When I saw the special features and some additional scenes I found what was missing. The package indicates a 107 run time, but the original, according to Maltin's book, was 136 minutes. In making the "directors cut", Blake Edwards has cut too much. If it were up to me I would include the slightly longer version of the first dogfight. I would also keep the little bit where the French inspectors mistake Jeremy Kemp for a head waiter. I would also retain the charming sequence with the children marching and singing. Finally, it is almost a tragedy the way the scene at the Inn was edited; several very humorous bits were left on the cutting room floor. All this aside, it is still an enjoyable film with a nice mix of drama, a little music, a great deal of romance, and some humor; just not as much humor as the original.
11 people found this helpful

L TacheReviewed in the United States on July 15, 2016
5.0 out of 5 stars
Darling indeed - this is light, breezy and fun
Verified purchase
The songs in this are superb . . . I especially love Whistling in the Dark and The Girl in No Man's Land.
Beautifully sung by Julie Andrews at her peak . . pitch perfect purity . . . a joy to the senses . .
The story is amusing enough . . a fairly light weight, saccharin coated version of a war story, with a few subplots . . a bit tongue in cheek . . and indeed a light comedy .. some very funny patches ( my faves, wheelchair, and roof)
I loved it on each of the 8 occasions I've seen it in my life . . . Rock Hudson is especially beautiful to look at . . hubba hubba . . and the French countryside is very beautiful too
Suspend disbelief and let yourself go along for the ride . . very pleasant on the eye and ear
Won't suit high brow types - mind you I've got 3 degrees and I loved it - depends what mood you're in
3 people found this helpful

le from OhioReviewed in the United States on December 17, 2019
4.0 out of 5 stars
A favorite Julie Andrews movie
Verified purchase
Darling Lili has always been a favorite movie of mine, especially the music. The movie is still good but one favorite song, Skal, sung by the flyers in a barroom has been completely cut out! Why?

C. PierceReviewed in the United States on September 23, 2021
5.0 out of 5 stars
Love this movie!
Verified purchase
This is one of my favorite movies, and was thrilled to find the director's cut! If you are a Julie Andrews fan, you will enjoy this film!
See all reviews
Back to top
Get to Know Us
Make Money with Us
Amazon Payment Products
Let Us Help You
EnglishChoose a language for shopping. United StatesChoose a country/region for shopping.
© 1996-2022, Amazon.com, Inc. or its affiliates