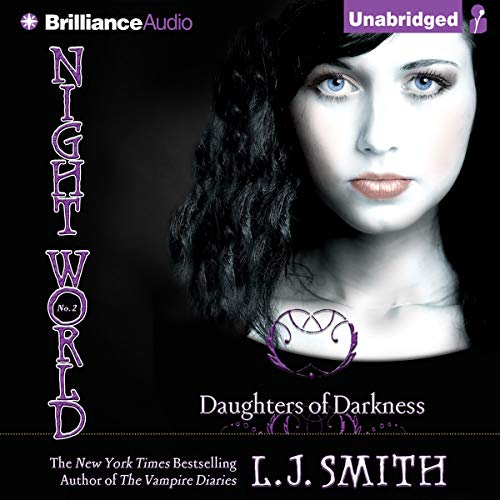 L. J. Smith (Author), Emily Durante (Narrator), Brilliance Audio (Publisher) & 0 more
4.8 out of 5 stars 199 ratings
See all formats and editions
Sorry, there was a problem loading this page. Try again.
The series takes place in a world similar to our own but one where vampires, witches, werewolves and shape-shifters live among humans without their knowledge. These supernatural races make up a secret society known as the Night World, which enforces two fundamental laws to prevent discovery: 1) Never allow humans to gain knowledge of the Night World's existence and, 2) Never fall in love with one of them.

Mary-Lynnette, 17, loves to watch the stars from her Oregon backyard. Then one day, she thinks she's witnessed a murder through her telescope. She's wrong: it's only three vampire sisters burying their mysteriously-killed aunt. The sisters, Rowan, Kestral, and Jade ran away from their enclave home to live the lives of regular teenagers. However, when their brother Ash is sent to bring the girls back, he falls in love with Mary-Lynnette. But will she accept him because of his lurid vampire past and can a now-repentant Ash convince Mary-Lynnette to let him atone for his former sins and be his soulmate?
Read more
©2009 L. J. Smith (P)2009 Brilliance Audio, Inc.
Previous page
Next page

Your audiobook is waiting!
Learn more about membership
List Price: $25.19
You Save: $8.20 (33%)
By completing your purchase, you agree to Audible’s Conditions Of Use
Sold and delivered by Audible, an Amazon company

Kindle Customer
5.0 out of 5 stars Will they get their HEA?!?!
Reviewed in the United States 🇺🇸 on October 12, 2018
Verified Purchase
I bought this book and the first book in this series in the original release. And I'm so happy that the editing issues have been fixed.
I haven't read the rest of the series my main question is will Ash and Mary-lynnette be seen in the it finally together? I hate cliffhangers ugh closure I need it
Read more
Helpful
Report abuse

EB
5.0 out of 5 stars Good series
Reviewed in the United States 🇺🇸 on March 10, 2018
Verified Purchase
Good addition to the series. I enjoyed it.
Read more
Helpful
Report abuse

Stephanie Bui
4.0 out of 5 stars Remarkable.
Reviewed in the United States 🇺🇸 on June 23, 2009
Verified Purchase
I loved the action part!! Also, sometimes I wished Mary-Lynette could just embrace the fact that she loves Ash! I could fall in love with Ash myself! haha!
Read more
One person found this helpful
Helpful
Report abuse

Bookaholics Bookshelf Reviews
4.0 out of 5 stars 4 Stars:
Reviewed in the United States 🇺🇸 on July 8, 2016
I have had this since the 90's and love it!

The mystery element of the book is pretty interesting. The three sisters are intriguing, and Ash, who was introduced in the first book, does a turnabout and becomes a guy any girl would want to marry.

Among some of my favorites. Outstanding literary work. The characters are well developed, interesting. The liked characters are likable and the hated are unlikable. The writing is captivating enough to keep you interested until the end and leave you wanting more. It has a fairly original or uniquely well-developed plot. The pretense and romance was well balanced and done with properly distributed amounts of hints, behaviors and chemistry. Not so much predictable if at all. Overall, loved it, I recommend reading!!
Read more
Helpful
Report abuse

Deidre Huesmann
4.0 out of 5 stars Vampires And Mystery? You'd Be Surprised
Reviewed in the United States 🇺🇸 on January 12, 2008
Mary-Lynnette's wants seem simple enough. She likes her quiet life, stargazes as a hobby, bases her life around becoming an astronomer, and hopes the three new girls moving in next door with the kindly, if eccentric, Mrs. Burdock will help to bring her shy brother, Mark, out of his shell.

Unfortunately, what she ends up with is a murder mystery, romance she doesn't want, and oh, yeah, those three new girls are vampires with a dangerous older brother coming to drag them back home.

There are a LOT of characters to focus on, as per usual with a murder mystery. We have Mary-Lynnette, Mark, the three sisters Rowan, Kestrel, and Jade, their brother Ash, and the local werewolf, Jeremy. And those aren't even the suspects. The endless supply of characters in such a short amount of pages is a little overwhelming, with so many aspects of so many characters not fully explored. But what really gets the reader, even the fans of over ten years, is the star-crossed attraction between Mary-Lynnette and Ash.

It's a bumpy road, to put it lightly. Mary-Lynnette is a simple, if nosy, human girl, while Ash is a dangerous, well-known vampire--and not well-known in the good sense, in Mary-Lynnette's book. Understandable; in Secret Vampire and Daughters of Darkness it's implied he's killed human girls and worse. There are very subtle hints at sexual abuse toward human females that younger readers may miss, but the words are enough to paint a picture that Ash is Very Bad.

Many fans complain at the ending, but it is the ending that keeps them so captivated with these two. Mary-Lynnette wants to finish high school. She can't see herself with Ash as he is now, knowing his past. Ash is sorry and wants to repent, by the end of the novel, but wanting isn't enough. Mary-Lynnette is dealing with a soulmate who is potentially mentally unstable, definitely cruel, and by all human means, a classified felon (if he could be traced, that is).

L.J. Smith did well in ending the story with no conclusion (which she has promised the fans would come at the end of the series for years; ten years later and still nothing). Ash needs room to grow in order to be someone Mary-Lynnette will not regret willingly falling in love with.

This is a good book, by no means the best, but excellent for the series. It was the second book I read (no, Secret Vampire was not the first) and ultimately the one that got me hooked.

Here's to hoping the Mary-Lynnette/Ash fans get closure in the near future. Publishers, don't keep faithful fans in suspense!
Read more
One person found this helpful
Helpful
Report abuse

VampireNovelFan
4.0 out of 5 stars Worth a read
Reviewed in the United States 🇺🇸 on November 30, 2011
Book 2 of the Night World series, Daughters of Darkness, shifts focus to a new set of characters of the secret society. Relatives of James from the first book, we meet Rowan, Kestrel, and Jade. They are three vampire sisters who snuck away from home. Tired of the secret society, they want to try to live as humans out in Oregon. They move into a dilapidated old home, next to Mark and Mary-Lynette Carter. As Jade and Mark get closer, their brother Ash comes to town to bring his sisters back. Of course, he meets Mary-Lynette and things get interesting...

Ash, the handsome blondie who we remember from the first book as being a conniving, selfish, and manipulative, experiences a bit of growth in this book. In the first book you would have never thought it would happen, but I was glad to see the character development.

What I like about the Night World books is that while you could read each book separately as a stand-alone, it's great to see prior plot lines and character weaved into the current story. It makes you feel even more connected to the story and the world.

These books are short reads, but I find them pretty satisfying because the plot moves along and it focuses on what you really want to see.
Read more
One person found this helpful
Helpful
Report abuse
See all reviews

Kindle Customer
3.0 out of 5 stars 2/10 this time it's witches and it's cool
Reviewed in the United Kingdom 🇬🇧 on November 24, 2019
Verified Purchase
When this came out in print, I read this book before Harry potter and I enjoyed it. 20 years have passed and I still enjoy rereading it
Read more
Report abuse

Joanna Foster
5.0 out of 5 stars Good series, this ones my fav
Reviewed in the United Kingdom 🇬🇧 on July 28, 2018
Verified Purchase
Read this years ago and loved it. I recently bought it again when I came across it. It's a fun vampire romance story with a little murder mystery thrown in. Not to heavy, easy read. My favourite of the series.
Read more
Report abuse

MISS C E COX
5.0 out of 5 stars Fantastic
Reviewed in the United Kingdom 🇬🇧 on May 8, 2013
Verified Purchase
I have always loved this book and to be honest, this is the second copy of this book I have bought because the first book is warn out. I love the whole series. It's better than twilight.
Read more
Report abuse

Amazon Customer
5.0 out of 5 stars Teenager book
Reviewed in the United Kingdom 🇬🇧 on October 31, 2013
Verified Purchase
My teenage daughter bought this book and when asked said its awesome and very addictive reading....so id say its a winner!
Read more
Report abuse

Nan Fry
5.0 out of 5 stars Delightful
Reviewed in the United Kingdom 🇬🇧 on April 3, 2015
Verified Purchase
A love story with an edge. I didn't see the twist in the tail. Will be looking out for the whole series.
Read more
Report abuse
See all reviews