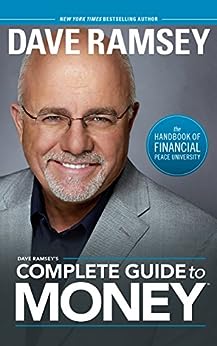 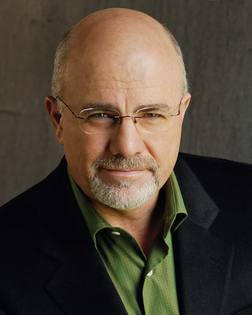 I received this book via a secret Santa Christmas party and never heard of Dave at the time. I read it and found out that I did all the debt myths in my life time, as Dave mentioned I was ignorant to the fact that these type of myths were the reason I was in debt. However as of today I now own my car, I am almost debt free and am paying for my future wedding with cash. Also thanks to this book I was able to talk a salesman down to $29 dollar from $80 for a gift my future wife really wanted --This text refers to the hardcover edition.

Dave Ramsey is America’s trusted voice on money and business. He’s authored seven best-selling books: Financial Peace, More Than Enough, The Total Money Makeover, EntreLeadership, The Complete Guide to Money, Smart Money Smart Kids and The Legacy Journey. “The Dave Ramsey Show” is heard by more than 13 million listeners each week on more than 585 radio stations and digitally through podcasts, online audio streaming and a 24-hour online streaming video channel. Follow Ramsey on Twitter at @DaveRamsey and on the web at daveramsey.com. --This text refers to the hardcover edition.

I received this book via a secret Santa Christmas party and never heard of Dave at the time. I read it and found out that I did all the debt myths in my life time, as Dave mentioned I was ignorant to the fact that these type of "myths" were the reason I was in debt. However as of today I now own my car, I am almost debt free and am paying for my future wedding with cash. Also thanks to this book I was able to talk a salesman down to $29 dollar from $80 for a gift my future wife really wanted --This text refers to the hardcover edition.
Read more

4.7 out of 5 stars
4.7 out of 5
3,612 global ratings
How are ratings calculated?
To calculate the overall star rating and percentage breakdown by star, we don’t use a simple average. Instead, our system considers things like how recent a review is and if the reviewer bought the item on Amazon. It also analyzes reviews to verify trustworthiness.

McRuvin
5.0 out of 5 stars wow
Reviewed in the United States on April 5, 2015
Verified Purchase
I'm 19 years old and I don't think I could have selected a better time to buy this book. I currently work my tail off as a plumber while paying for community college. I have a new motorcycle and a newish truck and I really wanted to know where my money was going, how to invest properly, and save for retirement and with the help of this book, I plan to turn my last 3 generations of family poverty around.

Update 2019
Community college wasn’t my thing. I’m a union plumber making great money I live at home still at 23 but no complaints I help out the family all I can. I’m very money conscious to this day I only really spend money on tools for personal use and I’ve helped a handful of people with their own money problems! I feel and am told I’m ahead of the curve for my age but I’ve been very fortunate having the supportive parents that I have allowing me to live at home. Last year I made more than my mother made her entire life in any given year by a considerable margin and it was quite humbling experience given my age. I’ve taken on some family debt as well roughly 30,000 worth but they are all breathing far more comfortably as have stayed true to what I have taught them. It shouldn’t take me very long to pay that off I’m thinking 2 years maybe 3 gotta see how things go but it’s a satifying existence.

Also I have a variable life insurance plan separate from my benefits and pension/ retirement from the union. It’s about 260 a month for 10 years but it grows and based on modest projections should be worth a high 6 figure number when I’m old, it’s a neat retirement aside from a Roth or simple IRA I highly recommend
Read more
538 people found this helpful
Helpful
Report abuse

BW
5.0 out of 5 stars Total Money Makeover on Steroids
Reviewed in the United States on November 20, 2017
Verified Purchase
This book, is much needed just as the total money makeover was needed. TMM gives you the outline and guidelines to get started being financially free. This book takes each baby step and gives you step by step instructions on what to do in each baby step and why you should do it. My only regret is that I didn’t start this sooner
Read more
93 people found this helpful
Helpful
Report abuse

Amazon Customer
4.0 out of 5 stars Now I get it
Reviewed in the United States on October 10, 2016
Verified Purchase
I now know the difference between an IRA and a 401k. A regular 401k and a Roth 401k.. The best way to save for my daughter's college. I also understand that financial security is having the discipline in MY BEHAVIOR to create and stick to a budget. The stories he tells, the testimony from people who've learned and the chunks of financial knowledge he packs in every page makes this a fun and exciting read. With every chapter you feel more empowered to take control of your money. It will literally challenge just about everything you've been taught about money. The just: Don't use credit, budget down to the last cent with a plan to reduce and eliminate debt, if you use credit as often as the people around you.. If you neglect to create a budget, you'll be broke. Start by understanding where your money's going, Dave says do an audit of yourself, DON'T GUESS.

Where I started was I went online and pulled up the statements on all my bank and credit cards and literally went line by line, writing down every transaction, trying to remember exactly how and why I spent the money (most of the time they'll have the vendor on there so you'll know, but trips to the ATM are harder to figure out). I then categorized everything, you know: money spent on eating out, money spent on transportation, miscellaneous, etc. I then wrote down my bills. That gave me an accurate picture of how I had spent my money the last 30 days. Then I compared that to how I would have spent the money had I budgeted to give myself as much money as possible at the end of the month while still doing the things I liked to do. Try to be as realistic as possible. Dave says it'll probably take you 3 months/tries to get good. After this you do what's called the envelope method which is you place money in specific categories based off your budget and your audit. You cash out the money, simply because physical cash is less likely to be spent than "virtual cash". Each envelope represents and has written on it, a specific category such as "Food for the house", "going out", "books", "starbucks".. Whatever. Place physical money in each envelope and take from it daily as needed. When the money's gone that's it. You either stop spending or you continue spending but now with the realization that you have broken your budget, when and where it was broken, and the audit you do next month will show you just how much money was wasted as a result. With this simple strategy along and in depth yet quick and easy analysis of various investment principles and options complete with dollar amount figures of what you should expect if particular dollar amounts are invested now, Dave essentially gives you the map to financial independence.

Ps. When you do your audit whether it's the last 30 days or you do it in real time which Dave suggests, disciplining yourself to record every transaction as it occurs, you should prepare to be APPALLED as I was and as Ramsay says just about everyone is. What most chronically broke people realize as I did is that you're not ACTUALLY broke, you're simply pissing away hundreds of dollars a month on various vices and musings. Simply unaware, not caring enough about how you're spending your money. You already know this but the audit and budget will help you care more. You know when you pull into Mcdonalds and you're thinking "it's only six dollars" or ten dollars but that other voice is in your head like "6 dollars adds up".. After your audit you'll see you ACTUALLY spend about 175 dollars a month on fast food. Now when you're tempted to hit a fast food spot, you're thinking 175 a month, a grand plus over a six month period. You will care more, I found out I was spending around 350-400 on carry out and coffee a month. So yea, these are effective strategies.. I gave it 4 out if 5 cuz im a cynic. !! : ]>
Read more
155 people found this helpful
Helpful
Report abuse
See all reviews

AndyH
4.0 out of 5 stars Good book, but very US centric
Reviewed in the United Kingdom on May 14, 2019
Verified Purchase
I enjoyed this book - Dave Ramsey is a no-nonsense kind of person, who gives practical common sense advice, which you'll find heaps of in this book.

My only criticism is that it's very US-centric, and quite rightly too as that's where the majority of his target market are. It'd be interesting to see Ramsey apply his thinking to other English speaking countries to see what he'd recommend for some of the later baby-steps. Don't get me wrong - a lot of the content is applicable no matter where you are, but the discussion around Roth IRAs, 401(k)s and other US-specific content is easily skippable if you're not in the US.
Read more
12 people found this helpful
Report abuse

l girling
5.0 out of 5 stars I've done it
Reviewed in the United Kingdom on May 29, 2019
Verified Purchase
I read this book a few years ago and now I am debt free. It may take a while to sink in and change habits, but my advice is read this as young as possible to create real wealth.
Read more
12 people found this helpful
Report abuse

Keiran R.
5.0 out of 5 stars Love his method for financial control
Reviewed in the United Kingdom on October 16, 2018
Verified Purchase
My second book of Dave Ramsey. I read his other one the total money maker over, bought the book after months of watching his YouTube channel.
Read more
4 people found this helpful
Report abuse

Alexis McGhee
5.0 out of 5 stars A must read for us who need financial help
Reviewed in the United Kingdom on November 6, 2018
Verified Purchase
Very thought provoking. Great practical ideas. A bit wordy though.
Read more
2 people found this helpful
Report abuse

ps
4.0 out of 5 stars A Helpful Book
Reviewed in the United Kingdom on May 27, 2017
Verified Purchase
He's American, I'm English apart from that nothing is lost in translation and I find it useful and can understand it.
Read more
12 people found this helpful
Report abuse
See all reviews