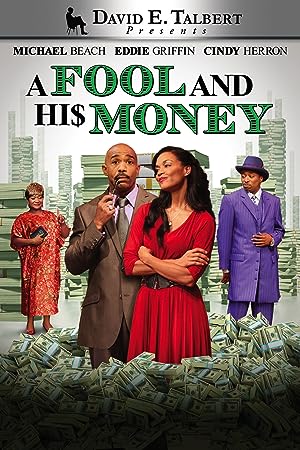 David E. Talbert's A Fool and His Money

DebbieReviewed in the United States on May 28, 2014
5.0 out of 5 stars
David E. Talbert's A Fool and His Money
Verified purchase
This was very nicely done. It was food for thought on just how we'd all act after coming into a large amount of money. $1 mil. is nice, but it's not a heck of a whole lot after taxes. HAHA.
The movie songs were good, the story line.........good, but not 100 percent realistic..........well, not in my home. HAHA. The ending was perfect. Eddie Griffith brought his cool suave acting to the fore in this.
2 people found this helpful
Report abuse

RCReviewed in the United States on May 30, 2021
4.0 out of 5 stars
Bubble gum .
Verified purchase
Very intertwining I seen better live plays .
Report abuse

uhhh, really??!?!?!Reviewed in the United States on May 20, 2020
5.0 out of 5 stars
Another BANGER!!!
Verified purchase
i just watched suddenly single and wanted more of DAVID E. Talbert!!! i came across this one, and i enjoyed it just the same!!!!
Report abuse

Rosalynn ClarkReviewed in the United States on February 6, 2013
5.0 out of 5 stars
Must See This Play!
Verified purchase
I love the play it shows the true side of people when they get money
I loved after years of strugging they finally had a break
but they used their blessing from God in the wrong way
and lost the money but in the end they became rich again
thanks to a long lost relative and God. It gives you hope
that if you do the right thing your money ship will come in
be patience!

T. ClaybrookReviewed in the United States on October 2, 2013
4.0 out of 5 stars
Unique cast
Verified purchase
Unique cast members. All very seasoned. Hadn't seen Cindy Herron in years from her EnVogue days. Of course she was first with Clarence Muse agency in LA before music.
Not as good had it been created for film, but they did a good job with stage. Talbert's is slightly comparable to Tyler Perry's.
2 people found this helpful
Report abuse

FlowerReviewed in the United States on December 26, 2012
5.0 out of 5 stars
fabulous, encouraging, miraculous and awesome!
Verified purchase
Great holiday play or any time play! We viewed this play over the holidays and enjoyed every moment of this! If you have Netflix you can view this on Netflix. We own a copy of this and all of David E Talbert's plays and a few of his books.

The play is so good and hits on reality! The play is on point and has very funny moments and moments that speak truth and reality!

David E Talbert's plays are always quality! You can always expect him to bring quality!

The characters were great and did a wonderful job. Eddie Griffin was so funny!

The story line is what is going on in today's world when fools come into money. There are so many lesson, to be learned from this movie. You will be inspired and you will want to watch this over and over!

You will laugh, and laugh! You will want to add this one to your collection!

Trina BurchettReviewed in the United States on June 18, 2012
4.0 out of 5 stars
Beware of Selfishness and Greed
Verified purchase
Husband (Michael Beach) and wife (Cindy Herron-Braggs, formerly of En Vogue) both work hard to provide for their family, yet they struggle to pay the bills. And the stress becomes worse when Mr. Jordan loses his job. But then there's a call from a radio station, and the Jordan family's financial situation is changed.

I saw the name Michael Beach (Third Watch, First Sunday, Ruby Bridges, Soul Food, ER) and decided to watch this play. I didn't realize Mishon Ratliff (R&B singer, dancer, actor) was cast as the teenage son; when he came onto the stage, I became even more interested. I remember Mishon from Lincoln Heights, a show that aired on ABC Family and, in my opinion, shouldn't have been cancelled. He is a talented young man and his presence is what made this play so entertaining for me.

After what Mrs. Jordan said to her husband because she was tired of having so little (I felt for Mr. Jordan at that moment), I thought she'd be more responsible when the money came. Actually, I thought they'd all have better sense than to make so many bad choices, and I kept wondering how they could be so wasteful, but the play is called `A Fool and His Money' - Jesus warned us to beware of selfishness and greed (Luke 12:15). Barely scraping by had affected Mr. and Mrs. Jordan's marriage and their son's education, but I guess they forgot all about that when dollars signs were all they could see. They needed to change their mindsets, and then they would have dealt with the million dollars wisely.

David E. Talbert shows how family members can allow money to tear them apart. He also shows how you never know who you're going to need: The family didn't like it when a long lost uncle (Eddie Griffin) showed up unexpectedly, but it turned out they were blessed to have him there. And he shows how some females will settle for less than they want in a man. There is also an important message of forgiveness in this well-acted stage play.

A Fool and His Money is a musical comedy-drama. I liked the singing, the humor (my favorite part is when Mr. Jordan had his son get out the Bible), and the ending.

*Do not copy/paste my review without permission. Thank you:)
7 people found this helpful
Report abuse
See all reviews
Back to top
Get to Know Us
Make Money with Us
Amazon Payment Products
Let Us Help You
EnglishChoose a language for shopping. United StatesChoose a country/region for shopping.
© 1996-2021, Amazon.com, Inc. or its affiliates