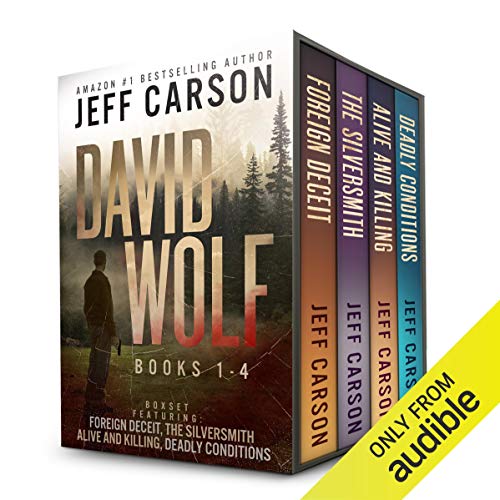 If you love mysteries with action, suspense and a touch of humor and romance, then the David Wolf series is for you.

Sergeant David Wolf of the Sluice County SD headquartered in the ski resort town of Rocky Points, Colorado, receives word that his brother has committed suicide in the Alps of Italy.

Deputy Sergeant David Wolf has been waiting sixteen years for today's opportunity to follow in the footsteps of his late father and become Sheriff of the Sluice County SD, headquartered in the small ski resort town of Rocky Points, Colorado. What he's offered, however, isn't quite what he's expecting. And for Wolf, refusing turns out to be harder, and much deadlier, than he could have anticipated.

Just for a day, Colorado Sheriff David Wolf trades slogging through murky meltwaters and even murkier small-town politics for an overnight camping trip in the wilderness with his son.

But when a man with fresh burns turns up on their trail, falling from the heavy load in his backpack and running wild from something, Wolf suspects his father-son camping trip may have just taken a turn for the worse.

The small town of Rocky Points, Colorado has just been hit with an epic snowstorm. When the snow removal process uncovers a dead body — a young woman brutally murdered and clearly marked with some sort of cryptic message — Sheriff David Wolf and his deputies are left scrambling to find a killer before he strikes again.

Special invitation from Audible!
Learn more about Membership
List Price: $29.95
You Save: $3.96 (13%)
By completing your purchase, you agree to Audible’s Conditions Of Use
Sold and delivered by Audible, an Amazon company
Share

4.5 out of 5 stars
4.5 out of 5
2,540 global ratings
How are ratings calculated?
To calculate the overall star rating and percentage breakdown by star, we don’t use a simple average. Instead, our system considers things like how recent a review is and if the reviewer bought the item on Amazon. It also analyzes reviews to verify trustworthiness.

H. Fox
3.0 out of 5 stars Not everyone wants sex and potty mouth in their reading material.
Reviewed in the United States on February 17, 2019
Verified Purchase
I liked the books.......I hated the potty mouth! It’s unnecessary and adds nothing to the book. Sex and foul mouths don’t sell the books. And I won’t be buying them again. Otherwise I’d have given 5 stars!
Read more
65 people found this helpful
Helpful
Report abuse

Mark h
5.0 out of 5 stars Careful-You’ll get addicted!
Reviewed in the United States on February 21, 2018
Verified Purchase
Jeff Carson really know how to keep you up at night turning pages. The characters are realistic, colorful and believable. Shortly into the book I could see each of them in my mind, could hear their voices, knew their personalities. A rare and under appreciated writer easily on par with Grisham and Patterson.
Read more
64 people found this helpful
Helpful
Report abuse

Joe Famulare
3.0 out of 5 stars Way to much filler
Reviewed in the United States on June 5, 2018
Verified Purchase
Way to much filler. Pages and pages of description's of scenery and furniture, etc. I don't care about things that do not pertain to the story. Just tell me the facts about what is happening.
Read more
56 people found this helpful
Helpful
Report abuse

Belinda Bright
5.0 out of 5 stars Begin at the Beginning - You'll Want to Read Them All
Reviewed in the United States on May 22, 2018
Verified Purchase
This 4-book series is absolutely the best way to begin reading Jeff Carson's fast paced David Wolf thrillers.

Foreign Deceit - David Wolf is devastated to learn his brother is dead, but it only gets worse when he arrives in Italy and discovers the death has been ruled a suicide. Not only does he believe his brother would never take his own life, the local police seem to be in a rush to close the case and send the American home with the body. Things heat up from there, and in true David Wolf fashion, it becomes a deadly rush to the end.

The Silversmith - David Wolf aspires to follow in the footsteps of his father and serve as sheriff of Sluice County Sheriff’s Department in Rocky Points, Colorado. However, rich and powerful people of the county have other ideas and Wolf soon finds himself accused of murder to keep him out of the race as well as being stalked by a hired killer.

Alive and Killing - Wolf and his son plan an overnight trip of fishing and camping at a lake in the mountains. However, they meet an extremely nervous man coming down the trail that leaves them questioning what he could be carrying in his overly heavy backpack. Not long after Wolf and Jack reach their destination and get their camp set up, they are ambushed by a man who seems intent on killing them. Add a female FBI agent (who also might be a love interest) and the action and mystery just heat up from there. It’s a great race to the end

Deadly Conditions- When a woman’s dead body is turned up by a snowplow, a red X drawn on her forehead with lipstick sends the whole town into a panic. Wolf and his team go in search of a murderer in their midst. As with all the other books in this series, once the action begins, it’s definitely a page turner to the end.
Read more
50 people found this helpful
Helpful
Report abuse

Henry Way
5.0 out of 5 stars Must read.
Reviewed in the United States on October 19, 2017
Verified Purchase
Excellent. If you're looking for a Jack Reacher style fix, this is it. Sheriff David Wolf is tough, flawed and believable. The stories flow Seamlessly, hard to put down. What a great value. Can't wait to read more.
Read more
43 people found this helpful
Helpful
Report abuse

Angeltobe
5.0 out of 5 stars Excellent Western Murder Mystery at Ski Resort
Reviewed in the United States on September 7, 2017
Verified Purchase
Colorado Ski Resorts small town politics and a sprinkling of murder when one needs to be silenced. Either to hide an affair or a shady slice of corruption. This set of books can't be put down. I read the first and had to buy the whole box set! The town sheriff is doing his best to keep his job, family his department and town together. He has an off and on ex wife and a growing son. He is trying to live up to his fathers legacy as a sheriff. He finds that murder and small town politics are everywhere. The characters and story line is wonderful. The story flows smoothly from one book to The next. You won't be able to read just one. They are addictive! Excellent story!!!!! I'd give more than five stars if possible.
Read more
41 people found this helpful
Helpful
Report abuse

Glennie
5.0 out of 5 stars Adore this series.
Reviewed in the United States on August 15, 2018
Verified Purchase
I guess the greatest complement you can give an author is to continue to buy his books. After reading the first 4 David Wolf mysteries, I immediately bought numbers 5, 6 & 7 in the series & I will continue to buy & read them in sequence until there are no more. I was immediately taken with the characters in this series & it does remind me of the Joe Pickett series which I also love. I have read 6 of this series now & will soon be reading the 7th. The characters are well drawn & you feel like your involved in their lives. I am extremely satisfied with this find.
Read more
21 people found this helpful
Helpful
Report abuse

sjbrn1Top Contributor: Guitars
3.0 out of 5 stars It’s ok
Reviewed in the United States on December 27, 2017
Verified Purchase
Good series, not great to me, but ok. I will continue on with the series, because i need to read! I like a good series of books to follow, like the Jack Reacher series. These are not that good, but ok. Sometimes the character over reaches for my taste.
Read more
30 people found this helpful
Helpful
Report abuse
See all reviews

Jan B
4.0 out of 5 stars Wolf is a complex character maybe his war experience has made him so...
Reviewed in the United Kingdom on November 30, 2019
Verified Purchase
I enjoyed the books, so much I have bought the next 4....But I did not get a good feel for 'Wolf' he seems very apart from his team but I'm hoping he will become a more likeable character... But a good story line in all of them, especially the first book..
Read more
2 people found this helpful
Report abuse

Kindle Customer
1.0 out of 5 stars Rubbish
Reviewed in the United Kingdom on October 11, 2019
Verified Purchase
Nothing like the reviews given from other people
Read more
One person found this helpful
Report abuse

barry mead
5.0 out of 5 stars The David Wolf Mystery Thriller Series
Reviewed in Spain on September 5, 2017
Verified Purchase
A new author to me and I bought the first four book set and glad I did. The first book was a decent read but I found the books on his home ground better as they enabled him to expand the character and other characters better. I don't know if the first book was the first one Jeff had written, but it came across that way and it took a little while to get into David Wolf's character. But it was as said a decent enough read so don't let my remarks deter you from reading it, but then try the second book.
So far I have read the first 8 in the series and I would say it is important to read in order as a lot of the background characters interweave as the series progresses hence my comments about the first book
It's a nice blend of action, police work, personal life and drama with Colorado as a great backstage
It's certainly more than simply another police detective book and I look forward to reading the rest of the series, probably one of the most enjoyable new books I've read in the last couple of years
Read more
Report abuse
Translate review to English

Lori H
5.0 out of 5 stars Easy read with great characters
Reviewed in Canada on August 10, 2017
Verified Purchase
These four books are a great read and exactly what I was looking for while on vacation. The main characters are likable and interesting. The plots are easy to follow which makes them enjoyable if you want a relaxing read. These books are written in a way that you either know "who did it", or can easily figure it out, but the story has just enough unknowns to keep you interested. I'll definitely purchase the rest of the series.
Read more
One person found this helpful
Report abuse

David Jenkins
4.0 out of 5 stars Whatever
Reviewed in Australia on May 27, 2021
Verified Purchase
A good yarn quite predictable but worth reading least it gets to see some of the country around Aspen in America sitting on in Australia and we have nothing but heat and a tidy bit of cold
Read more
Report abuse
See all reviews
Back to top
Get to Know Us
Make Money with Us
Amazon Payment Products
Let Us Help You
EnglishChoose a language for shopping. United StatesChoose a country/region for shopping.
© 1996-2021, Amazon.com, Inc. or its affiliates