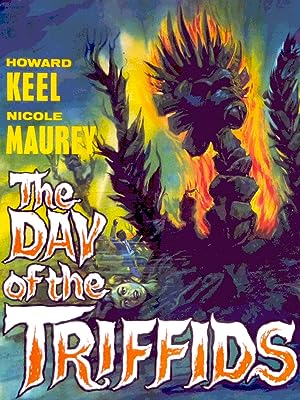 The Day of the Triffids

(538)6.11 h 34 min196213+
Based on the popular novel of the same name by John Wyndham, Triffids are tall, carnivorous, mobile plants capable of aggressive and seemingly intelligent behaviour. They are able to move about by "walking" on their roots, appear to communicate with each other, and possess a deadly whip-like poisonous sting that enables them to kill their victims and feed on their rotting carcasses.

PLCReviewed in the United States on February 25, 2019
1.0 out of 5 stars
Lousy Amazon Print
Verified purchase
Another film that probably could be fun to watch on a lazy afternoon or popcorn munching evening, but as happens too often, the print is choppy and almost unwatchable. There's simply no excuse for this lousy lack of quality. I've seen so many films, or attempted to, on Amazon Prime Video that I KNOW are out there in almost pristine condition from having watched them on TCM, on AMC, on everything but COMET channel. Free shouldn't mean junk.
28 people found this helpful

Raisuli the MagnificentReviewed in the United States on December 12, 2018
4.0 out of 5 stars
More good story material.
Verified purchase
The film is some what dated in terms of production values, but truly the only thing I think that's holding back a better film are the Triffids themselves. The set up for their invasion and encroachment on a crippled global society is pretty intriguing and scary, but the Triffids themselves, like George Lucas commented on scifi monsters in general, aren't "monster enough" to really sell the danger that they present. How you would go about doing that is beyond me, but I imagine it would involve a re-imagining of the botanical menace themselves; i.e. make them more carnivorous, more dynamic, and more frightening as a whole, ergo more plausible in some way.

But, if you can get by that, then this film should entertain. There's one or two hokey moments (the Triffids not withstanding), but the film does try to take a realistic look at a world wide disaster and how mankind of all walks of life would cope. That, and there's a kind of H.G. Wells solution in the end that works both in terms of story and in a scientifically based as well as fictional sort of way.

The acting is actually pretty decent, though there aren't a great number of overly dramatic parts, but the actors really do give it their all with the material they have to work with.

The film is marginally static here and there. I think, as I've stated, as menacing as the Triffids are, they needed to be ratcheded up a notch or two in the frightening-monster department. That, and the current Amazon stream is somewhat low definition and kind of soft, but otherwise an okay presentation.

I think this is one of the good classic scifi films from the 60s that I caught on occasion on weekend afternoons when I was younger. Give it a shot.

Avid ReaderReviewed in the United States on April 20, 2020
3.0 out of 5 stars
oh my, this is bad stuff.
Verified purchase
First: the quality of the download is poor. If you don't get this free from Amazon Prime, I don't recommend buying or renting it unless by way of hard copy.

Second: The poor quality does not hide the poor production and acting. It's really a stinker. And the music score? OMG. lolololol. And the screaming. ugh. I've heard women wail due to loss, etc. but I've NEVER heard screaming like this. And one of the cast screams a lot. But if bad old sci fi movies make you laugh, or you find them entertaining for other reasons, then this would definitely fit the bill.

So Why 3 stars? It gets 2-2.5 stars because I did laugh. And more than just once or twice. Plus one scene has a bunch of escaped convicts making women dance on tables. Omg Omg Omg. The scene is laughable but in it you'll briefly see one woman who really gets into her acting. I watched that part several times to try and decide if it was a female prisoner who was enjoying herself (If so it's some of the best acting in the movie) or an extra playing a blind woman while also auditioning for a part as an exotic dancer. Idk. But anytime I find myself "rewinding" a movie to try and figure something out, that deserves an extra 1/2 a star or so just because.

To sum up, don't watch unless you really have no other alternative or you really like watching bad movies.
6 people found this helpful

Conrad ToutgesReviewed in the United States on July 29, 2018
4.0 out of 5 stars
Great movie; less than perfect print.
Verified purchase
I liked it enough to have watched it several times. It's a good adventure although some of the lighthouse scenes were a little tedious. The story moves right along, and has some original ideas, and the acting was good. It's not a great print, but it's at least as good as any others I've seen, and it's entirely watchable. The only objection I have is with the Amazon "general trivia". Much of the trivia relates to the book, not the movie, but they don't make that very clear. Also, much of the trivia is poorly written.
8 people found this helpful

Avid readerReviewed in the United States on March 4, 2019
4.0 out of 5 stars
Daleks with foilage
Verified purchase
This is an old movie, but fun. The print is not particularly crisp, and if you use subtitles, they are a total mess. The special effects are what one would expect from the late 1950's, when this movie would be in production. There are two main focal points in the movie. The sailor who comes across a young girl who can also see, and how they try and get to a place where they can get help, when almost everyone around them are blind. And the couple in the lighthouse on the island who are trying to ward off the attack of the triffids. So without million dollar special effects, they have to use the script to fill out the story, which makes this classic fun to watch.
4 people found this helpful

Roberto GonzalezReviewed in the United States on March 10, 2019
4.0 out of 5 stars
Hilarious!
Verified purchase
This movie is so bad, it's good. The fun of watching it is laughing at its many shortcomings. How do I loathe you, let me count the ways ... The cast consists of graduates from the Silent Film School of Overacting. The editing is random. The music is strident. The music editing is incongruent. The direction is by Captain Obvious. The novel is by John Wyndham, but the script is by Orville Redenbacher. The plot is full of holes so large whole armies of triffids could march through them. In the spirit of the times, England, France and what is supposed to be Spain but looks suspiciously like Mexico are helpless, but the good old USA saves the day left and right. There were times I had to stop the video lest my own laughter make me miss some jewel. By all means, order a couple of large pizzas and call your friends. Make an evening of it. Never mind the Raspberry Awards. Someone should create a new award ceremony for movies so awful they make you cramp with laughter: The Triffids!
4 people found this helpful

Tuatha DedanannReviewed in the United States on October 11, 2018
5.0 out of 5 stars
don't believe these bad hypes
Verified purchase
so, it's not as crisp as a rap video, the visuals are just fine, no reason for the movie to look like anything other than what it is, A FILM FROM 1961; it Is a rather well produced sci-fi horror one from Britain at that; to tell the truth, I am not even done watching this, for this is the first time I am being treated to this film that I've read and heard a lot of for years-loving it; I was getting perplexed as to why it received so many cry-baby reviews as to its quality and finally irked, so I X'd it out to come down here, release this from my mind and maybe let someone that's open mindedly reading these and wondering if they should take the plunge - YES; also, a plane just crashed into a harbor in the film and it made me wonder if perhaps this is what happened when the World Trade Center towers got hit on 9/11 and we were all duped by way of govt. cover up*; bye, time to get back to it....PROJETIONIST!

danielnewhouseReviewed in the United States on November 2, 2018
4.0 out of 5 stars
Dead Kudzu walking
Verified purchase
They run up the lighthouse and then have the brilliant idea of using saltwater to destroy them.

In the beginning, one of the triffids puts its tentacles on a man's eyes to seemingly cleanse them. Not all triffid effects on the human body are benign.

This is a remake, the earlier version deals more with the dust bowl and a parallel with the book of Revelations. It's more poignant. This is more like, woah kill kudzu with saltwater, I have an idea for science fair!
One person found this helpful
See all reviews
Back to top
Get to Know Us
Make Money with Us
Amazon Payment Products
Let Us Help You
EnglishChoose a language for shopping. United StatesChoose a country/region for shopping.
© 1996-2021, Amazon.com, Inc. or its affiliates