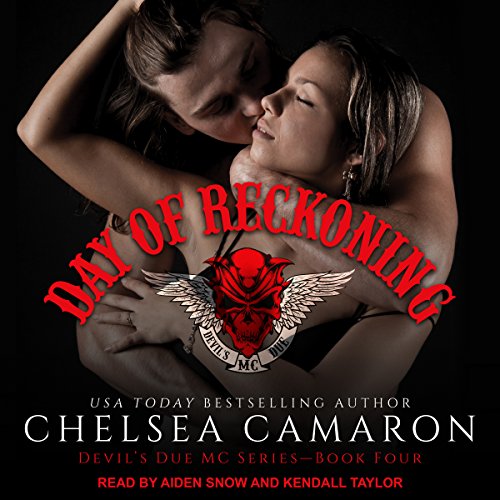 Jackson "Rowdy" Presley did a dime, and he served his time silently. He could have brought down the real criminals, but instead he took the term and paid the price. Never having loyalty before the Devil's Due MC, he finally has the new beginning he desperately needs.

She's not afraid to call herself a sinner.

Peony Michele Forbes lives her life wherever the wind takes her. She walked away from her past to give herself a future with no restrictions. As much as she wants to forget who she is, others don't want to let her disappear so easily.

However, danger follows her everywhere she goes.

Will Jackson see beyond his jaded connection to Peony and find there is more to life than revenge? When backed to the wall, will Peony let herself trust Jackson to be the one to save her?

Love, hate, anger, and passion collide as the time comes, and the devil demands his due.

Special invitation from Audible!
Learn more about Membership
List Price: $23.09
You Save: $3.14 (14%)
By completing your purchase, you agree to Audible’s Conditions Of Use
Sold and delivered by Audible, an Amazon company
Share

4.5 out of 5 stars
4.5 out of 5
65 global ratings
How are ratings calculated?
To calculate the overall star rating and percentage breakdown by star, we don’t use a simple average. Instead, our system considers things like how recent a review is and if the reviewer bought the item on Amazon. It also analyzes reviews to verify trustworthiness.
Top reviews

micharch
VINE VOICE
4.0 out of 5 stars Quite a few interesting plot twists that kept me reading.
Reviewed in the United States on August 27, 2017
Verified Purchase
Rowdy and Michele have a difficult past. High school sweethearts who married and then had their lives turned upside down are about as far apart as can be at the start of this book. Rowdy believes Michele is dead and is wandering aimlessly with the Devil's Due MC. He owes Judge his exoneration after being cleared of killing Michele's brother. Michele was kind of whiny and not very good at taking care of any of the situations she found herself in. She allowed the men in her life to protect her and didn't bother to see what was going on around her. She was easily manipulated and, years later, finds herself in even more trouble than before. Rowdy gets word that she is still alive and in trouble and immediately seeks to find her and get her out of trouble. The Devil's Due MC help and they find that the drug cartel she works for is not an easy enemy to get rid of. Michele doesn't know which end is up again and it got old for me. When the truth is revealed to Michele she is left wondering how she could have gotten things so wrong. I did like how Rowdy stepped up and did what he felt needed to be done. Michele did have to come to grips with a new reality pretty fast and did well with the changes. I liked how Rowdy was willing to put it all on the line for her. A nice addition to this series.
Read more
One person found this helpful
Helpful
Report abuse

Tpagirl Loves Romance
4.0 out of 5 stars A captivating mixture of dark and sweet!
Reviewed in the United States on March 14, 2018
Verified Purchase
Day of Reckoning was the fourth book in the Devil’s Due MC series by Chelsea Camaron. I accidentally read this one and the next one out of order, but each can be read as a standalone without missing anything.

The Devil's Due MC was created by a small group of men with troubled pasts that were looking to right wrongs that hadn’t been resolved through normal legal channels. They were nomads staying no one place for long but roam where the next lead took them.

Jackson Joseph Presley aka Rowdy served time for a crime he didn’t commit, the murder of his brother-in-law. He was exonerated after he served but not before losing his wife.

Michelle Forbes married her childhood sweetheart at eighteen. In a troubled upbringing, Jackson was her light and her love...until he was convicted of murder. She faked her death and disappeared while he was in jail.

Day of Reckoning was a dark theme centering around a drug cartel and the debt owed to them. But amidst the dark, there was a sweetness lurking through the second chance love between Rowdy and Michelle.

It was told with a dual POV and was a quick and entertaining read. True to form for the series, our favorite Nomads and their women were front and center in the storyline, providing additional depth and “feels” to the plot. I loved the family bonds between the group and can never get enough.

Next in the series is Paid in Full, Deacon’s story, which I’ve already read (4 Stars), so I finally get the last Nomad, Trapper, in Bottom Line. Trapper is one crazy dude so I can’t wait to see where Camaron leads us.
Read more
Helpful
Report abuse

Deb
5.0 out of 5 stars Jackson & Michele
Reviewed in the United States on January 14, 2021
Verified Purchase
I loved Rowdy and Michele's story!!! With everything he has dealt with and believed and remain calm and forgiving he truly is an amazing man. He truly loves Michele with all his heart and would do anything for her. It was just a beautiful story and with all that beauty does come some darkness. This book had the perfect amount of everything and I can't can't wait to read Deacon and Trapper's story.
Read more
Helpful
Report abuse

Kid
3.0 out of 5 stars Good but not the best of the books
Reviewed in the United States on September 13, 2017
Verified Purchase
It wasn't my favorite of the books but it's still likable. It wasn't particularly memorable for me either. I had difficulty liking the h in the book. Rowdy came off a lot better to me. Kind of stubborn. Pretty strong. Like you'd see him as that tree still standing after a storm I think. Because they had a relationship prior to this book it was easier to accept their love story happening at the speed it happened I think.
Read more
One person found this helpful
Helpful
Report abuse

A.Fernandez
4.0 out of 5 stars Jackson and Michelle
Reviewed in the United States on July 17, 2020
Verified Purchase
This story was a little frustrating, I couldn’t see how Michelle did not have more faith in Jackson. Then she gets herself tangled in a mess. Jackson is way too forgiving. That being said, I did enjoy going in another ride with the Devil’s Due MC.
Read more
Helpful
Report abuse

Amazon Customer
2.0 out of 5 stars Anticlimactic
Reviewed in the United States on January 14, 2018
Verified Purchase
The one word to describe this book would be anticlimactic. We took a ride through a small town. I blinked and it was gone. That is how fast this book traveled. No build up. Just over.
Read more
Helpful
Report abuse

Kindle Customer
5.0 out of 5 stars Loving it even more!
Reviewed in the United States on July 5, 2019
Verified Purchase
I swear each story just gets better and better! Rowdy and his love for Michele and his family made this story completely perfect!
Read more
Helpful
Report abuse
See all reviews

Lizzie
3.0 out of 5 stars Short and expensive
Reviewed in the United Kingdom on August 31, 2017
Verified Purchase
This finished at 73% this means for me it's too short. It's a shame as I tend to buy this authors books as she's a good writer.
Its well-written and edited but because there's not enough of it means it's underdeveloped.
I liked the characters, Rowdy and Peony. The storyline had lots of potential. I just wish there's was more- hence the 3 stars.
Read more
Report abuse

Kindle Customer
4.0 out of 5 stars Hurt and sadness
Reviewed in the United Kingdom on October 14, 2017
Verified Purchase
Rowdy is suffering. He still misses his dead wife, she died when he was in prison for a crime he did not commit. Fast forward a few years and a face from his past appears.
Read more
Report abuse

nan8
5.0 out of 5 stars Five Stars
Reviewed in Australia on March 9, 2018
Verified Purchase
10/10
Read more
Report abuse
See all reviews
Back to top
Get to Know Us
Make Money with Us
Amazon Payment Products
Let Us Help You
EnglishChoose a language for shopping. United StatesChoose a country/region for shopping.
© 1996-2021, Amazon.com, Inc. or its affiliates