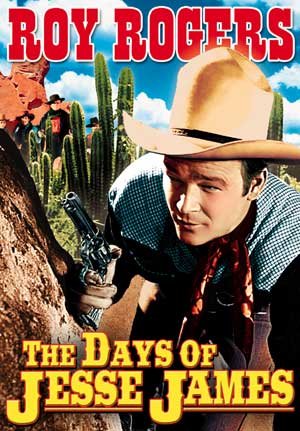 Mr. John RhodesReviewed in the United States on August 27, 2014
4.0 out of 5 stars
Four Stars
Verified purchase
Quite Fair

William L. NewmanReviewed in the United States on December 16, 2007
1.0 out of 5 stars
Good to see Dale and Roy, but........
Verified purchase
This movie is a little misleading. The run time is listed as 63 minutes. And 63 minutes is the original version run time.
However the actual run time of the movie is 51 minutes. There is a pre and post movie interview with Dale, Roy, and Dusty which makes up the rest of the run time. Now seeing them is worth the money I paid for the movie, but I was after a full length film.
I have been told that all the Happy Trails have the edited versions of Roy's movies. I'm not sure this is true...I've only bought this one.

JKLReviewed in the United States on June 8, 2015
2.0 out of 5 stars
Not even a good old western ...
Verified purchase
Typical of first Roy Rogers' movies. I quit watching it; not interested in it.

EinsatzReviewed in the United States on January 12, 2020
5.0 out of 5 stars
“I ain’t excited, I’m mad!”
A whole lot of robbery takes place in this movie, starting with a train robbery then moving onto a bank robbery. Naturally, the local robber Jesse James is blamed for everything, this is what comes of having a bad reputation. Roy Rogers show up, eventually, to take charge of the matter. He pretends to be an outlaw and with Gabby as his sidekick they try to find the whereabouts of the money stolen in a recent bank robbery. Gabby has a vested interest in this robbery as a lot of the money stolen was his. Call it a conflict of interest. Of course Roy sings, sings and plays the organ as well, how versatile. He can’t let the day end without a tune of some sort.

J. LovinsReviewed in the United States on September 28, 2007
4.0 out of 5 stars
"Roy Rogers B-Western Series ... Days of Jesse James (1939) ... Republic Pictures "
Republic Pictures present "DAYS OF JESSE JAMES" (20 December 1939) (63 mins/B&W) (Fully Restored/Dolby Digitally Remastered) --- Roy Rogers (born Leonard Slye) moved to California in 1930, aged 18 --- played in such musical groups as The Hollywood Hillbillies, Rocky Mountaineers, Texas Outlaws and his own group, the International Cowboys --- In 1934 he formed a group with Bob Nolan and Tim Spencer called "Sons of the Pioneers" --- While in that group he was known as Leonard Slye, then Dick Weston and finally Roy Rogers --- Their songs included "Cool Water" and "Tumbling Tumbleweeds" --- They first appeared in the western "Rhythm on the Range" (1936), starring Bing Crosby --- In 1937 Roy went solo and made his first starring film in 1938, "Under Western Stars" (1938) --- He made almost 100 films --- then came television, "The Roy Rogers Show" (1951) ran on CBS from October 1951 through September 1964.

Hats off and thanks to Les Adams (collector/guideslines for character identification), Chuck Anderson (Webmaster: The Old Corral/B-Westerns.Com), Boyd Magers (Western Clippings), Bobby J. Copeland (author of "Trail Talk"), Rhonda Lemons (Empire Publishing Inc), Bob Nareau (author of "The Real Bob Steele") and Trevor Scott (Down Under DVD Com) as they have rekindled my interest once again for Film Noir, B-Westerns and Serials --- looking forward to more high quality releases from the vintage serial era of the '20s, '30s & '40s and B-Westerns ... order your copy now from Amazon where there are plenty of copies available on DVD --- stay tuned once again for top notch action mixed with musical adventure --- if you enjoyed this title, why not check out Amazon where they are experts in releasing B-Westerns --- all my heroes have been cowboys!

JeanReviewed in the United States on November 2, 2003
2.0 out of 5 stars
Interesting as a cultural history of the 1930's
A Great Depression morality tale, wherein the outlaws are really good boys who love their mother, and the capitalists and banker are really black-hearted crooks who prey on the innocent. I'd give it one star for its sheer tedium but a very youthful Roy and Trigger look terrific and who doesn't like Gabby Hayes? As usual in these old oaters, the horseriding is spectacular. Roy has one love song, while playing the pump organ. The movie inspired me to look up the history of the James gang to find out what they were actually like.
One person found this helpful
See all reviews
Back to top
Get to Know Us
Make Money with Us
Amazon Payment Products
Let Us Help You
EnglishChoose a language for shopping. United StatesChoose a country/region for shopping.
© 1996-2021, Amazon.com, Inc. or its affiliates