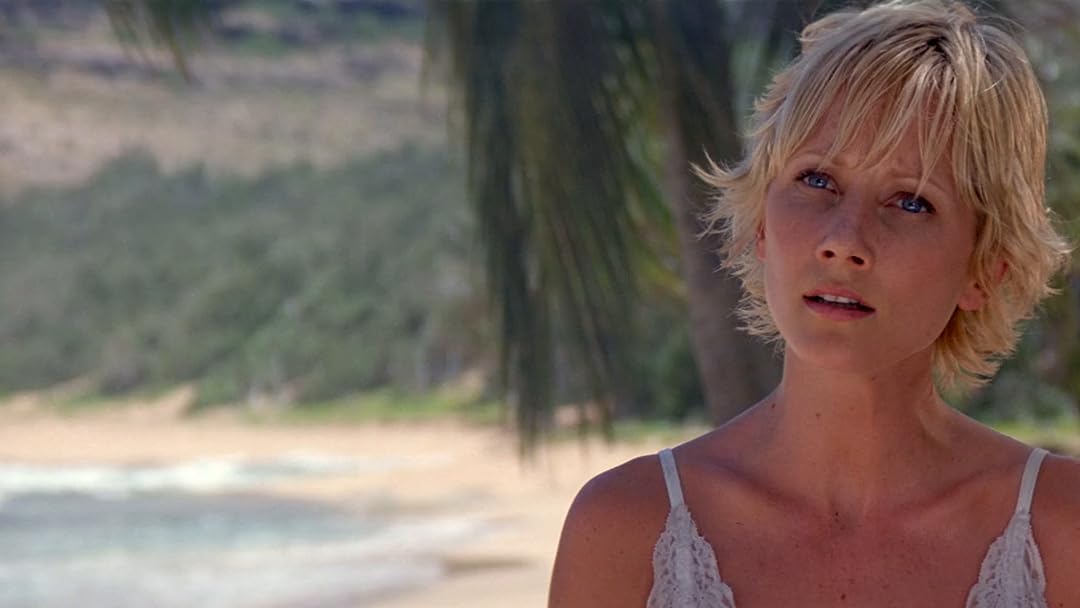 Daniel C. CunninghamReviewed in the United States on February 24, 2019
4.0 out of 5 stars
A fun movie with features recycled from Star Wars
Verified purchase
I liked Ann Heche. Even though her ".... ass is too narrow and your tits are too small" according to Harrison,
her sweet face and charming, feminine gestures and her courage and competence under fire win my heart.
I liked Harrison Ford with his ever-cool, confident demeanor in the face of misfortune. This was intended to be a simple, entertaining film without forcing the watcher to engage his critical thinking. Thus they used the same scene that Ford had acted in Star Wars only this time with his old airplane rather than a re-conditioned beyond-light-speed space ship. In fact he could have conceivably been the pilot Quinn in 1997 and - in an future incarnation - Hans Solo flying the Millenium Falcon, though the movie-makers created the Stars Wars epic 20 years before the "Six days" movie.
Among the trivia it was pointed out that they left a bar on top of the plane in one scene and not the next scene and Ann started the climb the mountain wearing a clean white dress and continued in shorts and a t-shirt thing and then was again in her dress which she changed on camera back at the wrecked plane. But these trivial things did not take away from one's enjoyment of the movie if one does not think too much.
I found it silly that they crashed onto this island - deserted, uninhabited, not on Ford's chart, somewhere near Tahiti that had not only water and a mountain to cause weather and rainfall and flowing potable water and bird life and insect life, but a handy wrecked Japanese warplane (though the Japanese did not go to Tahiti during their WWII offensive) from which they were able to salvage light-weight pontoons to float their wrecked plane off the island, held on by strips of bamboo - when the fact is there are no uninhabited, habitable islands anywhere anymore and no uncharted islands in the Pacific - the British navy charted every piece of dirt and coral over 200 years ago.
But, hell suspend critical thinking and enjoy the fun movie.
As Heche said of Ford he was living every man's dream but it was only for men under the age of 12.
And me too. And I am almost as old as Ford and I still dream of such a paradise.
So I was happy with the ending even though Ford is twice as old as Heche their characters were able to grab a chance at some happiness in a thatched-roof shack.
Hey, we only live once, right? So take what happiness you can.

D. RobertsReviewed in the United States on March 15, 2020
5.0 out of 5 stars
Trapped on an island with Anne Heche? Worse things could happen!!
Verified purchase
If you are looking for a cross between a Romantic Comedy & an adventure movie in the tradition of ROMANCING THE STONE then this movie is likely for you. A tourist (Anne Heche) and pilot (Harrison Ford) fly into a storm & have to crash land on an uninhabited island in the south Pacific. The radio is out & nobody knows where they are.

What follows is an entertaining film about 2 people who don't think they like each other.....until they find out that they do. They have several misadventures on the island that put them in awkward situations. Oh, and the island is absolutely gorgeous in spite of being isolated.

For me the 1 downside of the DVD is that it is one of those 1990-esque movies that shows as a rectangle in lieu of using up the entire screen. I feel like I'm watching the movie thru a keyhole.

Outside of that it's a very fun movie. Anne Heche is beautiful although I don't care for her Tomboyish short haircut. Much more importantly, Anne & Harrison have a good chemistry together & play their parts well. All in all, a movie that will delight both fans of Romantic comedies & fans of adventure movies alike!
9 people found this helpful

Angela HessonReviewed in the United States on May 17, 2019
5.0 out of 5 stars
Fun movie!
Verified purchase
I used to be an English professor. I taught technical writing, American literature...and FILM STUDIES. I'm not going to claim that this is the greatest film ever made, but it sure is fun. My rating: 3 and 3/4 out of 4 bags of popcorn. If you want the more traditional rating, that's 3 and 3/4 out of 4 stars. Harrison Ford is so sexy in this film, and Anne Heche is quite funny. These kids have chemistry.
9 people found this helpful

Carla H.Reviewed in the United States on March 27, 2019
2.0 out of 5 stars
Old fashioned wide screen with tops of their heads not visible
Verified purchase
Great movie! Really really wide screen which I’m not happy about. I couldn’t stretch it and no full screen option. I watch my movies wide screen but not like this dvd. Movie was across the middle of the screen of my smart tv and in some scenes the tops of the actors heads were not visible. Disappointing cuz I was so excited to get it. I enjoyed the movie but was irritated. So the two stars are for the movie itself
9 people found this helpful

T. VeitchReviewed in the United States on September 29, 2016
5.0 out of 5 stars
A film classic in the grand tradition.
Verified purchase
A film classic in the grand romantic comedy tradition. I don't get why Rotten Tomatoes only gives it a 36%. We watch it every couple years and enjoy every minute of it every time. The movie is really about the interactive chemistry, dry wit and spot-on timing of the actors -- more so than the story itself (which is a sturdy construct based on classic themes.) The pirates are good too, because they seem so real -- violent criminals like these could easily roam the high seas preying on rich people in their yachts. (When I buy my yacht, it is going to come fully loaded with turret guns! :-)
12 people found this helpful

SandyReviewed in the United States on June 13, 2015
5.0 out of 5 stars
As exciting, fun, and action packed as Jewel of The Nile!!!!!!
Verified purchase
I am a fan of Harrison Ford since Star Wars, Witness, and Indiana Jones series. I had not seen him in any romantic comedy because I did not care for the actress in the remake of Sabrina years ago. I was able to watch the movie on cable first and discovered that this movie had action, suspense, comedy, and romance. There is chemistry between Anne Heche's and Harrison Ford's characters. I enjoyed the movie so much that I decided to purchase it for my extensive DVD library. I stopped purchasing DVDs for years now because there have not been any movies which I care to watch a second time. The movie has a slow pace initially, then, definitely picks up and captures your full attention. This movie reminds me of The Jewel of The Nile starring Michael Douglas and Kathleen Turner. I loved Jewel of The Nile!!!!!! This movie is as exciting, entertaining, fun, and action-packed as Jewel.
16 people found this helpful

Lamont WeideReviewed in the United States on July 20, 2021
5.0 out of 5 stars
Best Movie
Verified purchase
Has something for everyone. Action, comedy, romance. When ever we are a little bit down we play this movie and attitudes improve. My children can quote the movie. There are some great lines in it. "I still am good". I do wish it took up more of the screen, it has high black borders above and below, my VHS version does not, but harder to keep a VHS player running or even replace anymore so we wanted the DVD version. Highly recommend this movie. Action for men, Harrison Ford for the women, comedy. Again one of our favorite movies and something for everyone. Not a Harrison Ford movie that everyone has heard about and that is too bad. Watch it and enjoy.

Theresa PinesReviewed in the United States on August 12, 2020
5.0 out of 5 stars
FUN
Verified purchase
This is one of my favorite films of all time. If you're looking for something light with fun and adventure, great scenery, this is the movie for you. I love it when the writer throws in some humor along with the danger too. I thoroughly enjoyed it. During these times we could all use a little distraction and this movie will do the trick.
One person found this helpful
See all reviews
Back to top
Get to Know Us
Make Money with Us
Amazon Payment Products
Let Us Help You
EnglishChoose a language for shopping. United StatesChoose a country/region for shopping.
© 1996-2021, Amazon.com, Inc. or its affiliates