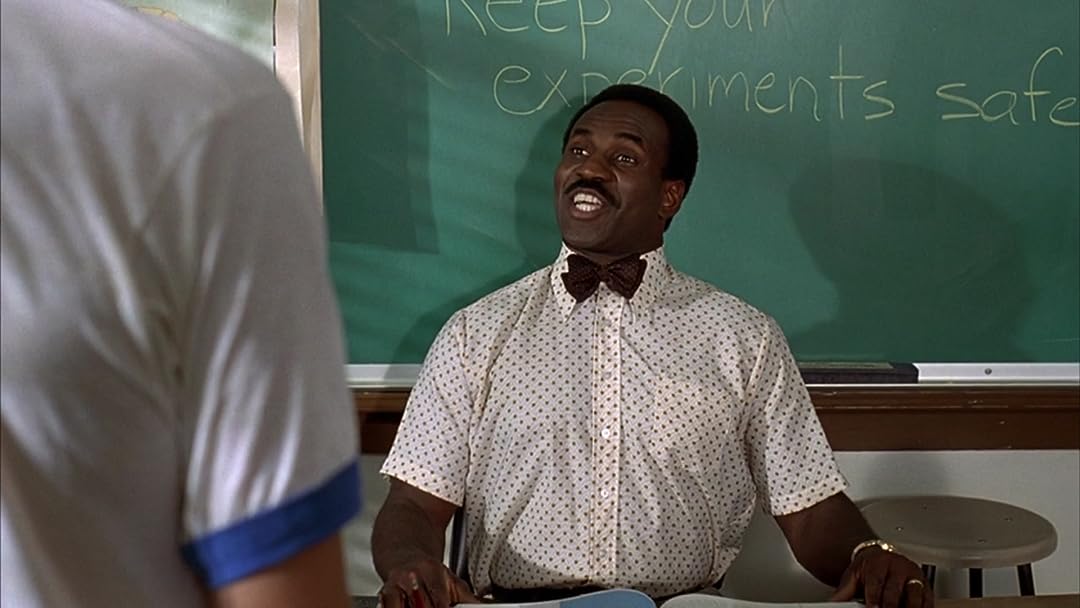 The All-Seeing IReviewed in the United States on February 22, 2020
5.0 out of 5 stars
The 1970s As They Pretty Much Were
Verified purchase
With uncanny precision, “Dazed and Confused” conjures the gut feel of ‘70s high school culture and encases it in a spot-on selection of era-specific songs that arrive with magical timing. This is a film that somehow grows more deeply felt the further we get from its depicted era.

It's the last day of high school, 1976. Outbound seniors torment freshmen, but where they’ll party that night is TBD. It’s a universally-felt plot that gives rise to elite character sketches: Randy “Pink” Floyd (Jason London) is at a football-driven crossroads. Mitch Kramer (Wiley Wiggins) is a freshman with a bull’s-eye on his back. Wooderson (Matthew McConaughey) is long-graduated, but loves those high school gals. And Slater (Rory Cochrane) is our timeless philosopher-stoner.

It turns out the '70s were cool, we just maybe didn’t grasp how cool as it all happened. “Dazed and Confused” evokes the era's endearing and enduring purity like few have. – (Was this review of use to you? If so, let me know by clicking "Helpful." Cheers!)
-
WATCHED IT? THEN WATCHLIST: [[ASIN:B009NXV51S "Almost Famous,"]] [[ASIN:B003MXB4FC "Napoleon Dynamite,"]] [[ASIN:B07JVSYPZ7 "Stadium Anthems."]]

Dr. SReviewed in the United States on December 22, 2019
1.0 out of 5 stars
Were the '70s this bad?
Verified purchase
Older kids being mean to younger kids. No smart kids in the bunch. No one doing anything creative or iconoclastic. Wow, was it really this awful? We did have bullying in the '80s, but not to this level. A nasty cycle of kids being bullied and humiliated when they were young and then getting older and turning around and bullying and humiliating the next kids in line... When the film was not appalling, it was boring.
27 people found this helpful

PyrielReviewed in the United States on August 28, 2020
5.0 out of 5 stars
You cool man?
Verified purchase
Alright, alright, alright, what can I say but this movie is platinum. This movie has so much fun that it spanks hard some all time favorable memorable quotes deep into your mind for the remainder of your lifetime. If you have not had the joy to watch this, what are you waiting for??? Open a cold one, relax, and enjoy the pleasurable ride. Check you later!
20 people found this helpful

One of the talking-points of this film is the seamless use of the variety of characters and scenes used in this film. In total there's about 16 main characters that the movie "follows", and while there are cliches (like one would expect at a High School) the characters all have a unique flair that makes them stand out at just the right moments. In addition to this, the characters' have stories that are all woven together (I mean, they all do go to the same high school) in ways that seem natural and don't feel forced or out-of-touch with reality.

It's not very often that i bring up the music in this review, but the free spirited tone of this movie is elevated by the soundtrack; It embraces the mood of the 70s (the setting of the film) and includes hits like 'School's Out", "Rock and Roll All Nite", and "Slow Ride". Some people may consider these tunes to be 'overrated' given their popularity, but these songs encourage the audience to do exactly what the characters are doing: and that's living life one day at a time and remembering to enjoy it while you're at it.

I have very little complaints about this film; if anything, the acting left much to be desired and at times was rather jerky or akward. On that same note, however, it added a little hint of authenticity when you consider the fact that this is a movie about the shenangians teeangers (again, teenagers) involve themselves in from a perspective that is raw and grounded (amongst other things).

A film that doesn't take itself too seriously and is just entertaining for the sake of being so: I would recommend!
14 people found this helpful

Flux CapacitorReviewed in the United States on February 22, 2021
1.0 out of 5 stars
That was a waste of time
Verified purchase
I kept watching expecting it to get better but no go. There were no memorable scenes that made me laugh. The dominant theme was bullying.
9 people found this helpful

Steve WoodReviewed in the United States on January 3, 2021
3.0 out of 5 stars
The set designs and costumes are right on
Verified purchase
This movie's only real attraction is its nostalgia factor. I graduated high school in 1975 in Texas. Although this movie captures the environment of that era it is very much lacking in substance. The plot is almost non-existent. It's more like a "day in the life of" type experience. The characters are only in the moment. They are not fully developed. Neither do they undergo any meaningful growth. At the end of the movie they are all the same people that they were at the beginning. The young jock (completely miscast with Wiley Wiggins) transitions from middle school sports to high school sports. Not much movement there. And everyone wins. Except for Ben Affleck's character. He was a loser at the beginning. He is a loser in the end. There could of been so many more different characters in this movie but the filmmaker chose only to include the narrow range characters he remembers from his time as a high school jock. And the plot? Those pranksters that attacked the bully would be dead meat when the bully catches up to them later. Not in the least bit realistic. And yeah, being a high school freshman back then was that brutal and terrifying. Condoned by the school. Just like the movie. That is a realistic representation.
6 people found this helpful

top5jimmy53Reviewed in the United States on January 23, 2016
5.0 out of 5 stars
Oh yeah!!
Verified purchase
If you graduated anytime after 1970, you'll probably recognize most of these kids. There's no story, as such, just the last day of school, and everything that goes on that night. If you don't recognize them all, you'll at least relate to some of them. Lots of great young actors: Matthew McConaughey and Ben Affleck as guys that are having trouble realizing that high school has an expiration date. Jason London and Sasha Jensen as a couple lovable jocks, Parker Posey and Milla Jovovich as seniors to be, initiating the incoming frosh girls. Rory Cochrane as the stoner, and many more. Not deep, not laugh out loud funny, but very close to the real experiences many of us had. There's hardly a false note in this movie-you'll like some characters, hate some, and be indifferent to others; a lot like high school, but much more entertaining. This movie has been around for over 20 years, and I saw it when it came out, but it has lots of potential for repeated viewings. Don't go in expecting either a big comedy, or a deep social statement-more of a slice of life type of film.
34 people found this helpful

Brian Abercrombie-DUReviewed in the United States on March 28, 2020
1.0 out of 5 stars
Worst Movie Ever!
Verified purchase
This may have been the worst movie I have ever watched. There was 0 plot! I think there were attempts at humor, but if so, it was empty comedy. It was painful to watch.
11 people found this helpful
See all reviews
Back to top
Get to Know Us
Make Money with Us
Amazon Payment Products
Let Us Help You
EnglishChoose a language for shopping. United StatesChoose a country/region for shopping.
© 1996-2022, Amazon.com, Inc. or its affiliates