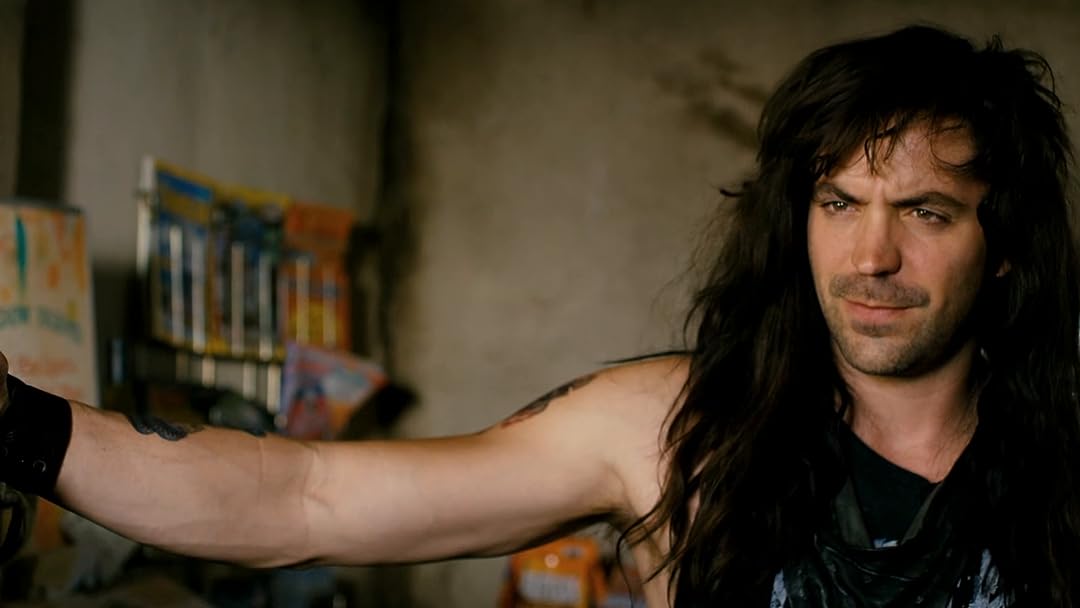 (128)
4.81 h 27 min2019NR
When the '80s one-hit-wonder glam-metal band Sonic Grave embarks on a road trip to Coachella in hopes of a comeback, their peyote trip pit stop in Joshua Tree incites a grisly attack, and they must "rock" themselves out of harm's way.

Jim TrentReviewed in the United States on January 15, 2022
3.0 out of 5 stars
Decent entry into the giant insect comedy
Verified purchase
A heads up is that they start this with a girl running through the desert as she is being chased by a giant ant. For some reason she thinks it is a good idea to strip completely down as she is running. It makes you think that they will have a lot of nudity otherwise why start the movie with such an obvious attempt to draw in the people who are there for nudity. Then they show you a couple of hot college girls in bikinis so you think they will end up naked somehow. Nope. That one needless scene in the first 2 minutes is all there is.

Anyway, the movie overall is not bad. The acting was decent the CGI was B level. It was campy and did not take itself serious. As long as you take it in the spirit of how it was made the movie will not disappoint. If you expect a serious horror film then skip this. It has no scares, it has no LOL but it is fine. The manager has both hands bitten off and at the end he is clapping along to the band with his stumps with blood flying everywhere ;)

Oscar R. GarciaReviewed in the United States on January 23, 2022
5.0 out of 5 stars
Think Metalocalypse episode with giant ants.
Verified purchase
A rock band on the way to a desert festival detours in search of a spiritual journey to ignite their decaying already marginal career. Taken in the spirit of hyperbole about the casual daily brutality of being a hard rocking metal bad; i.e. as in Deathklok in the series Metalocalpyse you will see depictions of indifference to tragedy that in any other setting would be callous and repulsive but here is made amusing by the fact that "we're a rock band and we've seen worse". A band and their manager meet with a Native American dealer in peyote who offers them "The Sun". However the dealer has specific instructions that must be followed literally or else a curse will be unleashed on those who do not follow those instructions; do no harm to ANYTHING, not even so much as a tiny bug. Anyone knows that an organism as anti-social as a rock band will of course immediately defy those rules. Chaos ensues.

Tom Arnold did a fantastic job as the manager. He added a lot of much needed chemistry to the band; constantly berating them with frustrated jibes, insults and taunts to get them to do anything towards success. I generally don't like his roles but this one was perfect for this movie. There are other A-grade (A? It is hard to tell these days what is but I think many of them are A) celebrities in this movie which surprises me since the scope of this movie was so limited. I wonder why they all consented to do this film? Did the producer have dirt on them? Or did they just need to cool off and recharge with this film?

I didn't like this film because it featured giant ants; though that is why I chose to watch it. I wound up liking this film because of the casual dark humor that pervades this scenario; but not so dark as to be repulsive. Some folks die, the band somewhat nonchalantly grapples with giant ants; because they've seen worse while the normals with them crumple in fear. Also, it did it go into the realm of overdeveloping the characters; you got the sense they were going nowhere and becoming pathetic has beens but that's it; and that's all you need for this (and many) horror movies. Whoever wrote their dialogue did a great job as well.

The CGI ants fit the theme and while you could tell they were CGI they didn't look like cardboard cutouts. So, pretty expensive but not the most expensive. The set is minimal but the setting, a desert, certainly justifies this. The only thing that was obviously pared down was the festival but *shrug* a stage, speaker racks, gantry and toilets - it was all there and all that was needed.

I liked how they employed Michael Horse and Danny Woodman as a duo; they too had good chemistry and some scenes that struck me as funny. I don't understand their role exactly as they seem to be both the perpetrator of and follow up clean up crew to the problem of the giant ants.

So, despite this being a Hollywood thing, which is normally repulsive character drama trash when it comes to horror, I would watch this again.

Paul S. PersonReviewed in the United States on June 19, 2021
5.0 out of 5 stars
Giant Ants!
Verified purchase
This is the story of a rock band undergoing disintegration which manages to incur a curse which produces ... giant ants. Not, perhaps, as large as in /Them/, but large enough to capture a good-sized towed enclosed trailer (which houses the band) and drag it pretty much wherever they want to take it to.
And, even better, there are a /lot/ of them.
So, if you are looking for a Creature Feature, this one is worth looking at!
One person found this helpful

Johnny AngellReviewed in the United States on March 9, 2019
1.0 out of 5 stars
Side Boob song on the Closing Credits is the Best Part of the Movie!
Verified purchase
This movie sucks almost all the time. It’s definite proof that Tom Arnold can’t carry a movie by himself, certainly not this turd. For such a cheaply made movie, the giant ants were halfway decent at times. As another reviewer noted, the opening scene is an excuse for the only nudity in the film. The fleeing girl decides the best way to escape a giant ant is to strip. Yeah, right.

The best thing about the movie was “Side Boob” playing over the closing credits.
3 people found this helpful

poacherReviewed in the United States on June 22, 2021
4.0 out of 5 stars
Pure trash. I loved it.
Verified purchase
Tom Arnold won me over a long time ago when he sang I'm my own grandpa. I probably wouldn't like him but I think he is funny. I've often thought we are just seeing Tom as Tom not really an actor. The juvenile in me thought the movie was good trash.
One person found this helpful

sycx1Reviewed in the United States on January 22, 2022
3.0 out of 5 stars
pretty lame
Verified purchase
they obviously spent too much money on this one. i would have used the money for a better script at least and funnier jokes.
One person found this helpful

K. EstesReviewed in the United States on March 12, 2020
5.0 out of 5 stars
Great Film! Great Fun!!!
Verified purchase
Great job done by all! Can't imagine the amount of fun they had making this film! Directing was very bold and very well done!
One person found this helpful

BonesReviewed in the United States on January 8, 2022
1.0 out of 5 stars
Useless
Verified purchase
I would have given this movie a 0 if a 0 was offered.
See all reviews
Back to top
Get to Know Us
Make Money with Us
Amazon Payment Products
Let Us Help You
EnglishChoose a language for shopping. United StatesChoose a country/region for shopping.
© 1996-2022, Amazon.com, Inc. or its affiliates