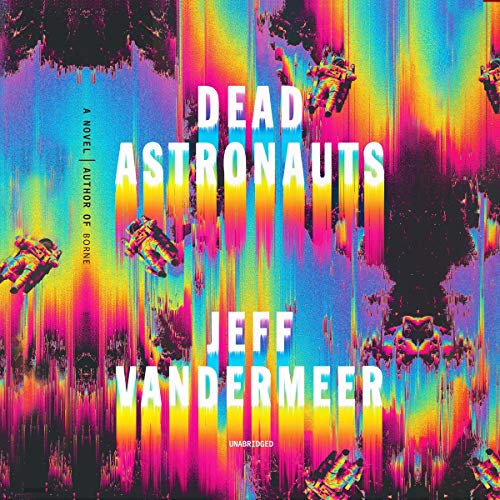 List Price: $17.47
You Save: $7.48 (43%)
By completing your purchase, you agree to Audible’s Conditions Of Use
Sold and delivered by Audible, an Amazon company
Share

4.1 out of 5 stars
4.1 out of 5
403 global ratings
How are ratings calculated?
To calculate the overall star rating and percentage breakdown by star, we don’t use a simple average. Instead, our system considers things like how recent a review is and if the reviewer bought the item on Amazon. It also analyzes reviews to verify trustworthiness.

m raymer
1.0 out of 5 stars Not worth the effort unless you like abstract poetry
Reviewed in the United States on December 8, 2019
Verified Purchase
I liked the precursor Borne book, of which this is the followup. This book is unlike Borne in that there are no discernable characters and no plot. There is only mood and impressions and nonsense wordplay. A bird dribbles mud from all orifices, a rock is there but not there and doesn't seem to mind, but does mind, but not really, and you, no I, no you maybe but perhaps not, are the victim of an elaborate hoax that went wrong, no right, but then again the jib is set while parrots in their grim restraints cry foul, as if the future is the past or the other way around, and does gimble in the gribe. ... Sorry, that is how the book sounds to me, and I read the whole thing, hoping for a respite. But then what do I know?
Read more
107 people found this helpful
Helpful
Report abuse

Amazon Customer
1.0 out of 5 stars Poor Jeff has lost his way.
Reviewed in the United States on December 13, 2019
Verified Purchase
Got hooked on the Southern Reach trilogy so I read Bourne which was somewhat coherent and mildly entertaining. This book has none of those qualities. It's like reading free verse poetry backwards. At least 2 chapters have 4 or 5 pages with words and short phrases repeated over and over again. Jeez Jeff we get it already! Or maybe we don't.

I had an eerie feeling that the entire book was a put on. A $25.00 practical al joke with no punchline. Got through it barely. Avoid this one. It's really that bad.
Read more
58 people found this helpful
Helpful
Report abuse

Kindle Customer
3.0 out of 5 stars Extremely mixed
Reviewed in the United States on December 9, 2019
Verified Purchase
A very tough book to review. It starts off relatively strong, the first quarter or so is pretty focused around a consistent, interesting story, but then it moves into more abstract waters and becomes a much tougher read. It winds its way around subjects related to the earlier events, but mostly in a vague way that focuses more on the 'feel' of the writing than on anything concrete. It's the kind of writing that's really hit or miss in print, for example, sometimes latching onto a key sentence or three and repeating that for pages on end. You can appreciate what it's going for, but it never really winds up anywhere satisfying. Maybe worth a shot, but it's the kind of thing that's definitely not going to work for everyone.
Read more
20 people found this helpful
Helpful
Report abuse

Jonathan Vaughan
5.0 out of 5 stars A Haunting and Poetic Collection of Sci Fi Parables
Reviewed in the United States on December 13, 2019
Verified Purchase
A haunting series of existential parables regarding mysterious creatures seeking to make sense of a strange future. This follow up to Borne is less directly a narrative, although there are threads if you know where to look, but a blend of different stories and perspectives. The experience and the world are surreal but possess and interior logic and a rich back story. The writing is poetic and haunting. It's almost more like Annihilation in some ways as it leans more into being a literary novel than a genre story. It's isn't boring though, as beautiful and intelligent prose finds that which is common in even the strangest of experiences. Difficult to explain but brilliantly executed, a worthy follow up indeed. The fox man, the fox is going to haunt me.
Read more
17 people found this helpful
Helpful
Report abuse

Jay Batson
2.0 out of 5 stars Hard book
Reviewed in the United States on February 17, 2020
Verified Purchase
This is a difficult rating to give. Vandermeer is nearly my favorite author, and Bourne - a preceding book in his same world - is a book I regularly recommend as a favorite?

But this book took ages for me to read because I could not bring myself to be interested in it.

The book stretches Jeff’s novelty in writing. It is (mostly) written in the style of trying to verbalize the thoughts of fabricated biological creatures, none of which were well treated by their maker at the Company. In fact, some were brutally treated.

Jeff, as his starting thesis for the book, must have said to himself “Can I demonstrate what the creatures of Bourne’s world’s Company would be like if I could get inside of those which have been coldly made, killed, remade, experimented-on, killed, re-made, and on and on in cycles? What would those creatures be? What would their minds conjure? What about those who did not live by our current ethical positions relative to biological life, and who assumed lifting things were nothing more than biological parts & fasteners that animated. Let’s assume they are all insane. How do I capture that?”

And in Jeff’s hands, these creatures are indeed insane. And, their thoughts are insane. I mean “Insane” in the formal, not casual usage. The latter 2/3 of the book is gradually a long descent into strung together dream-style, barely coherent, tenuously related phrases.

In the end, I simply did not find this thesis enjoyable. It waded up too much insanity, not enough story. (There *was* story if you were patient, stuck to the slog, and pulled it out of incoherency.) And, frankly, it was so dark (mentally) that I started skimming sections. I simply didn’t want to bathe in that state of mind for so long, lest it affect me.

I *will* say that I think the book is an extraordinary, and brilliant work. The state of mind Jeff must have had to go to in order to write this is an immense achievement. His ability to fabricate a staggering amount of this kind of material reflects him at the top of any author’s game. It is mind-blowing.

Yet, it becomes more of an exercise of sheer ability, and less a book even this dedicated Vandermeer reader can find enjoyable.
Read more
15 people found this helpful
Helpful
Report abuse

Steven Farr
3.0 out of 5 stars Complicated
Reviewed in the United States on December 18, 2019
Verified Purchase
After 5-star reviews of the Area X trilogy, and Borne, I feel like VanderMeer has taken a step backward with Dead Astronauts. The story does not feel like one cohesive piece, and for me, it lacked meaning and did not follow a typical story arc. It was very jumbled and the writing style was grating. I felt that although the story was very expansive, it did not cover a lot of ground from start to finish. Overall this book was a letdown for me. I look forward to future VanderMeer works.
Read more
14 people found this helpful
Helpful
Report abuse
See all reviews

Kindle Customer
5.0 out of 5 stars It was mindblowing. Five stars is not enough
Reviewed in Germany on December 6, 2019
Verified Purchase
It is one of these rare books that live you empty after reading last page. That make you think that there is no more to read afterwords in the entire word. Fi
Read more
One person found this helpful
Report abuse

Arianna
5.0 out of 5 stars Spedizione celere
Reviewed in Italy on January 1, 2020
Verified Purchase
Ottimo libro, arrivato con tre giorni d’anticipo sulla data di consegna prevista
Read more
Report abuse
Translate review to English
See all reviews
Back to top
Get to Know Us
Make Money with Us
Amazon Payment Products
Let Us Help You
EnglishChoose a language for shopping. United StatesChoose a country/region for shopping.
© 1996-2021, Amazon.com, Inc. or its affiliates