You've subscribed to Dead Bait! We will preorder your items within 24 hours of when they become available. When new books are released, we'll charge your default payment method for the lowest price available during the pre-order period.
Update your device or payment method, cancel individual pre-orders or your subscription at
Your Memberships & Subscriptions
There was an error. We were unable to process your subscription due to an error. Please refresh and try again. 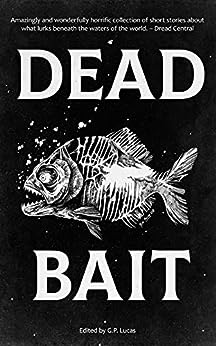 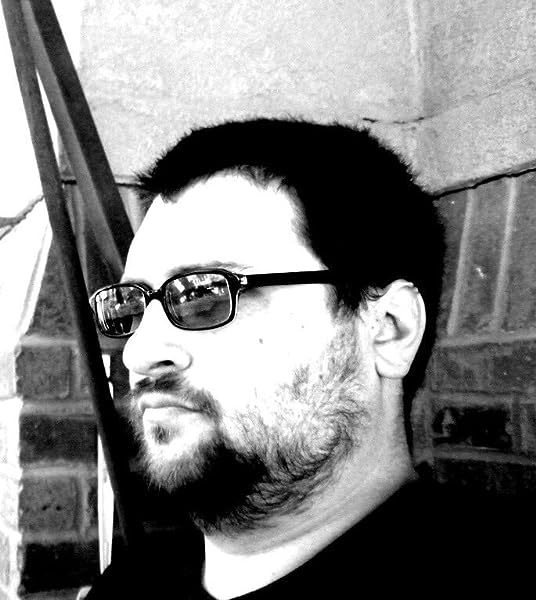 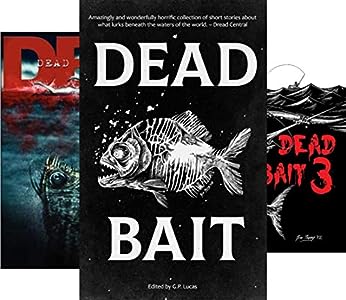 Dead Bait is a collection of stories themed around fishing and fish. It's an innocuous premise, promising father-son bonding moments and unusual variants of 'you shoulda seen the one that got away.' But if any of the creatures from Dead Bait got away, you'd be too busy screaming to appreciate your luck. The stories in this anthology manage to be the most ingeniously revolting that I have ever read. The stories range in topic from biochemically mutated parasites that invade the body via the anus ('Test Drive,' by Mike Norris, taking the expression 'ass bandit' to a new level) to fish fellatio ('Something Fishy Is Going On,' by Mark Zirbel, winning hands down as the most whack and enjoyable piece of the entire book), but no matter the premise, each story is a treat--gory, creepy or just plain nuts...Horrorr Web --This text refers to an out of print or unavailable edition of this title.

If you don't already suffer from bathophobia and/or ichthyophobia, you probably will after reading this amazingly and wonderfully horrific collection of short stories about what lurks beneath the waters of the world. --Dread Central

These graphic and shocking 19 stories will definitely make you think twice about going fishing. --Fangoria

The stories in this anthology manage to be the most ingeniously revolting that I have ever read...but no matter the premise, each story is a treat--gory, creepy or just plain nuts. --Horror Web --This text refers to an out of print or unavailable edition of this title.

3.9 out of 5 stars
3.9 out of 5
50 global ratings
How are ratings calculated?
To calculate the overall star rating and percentage breakdown by star, we don’t use a simple average. Instead, our system considers things like how recent a review is and if the reviewer bought the item on Amazon. It also analyzes reviews to verify trustworthiness.
Top reviews

Kathryn G. Owen
3.0 out of 5 stars Mixed Collection
Reviewed in the United States on August 3, 2020
Verified Purchase
I really enjoyed the final story, "Death Roe" by Mark Onspaugh. It's a melancholy tale of a man driven to obsession by a unique undersea treasure and the lengths a mother will go to to protect her children. This was the perfect story to end the collection on and was easily my favorite in the collection.

I also really enjoyed the giant crustacean tale, "Lobster Stew" by Gregory L. Norris, and "Old Man and the Puddle" by Hayden Williams was a well written tale of the perils of obsession. Meanwhile, "Blood in the River" by Steven R. Southard and "Dawes" by Steve Ruthenbeck, about an immortal vampire fish/man and a wereshark respectively, were at least pretty original.
Read more
Helpful
Report abuse

Jonathan
4.0 out of 5 stars Gruesome, Good, and all together Surprising
Reviewed in the United States on March 15, 2014
Verified Purchase
I was delighted at the wicked quality of the stories in this anthology. In the mood for monsters, "Dead Bait" delivers creatures beneath the water, and it does so with 19 stories that while they could use another editing pass, still manage to chum the water with proper terror.

The ratio of good to okay stories is 3:1 and even those okay stories aren't bad, merely unremarkable. Rather than go through every story, I'll bring up the highlights of what I found to be the bright spots.

The anthology came out strong with "Fox Goes Fission" by Ron Lemming. The story deals with an evil, cursed, rancid, hateful lake and the pages ooze with the sense of it. I could smell the foul rot, see the loathsome menace of it, hear the burbling venom and the flies.

The title of most gruesome and excessive story goes to Tim Curran and "Piraya", where the carnage at the teeth of undead piranha is told with gleeful explicitness.

Most creative is "Blood in the Water" by Steven R. Southard, dealing with a vampire that changes into a candiru.

The man seeking revenge on a wereshark in Steve Ruthenbeck's "Dawes" struck me as surprisingly heartfelt, and the story milked a sigh out of me.

In a book of monsters and death, Lance Schonberg serves up a surprisingly thoughtful and contemplative tale. I won't even nutshell it because I don't want to diminish the story, but the slow and philosophical story stood apart from the others.

The situation of "Death Roe" stands out as most unique of the set; Mark Onspaugh tells the tale of a man hiding in the desert from a mythical mermaid after he stole her eggs. It makes a fine final story.

I was satisfied enough to pick up the sequel Dead Bait 2, which is only available in ebook.
Read more
4 people found this helpful
Helpful
Report abuse

Jeffrey Swystun
3.0 out of 5 stars Fun, Guilty Pleasure
Reviewed in the United States on January 21, 2015
Verified Purchase
It took me a few months to summon the courage to buy and read Dead Bait. Outside of a tiny bit of claustrophobia, my biggest fear are creatures below the surface. I blame my brother for taking me to see Jaws when I was ten. The book is a scary guilty pleasure that is uneven but in a good way like the Creepy and Eerie comic books from days gone by. In fact, this would have made a great graphic short story collection.

The standouts for me were: Chum Bucket as it featured a leviathan and those always 'get me'; The Test Drive had a Stephen King vibe and surprise; and Lobster Stew that was by far the best written and imagined. Death Roe drew you in and taught you not to take things that are not yours...especially mermaid eggs. I think I live in Canada because for much of the year our water is frozen.
Read more
Helpful
Report abuse

William
4.0 out of 5 stars Hit or miss on the short stories but fun overall
Reviewed in the United States on May 29, 2013
Verified Purchase
I wasn't sure what to expect but this was a worthwhile read.

Also there were a couple of excellent stories that were very well written and I can easily see the author's making full fledged books out of them.

Matthew T. Carpenter
4.0 out of 5 stars Pretty good themed anthology
Reviewed in the United States on March 18, 2010
Verified Purchase
Dead Bait is an anthology of horror stories centered on fishing and aquatic critters released by Severed Press in 2009. It has no introduction (Unfortunately! I would really have liked to learn how the book came together.), 277 pages of text and a few pages of brief biographies of the authors. For the $14.95 list price (with a discount by Amazon), it is pretty generous as far as small presses go. The attractive cover art is by Tjie Tsang. There is no editor credited with the book; mostly I found production qualities good. I only noticed a few scattered typos.

As I cannot find it elsewhere I am providing the table of contents:

I have a rather specialized interest in horror, Cthulhu mythos fiction, so I go trolling in aquatic themed books to see if I can uncover a hidden gem or two. The first story, Fox Goes Fission was an overlong disorganized mess and almost soured me on the book. However, I persevered and I'm glad I did. For the most part I was entertained and some stories were well written stand outs. Old Man and the Puddle was a very nicely creepy fish story, about a man in Hawaii who finally lands the big one in his favorite fishing hole...alas. Crawlies and Test Drive were somewhat similarly themed, about the unpleasant behavior of invertebrates, and both of them made me squirm! I also enjoyed the reverse fishing story Under the Boardwalk, the Vietnam war themed Jungle Rot, Piraya as as one of several zombie-ish tales in the book and the fish/lycanthropy undercurrents in Blood in the River. I would single out Noodlers, about rednecks and catfish, for outstanding prose. I was awestruck but the horrific lunatic hilarity of Something Fishy is Going On, which defies description. For my own particular taste, I think Chum Bucket fills the bill quite nicely. Mr. Hermanson has had stories in a few Lovecrafttian books and magazine over the years. In fact I could swear I had read Chum Bucket before in some other book, but no matter. It is not overtly Cthulhu mythos but I am happy to interpret it as such.

I think most horror fans will be happy with this book, particularly if you like aquatic themes. I know I was pleased as I idled away a few nights reading. For the amount of stories you get Dead Bait is a bit of a bargain.
Read more
One person found this helpful
Helpful
Report abuse
See all reviews

Sean T. Page
5.0 out of 5 stars Fishy & Scary...
Reviewed in the United Kingdom on April 6, 2010
Verified Purchase
A collection of very different short stories all based around a fishy or watery theme. There really is something for everyone here as long as you are in to horror-type shorts.

The writing is top notch with a fantastic selection of styles on offer. Brilliant as a holiday read, to dip in & out of, as there are stories or various lengthes & sometimes a theme just catches your eye.

I bought a second hand copy for a great price - get it & enjoy. Be warned some of the stories are gory.
Read more
4 people found this helpful
Report abuse

John Haydock
3.0 out of 5 stars Better than Dead Bait 2
Reviewed in the United Kingdom on August 12, 2013
Verified Purchase
Same thing applies as review for Dead bait 2, anthology books can be hot and miss. This was more hit than miss for me because I bought Dead Bait 2, and it was cheap and the stories are short enough to keep you engaged, but it won;t win any awards
Read more
Report abuse

the wolf at the door
4.0 out of 5 stars awesome fish based horror
Reviewed in the United Kingdom on March 3, 2014
Verified Purchase
i really liked this, i was ribbed mercilously by number one daughter for taking my zombie addiction to new fishy lows, but this book romps along, the changes in pace and author add to the ride, i thoroughly enjoyed it
Read more
Report abuse

Wendy
5.0 out of 5 stars Horror Fish Stories
Reviewed in the United Kingdom on May 3, 2016
Verified Purchase
Short stories all centred around fish. Loved all of them however my favourite has to be the mermaid story.
Read more
Report abuse

Ben Jones
5.0 out of 5 stars Not dead at all.
Reviewed in the United Kingdom on June 21, 2015
Verified Purchase
Great book. Some awsome some naff stories but they all seem to work.
Read more
Report abuse
See all reviews