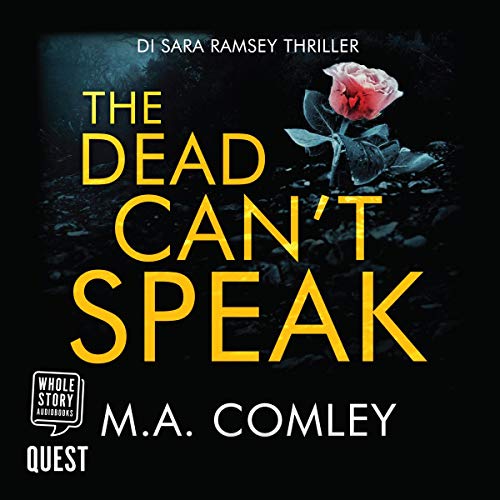 From the New York Times best-selling author of the Justice series with over two and a half million copies sold to date. Ideal thriller for fans of Angie Marsons, Robert Bryndza, and Leslie Wolfe.

Some people have secrets. And there are those who have deadly secrets. The murder of an unidentified woman in a hotel room proves to be a perplexing case for DI Sara Ramsey. Sifting through the victim's past reveals numerous inconsistencies and shocking secrets she had taken to her grave. Why had the killer silenced her? Sara and her team need to unravel the mystery, but in doing so, do they put yet more lives in danger as well as their own? In order to find happiness in her personal life, Sara is forced to deal with demons from her past.

Linda S. Prather
5.0 out of 5 stars Loved it!
Reviewed in the United States 🇺🇸 on March 25, 2019
Verified Purchase
One of the things I love about M. A. Comley's books are her characters are never one-dimensional. They have real lives, with real life problems. Sara's team has real lives with real life problems. They support each other and yet aren't afraid to call each out if it gets too deep.

In the Dead Can't Speak we have a dastardly villain, with no redeeming qualities. We get an opportunity to meet his victims, women he's used for his own purposes. Women who care about him, and may even be in love with him.

If you've followed Sara's story with No Right To Kill and Deadly Blow, you're up to date on her husband's murder. If not, I highly recommend you start with No Right to Kill and get to know Sara. She's waited a long time for her husband's murderer to be brought to justice, and now it seems she's finally going to get her wish. But will the price she has to pay be too high? Will it destroy her career and her personal life? Well, you'll have to read the book to find out.

Add to the mixture her husband's still grieving family and their demands on Sara's time. And seriously, what's up with his brother, Donald?

A fantastic character driven thriller/mystery. Love the neighbors, and I look forward to a long running series on this one.
Read more
6 people found this helpful
Helpful
Report abuse

Amazon Customer
5.0 out of 5 stars They just keep getting better, each more thrilling than the last.
Reviewed in the United States 🇺🇸 on April 20, 2022
Verified Purchase
They just keep getting more suspense than the last. Pulls you in to where you can't wait to see if they catch the killer or will he get away. Quality is excellent, couldn't find any typos.
Story line is consistent, doesn't spend too much time on referencing the past situations, just gets to the point.
Read more
Helpful
Report abuse

Sally Traver
5.0 out of 5 stars Another great British DI to follow
Reviewed in the United States 🇺🇸 on June 30, 2020
Verified Purchase
Love the characters in this series. DI Sarah Ramsey and her team have their hands full with what seems to be a mass murderer. Tough going for them because first they have to identify the victims. The killer seems to be playing games with them. Amidst all chasing down of the murderers, DI Ramsey is dealing with a personal problem due to the murder of her husband. She has tried to begin a new life with a local vet named Mark. Just as things seem to be going well, she is contacted by the killer’s gang with threats for her not to interfere with her husband’s court case. Lots of twists and turns! Read it right thru and you will too. Will be following DI Ramsey and her team.
Read more
One person found this helpful
Helpful
Report abuse

Dream Catcher
5.0 out of 5 stars Fantastic page turner
Reviewed in the United States 🇺🇸 on July 10, 2021
Verified Purchase
This is a first for me by this author. She’s fantastic the suspense holds the reader to the very end. I love her style and will read more of her books for sure. Just bought a second book. M A Comley is English and I love some of the British terms. Beautiful.
Read more
Helpful
Report abuse

Warren A. Lewis
5.0 out of 5 stars Stressful Investigation
Reviewed in the United States 🇺🇸 on February 2, 2021
Verified Purchase
Probably the best Sara Ramsey book I have read so far. Someone is after Sara, and kidnaps her veterinarian boyfriend and insists they will kill him if she reports the kidnapping to others at the precinct. On top of that a serial killer is active and the mayor's office is applying pressure. One of those books you just can't put down.
Read more
Helpful
Report abuse

Bonnie
4.0 out of 5 stars Great story!
Reviewed in the United States 🇺🇸 on June 6, 2021
Verified Purchase
Another good read! I was frustrated with Sara's action regarding Mark, but it all worked out in the end! Great job!!
Read more
Helpful
Report abuse

margaret Heher
3.0 out of 5 stars I was pleased to find a new series about a woman DCI written by a female author.
Reviewed in the United States 🇺🇸 on June 16, 2021
Verified Purchase
The first one did not disappoint, Life changes, emotional crisis, family complications and murder. The second title allowed the relationship between Carl and Clare to develop but the relationship between Sara and Mark did not feel natural.The murders increased in violence. This last one although graphic in description of the murders was even less believable. I will try one more. If the experience is the same I am a dearth at a new series will be in the forecast.
Read more
Helpful
Report abuse
See all reviews

Claire Troote
4.0 out of 5 stars Another Good Read
Reviewed in the United Kingdom 🇬🇧 on October 23, 2021
Verified Purchase
When a woman is found murdered in a hotel room with no source of ID, having checked in under a false name, Sara and the team struggle to identify who she is. When her ID turns up on another victim, it triggers a race against time to find this killer before he can take any more lives.

During the investigation Sara is informed that the police have arrested the leader of the gang responsible for her husbands death. She's also still dealing with the vandalism and threats to her own safety and when these people step up their hate campaign against her, can she keep her wits about her and save not only herself but her loved ones and colleagues from being caught in the crosshairs.

My one disappointment is that the unfinished ending from the previous book wasn't addressed in this one. The previous book, regarding her investigation into the kidnapped children, ended with the police having rescued one child, arrested the gang involved and locating the whereabouts of the remaining children, who had been sent overseas, but didn't address them being brought home and reunited with their families etc despite it being hinted that this story would be wrapped up at a later date.
Read more
Report abuse

In this, the third in the series, the killer was soooo creepy. Seriously, I shuddered several times while 'watching' (which is what it felt like) him commit his crimes.

For DI Ramsey and her partner, there isn't much to go on to help crack the case, but as her frustration with lack of progress increases, Sara finds her past clashing with her present in explosive fashion.

Hard to give more of a review without too many spoilers. Suffice to say, this series is building and building with each book. Can't wait for the next.
Read more
2 people found this helpful
Report abuse

oldgranny
1.0 out of 5 stars Avoid this series .not improving by book 3 of 4 in series
Reviewed in the United Kingdom 🇬🇧 on April 26, 2019
Verified Purchase
I have read most books by this author and can’t wait for the next one to come out. I’m now on book 3 in this series and unfortunately I don’t think I will finish it and will not buy the 4th in the series. It is not very entertaining to read and I am sickened by her volatile responses to any minor incident in her life. Just read her ridiculous response to a threatening text message and her unprofessional behaviour that would be picked up at any interview for an inspectors post. She behaves in a very childish way with her sergeant so overall I feel that I’m reading a different author from the one I have admired for such a long time. Sorry to have to downgrade this book and series because I feel very disappointed at this one
Read more
2 people found this helpful
Report abuse

Griffy
5.0 out of 5 stars Fab book!
Reviewed in the United Kingdom 🇬🇧 on June 24, 2019
Verified Purchase
This is the third book in the series and I must say, it keeps getting more addictive. This is a dark read, one in which a serial killer is targeting beautiful young women and toying with the police along the way.

I love this cat and mouse style novel, it had me on tenterhooks all the way through. On top of all that, DI Sara Ramsey had major problems of her own to deal with. The author really explored her pain and anguish with realism and sensitivity.

One thing I’m really enjoying about this series is the developing (work) partnership between Sara and Carla, it’s a delight to read. The chapters written from the murderer’s perspective were insightful and gripping.

All in all, The Dead Can’t Speak is a fantastic police procedural. Definitely a speedy read and a satisfying one too. Fab book!
Read more
One person found this helpful
Report abuse

Lexa L.
4.0 out of 5 stars Excellent!
Reviewed in the United Kingdom 🇬🇧 on May 12, 2022
Verified Purchase
A chilling serial killer playing games with the police, and is Sara’s romance with Mark on the rocks? As usual, our heroine is trying to go it alone (why don’t people realise that never works?) but she needs backup and when she admits that, things start to move - bringing Philip’s killers to justice. Standing by what I said last book, though. I’m betting the harassment won’t stop.
Read more
Report abuse
See all reviews