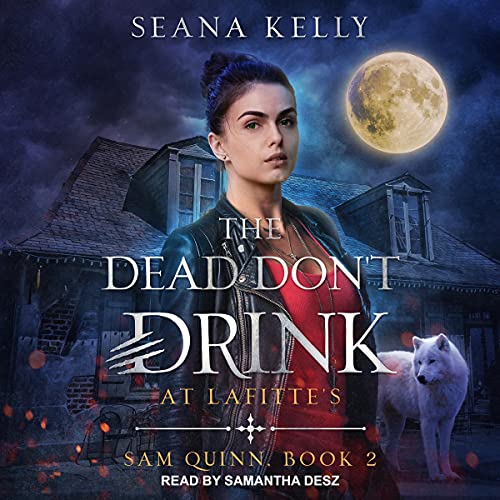 I'm Sam Quinn, the werewolf book nerd owner of the Slaughtered Lamb Bookstore and Bar. Things have been busy lately. While the near-constant attempts on my life have ceased, I now have a vampire gentleman caller. I've been living with Clive and the rest of his vampires for a few weeks while the Slaughtered Lamb is being rebuilt. It's going about as well as you'd expect.

My mother was a wicche and long dormant abilities are starting to make themselves known. If I'd had a choice, necromancy wouldn't have been my top pick, but it's coming in handy. A ghost warns me someone is coming to kill Clive. When I rush back to the nocturne, I find vamps from New Orleans readying an attack. One of the benefits of vampires looking down on werewolves is no one expects much of me. They don't expect it right up until I take their heads.

Now, Clive and I are setting out for New Orleans to take the fight back to the source. Vampires are masters of the long game. Revenge plots are often decades, if not centuries, in the making. We came expecting one enemy, but quickly learn we have darker forces scheming against us. Good thing I'm the secret weapon they never see coming.

4.6 out of 5 stars
4.6 out of 5
1,665 global ratings
How are ratings calculated?
To calculate the overall star rating and percentage breakdown by star, we don’t use a simple average. Instead, our system considers things like how recent a review is and if the reviewer bought the item on Amazon. It also analyzes reviews to verify trustworthiness.
Top reviews

M. Grigsby
5.0 out of 5 stars Another Hit!
Reviewed in the United States on April 13, 2021
Verified Purchase
“The Dead Don’t Drink at Lafitte’s” is an excellent follow up in the Sam Quinn series. Bar and bookshop owner Sam is highly anticipating the renovations to her bar after enemies destroyed it. However, on her way to check on the progress of the construction, she has a run in with a ghost who warns her that her lover, Clive, is in grave danger.

Sam rushes off to the rescue as a few New Orleans vamps headed up by Amelie, an ex of Clives make her grand entrance. Little does she realize her group is about to be slaughtered rather than the other way around. This little melee gives Sam and Clive a chance to cull through his remaining people to look for turncoats.

Of course, one good turn deserves another so Clive and Sam head to NOLA for a little rest and retribution to Lafitte, Master Vamp of the city and a deceitful little weasel. What occurs next is a lot of treachery, intrigue and some of the best fun imaginable. I am once again reminded why this series quickly becoming one of my favorite. There is plenty of colorful characters and lots of action. I for one cannot wait for the next book.
Read more
2 people found this helpful
Helpful
Report abuse

Muzikroxme
5.0 out of 5 stars An Author worth reading!!
Reviewed in the United States on April 15, 2021
Verified Purchase
After reading the first book, I had to read the next. I was not disappointed.

Like another reviewer wrote, I too am a huge Ilona Andrews fan and have re-read the Kate Daniels series so many times. There are very few writers out there that can compare to their storytelling. I stumbled upon this author hoping the story would be worthwhile after so many really bad ones and I was very happy that I finally found one.

Sam is a great character. Her growth between books one and two are masterful. The secondary characters are stellar. I can't say enough good things about both books, except to keep up the great work. I can't wait until October for book 3!
Read more
4 people found this helpful
Helpful
Report abuse

Kindle Customer
3.0 out of 5 stars The Dead
Reviewed in the United States on May 27, 2021
Verified Purchase
Book 2 is an excellent book. The reason for 3 stars is because of Russell. He is Clive's second but he was not treated according to his position. More was expected after the big scene in book one where Sam told Clive how he was being a racist (didn't use those words, but that's the point). Now in book 2 Daniel (drive for the vamps) is killed because his was plotting against Clive. But they still needed a driver because the master of the city couldn't drive himself, so they chose Russell. This is written in the 21st century not the first. Good book, but some of long held belief is still alive and well.
Read more
3 people found this helpful
Helpful
Report abuse

Joanna J
4.0 out of 5 stars Second in the Sam Quinn Urban Fantasy series
Reviewed in the United States on September 21, 2021
Verified Purchase
The Dead Don’t Drink at Lafitte’s is the second book in the Sam Quinn series about a lone werewolf from San Francisco and her diverse group of supernatural friends. This follows closely on from the events of The Slaughtered Lamb Bookstore and Bar, and I would recommend reading that first - you do get some recap here, but the world-building and mythology are established in the first book and taken as read here. This is fun urban fantasy with great characters making up for a lack of originality in the premise and plot.

Sam is now living with sexy English vampire Clive, the Master of the City, while her bar and apartment are being rebuilt, but is struggling to win over his “nocturne” - as his family of vampires are known. When a delegation from New Orleans stage an unprovoked attack, and only Sam’s new abilities save the day, the team decide they must travel to Louisiana to sort out arrogant trouble-maker Lafitte once and for all.

While vampires and werewolves are staples of modern UF, the best part of these books are the range of other creatures - wicches, demons, ghosts, even a Fury, all interacting more or less amiably - I particularly liked hilarious new character Stheno - I won’t spoil her species, but it’s a doozy! Sam is a likeable heroine although I found her transition from frightened victim (in the last book) to unassailable badass a bit rapid. This had lots of well done fight scenes, and a tolerable romantic subplot - I’m not sure we needed the corny sex scene but at least there’s only one. I didn’t like the increase in swearing compared to the last book - including the dreaded c-word - completely unnecessary even if you’re trying to convey how despicable an antagonist is.

There were some minor mistakes and plot holes that were disappointing for a published book (this was not an ARC - I actually bought it!) Nothing serious. There were no great surprises in the plot but I enjoyed the adventure regardless and look forward to the next instalment, which is out soon - and I’m pleased to see that Sam does get to re-open her bar, which was my favourite part of the first book.
Read more
Helpful
Report abuse

E. Watkins
5.0 out of 5 stars An amazing book
Reviewed in the United States on April 19, 2021
Verified Purchase
Loved this book! A perfect flow from the first book in the series to this one. I love how the author describes characters and places with such depth and precisian. It makes you feel like you are right there in the room with Sam, fighting the evil scum of the world. Or when Sam is eating and the author describes the food so well my mouth starts to water, wanting to bite into that lovely beignet with warm delicious sugar. I felt connected to Sam and Clive, how they always stay in touch and never stop thinking about the other one's safety or place in their lives. It is so great to have characters in a story that you feel so strongly about you can't wait until your work day is over and you can get back to reading. I loved the ending and how we got a tiny glimpse of the 3rd book. I am so looking forward to reconnecting with the bar and bookstore and Sam's continued quest to discover her true talents. Awesome series a real page turner for sure!
Read more
3 people found this helpful
Helpful
Report abuse
See all reviews

Paperback Dinosaur
5.0 out of 5 stars FEARSOMELY GOOD!
Reviewed in the United Kingdom on July 13, 2021
Verified Purchase
I wondered if the second book in the series would be as good as the first - it's even better. This book is a non stop action fest set mainly in New Orleans. Sam's powers are growing, as is her support 'gang' of paranormals, now she has one hilarious gorgon to rely on. The bond between Sam and Clive is deepening and becoming more intense. The support for each other is absolute, which is just as well with everything Sam has to go through. The downside is we now have to wait till October to find out what happens next.
Read more
Report abuse

Kindle Customer
5.0 out of 5 stars Cannot recommend this series enough
Reviewed in the United Kingdom on April 17, 2021
Verified Purchase
This series somehow manages to be hilarious, heart wrenching and steamy all at once. The main character Sam seems so real and relatable (impressive for a half werewolf/half wicche). I love how the author handles her character development, she suffers through severe trauma and doesn't immediately bounce back but instead struggles to find her inner badass and overcome her past. If you're blood thirsty but also in need of a good laugh, this is the series for you.
Read more
Report abuse

HWilks
4.0 out of 5 stars Yeah liked it
Reviewed in the United Kingdom on April 13, 2021
Verified Purchase
I pre-ordered this so dived in straight after a re-read of A&O series by P. Briggs. A hard gig to follow and that could well be why I liked rather than loved. I do like Sam but unfortunately find some of her actions like stomping off to sleep elsewhere a bit immature. However, a full on progression to the story and look forward to the next.
Read more
Report abuse

Kindle Customer
5.0 out of 5 stars Adventures of Sam
Reviewed in the United Kingdom on April 18, 2021
Verified Purchase
And her friends. With her powers coming in Sam and Clive and friends, a gorgon, a dragon, a demon and Meg, Owen and ....lots of vampires visit new Orleans for fun and blood and guts! Her bar and bookshop are back up and running and doing good business, these are good tales give it a go you will enjoy the stories
Read more
Report abuse

IcedVelvet
4.0 out of 5 stars Second in the series, a good follow up.
Reviewed in the United Kingdom on June 11, 2021
Verified Purchase
Following on from the first in the series, make sure you read that first, this takes the story on and shows more character development. It's an interesting read in its own right but it is very clearly part of a series with an overriding story arc that shows promise. Yes, I will be buying the next one at some point.
Read more
Report abuse
See all reviews
Back to top
Get to Know Us
Make Money with Us
Amazon Payment Products
Let Us Help You
EnglishChoose a language for shopping. United StatesChoose a country/region for shopping.
© 1996-2021, Amazon.com, Inc. or its affiliates