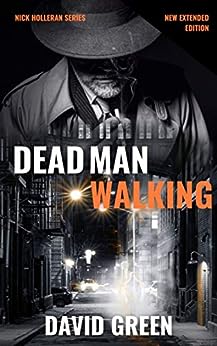 Then he died and returned to life, realizing everything he thought he knew was a lie. There is a Hell, and we are living in it. Demons, ghosts, and fallen angels live amongst us, and only a cursed few know.

Taking cases to earn his ticket into Heaven, a job falls into Holleran's lap that tests his new found virtues, when he is forced to deal with the one thing he has avoided, the man that killed him. Will Nick be able to keep his past behind him, or will it destroy his present?

Revenge is a sin, and sinners stay in Hell.

** Get an in-depth look into the world of your favourite private detective Nick Holleran in this brand new extended edition of Dead Man Walking. **
Read more
Previous page
Next page

Jessica Halsey
5.0 out of 5 stars Could not put it down!
Reviewed in the United States on July 22, 2021
Verified Purchase
Dead Man Walking is one of the best paranormal private investigator stories I’ve read in a long time. Nick Holleran is both delightfully sarcastic and sympathetic. You really feel for him and you can tell he really feels for other people, even when he has to shoot them in the face. He also has excellent taste in music. Green is a master storyteller and Nick’s voice and personality are beautifully crafted.

This book puts a unique twist on paranormal investigation, and given the vastness of the genre, that is really hard to do. The world building is wonderful and I’ve never seen a Hell on Earth concept like this before. Green definitely does not disappoint with this one. If you’re a fan of Edward Lee’s City Infernal, this is for you.
Read more
One person found this helpful
Helpful
Report abuse

Darcy Smith
5.0 out of 5 stars A Fantastic Story!!!!!!
Reviewed in the United States on August 27, 2021
Verified Purchase
What a fantastic story. It is PI work at its best. I love how the supernatural is mixed with the living on this. It is a stunning story that is well written. It has fantastic characters with amazing personalities. Yes, the story is a shorter one but is still a great story that draws you in and doesn’t let go. The ending was surprising but yet well planned. I really am intrigued to see what the next book holds.
Read more
One person found this helpful
Helpful
Report abuse

Math Nerd
5.0 out of 5 stars Misdirection, shady characters, good mystery.
Reviewed in the United States on July 6, 2021
Verified Purchase
This book has all the characteristics of film noir, with the addition of magic and dead people who are not quite completely dead. This mystery is a little bit different in that we know who tried to kill Nick Halloran, a bad news character named Dean. The wife of the killer, Michelle, hires Nick to find out why she is being stalked. Discovering that is what Nick has to solve.
Read more
One person found this helpful
Helpful
Report abuse

Governmentality
5.0 out of 5 stars A beautiful bit of noir
Reviewed in the United States on July 25, 2021
Verified Purchase
I haven't enjoyed a paranormal detective since the Kolchek books. Dead Man Walking is like a gift from a parallel universe where Cain had visions. Read it.
Read more
One person found this helpful
Helpful
Report abuse

CNola.author
4.0 out of 5 stars Excellent cast of characters!
Reviewed in the United States on August 11, 2021
“Dead Man Walking” follows private detective Nick Hollaran, as he navigates his way through his “second” life, having died briefly during an encounter with a bad guy, Wheeler, the villain of his story. Since being brought back, Nick has come to realize two things, that Heaven does exist and Hell is real and is on earth. He can now see, hear and interact with all of those demons of the dark as he goes about his life, and uses his newly discovered resources of the dead and demonic to help him solve a wide variety of cases.

The first story, “Dead Man Walking” is a short, quick read that serves to introduce Nick Holleran and his new take on life. It also serves up his first case and allows the readers to see the glimpse into the Hell that Nick now sees all around him, every day. Several key characters are introduced including a love interest of sorts, Rosa, the woman that saved him the day he died. Ruby, owner of Styx Bar, where both humans and Hell dwellers go, and she seems to be a constant source of information and advice for our doomed detective.

Cyril seems to be a character that we can expect to see again, not that many people want to see a giant demon with an attitude. Suraz, is a Nephilim, described as children of angels and daughters of men, they fall on the Hell Hierarchy just below Lucifer himself. Charon, the ferryman between Earth and Hell dimensions. Then there is Darcy, the ghost of a young girl that inhabits his office.

Green does an excellent job setting up the characters, the details, the setting and paints an elaborate scene of each one so you can visually see them and the events as they unfold. The action is well-written, the details plausible and researched and everything smoothly falls into place as it should.

Green has created an excellent world for his cast of characters to play in and I hope he visits it again and again. I can see a long line of cases coming for Nick Holleran. Four stars for fun, fast-paced demons and detectives!
Read more
Helpful
Report abuse

Friend Zone
5.0 out of 5 stars Hardboiled even for the underworld
Reviewed in the United States on July 28, 2021
Nick Halloran is a cool detective, hardboiled, but with a supernatural twist - reminded me of the great film series from the 90s, Cast a Deadly Spell and Witch Hunt. If you love your procedurals with chills and scares, then definitely get this series by David Green.
Read more
One person found this helpful
Helpful
Report abuse

Menagerie Reviews
1.0 out of 5 stars Waste of time
Reviewed in the United States on July 3, 2021
This is one of those occasions I wish Amazon allowed zero stars. Or maybe half, just for the effort. I couldn't get three pages into this 3in x 4in "book." In that short spanse, the story was nothing more than an overinflated ego trip by an author well out of his depth. I have encountered Mr. Green's work in other collections and my best advice is to save your time and avoid him altogether. To call his creations disappointing is a kindness.
Read more
Helpful
Report abuse
See all reviews

Alan
5.0 out of 5 stars Supernaturally Good.
Reviewed in the United Kingdom on October 11, 2021
Verified Purchase
Damn, that was fantastic, an excellent short supernatural read by David Green. Told from the main protagonist private investigator Nick Halloran's point of view, I couldn’t help but play Mickey Rourke's voice from Sin City for Nicks character in my head and it was bloody brilliant...🤣 I love David's writing, he knows how to grip his readers from the very start and will keep you sitting on the edge of your seat right till the end with suspence. Poor oul Nick has been given a second chance at life after being gunned down following a tail he has been investigating. Since his near death experience, he finds out that we humans have been living in hell and that the supernatural live among us and all around us. On the 5th year anniversary of his death, He is offered a job by the wife of the man that killed him. Will he take it and bring back all the nightmares that has been haunting him. Absolutely great plot and setting, if you love being spooked by demons and ghosts. Then check this out, highly recommend. Now for book 2...😁👹😈👻
Read more
Report abuse

Amazon Customer
4.0 out of 5 stars Dark noise at its best urban fantasy style.
Reviewed in the United Kingdom on July 13, 2021
Verified Purchase
An excellent enjoyable dark urban fantasy read. Only problem it's far too short a read. The author is a bad man, his excellent descriptive style of writing really grabs you the readers attention and holds it right till the end. Then it's annoying that the of the story has ended and you are wanting more to read.

auto.erraticism
5.0 out of 5 stars An excellent read
Reviewed in the United Kingdom on July 4, 2021
Verified Purchase
I read the shorter version of this and enjoyed it but this re-released version is so much better. There are a couple of phrases I laughed out loud at and the whole story is well paced and full of wit.
Read more
Report abuse

Wendy Hoskins
5.0 out of 5 stars Excellent extended version
Reviewed in the United Kingdom on August 19, 2021
Verified Purchase
My first visit to Haven was when I read the original Dead Man Walking, and this extended version manages to offer so much more and keep the reader enthralled. It fleshed out the original story with much more detail and draws you into one 'Hell' of a story.
I'm off to read The Devil Walks In Blood
Read more
Report abuse
See all reviews