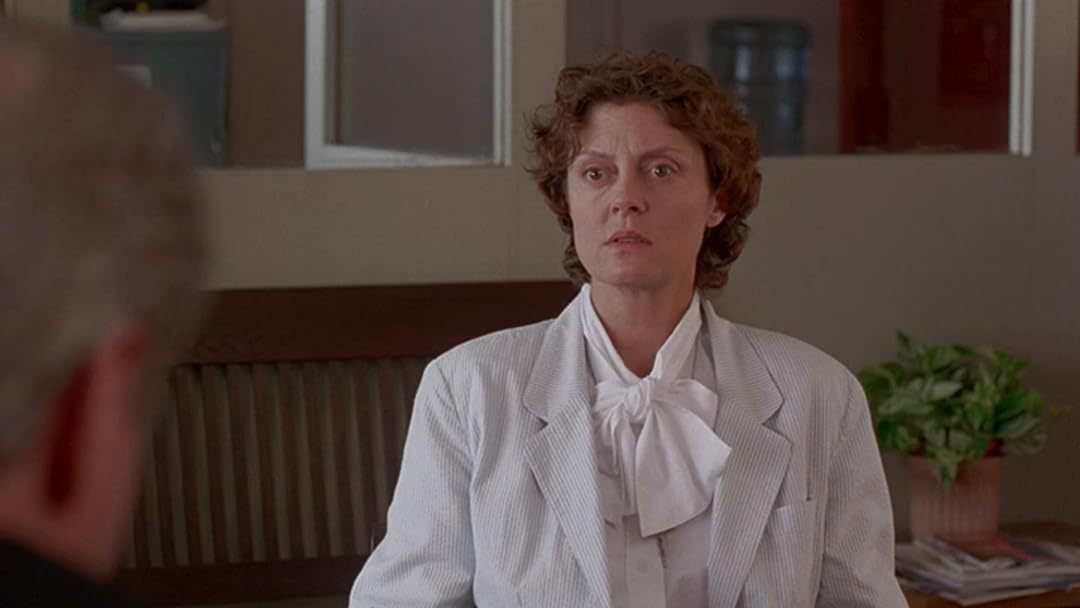 (1,036)
7.52 h 2 min1995R
In an Oscar-winning role, Susan Sarandon portrays Sister Helen Prejean, a spiritual woman who embarks on a dangerous quest with a convicted killer and the profound changes it makes in her life.

RaechelrocksReviewed in the United States on June 27, 2019
5.0 out of 5 stars
Wow....really good movie that makes you think about your beliefs
Verified purchase
I can't believe that this movie is over twenty years old and I just watched it for the first time. A friend suggested it to me as I have been struggling with forgiveness towards a person who hurt me decades ago. I am pretty certain this movie was meant for me to watch tonight as it made me think of my own anger, unforgiveness and lack of humility in my own humanity. Very good movie with a deep, deep message. Susan Sarandon and Sean Penn as usual knocked this one out of the park. Very good and highly recommended.
11 people found this helpful

DANNIReviewed in the United States on January 25, 2020
5.0 out of 5 stars
Good movie
Verified purchase
I believe in the death penalty, but ONLY for the worst of the worst... which it was originally intended for. Child rapists/murders, multiple murders, serial murders, any murder with torture. The problem with the death penalty, and life in prison sentences that boils my blood, is that if DNA is found AFTER a conviction...the courts will refuse to let it be tested. Can you imagine being innocent of a horrific crime, but convicted, and DNA was found and there would be NOTHING you could do about it, to be tested? How disgusting is our judicial system that they could care less about the truth with DNA? Thank goodness we have the Innocence Project, that will fight tooth and nail on cases they find unjust. But they only can take a few cases out of thousands. Jeffery Dahmer didn't even get the death penalty...well...he did in prison.
4 people found this helpful

joel wingReviewed in the United States on February 13, 2021
4.0 out of 5 stars
Challenges the audience if they really oppose the death penalty or not
Verified purchase
Dead Man Walking is based upon a true story and focuses upon Susan Sarandon as Sister Helen Prejean who becomes the spiritual adviser to death row inmate Matthew Poncelet played by Sean Penn. Sarandon has to counsel him as his execution nears and teach him morals. The dilemma is whether he will admit to his wrongs or continue to plead his innocence? In turn, the movie poses the question whether you can be against the death penalty even if the person to be executed is guilty as Penn’s character was? Like Penn having to face the moral consequences of his actions the audience is asked to put their beliefs on trial as well.

Most of the movie is very low key as it takes place in prison with Sarandon and Sean talking to each other, usually through a thick pane of protective glass. She tries to teach him the word of God to get him to open up about what he did. Penn’s character is no way a nice character or someone who was accused of something he didn’t do. He’s actually a racist and an idiot when he talks to the press.

On the other hand probably the most difficult parts of the film are Sarandon meeting with the families of the two people Penn killed. They are very powerful scenes and helps bring home what Poncelet did. The ending is just as strong and emotional.

Finally the film touches on the politics of the death penalty. As Penn notes at the start only poor people are on death row. He had a public defender who’d never done a death penalty case before and only raised one objection during the trial. The governor was also pushing being tough on crime and executing people as part of his political campaign for office.

Elizabeth T. HoevelerReviewed in the United States on October 7, 2018
5.0 out of 5 stars
Another fond and favorite re watch
Verified purchase
Sean Penn was incredible as Matthew Poncelet, a scared, illiterate
accomplice to two savage murders, facing the death penalty and in denial
about his actions. Susan Sarandon, another fine actor, played Sister Helen
Prejean with subtlety and grace.
This is a true story about Sister Prejean's mission to lead Matthew to the realization
of what he and another man did to two young adults, who were grabbing alone time
one night in a dark wood.
In doing this, she could help him confess to God and ask for forgiveness.
There's violence shown while Poncelet finally does remember clearly what he did and
what part he played. In a very moving scene with Sister Helen, he honestly explains how
he felt at the time.
DMW is a very thought-provoking, intense story written, filmed and
acted beautifully. Stick around for the credits because the accompanying
music will transport you to another place!
2 people found this helpful

dlcliffReviewed in the United States on May 17, 2019
5.0 out of 5 stars
Important movie about the power of forgiveness.
Verified purchase
This is a movie about forgiveness, and how it works on both sides. A sin is a sin in the great scheme of things (in God’s eyes). Forgiveness of self or others doesn’t mean dismissing what they did. It doesn’t mean your saying it’s okay....It’s about freedom from hate. Hate binds the soul to darkness - and guilt and shame can’t really be felt by a person unless they feel loved first. It’s easy to hate, but it’s a challenge to forgive. The work of forgiveness is rewarding so you get a lot in return for the work done though. I always say - the opposite of anger is fear. Sometimes the fear is feeling the pain another caused you (fear of those feelings), so thus....the emotional work it takes to forgive.

Ben MaerzkeReviewed in the United States on December 8, 2017
5.0 out of 5 stars
Makes you question your stance on the death penalty... No matter what side you're on.
Verified purchase
I'm a high school ethics teacher. Any movie that ends with a classroom of teenagers feeling visibly upset and confused about the modern social/political landscape is an A+ in my book.
16 people found this helpful

T.S. DavisReviewed in the United States on August 16, 2018
5.0 out of 5 stars
The leads were excellent!
Verified purchase
While I staunchly disagree with a lot of the politics of the two leads, they both certainly earned their cash in their performances. Sean Penn did an amazing job during the execution scene. Susan Sarandon was very thought provoking. She was able to show a different side of a human being; one that wants to serve all of humanity regardless of background. Well done to both of them. Very well done.
3 people found this helpful

Diane CrowReviewed in the United States on January 17, 2021
5.0 out of 5 stars
Exceptional Realism
Verified purchase
I would like to have potential viewers know that this movie isn't just a movie, it is a work of cinematic art. One of the finest character actresses of her generation (Susan Sarandon) is completely realistic in her portrayal as a nun who reached out to a man on death row who reaches out to her via a letter and they begin a completely unprecedented friendship that first brings her to talk, then to fight to save his life, and then she fights a triumphant last minute battle to save his soul. She succeeds and he manages to die in full redemption. She does try to save his life, but throughout the film she also works hard to get him to take responsibility for the role he played in bringing about the death of two young people.
See all reviews
Back to top
Get to Know Us
Make Money with Us
Amazon Payment Products
Let Us Help You
EnglishChoose a language for shopping. United StatesChoose a country/region for shopping.
© 1996-2022, Amazon.com, Inc. or its affiliates