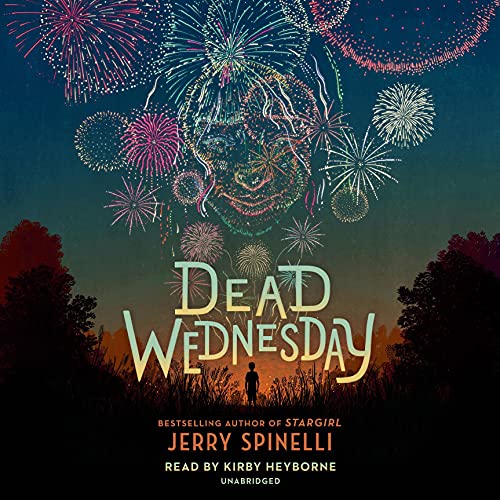 Can playing dead bring you back to life? Maybe only on Dead Wednesday.... On this day the worlds of a shy boy and a gone girl collide, and the connection they make will change them both forever. A brilliant new novel from the Newbery Medal winner and author of the New York Times best seller Stargirl.

On Dead Wednesday, every eighth-grader in Amber Springs is assigned the name and identity of a teenager who died a preventable death in the past year. The kids don black shirts, and for the whole day everyone in town pretends they're invisible - as if they weren't even there. The adults think it will make them contemplate their mortality. The kids know it's a free pass to get away with anything.

Worm Tarnauer feels invisible every day. He's perfectly happy being the unnoticed sidekick of his friend Eddie. So he's not expecting Dead Wednesday to feel that different. But he didn't count on being assigned Becca Finch (17, car crash). And he certainly didn't count on Becca showing up to boss him around! Letting this girl into his head is about to change everything.

This is the story of the unexpected, heartbreaking, hilarious, truly epic day when Worm Tarnauer discovers his own life.

Special invitation from Audible!
Learn more about Membership
List Price: $21.00
You Save: $2.62 (12%)
By completing your purchase, you agree to Audible’s Conditions Of Use
Sold and delivered by Audible, an Amazon company
Share

4.1 out of 5 stars
4.1 out of 5
34 global ratings
How are ratings calculated?
To calculate the overall star rating and percentage breakdown by star, we don’t use a simple average. Instead, our system considers things like how recent a review is and if the reviewer bought the item on Amazon. It also analyzes reviews to verify trustworthiness.
Top reviews

Mercedes J.
TOP 1000 REVIEWERVINE VOICE
4.0 out of 5 stars Solid Middle Grade Story...
Reviewed in the United States on October 30, 2021
This book has two very clear and very different parts. The first half is total middle grade. Obnoxious middle schoolers being obnoxious. Not understanding the gravity behind their towns 'Dead Wednesday' tradition and looking at it as an excuse to have a slacker day at school and get away with whatever they want.

Worm is our quiet and shy protagonist, but he and his group of friends are typical 14-year-old kids who are clueless and immature. I didn't mind the first half of the book, but it is in stark contrast to the second half.

The second half of the book is Worm spending the day with the ghost (or Spiritual Maiden, if you will) of his Dead Wednesday assigned victim, Becca. He matures at lightning speed, and the experience has left him forever changed. He has some really profound thoughts and does a complete 360, becoming an almost entirely different person by the end of the book. Much more somber and wise. It's like this 14-year-old boy has aged 20 years in the span of a few weeks. It kind of felt like reading two different books.

Overall though, I enjoyed the story and its message. If you read it for what it is, a coming-of-age Middle Grade fiction story, then you'll enjoy it.

If you spend the entire time getting all up-in-arms about how this fictional town in this fictional story makes fictional kids assume the identity of fictional teenage accident victims as a way to teach them the gravity and finality of death and to not be so reckless, then you're going to hate this, so you may want to skip it.
Read more
Helpful
Report abuse

Julie
4.0 out of 5 stars Great Book for Upper Middle School Students
Reviewed in the United States on August 3, 2021
I have been a fan of Jerry Spinelli for a long time. I fell in love with Maniac Magee in my early years of teaching and have enjoyed everything he has written since. I do have to say his realistic fiction titles are more my jam, and his titles that are more realistic fantasy have not been as satisfying to me as a reader. With that said, Dead Wednesday will be a popular title with middle schoolers, in my opinion.

Dead Wednesday is about a school that plans a day at the end of the year where eighth grade students are assigned a persona for the day of a deceased teen from their state in order to encourage them to make future decisions that will keep them safe from dangerous teen behaviors. They are given a black t-shirt, a card with information about the deceased teen and the events surrounding their death, and are ignored by school staff and community members for the rest of the day to give them time to reflect on the tragic loss and how they might choose differently. The main character, Worm, is assigned a young woman, Becca, who was killed in a preventable Christmas Eve car accident. It is a thought-provoking story that challenges the reader to consider how our choices and decisions impact no only ourselves, but everyone around us.
Read more
Helpful
Report abuse

A Bohman
4.0 out of 5 stars Definitely for older middle grade readers!
Reviewed in the United States on August 5, 2021
Thank you to NetGalley and Random House Children’s for the review copy of this book. I found Dead Wednesday intriguing because the cover is beautiful. When I investigated further, I saw that it was by the fabulous Jerry Spinelli, and knew I had to give it a shot!

8th graders at Worm’s school are given the name of a young person who has passed away over the past year in a preventable event. The rest of the day, the 8th graders are ignored and treated as if they are dead. It is supposed to be an exercise to get them thinking of their own mortality. Unfortunately, it is seen by many as an opportunity to do everything they should do and get away with it. Worm feels pretty indifferent about the day, until his person shows up next to him at the water fountain at school. He spends the day with the 17 year old girl who crashed her car on Christmas Eve.

The story was intriguing and engaging. The characters were interesting. I would definitely hesitate from putting this in the hands of a student below 7th grade (even though the grade level says 5-6). Ideally, this book would be read by a group with conversations to help absorb and comprehend the message.
Read more
Helpful
Report abuse

Amazon Customer
3.0 out of 5 stars 3.5 stars
Reviewed in the United States on August 30, 2021
After hearing an interview with the author regarding the inspiration for Dead Wednesday I immediately ordered a copy of the book. It did not disappoint. Toward the end of the school year a small Pennsylvania town observes Dead Wednesday, a day when each 8th grader is given the identity of a teenager who died the previous year due to preventable behavior – drug overdose, reckless driving etc. The students don black t-shirts and are ignored by teachers and townsfolk alike as if they did not exist. While most of the 8th graders look forward to the day as one of partying and goofing off, the chance to go completely unnoticed fits perfectly into shy Robbie’s (Worm’s) world. Things change, however, when Worm meets his assigned teen, Becca Finch. The result is a coming-of-age story of self-acceptance that taps into the middle grade psyche with heart, humor, and a voice that will resonate with middle grade and adult readers alike. 3.5 stars
Read more
Helpful
Report abuse

J. Margeson
3.0 out of 5 stars Another sweet Spinelli story
Reviewed in the United States on August 3, 2021
Jerry Spinelli never disappoints but Dead Wednesday was special! The set up - Dead Wednesday - pulled me right in, and since I was reading it as my school year was ending, I absolutely could relate to everyone counting down the final days of school. The characters are full and relatable, down to details like how Worm's cystic acne seemed to affect his self esteem. I enjoyed the setting as unique (writer's compound) but also traditional (living on the edge of town). I thought Becca reminded me a little too much of Star Girl and I did find it odd a high school girl would connect to an eighth grader so seamlessly but in the end, it is a middle grade book written perfectly for its audience. I rated it 3.5 stars - I very much enjoyed reading #DeadWednesday - thanks to #NetGalley for giving me the opportunity to preview this sweet story.
Read more
Helpful
Report abuse
See all reviews
Back to top
Get to Know Us
Make Money with Us
Amazon Payment Products
Let Us Help You
EnglishChoose a language for shopping. United StatesChoose a country/region for shopping.
© 1996-2021, Amazon.com, Inc. or its affiliates