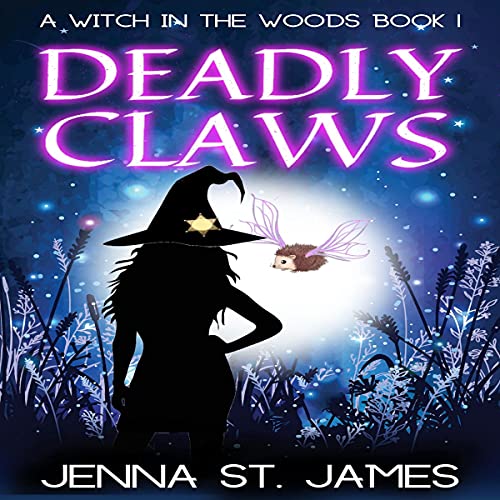 Deadly Claws: A Witch in the Woods, Book 1

A 40-year-old witch with a new career, a gargoyle sheriff raising a teenaged daughter, and an enchanted island full of secrets.

Career-driven witch, Shayla Loci, is about to turn 40 and is ready for a change. When she retires from capturing criminal supernaturals for the government, she figures her days of chasing bad guys are over. Little did she know her new job as the game warden on Enchanted Island would thrust her right back into harm's way...and she wasn't even officially on the clock yet! But when Sheriff Stone enlists her help to find out who killed an island resident, Shayla readily agrees. Between sorting through alibis, gathering clues, and mentoring a wayward teenager on how to be a witch...Shayla's life is hectic. If only her estranged dad - the King - wouldn't insist she take her bodyguard, Needles, with her everywhere she goes. Just when Shayla believes she's identified the killer, a new threat emerges...leaving her to make a snap decision that may cost her her life. This new paranormal cozy series with a twist on midlife discovery will leave you guessing and hungry for more!

Special invitation from Audible!
Learn more about Membership
List Price: $14.95
You Save: $1.87 (13%)
By completing your purchase, you agree to Audible’s Conditions Of Use
Sold and delivered by Audible, an Amazon company

TMac
5.0 out of 5 stars A wonderful new series
Reviewed in the United States on March 26, 2021
Verified Purchase
This is the first book in a spin off series by an amazing author. There are witches, gargoyles, and dead bodies. Who could ask for more??? Then she introduced Needle....I loved this little critter.
This book was wonderfully engaging from start to finish with unpredictable twists and turns.
I enjoyed this book so much that I have the next 2 pre-ordered.
Read more
7 people found this helpful
Helpful
Report abuse

C. F.
5.0 out of 5 stars Short but fun
Reviewed in the United States on June 12, 2022
Verified Purchase
This story really flowed and I admit is a bit unusual considering Shayla's father is basically a tree even though a known magical protector of the forest and island that they live on. I love Gigi and the beginning sparkle of romance with the gargoyle Sheriff. I look forward to spending more time on this sleepy magical island.
Read more
Helpful
Report abuse

Judy Lynn Tissot
5.0 out of 5 stars Loved It !
Reviewed in the United States on September 29, 2021
Verified Purchase
This is my first time reading anything by this author and, she did not disappoint. The characters are quite unique. I mean a flying porccupine. The main character her father is a tree but , he also has control of the forest and island . I can only say give it a try. You will have a few good laughs out of it too. It was a joy to read now I'm going to read the second book.
Read more
Helpful
Report abuse

Akitalady
5.0 out of 5 stars Fun book!
Reviewed in the United States on September 29, 2021
Verified Purchase
This is a really fun story filled with interesting characters. Along with different supermarket like witches. Werewolves and gargoyles there is an enchanted forest. Problems arise between supermarket and normals - those born into magical families who have no magic. I enjoyed reading this. It was a fun read with an intriguing plot.😊
Read more
Helpful
Report abuse

Evelyn
5.0 out of 5 stars Liked it.
Reviewed in the United States on June 14, 2022
Verified Purchase
My kind of book.
Lots of adventures . I enjoy reading of the character and how they come to be.
Looking forward to next book
Thank you
Read more
Helpful
Report abuse

MsDragon
5.0 out of 5 stars Different Kind of Dad!
Reviewed in the United States on November 4, 2021
Verified Purchase
That was a combination I wouldn't have thought of! Definitely a different way of family, but parents and children overcome the difficulties and be happy in their ways.
Read more
Helpful
Report abuse

Jocelyn E. Renner
5.0 out of 5 stars Fantastic start to the series!
Reviewed in the United States on November 28, 2021
Verified Purchase
I just stumbled upon this series and I love the characters, the chemistry, and the story. I’m excited to dive into the next one. Excellent writing.
Read more
Helpful
Report abuse

Kindle Customer
5.0 out of 5 stars Deadly Claws
Reviewed in the United States on June 4, 2021
Verified Purchase
Pretty cool story. A much ass princess with a really bad mouth sidekick. I liked the development of a romance between our heroine and the sheriff. On to the next story.
Read more
Helpful
Report abuse
See all reviews

Sue-Dee Numb
4.0 out of 5 stars Gentle easy read
Reviewed in the United Kingdom on June 14, 2021
Verified Purchase
Shayla Loci returns to live on the Enchanted Islandw where she grew up. The Island is a haven for supernatural beings and their families, all are welcome regardless of abilities and they are protected as the island is not visible to non supernaturals who might hurt that which they don't understand.

Shayla had worked on the mainland with Paranormal Apprehension and Detention Agency but after 15 years was returning home to be with her mum, Gigi and her father. She has been given the job as the Islands wildlife, fish and forest officer
Unfortunately Shayla finds a body mauled by a werewolf, but all is not as it appears. Shayla joins the new Sheriff to investigate. Can they find the killer?

As I said in the title this is a gentle read its a murder mystery i know, but there's nothing here i would be uncomfortable allowing a teen to read. There are red herrings a plenty and a lively background story with Sheriff Stone, his daughter Zoie and Shayla's gran Gigi. There is also the very adorable protector, a small flying porcupine Needles, small I'm body but large in bravery and sass. I think the romance will develop over the coming series. Gigi mentoring the Sheriff's daughter is also going to bring a lot of shenanigans.

Is this series ground-breaking? - No. I suspect i can tell you some of the upcoming background storylines to come (Sheriff Stones ex wife being one)
Is it enjoyable? Yes.
If your looking for a book you can just pick up and put down without having to keep track of a difficult plot then Deadly Claws is that such book.
I do wish the author was a little more inventive with names! Clawson, Wolfe for wolf shifters, Stone for a gargoyles, Elfman for an elf. You get the picture. You could be called Joe Bloggs and still be a great wolf! But this is a minor issue and to be fair probably more my issue than the authors!!

it was only after I finished that i discovered that there are books about the Enchanted Island and the story of Shayla's cousin Serena and her Wolf deputy boyfriend Grant. But not having read these books did not stop my enjoyment at all.
Read more
Report abuse

Kindle Customer Baz
4.0 out of 5 stars Unusual storyline
Reviewed in the United Kingdom on June 16, 2021
Verified Purchase
A good if somewhat unusual storyline, lots of action and magic with twists and turns to keep you turning pages. If witches, gargoyles and shifters and all sorts of paranormal creatures are your thing then this book is for you. Humor a little romance abound in this fun murder mystery unexpectedly good read, and did I mention Needles? he's a flying porcupine bodyguard, I'm not kidding a great read highly recommended, Baz.
Read more
Report abuse

Kindle Customer
5.0 out of 5 stars A lovely cozy paranormal mystery
Reviewed in the United Kingdom on August 10, 2021
Verified Purchase
I really enjoyed reading this book, Shayla Loci is magical , she is a witch as is her mother and grandmother. She teams up with Alex the Sheriff who is a Gargoyle. Normal people are being attacked and the attacker is making them look like they've been attacked by a werewolf. This book had action plus a bit of loveliness in it. I'd give it more than five stars of I could.😁
Read more
Report abuse

Winter
5.0 out of 5 stars Spectacular
Reviewed in the United Kingdom on April 6, 2022
Verified Purchase
Yes a book i love from the get go, she new about magic and she also know how to use it and a fighter, she's not tripping over herself to find out who and what she is. I want to know more about Alex and his ex wife too.
Read more
Report abuse

snowdrop1941
5.0 out of 5 stars An enthralling read
Reviewed in the United Kingdom on March 23, 2021
Verified Purchase
I loved this book with characters who were paranormal beings; including, gargoyles, fairies, witches and werewolves. An enchanted island was the perfect setting for this book. I look forward to reading more of the series.
Read more
Report abuse
See all reviews