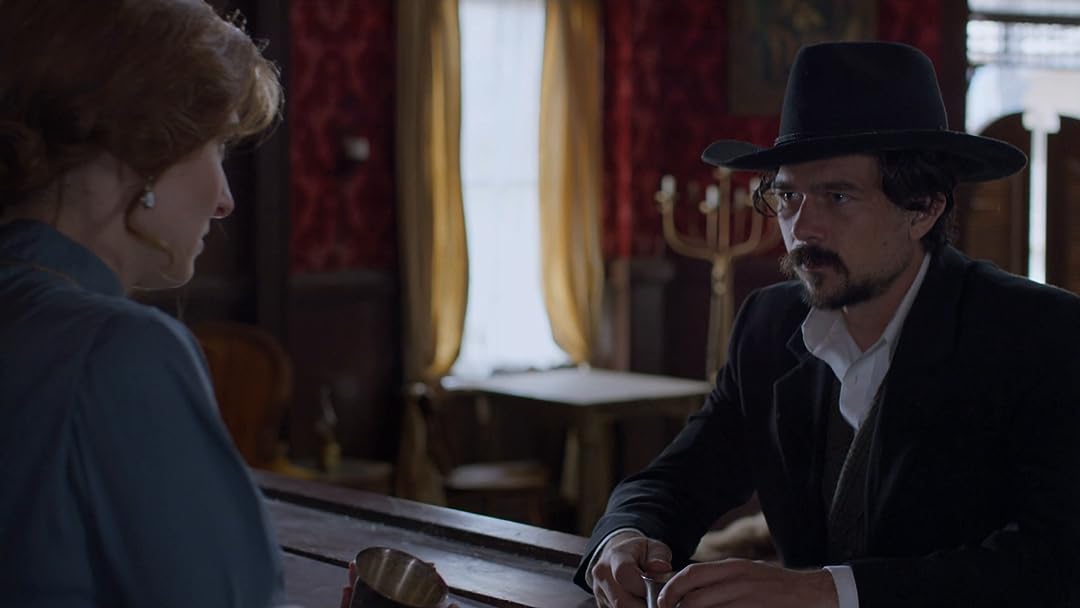 (222)
4.61 h 32 min2018R
Based on the true story of the gunfight at Hyde Park in Kansas. A recently widowered lawman befriends a boy dying of tuberculosis, and Rosie, a madam of the local brothel while their town is being overtaken by a gang of reckless cattlemen.

Cinema BuffReviewed in the United States on December 13, 2018
5.0 out of 5 stars
What a Story Telling and Wonderful Western!
Verified purchase
What a wonderful movie and I love that it is based on a true story. I researched the actual event and the movie is very true to fact. Only a few characters were added like the role of Happy/Sad Jim and a few other. I enjoyed the duality of the Jim character in the story played by Danny Winn who opens in the film and looks so different in the retrospect of the story telling. C Thomas Howell showed one of his best performances and fits the western role wonderfully. Rising stars Luke Arnold and Viva Bianca were great as well. I hope that this director/writer Nicholas Barton will continue to produce more films and stories in this genre.
10 people found this helpful

Martin J. KeenanReviewed in the United States on December 21, 2018
5.0 out of 5 stars
An important and excellent film
Verified purchase
Deadman Standing is about many things: courage, cowardice, the Old West, gunfights, a women's place in the Old West, good vs. evil. But first, this film is based on a true story of a gunfight in Newton, Kansas (Hyde Park) in 1871. The story is largely unknown, but it should be just as well known as the O.K. Corral and others. One of the reasons it is not more well knowns deals with the nature of the major hero in the film. He was not a self-promoter.
I am thrilled that Nicholas Barton took the time to draw America's attention to this undervalued tale in American history--the gunfight at Hyde Park. Bringing light to a new story is better than just making new movies about the same gunfights that Hollywood has done again and again. This is new material.
The cast is excellent, the cinematography is outstanding, the sound is very good and the story is well drawn. The story of the 1871 gunfight is being told by the sultry Rosie (Viva Bianca), a saloon and brothel owner who survived the melee.
Bianca, of course, was featured in the "Spartacus" series on Starz Network. She is a beautiful and clever woman, and Director Barton wisely doesn't rely on her sexual allure to the extent he could have, but instead emphasizes her canny nature and good heart. Bianca is the centerpiece of the film, telling the story of what happened in the Newton, Kansas shootout two years later at her new joint in Medicine Lodge, Kansas.
Rosie tells the story to a stranger who enters her bar randomly, two years after the incident. The Stranger is played by C. Thomas Howell, and he looks and plays the part; sort of a Tommy Lee Jones type of toughness and grit.
As the story is shown in flashbacks, it comes down to a showdown over property and jurisdiction between two lawmen, Mike McCluskie (Luke Arnold), and Billy Bailey (Peter Douglas). When you first see Sheriff McCluskie standing next to the newly-appointed Sheriff, Billy Bailey, one thinks of Rocky Balboa and Ivan Drago. Billy Bailey is a mountain of a man, and appears to be about 6'6" and 250 pounds in the film. Billy Bailey looks like a linebacker for the Chiefs, compared to the smaller, but determined Mike McCluskie.
Meanwhile, a corrupt local Judge, Clarence Potts (Richard Riehle), plays the part of the bought-and-paid-for judge flawlessly. He is sort of a Wilfred Brimsley character.
Throughout the film, with almost each character, I thought: "If this was a Hollywood Blockbuster, this part would be played by Tommy Lee Jones, or Russell Crowe, or whoever." But that's the magic of the film: it not only tells the story of a gunfight that few Americans have heard of, but it gives exposure to an outstanding cast that is undervalued.
Courage is a rare commodity, while cowardice is rampant in life. And this film reminds me that if someone has Courage (or the ancient Virtue of Fortitude), they have a cherished possession. The McCluskie figure and the canny Rosie know courage when they see it.
They give the gift of attention to a boy with tuberculosis, James Riley (Quinn Lord). Rosie and Sheriff McCluskie basically serve as stand-in parents for down-on-his-luck James Riley, because they see something in him.
A stark counterweight to James Riley is the cowardly Hugh Anderson, Jr., (Douglas Bennett) who had every break in life one could imagine, but whose father obviously didn't give him the gift of attention. His father never showed him how to be a man.
There are many messages in the film, but to me, the central message is that if someone has the rare virtue of fortitude, or courage, they are far ahead of any coward on earth, regardless of their station in life. Such people need the gift of attention, because they are rare.
We know the names of great gunfighters in the Old West, in part, because many of them were self-promoters. But sometimes the best gunfighters walk away quietly and without fanfare.

Kera A. HamiltonReviewed in the United States on December 30, 2018
5.0 out of 5 stars
Haunting and Oddly Beautiful!
Verified purchase
This movie is stunning! From the sets to the music and tone, this one will do more than hold your attention. The story is not your run-of-the-mill western, the characters have depth, and the mood created will last long after the credits roll. (For you film buffs, look for the beautiful "passage of time" sequence midway.) An excellent cast of story-tellers. (C. Thomas Howell never fails to captivate.) An excellent story. Go for the DVD. Definitely one for your library!
5 people found this helpful

jaberReviewed in the United States on December 17, 2018
5.0 out of 5 stars
An engaging and realistic view of the old West.
Verified purchase
What I liked best about this movie is how realistic and historically accurate the story is while at the same time it engages your interest and keeps you guessing until the end. The characters are down to earth unlike the overly exaggerated typical Western movie. It was even better the second time because you can catch the meaning of the more subtle narrative in the beginning which relates to the final scene. Excellent acting and a well written and edited story.
2 people found this helpful

DennisReviewed in the United States on December 28, 2018
3.0 out of 5 stars
Good Drama, Not Good History
Verified purchase
The movie opens with the claim "Based on actual events." To be completely honest, it should have read "Based VERY LOOSELY on actual events." Some reviewers claim this movie is realistic and historically accurate. It is neither, and anyone who thinks so has little understanding of Old West history. This movie is not only NOT an accurate depiction of the Old West, it's not even accurate to what occurred at the Hyde Park gunfight. What this movie IS, however, is a cracking good drama that can be enjoyed for exactly what it is -- entertainment, not history.
One person found this helpful

robert crowReviewed in the United States on December 23, 2018
1.0 out of 5 stars
Worst fake Southern accent ever!
Verified purchase
I have such a hard time when Hollywood tries to pull of a Southern accent. That's about when I start noticing things like Plywood being used on the sets and welded steel cattle panels being used in their corrals. I made it through 33 minutes and had to shut it off. Hollywood fails again! I think the other high reviews must be paid reviews. This movie is a stinker from start to finish.
2 people found this helpful

joanie Reviewed in the United States on June 9, 2020
5.0 out of 5 stars
VERY GOOD
Verified purchase
This a good throw back old fashion western that I thoroughly enjoyed. Great plot and outstanding actors.
See all reviews
Back to top
Get to Know Us
Make Money with Us
Amazon Payment Products
Let Us Help You
EnglishChoose a language for shopping. United StatesChoose a country/region for shopping.
© 1996-2022, Amazon.com, Inc. or its affiliates