You've subscribed to Julian Lynes and Ned Mathey series! We will preorder your items within 24 hours of when they become available. When new books are released, we'll charge your default payment method for the lowest price available during the pre-order period.
Update your device or payment method, cancel individual pre-orders or your subscription at
Your Memberships & Subscriptions
There was an error. We were unable to process your subscription due to an error. Please refresh and try again. 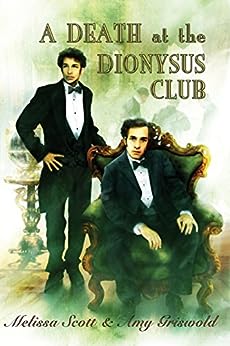 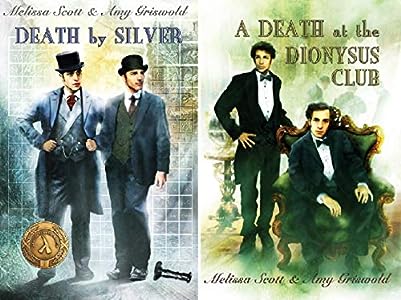 4.7 out of 5 stars
4.7 out of 5
33 global ratings
How are ratings calculated?
To calculate the overall star rating and percentage breakdown by star, we don’t use a simple average. Instead, our system considers things like how recent a review is and if the reviewer bought the item on Amazon. It also analyzes reviews to verify trustworthiness.
Top reviews

RV
5.0 out of 5 stars A beautifully written, imaginative novel that works on all levels
Reviewed in the United States on May 6, 2019
Verified Purchase
In their second novel featuring Julian Lunges and Ned Mathey, Melissa Scott and Amy Griswold conjure magic worth remembering. Unlike the somewhat uninspiring debut novel featuring these Victorian magicians, A Death at the Dionysus Club works at just about every level - and especially in giving the tentative relationship between Ned and Julian a passion that many readers might relate to in its halting, hide and seek, yet ultimately undeniable dynamics. The writing is beautiful - historically detailed and rich without being pedantic, dramatically (and sometimes comically) paced and pitch perfect, evocative and, ultimately, deeply humane. At one point, our metaphysical magicians are revealed as men who love men to the Scotland Yard inspector working with them, who responds by saying:

"Little girls from the country who only wanted a decent place as a scullery maid, and wind up in a bawdy-house being slapped about by the madam and robbed of every sixpence they earn. Boys sleeping ten to a room in the worst kind of lodgings because it’s better than the workhouse, and getting lessons in every indecent act you can do for a shilling. Not that they wouldn’t learn that in the workhouse as well. There’s rape and brutality and ill-treatment I wouldn’t wish on a dog, and we do what we can to stop it. And we might as well try to empty the sea with a spoon."

We encounter this "morality against the odds" several times in this book, always seamlessly integrated into the texture of the story. The authors make us feel what it's like to act on a moral belief rather than rather treating it as a tired literary cliche.

Perhaps the novel's most successful feature is the layered complexity of its magic and the way the authors' inventiveness builds a convincing alternate history. In the London on the novel, magic is as common as an umbrella while still being as potentially dangerous as a natural gas explosion. I found myself earnestly wanting to know more about the metaphysical Law of Similitudes, and wanting to get lost in an imaginative reverie of sigils and hooks and non-confirming magic. I think you will too. Unlike my review of the first book in this series, I HIGHLY recommend A Death at the Dionysus Club. It's an absolute jewel.
Read more
Helpful
Report abuse

Ulysses Grant Dietz
4.0 out of 5 stars Subtle and carefully crafted, a rich and believable tale of magic and social mores.
Reviewed in the United States on December 11, 2014
Verified Purchase
A Death at the Dionysus Club

By Melissa Scott and Amy Griswold

Ned Mathey and Julian Lynes are old school chums. They also might be in love with each other. The emotional bass line of this beautifully crafted novel is how these two men, without any support from the society around them, negotiate creating a life together. What I love most about this book is the fact that this crucial theme is rarely the overt focus of the story. It is ever-present, but delicately interwoven into the complex action that pretends to be the main point. This is Holmes and Watson with a gay back-story where the backstory is, ultimately, more important.

Period novels always make me nervous. I’m too deeply immersed in the 19th century professionally (museum curator), and have read too much Victorian literature not to be aware of writing styles and anachronisms. I was well into “A Death at the Dionysus Club” when I realized that Mesdames Scott and Griswold had managed to write another novel that didn’t push any of these buttons to spoil my simple reading pleasure.

The second piece of tremendous bravado is the fact that the authors have created a believable, vivid late Victorian London in which magic—normalized into practical parlance by the term metaphysics—is as much a part of everyday life as, say, technology is today. Without making a big fuss about it, Scott and Griswold have created a false reality that rings true, even to dividing the magical into trained and amateur, and within the profession into theoretical (metaphysicists) and practicing (metaphysicians). It is all done so matter-of-factly that it barely distracts from the building of the narrative and the characters. (I can’t help but compare this with J.K. Rowling’s fevered depiction of the separate Muggle and Magical worlds in her much-loved Harry Potter books.)

This second in the Lynes/Mathey series is richer and deeper than the first. It delights less in the presence and appearance of magic (at least until the end, which is pretty hair-raising) and focuses on the lives of two gay men in Victorian London, as they work together and try to establish the boundaries of their relationship in the context of a virulently anti-homosexual world. The painful realities of living as sodomites (their word!) is more significant, ultimately, than the use and abuse of metaphysics by the citizens, high and low, of a great metropolis.

But it is magic, in the end, that casts a brilliant, painful spotlight on what Ned and Julian mean to each other, and the discreet, low-key way in which the authors make this clear touched me deeply. Because it felt right. It felt true.

This was a deeply satisfying book to read. I look forward to seeing where Scott and Griswold will take Ned and Julian next.
Read more
6 people found this helpful
Helpful
Report abuse