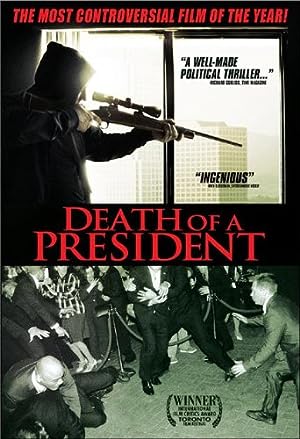 Death of a President

(84)6.31 h 36 min2007R
Death of a President is conceived as a fictional TV documentary broadcast in 2008, reflecting on a monstrous and cataclysmic event: the assassination of President George W. Bush on October 19th, 2007.

GrinderCBReviewed in the United States on April 30, 2016
4.0 out of 5 stars
Fascinating Fake-umentary
Verified purchase
First, I liked the movie, thought it was pretty well made, using grainy, shaky-cam photography combined with actual stock footage and "Forrest Gump effects" to look like an actual documentary covering the assassination of a President. Not sure what the director's message was but it appears to be some kind of narrative about Americans' rushing to judgement before all the facts are in.

Fake-umentary about someone assassinating President George W. Bush after a speaking engagement. Suspects include a radical protestor known to hate the US government, a former army soldier back from Afghanistan and Iraq and disgruntled at not being able to get help from the VA, and a Syrian immigrant with ties to Al Qaeda and the Syrian army. Despite only circumstantial evidence the Justice Dept railroads the Syrian even though there is no physical evidence linking him to the shooting, no fingerprints on a rifle found at the scene, no contacts with known Al Qaeda suspects in the US, etc. In all, its a fascinating look at how current events and political thought combined with how our news media behaves might influence an assassination. After all, the last one was in 1963 and a lot has changed since then.

Jason GalbraithReviewed in the United States on May 7, 2015
4.0 out of 5 stars
SPOILER ALERT: This review reveals the ending of the movie.
Verified purchase
I purchased "Death of a President" because I had also seen "The Interview." "Death" is the only other movie made this century about the assassination of a sitting (as George Bush was in 2006, when the movie was made) head of state, but it could not be more different from "The Interview." "The Interview" is a comedy while "Death" is very dramatic. More importantly, however, in "The Interview" things get decisively better for the people of North Korea after their head of state is killed, whereas in "Death" things get marginally worse for the American people (and decisively worse for the patsy selected as villain of the year). The real killer shot himself just after killing Bush, leaving a suicide note implying his responsibility for the assassination, but it's more convenient to President Cheney to blame a Syrian immigrant who was tricked into coming to an Afghan al-Qaeda camp years earlier, who is sentenced to die for the crime.

The real message of this film is that violence as a means of transforming a society never works. There is relatively little known about the actual killer -- we see only old photographs of him in uniform, a picture of his body after he has shot himself, and discussion of his life by his wife and son -- but it is implied that he killed Bush out of a similar misguided idealism that led Bush to invade Iraq. Ubiquitous protestors throughout the first part of the movie are making this point and their activism, the film hints, itself slides into unacceptable violence, even though the real killer is not part of any protest group. This and the assassination only inspires the state to pass new amendments to the Patriot Act that take away more of our freedoms, leaving everybody worse off.

The Secret Service has now gone 52 years since the last successful Presidential assassination and you wonder if it might be getting complacent. This will probably be even more true the more time elapses until someone else makes a serious try. I prayed last night after watching this movie that we would never see another President of the United States assassinated. The outcome would be bad for everybody, no matter who it is.
4 people found this helpful

Roberta LoughReviewed in the United States on January 1, 2021
1.0 out of 5 stars
Did not come through. Please cancel.
Verified purchase
This did not appear on my t.v. Please cancel.

Steve BartoReviewed in the United States on October 20, 2019
4.0 out of 5 stars
We must always keep bias, hatred, and emotion at bay.
Verified purchase
The editing and cinematography made this film a success. Very clever "faux' documentary that makes an important social statement. Never should we let bias, preconception, prejudice or emotion make our decisions for us.

.Olatunji MwambaReviewed in the United States on April 2, 2007
5.0 out of 5 stars
Wake America !!!! This could happen .
Verified purchase
I saw this movie when it was released, back in October of 2006 . It was only in limited release. I wonder why ? Because they know it would compell many of us to begin to think. If only the Citizenry would do more studying of the Constitution of the united States, as well as, analyze the criminality of what has and continues to transpire within the government of the United States ( whether Republican or Democrat ) , and why the government no longer works for, by or is of the people. How many people have truly studied " THE USA PATRIOT ACT " and other corresponding legislation and their statutory provisions and compared them with the rights that have been secured by Constitution, as well as what " The Federalist Papers " says in regards to our human and Constitutional rights ? And why we must be viligant, in safeguarding our rights. Who are our elected representatives and the President, ETAL listening to ? Most assuredly, it isn't us. This movie should give pause to everyone who blindly follows these people and foolishly thinks our government still obeys the Constitution and the laws of the United States, which shall be made in pursuance thereof. We no longer live in a Republic, we now are ruled by an " Oligarchy " and a " Plutocracy ". Wake up, America before it's too late. If you haven't seen " Death of a President ", see it, immediately. Open up your mind. Think!!! If I could, I'd give this movie ten stars. Five stars, for sure.
11 people found this helpful

PaulReviewed in the United States on April 29, 2016
4.0 out of 5 stars
This movie works best as a faux documentary
Verified purchase
The movie is billed as a mystery on Amazon. As a mystery it doesn't really work: its not a rivetting whodunit. The movie works because it is a mostly accurate depiction of how the assassination of a President would be covered. The movie provides social and political commentary, but in a way that feels organic to the story and not heavy handed.
One person found this helpful

Scott E. MillerReviewed in the United States on November 23, 2007
5.0 out of 5 stars
Brilliant and Utterly Fascinating
Verified purchase
This is one of those movies so brilliant in its conception, so smart and skillful in its execution (pardon the pun), and so disturbing in its implications that any intelligent American who isn't bogged down in political ideology should take a look at it... This is not a film that bashes Bush -- it's a piece of art that contemplates the hyper-violent society we live in and the implications of the angry, increasingly gun-obsessed nation we've become. Remember, folks, ideas aren't dangerous -- only people are -- so give this a chance.
5 people found this helpful

Frank ProvasekReviewed in the United States on May 16, 2007
5.0 out of 5 stars
Amazon was my only chance to view this
Verified purchase
A thought-provoking movie everyone should see. I am in Texas, and the local theater chains would not show it, the local DVD rental stores would not rent it, and the local Walmarts and Targets would not sell it. The fact that a serious award-winning movie is made unavailable to me, based on Fox "News" and hate-radio smear campaigns by people who never saw it, falls right in line with the "Patriot Act 3" tone of this film.
6 people found this helpful
See all reviews
Back to top
Get to Know Us
Make Money with Us
Amazon Payment Products
Let Us Help You
EnglishChoose a language for shopping. United StatesChoose a country/region for shopping.
© 1996-2021, Amazon.com, Inc. or its affiliates