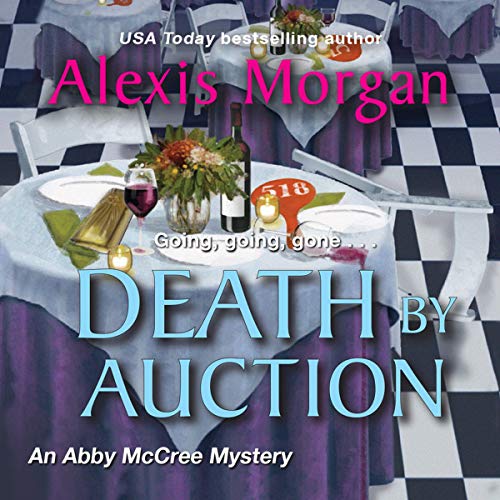 It's hard to say no to Tripp Blackston. That's how Abby found herself on yet another committee, organizing a bachelors' auction to raise money for Tripp's veterans' group. The former Special Forces soldier is mortified when Abby enlists him to be one of the prizes, but she has a covert plan to bid on him herself. Before she can, she's foiled by a sniper bid from a gorgeous stranger, who turns out to be Tripp's ex-wife Valerie.

Still reeling from the shock that Tripp was married and wondering what his ex is suddenly doing in town, Abby goes looking to pay the auction's emcee, radio-personality Bryce Cadigan. She finds him in the parking lot, dead in his car. Valerie appears to be the last one to have seen Bryce alive, so she's the cops' best bid for suspect. When she asks Tripp for help - and lodgings - it's Abby's turn to block by inviting Val to stay with her. But did she just open her home to a murderer?

Special invitation from Audible!
Learn more about Membership
List Price: $34.99
You Save: $4.37 (12%)
By completing your purchase, you agree to Audible’s Conditions Of Use
Sold and delivered by Audible, an Amazon company

Amazon Customer
5.0 out of 5 stars Death by Auction
Reviewed in the United States on January 30, 2021
Dollycas’s ThoughtsAbby McCree’s new project is organizing a fundraiser for Tripp Blackston’s veteran’s group. She has planned a bachelors’ auction to followed by a dinner event 2 weeks later. It took a bit of convincing but Tripp will be one of the bachelors up for auction and Abby hopes to win with her bid. Her plan goes awry when a beautiful woman takes the prize with a astounding bid of her own. Afterward, she learns the woman is Tripp’s ex-wife Valerie. Say What!?Okay, Tripp has some explaining to do but she needs to focus on her event. She needs to pay the emcee, Bryce Cadigan, a radio personality that grew up in Snowberry Creek. He has been spending time catching up with people he knows and the last time she saw him he was going outside with Tripp’s ex. She is back glued to Tripp’s side but Bryce is nowhere to be found. She heads to the parking lot hoping he hasn’t left without his check. She finds him in his car and he is going anywhere. He is dead and she has to tell the police she saw him go outside with Valerie. Is Tripp’s ex-wife a killer? Valerie begs Tripp for help and a place to stay now that she can’t leave town. His place is too small for overnight guests so he asks Abby “his landlord” to put Valerie up in one of her guest rooms while they try to track down the real killer. The scary thing is the real killer may be the person moving into her house.Abby is much more comfortable in Snowberry Creek as she has gotten to know more and more people. Most were friends of her now-deceased aunt but she is finding her place in town in her own right. This time she meets some of Tripp’s military friends as she is working on a veteran’s fundraiser. They come in handy as she tries to find out who killed Bryce Cadigan. Her budding romance with Tripp hits a bump or two with his ex in town. Her friendship with Chief of Police Gage Logan gets stretched as she keeps butting into his case. Jean, Louise, and Glenda, friends of her Aunt Sybil are still pushing and shoving Abby around but she has learned how to deal with them. Jean’s infatuation with Tripp has tamed a bit, again, the ex, but she still is baking him her “famous tuna casseroles. And of course, the lovable mastiff Zeke is around to steal our hearts. I really am a fan of the way these characters continue to evolve. We learn new things about them in every book and I get further invested in their lives as this series continues.Ms. Morgan has crafted another strong mystery with several suspects. Abby had to really dig deep to find all the connections and press people to reveal secrets or remember past events that would give people reasons to kill off Bryce. Her sleuthing took her to some interesting places. I had a great time following along with her. I had winnowed my list down to two as we headed into the home stretch.Again the author focuses on helping veterans. I love that the theme continues from the last book which shows it is an important cause for her.Death by Auction is another great addition to this series. I loved the abundance of humor included throughout the story. I had planned on reading this book when it came out but my breast cancer treatments were wreaking hell in my life last May. Now I am ready for book number 4 Death by Intermission.
Images in this review

GameGal
5.0 out of 5 stars An auction, an Ex, a death & some laughs-fantastic cozy mystery!
Reviewed in the United States on January 26, 2022
Verified Purchase
I love the Abby McCrea series by Alexis Morgan and Death By Auction is one of the best cozy mysteries I have read lately! Abby organizes events and has an Auction and Dance combination to benefit Tripp's Veterans group. At the Auction, the veterans, including Tripp and Gage, are bid on as escorts for the dance. Abby was all set to bid on Tripp when a beautiful lady wins the bid at the last minute and it turns out to be Valerie, Tripp's ex-wife. Abby didn't even know he had been married. Then the Emcee, Bryce Cadigan, ends up dead. Valerie is the prime suspect. It is funny when Abby refers to Valerie as The Barnicle! It added a lot of humor to the book. Tripp and Abby work together along with their friend Gage, who is the local Police Chief, to solve the case. I surprisingly guessed the culprit but wasn't sure until the end. There is enough going on with the case, the suspects, Valerie, Tripp and Abby that I couldn't put the book down! This book has everything I love about cozy mysteries- characters who are likable and realistic, a good cozy mystery, humor and a little romance. Very enjoyable!
Read more
Helpful
Report abuse

KJ
5.0 out of 5 stars Cozy mystery, indeed
Reviewed in the United States on July 27, 2020
Verified Purchase
This series really is like curling up with a blanket and a hot beverage on a rainy day. I don't read many "cozy mysteries", but I'm a long-time fan of some of Alexis Morgan's other works, so had to give this series a try. I love them all, can hardly stand the wait between books! And I love the tie-in with her earlier Snowberry Creek books. I'm really happy these are now available on audiobook, too -- so yeah, I ended up buying both kindle and audiobook versions, and definitely will be re-reading/re-listening to these!
Read more
3 people found this helpful
Helpful
Report abuse

Deborah M Almada
5.0 out of 5 stars A very exciting auction
Reviewed in the United States on June 21, 2020
Verified Purchase
Love this series! I enjoy Abby, the way she gets pressured into committees, the small town vibe, all the great secondary characters and especially Zeke! In this book Abby is blindsided at a charity auction she set up for a local veterans group when her neighbor and tenant Tripp is bought at the last minute by an ex-wife Abby didn't know he had. When the emcee for the event is murdered and Tripp's ex is arrested, what's a girl to do.
Read more
2 people found this helpful
Helpful
Report abuse

LGK
5.0 out of 5 stars Very good series
Reviewed in the United States on May 28, 2020
Verified Purchase
I’ve thoroughly enjoyed all 3 of the books in this series. I’m sorry I didn’t find this series sooner. I’ll be looking into this writer’s other books. I highly recommend this series.
Read more
2 people found this helpful
Helpful
Report abuse

Shirley Pumfrey
5.0 out of 5 stars Very good
Reviewed in the United States on February 4, 2021
Verified Purchase
Wonderful book. So entertaining. Love all the characters.
The plot was so different. Sorry I finished it. Looking forward to more of hers.

Eugenia Clements
5.0 out of 5 stars Auction
Reviewed in the United States on May 28, 2020
Verified Purchase
I am thoroughly enjoying this series. The main characters are all so well-described and likable, I would love to be friends with each one. I’ve already pre-ordered the next one in the series.
Read more
One person found this helpful
Helpful
Report abuse

Terry
5.0 out of 5 stars good read
Reviewed in the United States on June 11, 2020
Verified Purchase
I have read all 3 books in this series. After the first, I couldn't wait for the next one. And then, I ordered the 3rd one and waited for it to be published. Fun and well written!
Read more
2 people found this helpful
Helpful
Report abuse

j doyle
5.0 out of 5 stars Spell binding
Reviewed in the United States on May 30, 2020
Verified Purchase
Alexis Morgan has a knack for drawing you in thinking one thing then surprising you with a twist at the end. Looking forward to her next book
.
Read more
One person found this helpful
Helpful
Report abuse
See all reviews

Amazon Customer
5.0 out of 5 stars Excellent Series
Reviewed in Canada on July 17, 2020
Verified Purchase
A great series in the cozy mystery line! Can't wait for the next one. Colourful well written characters and good plots.
Read more
Report abuse
See all reviews