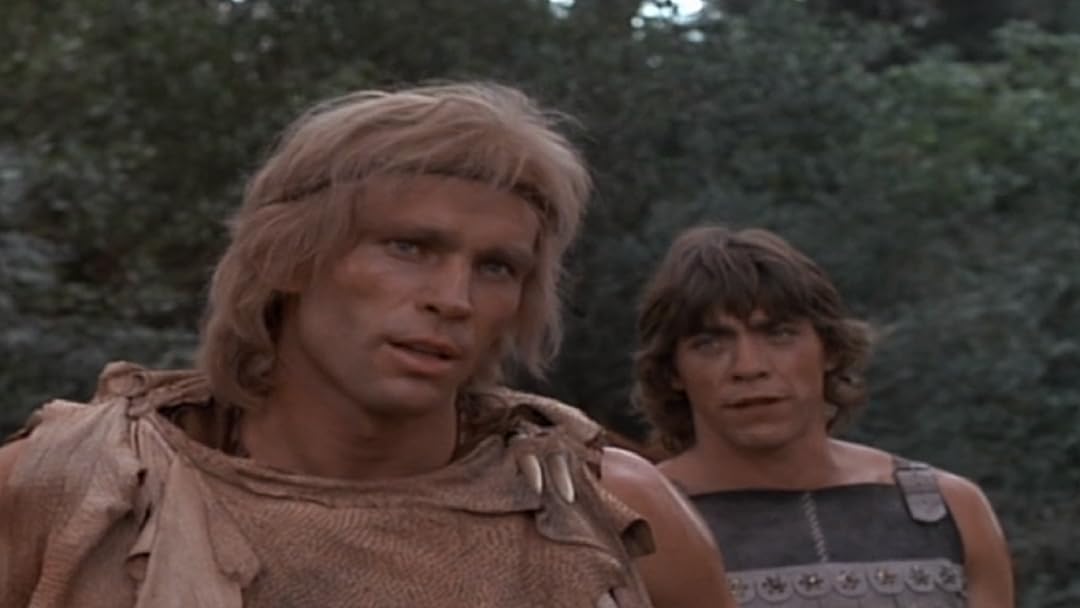 (176)
1 h 16 min1983R
The legendary outlaw Deathstalker is called upon to help save his kingdom from the evil wizard Munkar in this sword and sorcery cult classic.

DGGReviewed in the United States on September 27, 2018
3.0 out of 5 stars
Cheesy Swords and Sorcerer Movie
Verified purchase
So I watched this movie again after many years since I last saw it. I remember seeing this movie back in the early 80s when numerous such movies (like Conan this same year) were being released. Some like Conan were made well and some were low budget like this one. They were all the same story of a massive warrior taking something from the master sorcerer or rescuing a King's daughter from him. This one sat sort of in the middle of the quality range of these B movies. In this one the hero is a bit more self serving but still the general good guy. His sidekicks end up being another warrior female and a older thief like character (sound familiar?).

The music in this one is pretty awful and will hit nerves you didn't know you had till you hear this stuff. The acting is bad from everyone except the head bad guy. (Speaking of him, watch his tatoo change sides during the movie.) You'll also see some female actresses who were B movie Staples in their day like Lana Clarkson (shot and killed by Phil Spector in 2003) and Barbie Benton (Hugh Heffners one-time girlfriend and Playboy model). Lots of female nudity and rape scenes so not a movie for the young ones. This is definitely a man's movie as there's a lot women would likely find offensive.

This is a low budget movie and you can really tell when it came to special effects . The fight scenes both with and without weapons weren't very good. But somehow, this movie is still entertaining.

While it wasn't anything I can recommend, it has it's place in movie history and nostalgia for B sword and sorcerer movies.

Russ AtwoodReviewed in the United States on July 29, 2018
3.0 out of 5 stars
Inexpensive Wardrobe Costs
Verified purchase
This is definitely a man's movie. The story is weak, most of the actors should go to acting school, and the sword fights were too mechanical. However, there was a lot of action, and the glue that held it all together was a lot of T & A. Barbie Benton was gorgeous in her skimpy outfits, and other nameless young ladies seemed very proud to display their "pre-saline era" natural breasts. Obviously a B movie but worth the watch.
14 people found this helpful

Amazon CustomerReviewed in the United States on July 17, 2020
3.0 out of 5 stars
Sometimes you need some 80's B-movie mindlessness like this one.
Verified purchase
Roger Corman's studio sure knew how to cash in on a trend. He gave us "Battle Beyond the Stars", which rivals "Starcrash" as one of the most entertaining "Star Wars" imitators. "Screwballs" was a "Porky's" ripoff that was in some ways better than the movie it was ripping off. And then there's was "Deathstalker", actually the first of many sword and sorcery films his company made in the wake of "Conan the Barbarian". Just a bit of trivia, a lot of them where shot in Argentina and most of the extras where locals.

The movie is 80's B-Movie fare, the type of film that tailor made for drive-ins. You got your musclebound hero (the tag line for the poster said "The Last of the Great Warrior Kings", yet not once is it mentioned he was a king). You have your evil wizard villain. There's a princess in need of recuing (played by the beautiful Barbie Benton), but our hero also has a sexy blonde swordswoman (played by the beautiful Lana Clarkson, whose character seems to die from a mere scratch, unless the sword was dipped in poison) to fight by his side . Add a tournament, a pig man (possibly inspired by the Gund from "Return of the Jedi") plenty of bloody deaths, and bare female flesh and you have the type of movie that only the 80's could produce. This has to be the only movie I've seen where someone gets clubbed to death by his own severed arm. If that's not mindless entertainment, I don't know what is.
3 people found this helpful

There's two way to look at this movie: There's the "titillation" factor (and I do mean "titillation") to bring out the high school hormones... Which I fully understand.

And then there's the, eh-gawd this is terrible... terrible dialog, terrible editing, terrible sets, terrible camera work, terrible direction... It's pretty terrible. Halfway through I thought, a high school cinema class would have less jumps in the editing. The story jumps around and is not fully explained, but just go with it...
If you like MST3K movies, you'll be able to provide your own sound track. In fact, it's likely that the only reason MST3K hasn't Riffed this is because of the boob count... I lost track.

Finally, Barbi Benton is a darling. It's easy to see why Hef' married her. There's a ton of other eye candy including a young, hot Lana Clarkson. Apparently, Rick Hill wore a wig for that long flowing blond hair! So have a couple of beers or a BIG class of wine and enjoy!
One person found this helpful

Andrew "Big Ugly' HaleReviewed in the United States on January 20, 2019
3.0 out of 5 stars
Dark, maybe silly.
Verified purchase
I was entertained but not impressed. I felt the nostalgia from having seen it as a kid (shameful, I know) but probably won't be inclined to view it again any time soon. The movie immediately is dark and gritty but when our "hero" first sets out for the sword it was a spaghetti western. Immwdiately though, you can't quite follow the feel as to whether it is serious or silly.

Too much T&A to be serious, too many grotesque deaths to be silly. Can our "hero" really be a rapist and honorable? Nah. The fight between friends who were enemies before they met seemed like an original concept that was sad to see but very memorable.

I'm surprised so many women wanted to be a part of this but it goes to show you that sex sells and anyone can be a pervert.
3 people found this helpful

westiclesReviewed in the United States on July 31, 2018
4.0 out of 5 stars
Pure 80s cheese!
Verified purchase
I remember this being a staple in every video store in the 80s, but I guess through the years I forgot it ever existed until now. So, 30 years later I finally watched it. Let me tell you, it's bad! But in a good way. The dialogue and acting is horrendous, but entertaining. The fight scenes are absurd. Hell, the gratuitous nudity is the only saving grace!
9 people found this helpful

Kindle CustomerReviewed in the United States on February 10, 2021
2.0 out of 5 stars
Oh, so bad
Verified purchase
This is such a bad film - when you spend more than half of the movie fast-forwarding past the bad acting, then you know you have a stinker. This came across as a way for the director to put a bunch of naked women and rape into a movie about a warrior trying to find 'Artifacts of Power'.
I do not use the word 'rape' lightly either. This is such an exploitive film that completely makes all women in it nothing but sex toys. Even the one warrior woman is a play-thing for our hero, which is sad as her fighting is under-whelming.
I enjoy a good cheesy movie every now and again, and this is NOT a good cheesy movie. I feel that I wasted brain cells and time on this. Thank goodness for double speed and fast forward.

Greg SchaeferReviewed in the United States on September 7, 2018
3.0 out of 5 stars
Definitely not Conan
Verified purchase
A cheesy barbarian 80's flick that is worth a watch but not a gem. I did notice a goof. The dudes tattoo on his head switches. In one scene I noticed it was on the right side but then the next time we see him it magically goes back to the left. The women were beautiful and Barbi Benton was no exception. It has weak sword fights and for the most part the characters are pretty boring but it isn't a complete waste of a flick.
5 people found this helpful
See all reviews
Back to top
Get to Know Us
Make Money with Us
Amazon Payment Products
Let Us Help You
EnglishChoose a language for shopping. United StatesChoose a country/region for shopping.
© 1996-2021, Amazon.com, Inc. or its affiliates