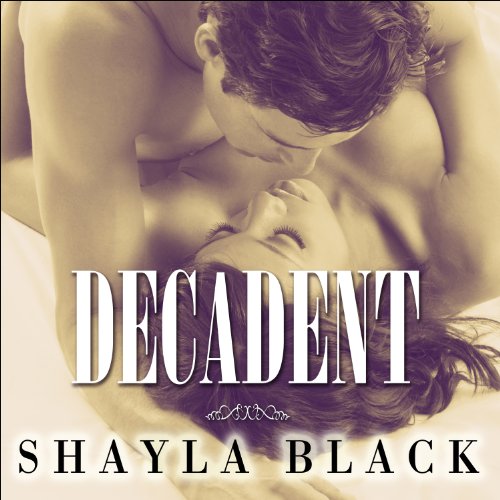 How can a virgin seeking happily ever after with a hot pop star who has a penchant for threesomes win her fantasy man? Kimber Edgington desperately needs a plan to convince Jesse McCall, who's been her friend and secret crush since they spent a summer together as teenagers, that they are meant for each other. But all the tabloid stories about his sexual escapades make her feel oh so inadequate.

Determined to prove she's woman enough for Jesse, Kimber turns to bodyguard Deke Trenton for sexual education. Bold and brash, Deke warns Kimber that playing with him is playing with fire. But he can't bear to imagine the innocent beauty in someone else's arms. So Deke and his super sexy cousin, Luc, take Kimber under their wings and dangerously close to the edge of ecstasy. Though she's saved herself for Jesse, Kimber soon learns he's not the man adept at stroking her aching, endless need. That's Deke, and he can't resist when Kimber begs for more-and more.

Your audiobook is waiting!
Learn more about membership
List Price: $31.49
You Save: $4.54 (14%)
By completing your purchase, you agree to Audible’s Conditions Of Use
Sold and delivered by Audible, an Amazon company

First book of this series was about Jack and Morgan. Fantastic read and wow wee hot. Loved it.

This book follows Deke, Jack's partner who needless to say, makes quite the impression.

Usually, I've noticed that when authors find a storyline that works, they kinda go with a similar flow you recognize. Shayla Black doesn't.

Lots of hot sex of course, but the story is a new one. Not going to tell you and ruin the ride so you NEED to read this book. Loved it and loved the ending.

On to the next book #3. Stay tuned
Read more
2 people found this helpful
Helpful
Report abuse

PCox
5.0 out of 5 stars This one's a riot !
Reviewed in the United States on August 11, 2013
Verified Purchase
in the beginning: we have the female lead, Kimber, going to the house of Deke Trenton, one of the male leads and definitely an alpha male, to ask a "favor". She encounters Luc , Deke's cousin and drop dead gorgeous famous chef, but not to be sidetracked she keeps focus on her mission. Couple of pages later Deke arrives to find Kimber in his house asking her favor -" Will you teach me about sex your way?" Now picture yourself in this situation. Having a bit of trouble with that? I thought so. It just gets better from here on. The plot picks up quickly and really starts to fly. Oh did I forget to mention Deke and Luc share their women? So get your hands on this book or be really smart & put it in your e reader. I'm not my way to the next book in the " A Wicked Lovers Novel" series. Talk later
Read more
Helpful
Report abuse

Marge64
5.0 out of 5 stars Wicked lovers decadent
Reviewed in the United States on January 26, 2022
Verified Purchase
This series is absolutely wonderful. You don't want it to end. Truly amazing. I am hooked on this series. I know I will read them over and over again.
Read more
Helpful
Report abuse

Amazon Customer
5.0 out of 5 stars Shayla doesn't disappoint
Reviewed in the United States on March 24, 2022
Verified Purchase
Wow the lady can write! From edge of your seat action to amazing sex scenes, you will not be able to put this book down.
Read more
Helpful
Report abuse

Mel M
5.0 out of 5 stars Menage Anyone?
Reviewed in the United States on February 9, 2017
Verified Purchase
Deke and Luc have always shared women. Kimber wants to learn about being part of a menage. She goes to Deke to ask him to teach her knowing that even though she's had a crush on him since she was 17, he always avoided her like the plague. Can it work even though Deke and Luc harbor dark secrets and Kimber is saving herself for another?
Lots of steamy, passionate sex, intrigue, mystery and some conflict make this a great read.
Read more
Helpful
Report abuse

Amber Bento
5.0 out of 5 stars BEST BOOK IN SERIES!
Reviewed in the United States on September 21, 2012
Verified Purchase
Shayla Black does it again! This is my favorite book in the series. What women wouldn't want two strong, smart, sexually experienced men in bed with her? This book brought menage to whole new experience! If you like reading erotica you will LOVE this book. The only thing is that it's a little unrealistic but that is why its called Fiction right? Jesse's charterer could have been more convincing and a little better written but all in all I absolutely loved this book!

EAlfaro
5.0 out of 5 stars Decadent
Reviewed in the United States on July 28, 2019
Verified Purchase
This books sends you through every emotion from anger to joy, from hate to love, from frustrated to satisfied, and fake to real. Great read. Looking forward to book 3 in the series.
Read more
Helpful
Report abuse

M. Bowery
5.0 out of 5 stars Great follow-up to Jack's story
Reviewed in the United States on October 22, 2012
Verified Purchase
I really loved the first book in this series. I was a little put off by some of the other reviews to this book but I love Shayla Black's work and couldn't NOT read this one too. I really enjoyed the dynamic between the 3 characters but it just "felt right" when the story came around to its ending. I love the way the relationships unfolded and I can't wait to see what comes next!
Read more
One person found this helpful
Helpful
Report abuse
See all reviews

LeeB21
5.0 out of 5 stars Amazing
Reviewed in the United Kingdom on January 17, 2013
Verified Purchase
This book is amazing! It explains everything about the main characters! I couldn't put it down! Shayla Black is an amazing author, she is another one of my favourite authors!
Read more
Report abuse

donna
5.0 out of 5 stars great book
Reviewed in the United Kingdom on October 31, 2012
Verified Purchase
This book is a must have,its exciting and a great read,I thoughly enjoyed it.I'm looking to read more of shayla blacks novels.
Read more
Report abuse

Bunty
3.0 out of 5 stars Plot was a bit weak
Reviewed in the United Kingdom on November 3, 2017
Verified Purchase
Took a bit of plodding through to feel engaged with the plot.
Just as it was getting interesting the end came.
Read more
Report abuse