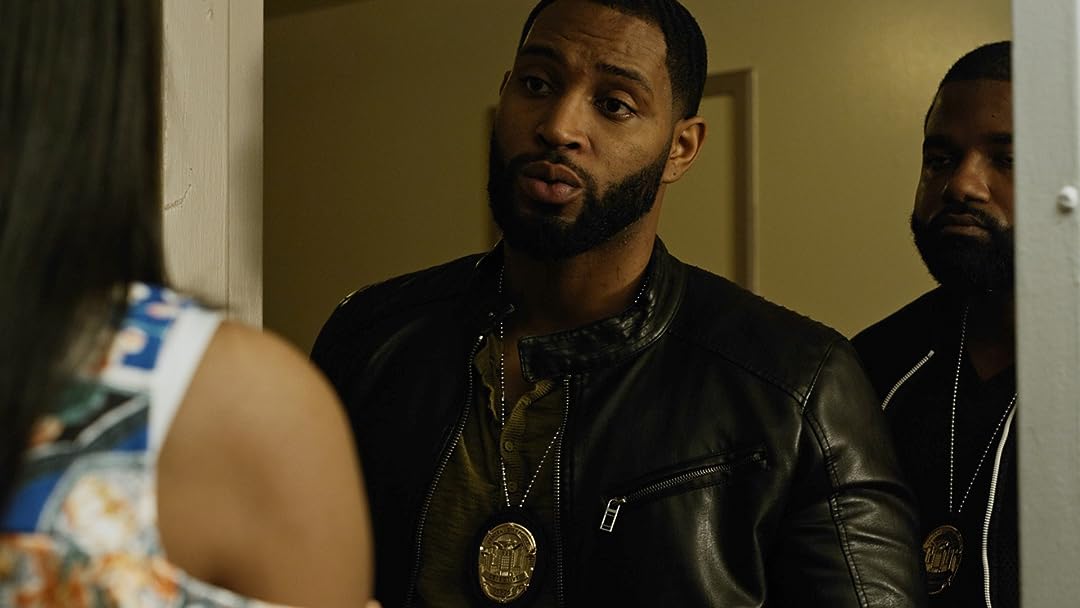 ShabatesReviewed in the United States on May 18, 2020
1.0 out of 5 stars
DISAPPOINTED
Verified purchase
I'm so sorry to say this movie was HORRIBLE!
the ACTING: NOT GOOD AT ALL!!!
the PLOT: even worse than the acting I hated the way this movie depicted the lives of black people and the mentality of women!! I went away thinking Black women have no covering from black men and they do not respect the sanctity of MARRIAGE or the respect of other women
the Language: ATROCIOUS!!
This movie is so bad it really does not rate a star at all..... Very disappointed

Dpa0620Reviewed in the United States on June 8, 2020
1.0 out of 5 stars
This movie...
Verified purchase
This movie is an interesting 2 hours spent. First of all I did not like the script and the immediate reference to women as bitches and hos in the first 10 minutes. The acting was terrible. The cinematography was so bad. The immediate cuts from scenes-no fade or anything. This entire movie was trash. I didn't stop watching because I wanted to see how it would end, so it does have a suspenseful factor to it.
8 people found this helpful

Kimberly Kayy Kimtastic KreationsReviewed in the United States on May 20, 2020
4.0 out of 5 stars
Twist & Turns good Movie!
Verified purchase
This is a very interesting movie with many twist and turns I really like this movie and also it represents my city Detroit, I didn’t like what happened to Camille but I like how she’s turned to church to save her self.. I don’t like how she still got killed.. Especially after how she lost her baby.. I also don’t like at the end of the movie how Britney never really knew who killed V..
Some people speak on this movie Saying they don’t like how it represents black people.. but honestly this movie does represent how some black neighborhoods are, and how some black people are really living and also it shows when you play with fire you damn sure will get burned!!

Now funny part from the movie please explain to me why Camille saw her friend, gets up to go to the bathroom just to get her ass beat. 🤣
Also if anyone knows Camille social media let me know because I want to follow her...
this an honest review!!
2 people found this helpful

Fawn PerryReviewed in the United States on July 8, 2020
1.0 out of 5 stars
This Ain't It
Verified purchase
I couldn't watch another minute after the first 30 minutes and I'm shocked at the number of positive reviews glorifying this mentality. I struggled after 20 minutes. I found the plot unrealistic yet typical of a D movie.

I'm all for supporting Black, low-budget movies. However, the plot only contributes to the negative stereotyping of Black men and women. It highlights dysfunction and a toxic relationship dynamic. I would have been okay with watching a corny love story over this terribly executed storyline riddled with disrespect and abuse, endorsing the notion that the Black woman as Malcolm X described, is the most unprotected, most disrespected, and most neglected person in America.

This movie ain't it...
4 people found this helpful

ReviewerReviewed in the United States on June 22, 2020
1.0 out of 5 stars
What an award winning pos
Verified purchase
Did what's-his-name hire & actually use PAID actors?
Geez, I'm so sick of choosing films, if this could even be considered a film, based on 80-something "5-star" reviews, only to realize they're all posted by cast members, people who may have worked on, or were affiliated with the pos, or THE RELATIVES AND "POSY" of those in question.

This is/was, by far, just another example of why our country is perfectly capable of getting their digs into black America.
No one wants to watch this stereotypical TRASH!!
Shame on the writer/producer/director. Have you learned NOTHING??
5 people found this helpful

Corey smithReviewed in the United States on July 31, 2020
1.0 out of 5 stars
1 of the worst movies ever!!!
Verified purchase
I wish there was a way to give this movie zero stars like this movie is comedy the acting sucks!!!! Oh my god everybody in the movie acts dumb and oblivious to every fact it’s hilarious. Nobody in this movie could get themselves to cry i mean it was comedy in itself. One of the worst movies ive ever watched in my entire time on this earth thats not an understatement! No cut scenes, scripts were trash, didnt even give each actor time in between their lines. I get its low budget but my god it sucked oh and lets not forget the camera angles looked like it was straight off instagram or youtube no bs, oh yeah and the cops lol!!! Definitely the main cop you’ll see if you actually watch it all he is very “convincing”. Look i wouldnt watch this bs again if it was the only movie on earth no exaggerating necessary please save your time on this trash everything in here is super extra extra extra extra predictable it sucks i hope every actor & person who had anything to do with this sees this, from the make-up people/ director/ writer/ cameraman everybody you all did a horrible horrendous very suckish job very bad movie very very very bad movie i dont get how its 6/10 that has to be people involved with the movie or family that’s facts because oh my lord very bad movie
3 people found this helpful

Siren SongueReviewed in the United States on September 25, 2021
1.0 out of 5 stars
Who is the Investor?
Verified purchase
This has to be one of the most inspiring films I have seen in a while. Where did these fellows find the money to produce this endeavor: jump shots, poor script writing, depressing, cellphone camera shots, unreal storyline.

Fat Tony actually got shot in the chest by his wife then next scene, he comes limping out into the kitchen to carry out a birthday cake. Say What?! Plus they trying to claim this plump man is pulling all these fine looking females while broke. Come on...that is not how it happens either. And his personality is off, so where is the reality? Everyone getting killed by guys who really don't need to involve themselves in someone else's business. Then the poor, betrayed wife kills the lying side chick and decides the right thing to do next is go to the park because it's a sunny day.

If the producers can find a money source ready to finance this one, I know I can make a movie too. God bless you fellows for inspiring me.
One person found this helpful

Jeron Capone SiegelReviewed in the United States on May 3, 2020
5.0 out of 5 stars
Don't deceive yourself and miss this movie!
Verified purchase
First of all I need to shoutout Renika McQueen! She wrote a great book and the story unfolded visually thrilling! I was impressed with the spirit Renika had on the first day of set! I was the first one there and when she pulled up she instantly welcomed me in and made me a part of the family! Her enthusiasm for the film was at a all time high! She put her all into this movie and it shows! The cast was incredible and they delivered! For me this was historic! To see my name on the big screen and big platform. I'm sure she will produce many more amazing films and I pray that I can be there witness them all! Great story and the director/DP did them shots up! You can't be disappointed! Watch it again! Blessings and lessons!
3 people found this helpful
See all reviews
Back to top
Get to Know Us
Make Money with Us
Amazon Payment Products
Let Us Help You
EnglishChoose a language for shopping. United StatesChoose a country/region for shopping.
© 1996-2021, Amazon.com, Inc. or its affiliates