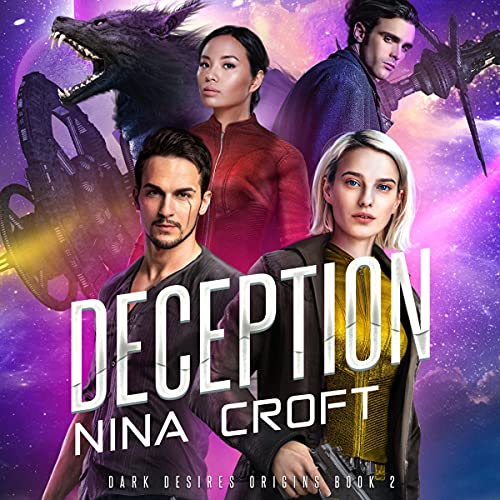 Warlock Milo Velazquez has always dreamed of a day when “monsters” like him don’t have to hide in the shadows. Now, on a planet far from Earth, he’s hoping the old prejudices have been left behind. Though from what he’s seen so far - not a chance.

Their new leader could make life a living hell for Milo and the other immortals illegally transported across the galaxy. Under cover, he scopes out the threat, but he never expected to find a beautiful woman locked in a cell underground. He should ignore her and focus on his mission, but instead he sets her free.

Milo has met all kinds, paranormal creatures and humans, in his centuries of life, but Destiny is like nothing he’s ever encountered before. She’s flawless, and strangely naïve, though she can spout off facts like a walking encyclopedia. He isn’t sure who - or what - she is, or why someone so innocent would be a prisoner.

All he knows is Destiny is different...and finding out why could be their only hope for survival.

Special invitation from Audible!
Learn more about Membership
List Price: $13.99
You Save: $1.75 (13%)
By completing your purchase, you agree to Audible’s Conditions Of Use
Sold and delivered by Audible, an Amazon company
Share

4.4 out of 5 stars
4.4 out of 5
25 global ratings
How are ratings calculated?
To calculate the overall star rating and percentage breakdown by star, we don’t use a simple average. Instead, our system considers things like how recent a review is and if the reviewer bought the item on Amazon. It also analyzes reviews to verify trustworthiness.
Top reviews

VaWineLover
5.0 out of 5 stars Earth is long gone. Can he embrace space?
Reviewed in the United States on November 23, 2020
Loved the second book in this series, though you won't need to have read the first one to follow this one. Milo wakes up to discover his "uncle" Rico abducted him and he has been in cryo sleep for 500 years and is now a long way from Earth, or would be if it still existed. Although his wand, which Rico has confiscated, he can't exact revenge so he may as well see why Rico woke him up. (If you read book one you will know that Rico is a vampire and he also "confiscated" the ship they are on and replaced many of the chosen passengers with vampires, werewolves, and such.)

Destiny awakens, after having been asleep for 322 years, to find their ship has landed on a planet designated as Trakis Four. She knows no one on the vessel except for Dr. Yang and had been told that she is special and must be protected but she has no idea why. She is taken from the ship and finally gets to step onto land, breathe real air, feel sunshine. She also sees a man who catches her attention and causes her skin to tingle. Then she is taken to a castle and locked in a cell - for her protection.

Milo and Dylan, a werewolf, have taken a shuttle to Trakis Four for a meeting with the representatives from the remaing Trakis ships. Each is supposed to inhabit a separate planet in the system. When Trakis One was swallowed up by a Black Hole, their president and other officials were lost and it seems that named Luther Kinross has declared himself in charge, for now. But what exactly is he up to? He conveniently has an army, weapons, and a castle. He also has apparently aligned himself with a religious leader and this sets Milo's teeth on edge. Nothing good has ever come from religion in his opinion.

I will let you enjoy the story for yourself. Lots of mystery surrounds Destiny. Lots of action as Milo and Dylan try to figure out Luther's plans. Lots of heat between Milo and Destiny. Enjoy.

I was given an advanced copy of this book by the author. My review is voluntary.
Read more
One person found this helpful
Helpful
Report abuse

pw reader
5.0 out of 5 stars Adventure/Survival Romance
Reviewed in the United States on November 23, 2020
Deception is the second book in the Dark Desires Origins Series by Nina Croft. This science fiction/fantasy romance story begins as the ships have landed on a new planet. A Brave New World sort to speak. Since it still is run by humans it is still the same in many way. If you thought the politics of 2020 were scary then you will be shuddering to read that life can continue to go downhill. But yet the many quotes at the beginning of the chapters by Alexandre Dumas from The Count of Monte Cristo seem at times hopeful. Some not so much such as -

“In politics, my dear fellow, you know, as well as I do, there are no men, but ideas - no feelings, but interests; in politics we do not kill a man, we only remove an obstacle, that is all.”
—Alexandre Dumas, The Count of Monte Cristo

There is a marriage of sorts between the new ruling powers and a new religion. No more than a cult that is run by the government it was one of the saddest parts of the story. This is a twisted man made version, certainly not the “Love the Lord, and take care of the widows and orphans.” This is a works by following orders religion.

Aside from the politics and corporate church the story which provide plenty of lies and secrets, deception, and open government dominance there are those who will stand against it. These characters are engaging, crafty, colorful, and uniquely supernatural, the superheroes of the book. Within their witty and often cynical dialogue are many references to books, movies, and ideas of today. It was quite entertaining so I found myself looking for these.

Warlock Milo Velazquez finds romance even though he is not looking for it. Destiny wants to love and she wants to love Milo. Their relationship is complicated but passionate. Her role in the new world is one of mystery but it is more then Milo’s better half. Little by little it is revealed.

From the beginning Deception grabbed my attention. Just when I thought I knew what will happen some event changed that prediction. The story is full of twists, turns and surprises. It is a character driven story so that as their emotions played across the pages mine followed suit.

Destiny sums up Deception with “We can’t control where we come from, who our parents are, …. but that doesn’t stop us thinking for ourselves. We can choose what we are. If we can see past the lies that other people tell us.”

An ARC of the book was provided by the publisher through NetGalley which I voluntarily chose to read and reviewed. All thoughts and opinions are my own.
Read more
Helpful
Report abuse

Marta Cox
4.0 out of 5 stars Really enjoyed this and look forward to more set in this world
Reviewed in the United States on November 23, 2020
Having been thoroughly entertained by the original Dark Desires series that mixed sci fi with paranormal I'm truly excited to read these prequel stories that show what happened when humans fled their dying planet. Milo never wanted to travel in space or indeed the future but wakes up to find not only did his uncle put him in cryogenic sleep but he's now woken Milo up in order to find out exactly what is happening with the rest of the fleet. The humans have no idea that supernatural creatures have taken over one of their ships but five hundred years into the future perhaps some of the humans have also been keeping secrets !
Destiny knows her place and has no doubt that she has an important role to play but sadly has absolutely no idea exactly what is expected of her. Awake and on a new planet she's curious and oh so excited to finally start to live but oddly those around seem to want her confined and kept in the dark. What Destiny hadn't expected was for a stranger to quite literally walk in and then out of her cell ! Milo is gorgeous but very different from the few others that Destiny has met but is he exactly what he seems ?
Such a fabulous concept and so very original. I loved seeing Rico the Vampire and even better was the humour that Dylan the Werewolf added to this story. I do think Destiny was a bit clueless at times because to me her purpose was glaringly obvious. However Milo made an intriguing hero with abilities that I would have liked to know more about and I really enjoyed reading this book and look forward to more set in this world.
This voluntary take is of a copy I requested from Netgalley and my thoughts and comments are honest and I believe fair
Read more
Helpful
Report abuse
See all reviews
Back to top
Get to Know Us
Make Money with Us
Amazon Payment Products
Let Us Help You
EnglishChoose a language for shopping. United StatesChoose a country/region for shopping.
© 1996-2021, Amazon.com, Inc. or its affiliates