Deception: Son of a Mermaid - Book Three and millions of other books are available for Amazon Kindle. Learn more
Share <Embed> 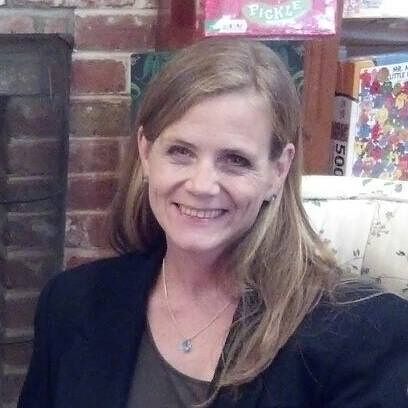 by Katie O'Sullivan (Author)
4.9 out of 5 stars 7 ratings
Book 3 of 3: Son of a Mermaid
See all formats and editions
Sorry, there was a problem loading this page. Try again.

For Shea MacNamara, life under the sea has never been more complicated. Months after being captured, Prince Demyan remains on trial for his crimes while continued unrest stirs among the clans. Tensions mount between Shea and his friends as they unravel lies that bring identities and loyalties into question. The deceptions of both the past and the present have implications for everyone's future. And at the root of everything... the magick that binds the undersea world together.
Read more
Previous page
Next page

Start reading Deception: Son of a Mermaid - Book Three on your Kindle in under a minute.

Katie O’Sullivan is an award winning author with more than a dozen contemporary romance novels and series of young adult books to her name, available online and in stores.

A voracious reader, she loves to read and write second chance stories with strong female characters and hot alpha males. A recovering English major, she earned her degree at Colgate University and now lives on Cape Cod, drinking way too much coffee and finding new uses for the sea glass she obsessively collects along the shore. In addition to writing YA and romantic suspense novels, she has a full time day job at a high tech company. Which explains all the coffee.

Keep up with Katie's latest news on her blog at http://katieosullivan.blogspot.com

Imaginative and well written. I enjoyed every page of Deception. The world building is exceptional and the author makes the underwater kingdoms and royal families come to life in the pages of the Son of a Mermaid series.

Because of the class system and hierarchy, the main character, Prince Shea, will not be allowed to marry his girlfriend, Kae - a mere servant to the royal family. They’ve been together since book one and although they want to be to a couple, Kae’s distress about her societal status keeps her questioning whether or not to remain Shea’s girlfriend. Some of her actions made me question her motives which added some nice tension to the story.

Deception has a cast of strong, determined, and memorable characters including Zan/Xander, a young sorcerer who has a sordid and dark past because of his powerful magic. He’s been used by Prince Demyan to do unimaginable and terrible things with his power and Zan has mental and emotional hardships to overcome in this installment.

Hailey, the drylander girl and good friend to Shea and Kae, provides the teens a place to escape when they need to get away from the strife and politics of the underwater world. She’s the same old Hailey - chatty and full of teen drama - except she’s not exactly the same. No spoilers here, but there are consequences because of what happened to Hailey in the previous book.

This novel has twists and surprises, murder and magic.
Deception has a wonderful action-filled and satisfying ending. But the author left some plot lines open that need finishing - and I can’t wait for the next book!
Read more
One person found this helpful
Helpful
Report abuse

julio
5.0 out of 5 stars My grand son loved it and wants a 4th volume
Reviewed in the United States on August 28, 2019
Verified Purchase
My grand son loved the book so much that he wrote the author to ask for a 4th volume and was gladly surprised to find out that it is already written!
Read more
One person found this helpful
Helpful
Report abuse

Pete Tarsi
4.0 out of 5 stars Interesting character relationships, but would like a bit more action
Reviewed in the United States on January 25, 2018
Back when I first started reviewing books on my blog, I reviewed the first two books in Katie O’Sullivan’s Son of a Mermaid series. I’ve searched for other YA mermaid series to see the similarities and differences from my own. Diving into very different mermaid worlds and mythologies has been an interesting experience, especially when I find stories I enjoy.

In 2015, I read Son of a Mermaid—since rebranded as Descent—and its sequel Defiance. Though it has been more than two years since I read the sequel, I noticed that the third book, Deception, was released last month. Then I was happy to receive a free copy from the author in exchange for an honest review.

The events of this book take immediately following of the second book. Our main characters—mermaid prince Shea McNamara, his mermaid girlfriend Kae (whose family is in service to Shea’s royal family), powerful and conflicted sorcerer Zan, and Shea’s Cape Cod neighbor Hailey—are all in the Aegean Sea area, particularly around Santorini Island in Greece. Most of the initial action occurs underwater in Atlantis, where Prince Demyan is on trial for the crimes he committed in the previous books, before interconnecting them with events on land.

The trial’s not going very well. Shea’s mother the Queen is away, so a key witness is missing. Also, Demyan has one heck of a defense lawyer in the Lord Magistrate, getting him off on some of the charges due to technicalities.

Meanwhile, Shea and Kae’s relationship isn’t going very well. There’s a serious class system in O’Sullivan’s mermaid world, and royalty like Shea isn’t expected or encouraged to enter into romantic relationships with the working class—especially those who work for the royalty—like Kae. This creates some tension between them, and some jealousy as many of the upper class teen mermaids would love the chance to date Shea.

Oh, and Kae has an interesting connection with Zan, due to the circumstances of him saving her life in the previous book. Now, she’s regularly visiting him in jail before he testifies in the trial. Ultimately when Shea finds out, needless to say, he feels a little betrayed and jealous.

And then there’s Hailey, who also had to be rescued and saved from the plane crash in the previous book. She harbored a secret crush on Shea, and… That’s where I’ll end with plot details. I keep my reviews spoiler-free. Instead, I’ll go into what I enjoyed about the book and what didn’t work for me.

It was fun to catch up with these characters after such a long time. Even though these events occur immediately following the previous book, for the most part, the characters have matured. I love when I can see growth in characters across a series. They take accountability for their actions, even regretful accountability in the case of Zan, making their fantasy natures seems more real. In these terms, Zan is once again the standout character for me—he’s got a complexity, especially as he ponders the extent to which he had been manipulated by Demyan and learns that not all relationships have to be that way.

I also liked some of the plot reveals, especially those concerning new character Professor Marcus. His introduction was perhaps the most chilling sequence in the book, and every scene with him was fresh, even when they contained a lot of background information.

Given the title of the book, it’s no surprise that there were many instances of deception, and I appreciated the variety of motives—malicious and protective—involved. However, there was a little too much of it that it surprised me less and less when many of the later secrets in the book were revealed. Also, as some of the individual deceptions led to complications in the ever-growing love polygon (more sides/corners than a triangle), the characters’ individual jealousies and internal questioning about each other’s feelings became repetitive for me.

This is much more of a character-driven book than I remember the previous parts to be. I remembered Defiance (part two) to have more action. In this part, there was a lot of talking—at the trial, discovering information, revealing secrets, and developing a plan—so much that the characters talking had more impact than them doing things.

The overarching conflicts of the two previous parts are resolved within those books, but here, it seems that any final confrontation or resolution is going to happen in the next part. I hope it won’t be as long a wait to part four as it was since part two, as I’m curious to see how all the plot threads play out. Until then, I give Deception FOUR STARS.
Read more
One person found this helpful
Helpful
Report abuse

shawna
5.0 out of 5 stars A Fun YA series!
Reviewed in the United States on July 10, 2018
This is a wonderful addition to the Son of a Mermaid series which I've read from the beginning. O'Sullivan has some beautiful world building in this, as well as intrigue and political scheming, all while still managing to get a hold of the YA voice and tone. I highly recommend to young adults and mermaid lovers alike.
Read more
One person found this helpful
Helpful
Report abuse

janet b.
5.0 out of 5 stars Enthralling "tail"!
Reviewed in the United States on November 18, 2019
Extremely well written! The characters, mystery and action had me hooked throughout! I would love to see this series made into a movie!
Read more
Helpful
Report abuse
See all reviews
Back to top
Get to Know Us
Make Money with Us
Amazon Payment Products
Let Us Help You
EnglishChoose a language for shopping. United StatesChoose a country/region for shopping.
© 1996-2021, Amazon.com, Inc. or its affiliates