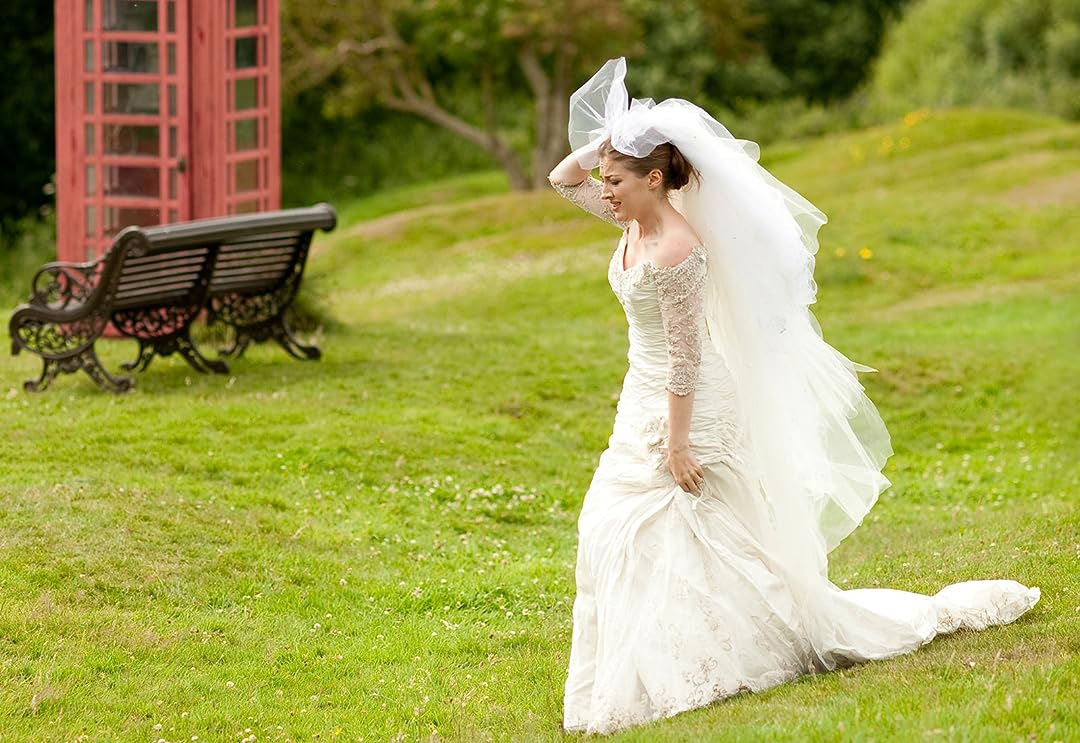 Mama to E & CReviewed in the United States on July 8, 2019
5.0 out of 5 stars
I can't get enough of this movie!
Verified purchase
Okay, this is by no means the best movie ever made. And yes, watching it feels a bit like a guilty pleasure, but this movie is so much fun that I can't stop watching it! David Tennant and Kelley MacDonald are both completely unconventional, awkward, and endearing romantic leads in this movie- you'll root for them, not because they are perfectly fatally flawed, but because they are so completely relatable that you feel like you could show up on Hegg and have a pint with them. While this movie is definitely made for adults (and has a wonderful sense of humor to prove it), it is clean enough that I can watch it with my kids. There's no nudity, sex, foul language (other than a few British curse words, if I remember correctly), or really much of anything untoward, and, if desired, one could argue that there is a moral to the story (if you really want to see one). Unfortunately, I don't feel like I can truly do Decoy Bride justice, so if you like clean romantic comedies with quirky lead actors, then you should give this movie a try.
21 people found this helpful
Report abuse

Pen NameReviewed in the United States on July 6, 2020
5.0 out of 5 stars
This is the kind of film you enjoy watching a second (or even a third) time!
Verified purchase
Kelly Macdonald is perfectly cast as Katie, a pretty Scottish girl returning to the island of Hegg, who then inadvertently finds herself playing the role of a decoy bride for a popular American film star Lara Tyler (Alice Eve), who is engaged to a famous novel writer named James Arber (David Tennant), with the couple endlessly pursued by paparazzi. The chemistry between Katie & James builds slowly, but both are perfect in their respective roles, as is the entire supporting cast! This is a fun film that grows on you, and it also made me actually want to travel to Scotland and see the Outer Hebrides for myself! It's got a sincere charm that can only be described as magical.
4 people found this helpful
Report abuse

BalexanderReviewed in the United States on January 10, 2015
5.0 out of 5 stars
Why 5 stars? Simple, I've watched it more than once!
Verified purchase
I originally watched this via Netflix but purchased it here on amazon (the streaming version). I've read the reviews and trust me the movie is getting better press on Amazon than IMDB and other places. Here's what I say... Fall in love with it's simplicity! The movie offers a repartee that is quite witty and playful. Enjoy the ridiculous characters that only seem to make the movie that much funnier. Give the movie a chance to put a smile on your face, make you giggle, or even laugh out loud! I've watched it a total of 4 times now and each time I've found myself at the very least smiling even though i already know what is about to happen. The only real thing that will impede upon your ability to enjoy this movie is if you can't simply watch a movie for what a movie was meant to do - ENTERTAIN! I'm surprised at all the disparaging reviews as if the movie was written and produced solely to win awards or to become a box office sensation. Give the movie a chance and I believe it will make you smile because Kelly Macdonald - well heck the whole cast - are just plain diverting.
24 people found this helpful
Report abuse

Loose Leaf ReviewsReviewed in the United States on May 30, 2021
5.0 out of 5 stars
Always good for a laugh!
Verified purchase
This is seriously one of my favorite movies. In fact, this is the second copy I've purchased because someone borrowed the other and never returned it. It's full of quotable, laughs, and a bit of heartache. This story has replaced The Princess Bride as my favorite, most-quotable.

"I'm like kryptonite to meant. Kryptonite, dipped in cellulite."
"I've gone man vegan. They say after the first six years that you don't miss them anymore."
"I want to grow old with you. You're beautiful and clever now; it's easy to love you now; but I'll still love you when the wind's dried you out, and when you're old and broken."

JordanReviewed in the United States on August 3, 2020
5.0 out of 5 stars
It’s Worth It
Verified purchase
There are very few rom-coms on my ‘watch over and over’ list, but this is one of them. It’s quirky, funny, sweet, and has some really lovely scenic shots. But the real reason it’s so endearing is the chemistry between David Tennant and Kelly Macdonald. I find most rom-coms tiresome because the female characters tend to be nauseatingly stereotypical and one-dimensional, but Macdonald’s witty character stands on her own, and she and Tennant are wonderful together. I don’t find myself having to ignore cringey bro talk or frustrating stereotypes in order to enjoy this movie.
This certainly isn’t the century’s most high-budget blockbuster, but it’s charming, hilarious, and highly entertaining without being at all vapid or problematic. Truly a gem.
Report abuse

S. LionelReviewed in the United States on July 6, 2012
5.0 out of 5 stars
Grins from ear to ear
Verified purchase
My wife loves all things David Tennant, and when she ran across a mention of The Decoy Bride she asked if we could order it. What I've seen of Tennant I liked, so I agreed and a couple of days later the disc arrived in my mailbox. I wasn't really expecting a lot - romantic comedies aren't often very deep, but they can be a lot of fun. The Decoy Bride delivered fun and more.

First of all, Tennant was perfect as James, the author of an enormous novel set on the (fictitious) Outer Hebrides island of Hegg, but it soon becomes clear that he really knows nothing about Hegg. I had not seen Kelly MacDonald before, but she was delightful as Katie, the last single young woman on the island. The supporting cast was unfamiliar to me as well - yes, I know that some were in very popular TV shows - but they all played their part to perfection.

What really delighted me, though, was that director Sheree Folkson, also new to me, brought a perspective to the film not commonly found with plots similar to this. So you have the beautiful actress Lara, played by Alice Eve, who is to be wed to Tennant's James. In a typical Hollywood take on this theme, Lara would be a shrew, or shallow, generally unpleasant, or some combination of these. But no, Lara is indeed as kind, generous, smart and resourceful as James protests she is. She just isn't the right match for James. Marco the paparazzo stalking Lara, is set up as a sort of villain, but he too has a good heart. Indeed, everyone in this film, even those who do "not so nice" things, has redeeming elements. You can't hate anyone, and things work out for more of the cast than you might normally expect.

In some ways, The Decoy Bride reminds me of the Howard Hawks screwball comedies of the 1930s - smart scripting, enthusiastic acting and just a lot of fun. The beautiful settings, shot on the Isle of Man and in Scotland, are wonderful in their own regard.

The Blu-Ray disc has some extras: one deleted scene (not even worth viewing), interviews with the cast, director and writers (provided in short snippets), some "behind the scenes" shots (which were fun - I noticed that in these one of the cast asked for "a cellphone", but in the actual movie "a mobile" was correctly requested), and a clip about special effects (which were minimal.) The music of the movie was great as well.

My wife and I both enjoyed The Decoy Bride very much. It may seem like just another "rom-com", but it really rises above that. Highly recommended.
22 people found this helpful
Report abuse

Candy KaneReviewed in the United States on September 3, 2013
5.0 out of 5 stars
More then just a chapter long
Verified purchase
As a David Tennant fan I had been eyeing watching this movie. I normally don't do 'chick flicks' for the stuff I watch but since I have prime and it was unlimited free streaming I bit.

I was pleasantly surprised at the story. So surprised in fact I've ordered the blu ray. The movie starts out with showing a loving couple trying to marry but because she's such a big superstar she can't have the private wedding that she wants. Zoom over to a small Scottish island that is middle of know where'sville and we meet the loving heroine of the story played by the delightful Kelly Macdonald (who I recognized the voice as Merida from Pixar's Brave, also one of my favorites). She recently broke up with someone and has moved back with her dying mother.

The woman from the loving couple from earlier has picked the island to have her wedding (because the soon to be husband, David Tennant, wrote a book where it took place on that island). The superstar's stalkerish #1 paperizze fan follows and hi jinks ensue.

All the actors/actress's in this movie come alive and the movie itself has such a wonderful charm about it. It could be watched by the whole family.

I normally don't buy 'chick flicks' (I'm a sci-fi/fantasy/anime girl myself) but I fell in love with this movie.
7 people found this helpful
Report abuse

I am CreeReviewed in the United States on October 13, 2019
3.0 out of 5 stars
Average Romcom, but Relationship Never Gelled
Verified purchase
I think this is my least favorite thing starring David Tenant lol. In general, I felt like the bulk of the film was a lead up to a developing relationship that never really happened. They tried to show it happening, kind of, but it never came together for me, and I never really felt a rhythm or compelling chemistry between the leads. Tenant's character was surprisingly boring, and Tenant was lacking whatever that extra quality is that he usually brings to things. And while MacDonald's character was more interesting and dynamic, she never believably made the transition from a reluctant, sassy, single-by-choice local to an emotionally engaged partner in crime whose growing dynamic you rooted for. That being said, it wasn't by any means bad. If you have time to kill and just want am average romcom, go for it!
Report abuse
See all reviews
Back to top
Get to Know Us
Make Money with Us
Amazon Payment Products
Let Us Help You
EnglishChoose a language for shopping. United StatesChoose a country/region for shopping.
© 1996-2021, Amazon.com, Inc. or its affiliates