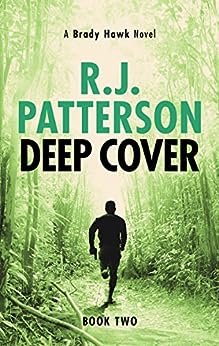 by R.J. Patterson (Author) Format: Kindle Edition
Book 2 of 21: A Brady Hawk Novel
See all formats and editions
Sorry, there was a problem loading this page. Try again.

Deep in the jungles of Sierra Leone, Sefadu Holdings is making a mint by funneling diamonds to Al Hasib in order to fund its terrorist operation. However, when the secret black ops group Firestorm learns about it, Hawk is dispatched to squash the illegal dealings.

While Hawk is battling nefarious forces abroad, his handler Alex Duncan is dealing with her own issues, including making sure that Firestorm director J.D. Blunt is safe from an attack on his life.

As Hawk goes deep under cover, he must figure out a way to stop Al Hasib from getting the diamonds while Duncan fights for her life and the black ops program she believes in.

But when everything starts to unravel, Hawk must find a way to keep it together on both continents or risk losing everything.

What Amazon readers are saying:

★★★★★ “First Strike delivers excitement, intrigue and action from the first page to the last.”

★★★★★ “This story was imaginative, but certainly came across as realistic.”

★★★★★ “If you are looking for some adrenalin packed action, don’t think twice, just grab a copy and start reading, you won’t be sorry.”

★★★★★ “Another great book by R.J. Patterson! I liked that way he makes his characters so real.”

★★★★★ “This book is in the vein of Brad Thor and Vince Flynn with a bit of Ian Flemming.”

DDG22 Sailor
4.0 out of 5 stars Pretty good!
Reviewed in the United States 🇺🇸 on December 5, 2022
Verified Purchase
Nice story, pretty good characters and a pretty fun read. There were a few grammar errors, but it did not detract from the story.
Read more
Helpful
Report abuse

Bookworm Sandy
5.0 out of 5 stars Deep Cover, Deeper Deception?
Reviewed in the United States 🇺🇸 on August 10, 2016
Verified Purchase
At the end of First Strike (Book 1 in this series), off-the-books Firestorm black ops agent Brady Hawk learned a secret that had been kept from him for years and shook his trust in those closest to him to the core. The only person he feels he can truly count on his his handler, Alex Duncan who promised to help him find the truth. As this search goes on in the background, Hawk is sent on a mission to Sierra Leone to deal with a diamond-smuggling local warlord with ties to Al Hasib, the terrorist group Hawk partially disabled in First Strike.

Meanwhile, back in the US, Senator J.D. Blunt, Hawk's recruiter and the power behind Firestorm, has problems of his own. A rival black ops group named Searchlight has suddenly appeared as a rival and possible threat to Firestorm. And a mysterious cabal of the international power elite makes contact with the senator. What is their ultimate goal? Like First Strike, plot twists abound. But in this book, the reader is treated to deeper conspiracies with much higher stakes for all involved. And there is again a final twist that I'm beginning to think is becoming the author's signature touch.

I really liked First Strike, but with Deep Cover, Jack Patterson has upped his game into Robert Ludlum/Jason Bourne territory. Like Bourne, Brady Hawk is searching for answers he may never receive, and with each new entry in the series, every answer he gets only leads to more questions. And more reasons for me, the reader, to keep on reading. It just keeps getting better and better. Another winner!
Read more
9 people found this helpful
Helpful
Report abuse

Michael &Tulay C
4.0 out of 5 stars Good story.
Reviewed in the United States 🇺🇸 on July 30, 2016
Verified Purchase
Alex again working for Firestorm in Republic of Sierra Leone. His mission is to find the missiles and diamonds, also find out about his father. His handler in US is ex CIA Alex. Hawk breaks bones, necks and kills, but also rescues innocent people. He's shot and injured repeatedly but keeps going. Sometimes this makes him little unbelievable character. His boss is intoxicated by power and money, Texas Senator Blunt. Blunt works for The Chamber. Another secret Op's named Searchlight and hacker named Bare Bones. Like what happened to Dr. In Sierra Leone or Searchlight isn't explained, maybe next book will answer these questions.
Read more
One person found this helpful
Helpful
Report abuse

Nancy G
5.0 out of 5 stars Never a dull moment
Reviewed in the United States 🇺🇸 on November 16, 2021
Verified Purchase
It is such fun to read an action packed book and wonder how the characters will prevail again. Eager to read the next in the series.
Read more
Helpful
Report abuse

Layton L Wyman Jr
2.0 out of 5 stars 2nd Book Marginally Better Than First Book
Reviewed in the United States 🇺🇸 on February 3, 2018
Verified Purchase
Tis book was just marginally better that the first one,sure hope the next one is better,once again he is shot in the shoulder and then without any more mention of this wound or the previous one,then he goes right to breaking bad guys neck and fighting and running all over the country and the Dr.gets shot in the back and the blood was gushing out of her back,then you here nothing more about her until you hear that he got funding for her to continue Taking of the people,I gave a 2 star rating,but they don't have a 1 1/4 or 1 1/2 rating.The character development has still not really been development and who even cares about who his father is,I am not interested in a family reunion,I buy books ton read for enjoyment and to hold my interest,and so far these have not.
Read more
One person found this helpful
Helpful
Report abuse

Stick
4.0 out of 5 stars Keeps you wanting more
Reviewed in the United States 🇺🇸 on April 30, 2018
Verified Purchase
Okay I'm hooked on the series. Great marketing to end one book going off to another assignment so you just keep going. Really like the way its all tied in. Good stories and building characters.
Read more
Helpful
Report abuse

Jane
4.0 out of 5 stars Reads a little slow
Reviewed in the United States 🇺🇸 on July 26, 2017
Verified Purchase
The book was good enough that I wanted to finish it but I thought the character development was disappointing and you knew everything that was going to happen. I still gave it 4 stars and look forward to read the next book.
Read more
2 people found this helpful
Helpful
Report abuse

dennis barron
5.0 out of 5 stars Deep Cover. Jack Patterson
Reviewed in the United States 🇺🇸 on July 14, 2017
Verified Purchase
Brady Hawk has a lot of questions he needs answered. Is his employer who he says he is, a Patriot? Or does he use his power for personal gain.. The only person he can really trust us his handler. His mission is to cut off the finances of a terrorist and to locate stolen missiles. A truly fast and highly entertaining read! Action on ever page!!
Read more
One person found this helpful
Helpful
Report abuse
See all reviews

Kindle Customer
5.0 out of 5 stars Excellently written
Reviewed in the United Kingdom 🇬🇧 on December 31, 2022
Verified Purchase
I have been a fan for years and have read all his books. This did not disappoint, Well written and i couldn't put it down.
Read more
Report abuse

D CAMPBELL
5.0 out of 5 stars A Brady good read!
Reviewed in the United Kingdom 🇬🇧 on July 8, 2016
Verified Purchase
A great follow up to the first book in the new Brady Hawk series. A cracking summer read that you just want to find out the ending to the story. Pre ordered Boook 3 and can't wait for it to drop into my kindle.
Read more
Report abuse

Aries 8
3.0 out of 5 stars Very expensive
Reviewed in the United Kingdom 🇬🇧 on April 24, 2017
Verified Purchase
Very expensive for half a book. Good short story though. Why pay for 2 complete chapters from next book. 6/10
Read more
Report abuse