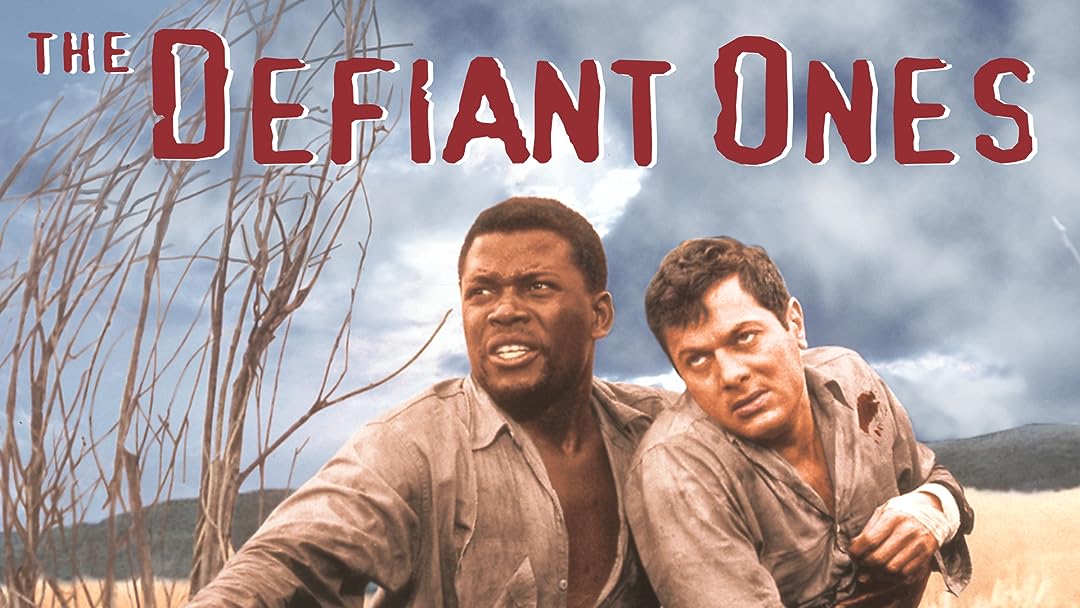 (240)
1 h 36 min195813+
Two convicts (one white, one black) serving time on a chain gang in the deep South are set free by an accident. Seething with mutual distrust, they flee into treacherous woodlands and swamps--hunted by helicopter and bloodhounds. Yet, they are bound together by a common cause...escape...and by a 29-inch steel chain.

Zachary LittrellReviewed in the United States on August 8, 2019
4.0 out of 5 stars
Not every day you're chained to Sidney Poitier
Verified purchase
What makes this movie special is the heavyweight sluggers it nabbed for its lead roles. Sidney Poitier can't help but ooze charisma, a steel-eyed glare that penetrates the horizon. Tony Curtis, meanwhile, has a handsome sliminess to him. You can probably guess with pinpoint accuracy up to 80% of this film. A black man (Sidney Poitier) and a white man (Tony Curtis) break free from a chain gang and have to overcome their prejudices and distrust if they want to make it home before the Law catches up.

But ain't it something when these two guys give each other a look? A shared moment of world-weariness and brow-beaten pride left stark naked? Like two men recognizing something alien, and all-too-familiar, in the other's mug. There's moments in the movie where it feels like these two cons are running through Purgatory, lashing away their former identities, and god only knows what and where they will pop out on the other side.

David M.Reviewed in the United States on August 12, 2019
5.0 out of 5 stars
After 62 years, Film feels like it was made yesterday!
Verified purchase
From 1958, a truly wonderful American Masterpiece given to us by the genius of Stanley Kramer. Impeccable performances from the stars as well as every 'bit player', and a surprisingly effective turn by Lon Chaney as well. That final sentence (in song),at literally the last moment in the film, and that final arm gesture by Sidney Poitier is now firmly etched in my memory. The film feels just as timely today as it was when it first came out, and that's mostly because of it's Oscar Winning Screenplay that carries us the viewer along for one SENSATIONAL ride! Oscar Winning B&W Cinematography as well. If you've never seen this film before folks, it's going to be like 'Film Nirvana from Heaven'!
7 people found this helpful

joel wingReviewed in the United States on February 15, 2021
3.0 out of 5 stars
2 men learn to overcome their differences while fighting for survival
Verified purchase
Sidney Poitier and Tony Curtis are two prisoners who escape from a prison truck and go on the run. The story is about the two having to learn how to get along and overcome their racial differences as they are chained together.

Most of the film is about the two main characters bonding. Curtis is a racist but he only throws that out there at the start. The two coming together doesn’t have any big melodramatic moment where the two talks about being different races and they are both men thankfully. It’s much more natural as they are out in the elements fighting for survival and that’s where they come to rely upon each other. Lon Chaney Jr actually gets the first memorable scene. A mob wants to string up Poitier and Curtis and Cheney confronts them. He asks people individually if they want to kill the two knowing that they only have strength in a group. One thing that stands out is that the soundtrack is mostly Rock N Roll from a transistor radio coming from a member of the posse that is after Poitier and Curtis. The film takes place out in the country and most of what you hear is Rock music providing quite a
3 people found this helpful

KazanReviewed in the United States on August 25, 2019
5.0 out of 5 stars
Good Movie, Very Good...
Verified purchase
Learned a whole lot watching this movie. Thanks. To be honest I didn't know that we were so bad to people whose skin is darker but why? Actually if you think about it Einstein who was the smartest man ever lived was brown so I don't understand why people judge others by their color of skin. Not fair because even Jesus could have been brown because he was a Jew because he was born in Palestine from what I know. This was a good movie. Watch it if you get a chance.
5 people found this helpful

I just want to say that
1.) If Tony was going to walk through the swamp with Sidney, then Sidney could have walked safely through it alone.
2.) the train was long; he could've jumped on it anywhere.

fortuna1Reviewed in the United States on March 25, 2019
5.0 out of 5 stars
A classic
Verified purchase
Many subtle statements about the human condition, loneliness and the desire for peace throughout the movie by the prisoners and those chasing them, including the reluctance of the sheriff to turn the killer dogs loose. Brilliantly acted.
4 people found this helpful

Frederick MazieReviewed in the United States on November 17, 2020
5.0 out of 5 stars
racial relationship
Verified purchase
This tale of black and white convicts chained together was brutally realistic, and much ahead of its time.
3 people found this helpful

Harry BrewerReviewed in the United States on December 24, 2007
5.0 out of 5 stars
The Defiant Ones
Verified purchase
ESSENTIAL MOVIE!!! Here's another great "prison" movie from Hollywood. This one stars Tony Curtis & Sidney Poitier. They are chained together when they make their escape. It's not as simple as it sounds; the movie takes place at an unspecified location in the southern U.S. in the late fifties. This was a very unususl situation, the chaining of white & black together in that period. Of course, the Tony Curtis character is a bigot which makes the escape & survival of the two convicts a very complicated thing.

Sidney Poitier is excellent, he should be recognized as one of America's greatest actors. Mr. Poitier must be given credit for breaking down some of the walls that hindered black actors in those days. Tony Curtis, though not the greatest of actors, does a very credible job in his role, Bronx accent not withstanding. In fact, the characters are so well constructed that the audience feels empathy toward them. Director Stanley Kramer has done one of his best jobs ever. This was a very risky movie to be making in 1958; but the control of the huge movie studios were slipping, and in fact, this was an independent production, which is why this movie got made in that day.

Enjoy a movie that was ahead of its time in 1958. It's not only a good movie, it's also an historically important movie.
9 people found this helpful
See all reviews
Back to top
Get to Know Us
Make Money with Us
Amazon Payment Products
Let Us Help You
EnglishChoose a language for shopping. United StatesChoose a country/region for shopping.
© 1996-2021, Amazon.com, Inc. or its affiliates