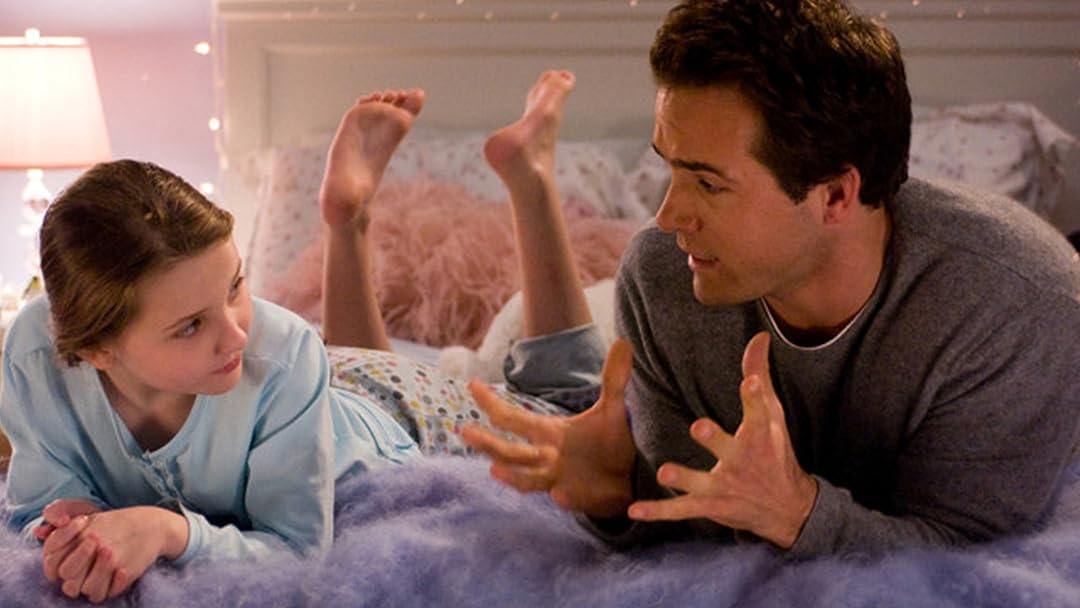 (1,671)7.11 h 52 min2008X-RayPG-13
From the makers of Notting Hill and Love Actually comes this charming romantic comedy about a father who discovers that a second look at the past may lead to a second chance at the future.

MiniReviewed in the United States on August 22, 2019
5.0 out of 5 stars
One of the rom-coms that made me fall in love with NYC life!
Verified purchase
Will Hayes (Ryan Reynolds) is getting a divorce. This isn’t what he wanted from life. He’d wanted to get married and live happily ever after with his wife and daughter (Abigail Breslin). He also wanted to be President of the United States — or at least have a successful career as a political speechwriter. Nothing worked out the way he’d planned. But at least he has partial custody of his daughter Maya, which means he cannot escape her questions and intervention. She wants to know how he and her mother met, and she’s not taking no for an answer. So he tells her — in his own unique way. He tells Maya about his post-college life working for Bill Clinton’s presidential campaign in Manhattan, and the three women who stole his heart. One of those women is Maya’s mom, but which one? And does Maya want to know the truth?

Confession: I love rom-coms. People don’t expect this from me, since I’m an Avoidant Attachment Style, but I don’t watch them for the love story. This was how I fell in love with the city life. Growing up, I sighed at the sight of walking down a manicured Manhattan walkup, or a London flat, or a café overlooking the Eiffel Tower. Lofts with exposed brick. Brownstones near the Brooklyn Promenade. Be still my heart! Is it surprising that I made it my mission to explore those things? Nope. I do my own version of Ryan Reynolds people-watching in bustling New York as he plays music through his earbuds. (Best. Movie Intro. Ever.) And this movie is no exception. The plot is more or less predictable. Out of the three women (Rachel Weisz, Isla Fisher and Elizabeth Banks), we know which one Will loves the most, but the movie still surprises us. Reynolds is gorgeous and funny as usual, and the three actresses are wonderful. Isla Fisher is so talented. Too bad people constantly confuse her with Amy Adams. Watch it if you haven’t already! It’ll make your heart and head spin — and the love story is nice too. :) Five sold iced caramel macchiatos!

Sheryl FechterReviewed in the United States on July 10, 2017
5.0 out of 5 stars
"You're right, it is complicated, isn't it?" - Maya Hayes
Verified purchase
It's a complicated story about who loved whom first and who loved whom last but exactly who is Will's young, ten-year-old daughter, Maya's mother, right now? After all, she just learned in class today where babies truly come from and how they really get there, replete with the correct terminology. She is curious beyond belief within the cavalcade of upset kids and parents after school. Now, her thirty-something father Will Hayes (Ryan Renolds) has to figure out how to tell a mysterious story of three significant women in his life. These all before his daughter was even born and he must tell the PG version for Maya (Abigail Breslin). She asks pertinent questions to figure it all out. With mixed-up names and relationships with each woman, Maya pulls at the clues from her father as to which one of these three very different women of Manhattan is her mother... Maya has Emily (Elizabeth Banks) and April (Isla Fisher) and Summer (Rachel Weisz) to choose from in an oral puzzle that could get anyone all mixed up if we were not seeing it all play out in front of us... Maya is in the dark with no names that she knows, so, how would she know her soon to be divorced from her father - mother's name? These are difficult times to be a kid but with a great and fun Dad who sets her up like a princess in her bedroom to begin his tale. All questions are included and even encouraged in this story. A sweet, endearingly sassy (because of the father/daughter relationship), quizzical, and actually fun movie to watch and rewatch; a little cheeky in parts too. Also, With Kevin Kline in a bitingly sarcastic role as one of the women's professors and she is his girlfriend when Will meets her. He is irreverent and bitingly facetious. The wit which occurs in his role doesn't come along too often so I thought I should mention this great addition to this entertaining film of who's who. The game is on...
5 people found this helpful
Report abuse

WritergirlReviewed in the United States on May 11, 2021
1.0 out of 5 stars
Highly inappropriate sexual content
Verified purchase
Please don’t watch this with your kids. I am eight minutes in, and I cannot keep watching this. I’m not sure where the “charming” part comes in? But so far the whole story is about sex. If the little girl says “thrusting your penis in mom‘s vagina” one more time I’m going to be sick. This girl doesn’t even look like she’s 12 years old.

Everything I read about this movie made it sound like it was going to be a sweet romantic comedy about the father telling his daughter how he met her mother. Instead it seems to be the world’s longest and most inappropriate sex conversation from a little girl. 🧐

No thanks. There’s a big difference between educating children and corrupting them.

teols2016Reviewed in the United States on September 12, 2013
4.0 out of 5 stars
A Love Mystery
Verified purchase
While this film isn't a deep romantic classic like Titanic, it has it's moments that keep you hanging on. It is one of those "guy gets the girl" stories and about halfway through, you'll probably have figured out which girl. Abigail Breslin plays Maya to a tee, but I wonder, with everything we see on screen (and presumibly her father tells her all of this...wonder what her shrink bills are like down the road...she's ten, for God's sake), couldn't she have figured out the "girl" in this story long before she actually did. Ryan Reynolds certainly does well playing a guy who dreamed big and made the effort to make his dreams happen (to a certain extent) and he came off as a guy who could be related to...especially with the girl trouble. I'm not sure which girl was my favorite, but I'll just leave it at that. Like I said early, this film isn't particularly deep, but it's not a complete snooze-fest either. Go out and get it if you're looking for a casual romantic comedy.
2 people found this helpful
Report abuse

A4Q96Reviewed in the United States on November 25, 2009
4.0 out of 5 stars
Really good movie!
Verified purchase
(THIS REVIEW CONTAINS SPOILERS NEAR THE END!!!) I saw this on HBO while on a business trip, sort of against my will, as I couldn't find anything else on TV. I was pleasantly surprised, as it's a really good movie (as long as you aren't overly analytical about it).

Ryan Reynolds plays Will, a 30-something dad with a 10 year old daughter, Maya, (played beautifully by Abagail Breslin). Will is on the verge of divorce from his wife/Maya's mother. Maya is clearly upset by the upcoming split, and an ill-timed sex ed class (isn't 10 a little young for Sex Ed? I've forgotten...) triggers lots of questions for her dad about how he met her mother and why he married her. He proceeds to tell Maya the story of the three women he has loved without disclosing which one is her mother.

Disclaimers:
1) You have to suspend your logic while watching this movie, as Breslin is precocious well beyond her years and asks questions and makes insightful observations many adults don't make.
2) This review has a few SPOILERS in it - not anything you can't figure out, but I some folks don't want to know what happens.

I think there are many things to recommend this film:
1) The chemistry between Will and Maya is great... They play the father/daughter combo with aplomb. Breslin is great (as she was in Little Miss Sunshine).
2) Summer (played by Rachel Weisz) and April (played by Isla Fisher) are great as two of Will's loves. Each plays a perfect character that complements Will. You get a real sense of how he could have ended up with either of them (and almost does, or does).
3) Ryan Reynolds is quite effective as a more complex character - it is a real treat to see Van Wilder's deeper side. It's clear from Reynolds' other roles that he has range. He hasn't picked very many vehicles before this that display it. It suits him.

The biggest issue with the film? (Here's a SPOILER!). Ironically, I was least impressed with Emily (Elizabeth Banks), his college sweetheart. She is the woman who is eventually turns out to be Will's wife/Maya's mom. She seemed shallower than the other two characters, and it was difficult for me to figure out why Will would have married her. While Summer lets him down in pursuit of career advancement, and April seems too mercurial to him and their timing just doesn't match, Emily cheats on Will the first time around with his piggish, chauvinistic roommate Charlie (completely far fetched, unless she is a complete idiot), and then reappears with the weak premise that "maybe our timing was off the first time", which Will inexplicably buys hook, line, and sinker. It leaves me momentarily thinking less of Will. You also cringe at times at Will's "full disclosure" to Maya of his romantic/sex life. It is a bit extensive (even if she did just have a sex ed class) with mentions of threesomes and more detail than most fathers would give their 10 (or 30) year old daughters.

All in all, highly recommended. My wife and I liked it so much we bought it.
One person found this helpful
Report abuse

mlhReviewed in the United States on December 31, 2019
2.0 out of 5 stars
the plot had potential, but overall too sex-oriented for a romcom with a kid as a main character
Verified purchase
the movie sort of devolved into a big entanglement of who-had-sex-with-who and less of a dad telling his child the story of how he met his wife. We didn't make it through the entire movie.
2 people found this helpful
Report abuse

rcp90Reviewed in the United States on December 1, 2013
5.0 out of 5 stars
Better than I expected
Verified purchase
Way better than I was expecting.
I rented this thinking it was just going to be another romantic comedy like every other one I had seen in the past... I was wrong.
I love this movie, it has so much drama and so much character and plenty of sharp witted jokes that Ryan Reynolds plays off so well.
This movie some moments that are unexpected as well and the ending wasn't what I expected either BUT I LOVED THE ENDING
I rented this movie on amazon... But I will be changing that "Rent" status to "OWN"... my movie collection is limited to about 2 shelves and only contains movies that I love and movies that bring real emotions out of me besides just laughing and I will be happy to put it on my shelf.
3 people found this helpful
Report abuse
See all reviews
Back to top
Get to Know Us
Make Money with Us
Amazon Payment Products
Let Us Help You
EnglishChoose a language for shopping. United StatesChoose a country/region for shopping.
© 1996-2021, Amazon.com, Inc. or its affiliates