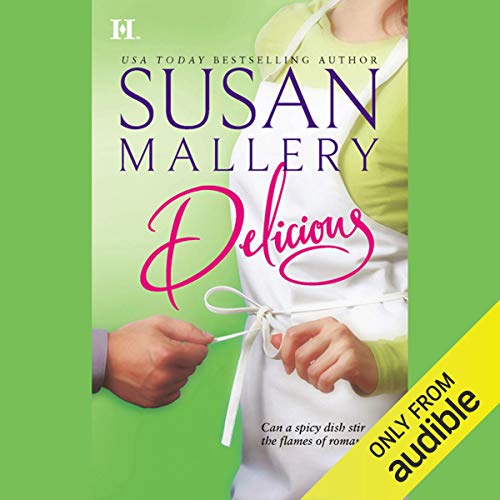 Susan Mallery (Author), Therese Plummer (Narrator), Harlequin Books S.A. (Publisher) & 0 more
4.6 out of 5 stars 435 ratings
See all formats and editions
Sorry, there was a problem loading this page. Try again.
Cal Buchanan needs a top-flight chef to take over his failing Seattle restaurant, The Waterfront. He can afford to hire the best in town, the only problem is that the best happens to be his ex-wife, Penny Jackson.

Penny really needs this opportunity, but she doesn't need the distraction of working with her ex. She's sworn off romance; she's even having a baby on her own. But before she knows it, the heat is on, and the attraction between her and Cal moves from a low simmer to a full boil.

The rest should be easy as pie, but a secret from Dessert Cal's past could spoil everything. Maybe it's true that too many cooks spoil the broth, but then, maybe two are enough to make it irresistible.

Special invitation from Audible!
Learn more about Membership
List Price: $17.95
You Save: $2.24 (12%)
By completing your purchase, you agree to Audible’s Conditions Of Use
Sold and delivered by Audible, an Amazon company

Elle
3.0 out of 5 stars Lackluster hero but enjoyable romance
Reviewed in the United States on April 18, 2015
Verified Purchase
Any book that can combine food and romance has already got me interested, and Delicious delivered. It wasn’t the best romance ever, but it was sweet and charming. I’ve been trying to balance out the wheelbarrows of historicals that I’ve been reading lately with some contemporaries, and Susan Mallery’s name popped up on a list of them.

The plot is simple: Cal owns a restaurant that’s part of the family chain. He needs a new head chef, and the only one that’s good enough just happens to be his ex-wife. Penny, who divorced Cal when he revealed he didn’t want kids (after a heartbreaking miscarriage, to boot), is pregnant through IVF because she didn’t want to wait for a man. Cal not only has to come to terms with his new hire being pregnant, but he has to acknowledge the mistakes he made during their marriage and how he hurt Penny.

Penny is pretty much the best part of Delicious. I love strong female characters, and Penny can hold her own in a male-dominated restaurant kitchen. She’s also smart, sensible, and funny. Unfortunately, she fell for Cal again too quickly, not putting up much resistance after declaring that she was over him. I guess she just has a soft spot where Cal is concerned, even when he’s acting like a total jackass.

Delicious wasn’t a memorable or particularly original book, but it was an enjoyable one. The secondary characters, particularly Reid, Cal’s charming baseball player brother, were a great addition. I can definitely see how this book sets up the rest of the series. While I liked reading Delicious, I’m not sure if I would read another Mallery book again, unless the premise really intrigued me. I guess I’m too spoiled by Jennifer Crusie‘s over-the-top, wise-cracking contemporaries to enjoy a milder romance.

Check out this review and others on my book blog here: https://ellectricbookreviews.wordpress.com/2015/04/17/review-of-susan-mallerys-delicious-buchanans-book-1/
Read more
10 people found this helpful
Helpful
Report abuse

Tommie Morris
5.0 out of 5 stars The Buchanan’s Saga Book 1
Reviewed in the United States on April 20, 2019
Verified Purchase
Susan Mallory is a very well known writer, if you haven’t read her books, then you have been missing out! Not many have not read something she’s written, I would wager! I really liked this book! A very mixed up wealthy family, 4 siblings raised by their domineering grandmother! Much more involved than it sounds! You will love it ! It’s another hit for MsMallory !!
Read more
3 people found this helpful
Helpful
Report abuse

mnix
5.0 out of 5 stars Truly Delicious!
Reviewed in the United States on February 17, 2006
Verified Purchase
Cal Buchanan is in a bind. He needs the best chef money can buy to help him turn around his family's declining restaurant. The Waterfront is in such bad shape it has been temporarily closed until major changes can be made. Affording the best money can buy isn't an issue. The issue is that the best chef for the job in none other than Cal's ex-wife, Penny Jackson.

Penny is very interested in the opportunity The Waterfront offers. By taking this job, she will be able to save enough money to buy her own restaurant. And now that she is pregnant, at least one of her dreams is coming true. If Penny takes this job, she will be well on her way to achieving another of her long held dreams.

Soon things between Cal and Penny start to heat up. Just when it starts to look like they might have another chance at happiness together, a secret from Cal's past threatens their fragile bond.

I've been a fan of Susan Mallery for quite some time. But I will admit, Delicious just blew me away. I started reading it after work and stayed up until dawn to finish it. Cal and Penny's story really captured me. I am a fan of second chances, and Cal and Penny satisfied my hunger for another try at happily ever after.

Although, Cal made me want to take a baseball bat to him a few times, I could easily see Penny's love for him and her unconscious desire to reunite. Not that I don't adore Cal, I do. Ms. Mallery wrote him, and all her characters in this novel, quite wonderfully, realistically, and humanly flawed. I feel like I know them all and already miss hanging out with them!

Of course, I am eager for the other three books in this series. I want happiness for little sister Dani. I think the handsome, tomcat brother, Reid, needs his comeuppance. I want to be around to see that! And the former marine brother, Walker, well... he touched my heart and I am salivating for his book! If you are a fan of contemporary romance, The Buchanans is a series NOT to be missed! I made a glutton out of myself and devoured Delicious!

KathyD
5.0 out of 5 stars great at what she does!
Reviewed in the United States on March 31, 2015
Verified Purchase
Susan Mallery is, simply put, a great classic romance writer. This introduction to the Seattle-based Buchanan Family saga, focusing on the eldest Cal and his tumultuous relationship with his ex Penny, is really well done. It introduces the family so well, clearly outlining each of their personalities without coming across as muddled. Susan lays out the family history, but also focuses on the real heart of the story, which is Cal and Penny. Really interesting scenario, with them being exes, Penny being a chef of renown, hired to save his sinking family restaurant. The twist of her being single and pregnant with her 'sperm-bank' child makes it extra intriguing. Just a splash of sexual spice to keep it lively. A good dose of angst as well, hits all the high points. Gotta read the whole series after this nice intro.
Read more
3 people found this helpful
Helpful
Report abuse

NH Wifey
4.0 out of 5 stars Enjoyable
Reviewed in the United States on March 1, 2015
Verified Purchase
I really enjoy Susan Mallery books. I admired the female lead (Penny) for going after what she wanted in life. I especially liked how she held her own in the confrontations with Cal's grandmother. I had trouble relating to Cal and is obsession with his past (giving up his daughter for adoption when he was just a teenager). Especially when the adoptive parents allowed him to keep up with her life and then to develop a relationship when she got older. I like how Susan develops her characters that will lead into the remaining series. Never the less, I enjoyed the book and look forward to reading the remaining books in the Buchanan series.
Read more
One person found this helpful
Helpful
Report abuse

DAA
3.0 out of 5 stars Delicious
Reviewed in the United States on April 23, 2019
Verified Purchase
This is the first book in this saga. Cal and Penny were married. But after her miscarriage the marriage failed. Between the lies and the family code of secrets this story line was full of manipulation. Now he has hired her to be head chef in the family business. Will more lies and deceit keep them apart forever?
Read more
One person found this helpful
Helpful
Report abuse
See all reviews

Heather McGee
5.0 out of 5 stars Warm and Interesting Story
Reviewed in the United Kingdom on November 18, 2018
Verified Purchase
I read this book a few years ago and really enjoyed it. So much so, I decided to read it again now. I enjoyed it just as much the second time around. It’s an interesting twist on a divorced couple finding love again.
Read more
Report abuse

Kindle Customer
4.0 out of 5 stars love it
Reviewed in the United Kingdom on June 10, 2013
Verified Purchase
i loved the book
it was funny, made me laugth and cry.
will get my mother to read it and try get my friends to read it
one of the books was by one of my favorite authers
Read more
Report abuse

Amazon Customer
5.0 out of 5 stars Brilliant
Reviewed in the United Kingdom on October 11, 2013
Verified Purchase
Highly recommended read - kept you on the edge of the seat as to what was going to happen next. Made me want to read more books by this author. Would deifnitely recommend reading anything by this author
Read more
Report abuse