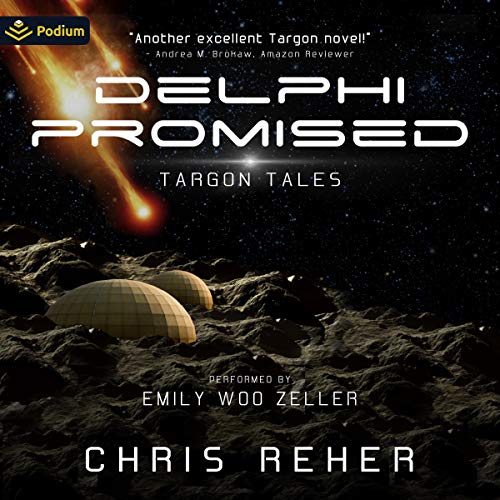 An immense asteroid field is on its way to deliver a torrent of pathogens into this galactic sector, guaranteeing the destruction of any civilization in its path. Cyann, astrobiologist and human-Delphian hybrid, is eager to join the research expedition dispatched to investigate.

Before they depart, she is called upon by the secretive members of a Delphian sect who believe that the elusive Tughan Wai, a supernatural creature of their own making, plays a part in this calamity. Her own genes hold the key to finding the Tughan and so she and her teammates are sent on a separate, secret mission to the outer rim.

She is not prepared when they are stranded among an alien species whose motivations are enigmatic at best. It seems that nothing can be done to stop the lethal asteroid as it barrels into a densely populated region. The mighty Tughan is not their salvation and so Cyann is forced to draw upon the mental aptitudes of her father's people and the intrepid resolve of the humans to find her purpose in this fight for survival.

NoNameHere
5.0 out of 5 stars Don't you just love it when your favourite series continues?
Reviewed in the United States 🇺🇸 on June 28, 2013
Verified Purchase
Thank you, very much, Reher, for answering my prayers....err...I mean hopes! You've written another great piece for this series, and like the ones before, it was an engrossing and pleasurable read.

Nova's no longer the star of this show - her daughter is. She's got the strength, the smarts, and even the stubbornness down pat, just like her mother. But Cyann is not without her flaws. A product of an interspecies union, she struggles with her identity to the point of feeling insecure and 'less-than' her peers. Thankfully, she's got an old friend - and adolescent crush - to show her differently.

Don't get me wrong, though. While the side-romance and family time is enjoyable, it does not detract from the real genre. This book is every bit the space opera/space exploration it's supposed to be. We're thrown into the story from the word go when Cyann and her team are warned by a strange visitor of an upcoming threat to their entire world. Plans are put in place to deal with this threat, and while doing so, new information comes to light about the Tughan Wai (first seen in Only Human - which, though you don't need to read first to enjoy this book, would certainly help if you did).

And now it's on. In true Reher fashion, everyone scrambles and fights to save what's most important to them. The mighty Tughan is not that mighty anymore, and Cyann finds herself struggling between sadly accepting this fact and doing her damnedest to restore him for the sake of their world. A new species is introduced into the culture-rich world of Trans-Targon and whether they're of an inclination to help or hurt is uncertain. Hard decisions as well as sacrifices are made, and through the pacing of this book, one can see that Reher has done their homework on space and biology.

I have rated this book five stars because the author has clearly (and successfully) done their best to provide a great and engaging read. For my own personal enjoyment, I would give this work four stars. I cannot pinpoint why or where, exactly, but for me, it did not have as much oomph as the previous works in the series. In any case, if you love space operas with a cup of adventure, a tablespoon of romance, and a dash of humour, I believe and recommend that you will enjoy this book, too.
Read more
7 people found this helpful
Helpful
Report abuse

Nana
5.0 out of 5 stars Delphi Promised Book 4
Reviewed in the United States 🇺🇸 on January 11, 2021
Verified Purchase
The last Book in this series culminates in the returning of the main characters to take on their biggest challenge. The voice Cyann has heard since her childhood, draws their family into exploring farther than anyone thought would be possible. The contamination on the asteroid has the potential to destroy life on all of the known planets.
Read more
Helpful
Report abuse

zombinis3
4.0 out of 5 stars Good story line
Reviewed in the United States 🇺🇸 on October 18, 2020
Verified Purchase
The entire storyline was intresting from the get go. I do have to admit this one was a surprise because it didn't carry on from the
parents , the story picked up from the childs storyline. She went on a totally different career line which is more likely then her entering the service. Still had face a problem line of her own.
Read more
Helpful
Report abuse

Yola
5.0 out of 5 stars Delphi Promised comes through
Reviewed in the United States 🇺🇸 on January 27, 2014
Verified Purchase
Chris Reher has turned me into a fan. Her imagination is as endless as the night sky. At first blink her ideas may seem outlandish (which, of course, they are). But her space operas become credible when she populates them with characters as flawed and real as the people we meet every day. I think her ideas are visionary. Someday we may actually find keyholes in space through which we can travel vast distances. Five hundred years ago, who envisioned seeing and speaking with another person in real time thousands of miles away. Today it is an ordinary occurrence. I am looking forward to her next installment of the Targon Tales. Although I finished "Delphi Promised" feeling her story was complete, she left many avenues yet to be explored.
Read more
One person found this helpful
Helpful
Report abuse

Kevin
5.0 out of 5 stars Amazing book... amazing series. One of the better authors I've ever read.
Reviewed in the United States 🇺🇸 on June 11, 2015
Verified Purchase
This whole series has been an amazing find. So glad I stumbled across the first book and tried it. The characters are interesting, unique and very well developed as are the story arcs. But, most importantly, the stories are all very entertaining and interesting and because of this all 5 books I've read so far have been serious page turners. Be careful sitting down with these books for an hour or so... you may just find that time shifted while you were in the pages and several hours passed without you noticing.
Read more
One person found this helpful
Helpful
Report abuse

Vanessa
5.0 out of 5 stars Love
Reviewed in the United States 🇺🇸 on January 15, 2014
Verified Purchase
Chris Reher creates a very plausible world, and his characters are fleshed out extremely well. He isn't afraid to show the weak and flawed side of humans as well as showing their strength under pressure. Very nicely done. You fall in love with them and can relate to most of his characters, even the villans. Nova Whiteside is my favourite,and this is the 3rd novel in this series that I read.

KATHLEEN ELLSWORTH
5.0 out of 5 stars Good series.
Reviewed in the United States 🇺🇸 on August 28, 2017
Verified Purchase
Ms. Reher follows her usual style and gives good value for your time. Enough action to keep it interesting and enough quirks to make it worthwhile.
All in all a fun series to enjoy
Read more
Helpful
Report abuse

Paul A. Treaster
5.0 out of 5 stars Enjoyable to read
Reviewed in the United States 🇺🇸 on January 3, 2018
Verified Purchase
I read all of this series and this author is talented. Get all his books you won't be disappointed. This one is the conclusion of the story, so grab book one first.
Read more
Helpful
Report abuse
See all reviews

Peter W
5.0 out of 5 stars I hope that there are more to come in this series.
Reviewed in the United Kingdom 🇬🇧 on August 27, 2020
Verified Purchase
The series is excellent, easy and very entertaining to read. The author sets up the stories and plots to work very well. They are written in a good style that keeps your attention and the pages turning. Sadly this brings you to the end faster. I look forward to another book in this series. In the meantime I will look for and read some of the other books by this author. Keep up the good work.
Read more
Report abuse

Ron Robson
5.0 out of 5 stars Good story and well worth the read
Reviewed in the United Kingdom 🇬🇧 on December 25, 2016
Verified Purchase
I enjoyed this book. Having read the previous books in the series I was sure it would be a good read. It pulled together a number of threads from previis books and set the scene for new adventure and promise. The story was exciting and once I started reading it I could not put it down. Once again the book had about 220 pages. I would have liked it to be longer but then that is just me. I have purchased the bext book and look forward to reading it.
Read more
One person found this helpful
Report abuse

Chris Hawes
5.0 out of 5 stars A wonderful distraction on a boring train ride to work.
Reviewed in the United Kingdom 🇬🇧 on March 19, 2019
Verified Purchase
Well written with engaging storylines from the start, as will all good series, I find myself lost looking for something to replace it.
Read more
Report abuse

Mr Alan F Gilbert
3.0 out of 5 stars Three Stars
Reviewed in the United Kingdom 🇬🇧 on May 18, 2015
Verified Purchase
I like shorter books. I like space opera. This is OK.
Read more
Report abuse