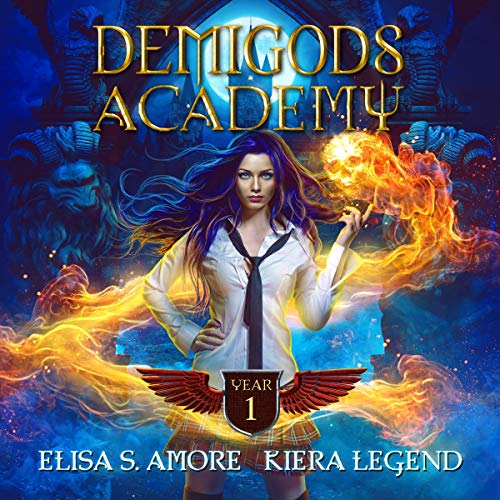 On their 18th birthday, everyone in the world receives a Shadowbox - a magic box that is a gift like no other...because, it’s a gift from the gods. For the majority of people, there’s only a birthday message inside their Shadowbox. For a few chosen, though, there’s something more. Nobody knows what those special guys receive. What’s known is that they disappear and never come back.

Rumors say they are invited to join the gods’ army. I think it’s just a load of crap.

My name is Melany Richmond, and for my entire life, I’ve been an outcast - an orphan tossed around like a ship in a storm. I don’t think that gods really exist. I never even received my Shadowbox when I turned 18. Maybe, because nobody knows my true birth date or because not even the gods care about me. After all, I'm a blue-haired rebel and a troublemaker with tattoos all over my arms.

I’m not like Callie Demos, the beautiful blondie living in the huge estate my adopted mother takes care of. She is the perfect specimen of Greek devotion, and nobody doubts she will get “the call”. She has everything in her life and doesn’t appreciate any of it. Her birthday party is the biggest event in town, and everyone wants to be there when she receives her blessing. To me, it’s just another ridiculous parade. But when I secretly open her Shadowbox and feel its magic on my skin, all my beliefs vanish.

Gods do exist. And if the scroll in my hands says the truth, they have a secret academy where their recruits train to become demigods. I’ve done really bad things in my life but stealing Callie’s opportunity to attend the god’s academy? It’s got to be the worst. If gods find out I’m a faker, what was supposed to be someone else’s gift may turn into my personal curse.

This is a young adult urban fantasy for listeners featuring magic, adventures, and friendship.

Your audiobook is waiting!
Learn more about membership
List Price: $19.95
You Save: $6.96 (35%)
By completing your purchase, you agree to Audible’s Conditions Of Use
Sold and delivered by Audible, an Amazon company
Share

Amazon Customer
5.0 out of 5 stars A Beautiful, Adventitious story.....
Reviewed in the United States on August 2, 2019
I love this book its adventure, romance and it is beautifully written. I love all her books so it doesn't surprise me one bit that I fell in love with this series and its characters and I am so looking forward to reading the 2nd book in this series you did an amazing job with this book Elisa as always. Thanks for an amazing adventure!
Images in this review

Kindle Customer
5.0 out of 5 stars This story has some thing for young and old alike!
Reviewed in the United States 🇺🇸 on August 20, 2022
Verified Purchase
I enjoyed the little twists and turns from beginning to end. It was unpredictable and fun to read. I found myself rooting for the heroine and hero early on, as they used their brains to work out solutions to the challenges that came their way. And, they did it while helping their friends to also achieve their goals .They proved that working together was better and more rewarding for all of them, including their teachers!

I will recommend this to my granddaughters, and their parents. It reinforces what they have been told for awhile now, that females can be strong, resourceful, and smart! They can also be kind and helpful and generous to others. I like the way this series has started, and I cannot wait to see how it goes.

Cnc4ever711
5.0 out of 5 stars Very addicting book to read !!
Reviewed in the United States 🇺🇸 on October 1, 2022
Verified Purchase
I couldn't put this down once I started to read it. This book is good for kids 10 and over. I can't wait to read the rest of the series !!!!
Read more
Helpful
Report abuse

Kindle Customer
5.0 out of 5 stars Fast Paced and Thrillingly Amazing
Reviewed in the United States 🇺🇸 on October 3, 2022
Verified Purchase
Are you fascinated by Greek Mythology? Then this is the book for you! The main character is a badass and the supporting cast is loveable.
Read more
Helpful
Report abuse

Gene
5.0 out of 5 stars Magical
Reviewed in the United States 🇺🇸 on September 6, 2022
Verified Purchase
Great fantasy. I enjoyed the Academy, the different courses, the instructors and their idiosyncrasies. It was amusing reading about some of the mishaps during classes. Rivalry between students, jealousy, friendship and loyalty abound. The twelve trials at the end were fascinating, ingenious. Great book, anxious to read the next in the series. New author for me. I will be reading more of her work
Read more
Helpful
Report abuse

P. S-Decker
5.0 out of 5 stars Wonderful
Reviewed in the United States 🇺🇸 on September 15, 2022
Verified Purchase
I love mythology and this book feeds it. It has your main gods, but also other heroes of mythology. The story is imaginative and exciting. There is friendship, love, danger, betrayal, deception and losses. I can’t wait to read the rest.
Read more
Helpful
Report abuse

Dawn W
5.0 out of 5 stars An interesting story
Reviewed in the United States 🇺🇸 on September 21, 2022
Verified Purchase
An interesting story defined felt a little bit like the best demi gods books ever written. A little bit Harry Potter ish as well as our main heroine does for everyone else!
Read more
Helpful
Report abuse

Amazon Customer
5.0 out of 5 stars amazing read!
Reviewed in the United States 🇺🇸 on September 5, 2022
Verified Purchase
This book was suspenseful and thrilling! I loved every second of it. It ticked all th boxes for me! This is a must read series!!!
Read more
Helpful
Report abuse

Katy
5.0 out of 5 stars Fantastic!
Reviewed in the United States 🇺🇸 on August 24, 2022
Verified Purchase
I really liked this book. These are new authors for me, but the blurb was too good to pass on it. I’m so glad I didn’t as it was fantastic. I may have gone ahead and bought the next 11 books because I liked it so much.
Read more
One person found this helpful
Helpful
Report abuse
See all reviews

hayley williams
5.0 out of 5 stars Gripping
Reviewed in the United Kingdom 🇬🇧 on May 3, 2022
Verified Purchase
It had me hooked from the first chapter. I’m glad I found this series when there’s lots of books out, I don’t know how I would manage to wait for the next instalment otherwise!

Kindle Customer. NanNetteGhee
5.0 out of 5 stars Truth, stolen opportunities, friendship, love and enemies
Reviewed in the United Kingdom 🇬🇧 on October 17, 2019
Verified Purchase
Love both Elisa and Kiera’s work and this book is no exception. Melany took her spoilt cousin’s place and entered the Demigods Academy and from that moment it was all go. A rollercoaster of action, intrigue, friendship, relationships add a few enemies to the plot, a thrilling end to Year One, and what have you got... another great read from fabulous authors. Can’t wait for the release of Demigods Academy Year Two, which I have already on pre order. I highly recommend Demigods Academy Year One and it’s counterpart audiobook to fellow enthusiasts of co writers Elisa S Amore and Kiera Legend I promise, you will not be disappointed, Demigods honour 😊🥰
Read more
Report abuse

jenni
5.0 out of 5 stars Brilliant
Reviewed in the United Kingdom 🇬🇧 on May 19, 2021
Verified Purchase
I really enjoyed reading this one. Melany is an awesome character she is strong, brave and resourceful. She faces each challenge head on. She cares deeply about friends and family and she hates to see them hurt. This makes her even more determined to keep her school family together. Looking forward to the next instalment.
Read more
One person found this helpful
Report abuse

ingrida
4.0 out of 5 stars good book
Reviewed in the United Kingdom 🇬🇧 on October 26, 2021
Verified Purchase
This book appeared as recommendation for be because it supposed to be similar to books I read. Although I love fantasy books, this book wasn’t quite my type of read, I prefer more adult version of these books or at least +16, meanwhile this book would be more for younger readers. Anyway it was good book but I don’t honk I’ll continue with the series
Read more
Report abuse

Kindle Customer
4.0 out of 5 stars Actually fun
Reviewed in the United Kingdom 🇬🇧 on June 10, 2021
Verified Purchase
As I started reading this, all I could think was "oh no. She's just as awful as the other girl in her own way" but as the story developed I realised that wasn't really true. It was very obvious who she belonged to, but still fun getting there.
Read more
Report abuse
See all reviews