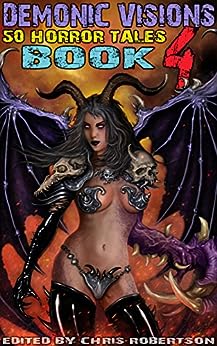 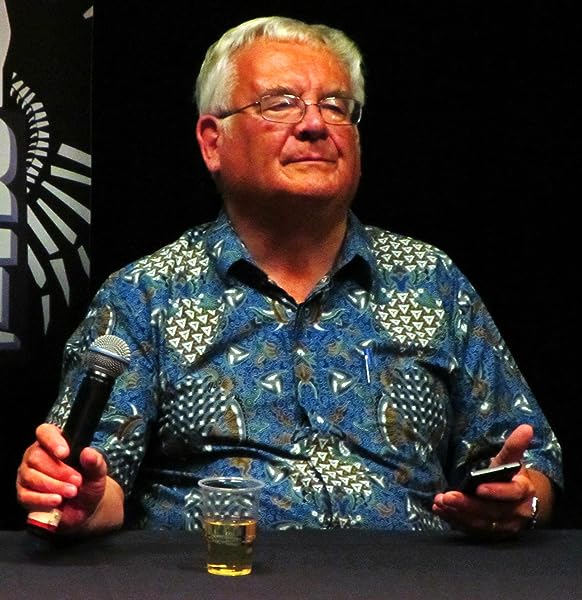 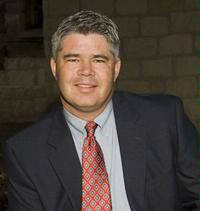 by Ramsey Campbell (Author), Joe McKinney (Author), Matt Drabble (Author), Adam Millard (Author), Sydney Leigh (Author), Patrick Freivald (Author), James Pratt (Author), R.L. Ugolini (Author), Grant Cross (Illustrator), Chris Robertson (Editor) & 7 more Format: Kindle Edition
Book 4 of 6: Demonic Visions 50 Horror Tales
See all formats and editions
Sorry, there was a problem loading this page. Try again.
Welcome to the fourth installment of the Demonic Visions series. This new collection of macabre tales includes short fiction by all members of the Demonic Visions team. Every new book that we publish will take you deeper into the minds of these talented writers, and acquaint you with their various styles of prose. So enjoy, and I hope that you will join us for the entire Demonic Visions saga which is intended to last many, many years and span many, many volumes…
~Chris Robertson, author of Death Dreams Deluxe
Cover art by Grant Cross, artwork on Facebook: Grant Cross Artwork

1. TWELVE VOLT EXISTENCE by Adam Millard
2. TRIGGER WARNING by Patrick Freivald
3. HERO by Joe McKinney
4. LET THE CHILDREN COME TO ME by Justin Hunter
5. THE ZOMBIFICATION OF LESTER NELSON by S.C. Hayden
6. LAST STAND by Matt Drabble
7. THE PRIMA DONNAS by Vince Liberato
8. DEVIL’S BREW by James Pratt
9. FALLING LIKE FLIES by Maggie Carroll
10. FINDERS KEEPERS by Rob Smales
11. THE VIGIL by J. T. Seate
12. SILHOUETTE by Marc Sorondo
13. THE BUS DRIVER by Jody Neil Ruth
14. THE CASTAVAL TRAVELLING CIRCUS by Julianne Snow
15. A CALMING BREEZE OF DEATH by K. Trap Jones
16. MR. PARKER GOES TO SANGRIA by Mark Slade
17. EMPTY HOLLOW by Megan N. Watson
18. THE RAVEN 2 by Christopher Conlon
19. THE EMPTY ONES by James Pratt
20. DRINKS AND A SHOW by Ken MacGregor
21. THAT SOUND OF A HOOK TO THE CAR by Johannes Pinter
22. THE PERSISTENCE OF MEMORY by Chris Leek
23. ICEFREAK by C. L. Hesser
24. HOLE CARD by Devlin Giroux
25. ONE WITH NATURE by Marc Shapiro
26. COMMUNICATION BREAKDOWN by Winifred Burniston
27. MUSE by Peter Adam Salomon
28. THE LEGACY by Julianne Snow
29. THE LONGRIDER by Michael Schomaker
30. TOGETHER FOREVER by Michele Tallarita
31. THE HIGHWAY by Jeff McFarland
32. THE DITCH by Naching T. Kassa
33. THE DECEPTIVE SECURITY OF EVERYDAY NORMALITY by Rick McQuiston
34. CONDEMNED EXISTENCE by Robert Friedrich
35. LUST FOR LIFE by Sydney Leigh
36. THE LEGACY OF CLAN MAG AOIDH by April Bullard
37. APOLOGY ADDICTS by Shaun Avery
38. BOXES by Charles David Bennett
39. RETURN OF THE GREEN GUY by John Alfred Taylor
40. THE MIND OF AN ARTISTE by Raymond Gates
41. TO HELL AND GONE by Mark Slade
42. SOMETHING’S WRONG WITH ETHAN by Doug Robbins
43. PALADIN by Aaron J. French
44. LUNCH TIME by Kerry G.S. Lipp
45. SNAKE SEASON by Rebecca Fung
46. WALK A MILE by Shenoa Carroll-Bradd
47. GYRMKIN by Nicholas Paschall
48. THEODORE by William Holden
49. THE PROTÉGÉ by Arran McDermott
50. THE CHANGE by R.L. Ugolini
51. *Bonus Tale* SECOND SIGHT by Ramsey Campbell
Read more
Previous page
Next page

Next 3 for you in this series See full series
Total Price: $8.97
Books In This Series (6 Books)
Complete Series
Demonic Visions 50 Horror Tales
Kindle Edition
Page 1 of 1Start OverPage 1 of 1
Previous page
Next page

4.0 out of 5 stars
4 out of 5
14 global ratings
How customer reviews and ratings work

BBJ
5.0 out of 5 stars For macabre lovers
Reviewed in the United States on October 16, 2014
Verified Purchase
All demonic visions horror books that contains 50 horror fantasy stores each ( there are 4 books so far ) are a delight for the macabre lover. I can't wait for the next book in this delightful series. Only the best writers in the field are included.
Read more
3 people found this helpful
Helpful
Report abuse

Geo. M.
3.0 out of 5 stars Worth te price with some real gems in here
Reviewed in the United States on October 1, 2014
Verified Purchase
About 50% of the fifty stories in this book are very good. The remainder, not so much. All in all there is a lot of bang for the buck. Short stories are a quick read so the duller stories are over quickly.
Read more
One person found this helpful
Helpful
Report abuse

Frank Tuttle
3.0 out of 5 stars Some pretty good stories here!
Reviewed in the United States on August 29, 2014
Verified Purchase
While not every entry was truly horrific, there were enough good ones to carry the load. A good quick casual read.
Read more
One person found this helpful
Helpful
Report abuse

Brian A
5.0 out of 5 stars more goodies
Reviewed in the United States on October 3, 2014
Verified Purchase
Another great mix of horror tales, from gory to psychological, and everything in between. McKinney breaks away from zombies for a disturbing tale of a different type, while Ugolini gives us another interesting take on a relationship between a wife and her man. All good stuff.
Read more
3 people found this helpful
Helpful
Report abuse

margaret crosser
3.0 out of 5 stars Three Stars
Reviewed in the United States on July 6, 2015
Verified Purchase
Not too bad would have preferred more horror
Read more
Helpful
Report abuse

Kindle Customer
1.0 out of 5 stars One Star
Reviewed in the United States on November 17, 2014
Verified Purchase
Hate anything with child rape
Read more
Helpful
Report abuse
See all reviews

LTM
5.0 out of 5 stars A great deal, this collection is fantastic.
Reviewed in the United Kingdom on September 19, 2014
Verified Purchase
Don't let the cover art fool you, this is a consistently excellent collection of new horror and modern dark fiction.

mrs s watmore
5.0 out of 5 stars Can't get enough of these books
Reviewed in the United Kingdom on August 8, 2016
Verified Purchase
I love these books - working my way through all of them - lots of sleepless nights!!!!
Read more
Report abuse

jamesbennett
4.0 out of 5 stars Four Stars
Reviewed in the United Kingdom on February 19, 2015
Verified Purchase
good read but in some places rather booring
Read more
One person found this helpful
Report abuse
See all reviews